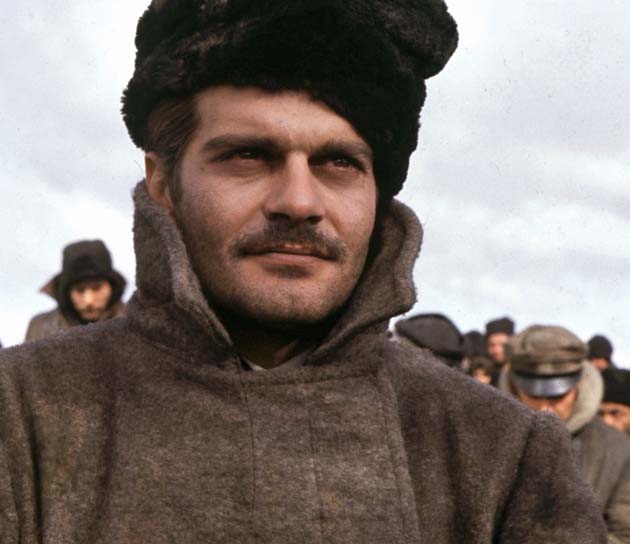 Below is a brief career recap of Egyptian film star Omar Sharif, who died on July 10 and whose credits include the David Lean-directed classics Lawrence of Arabia and Doctor Zhivago.

A future post will offer an overview of the career of peplum (sword-and-sandal movie) actor Jacques Sernas, whose passing earlier this month has been all but ignored by the myopic English-language media.

Like Jacques Sernas’, the death of Omar Sharif at age 83 following a heart attack on July 10 would have been ignored by the English-language media (especially in the U.S.) as well had Sharif remained a star within the Arabic-speaking world. After all, an “international” star is only worth remembering if s/he has toplined at least a couple of major Hollywood movies. And that is something Omar Sharif managed to accomplish.

The Alexandria-born (on April 10, 1932) Sharif began his film career in his native Egypt, where he was first seen in Youssef Chahine’s 1954 socially conscious drama Siraa Fil-Wadi (supposedly translated as “Struggle in the Valley”). About 20 Arabic-language films would follow. Among the most notable titles were:

From that time until the end of the ’60s, Sharif was featured almost invariably in big-budget English-language productions in which he was cast as a Russian, Spaniard, Mongolian, Austrian, and Argentinean, among other nationalities. Most notable among his films of the period were:

Recommended for You
Omar Sharif as Che Guevara in ‘Che!,’ co-starring Jack Palance as Fidel Castro.

Despite Funny Girl, for all purposes a Barbra Streisand star vehicle, near the end of the decade Omar Sharif’s film stardom suffered a couple of major blows:

“Che!, 20th Century Fox’s biography of Ernesto Che Guevara, is important as a reminder that the old Hollywood Dream Factory still has the constitution of a goat,” wrote the New York Times’ Vincent Canby. “It can consume almost anything – including a subject as complex and abrasive as the late Argentine-born Cuban revolutionary – and reduce it to the consistency of strained spinach.” Further down in his review, Canby complains that Omar Sharif “plays Che passively, as a sort of unkempt Dr. Zhivago.”

Despite these setbacks, Sharif would continue to work steadily in the ensuing decades – although he would never recover his former popularity.

In fact, from the early 1970s on, he usually landed major roles in more modest productions and/or box office duds (The Horsemen, The Mysterious Island, The Tamarind Seed, The Puppeteer) and supporting parts or cameos in bigger-budget fare – some popular, some not (Funny Lady, Bloodline, Inchon, Mountains of the Moon).

Below: Omar Sharif discusses ‘Monsieur Ibrahim,’ the Israeli-Palestinian divide and tribalism in the Arab World while lambasting the U.S. and its allies for the Iraq War.

For his performance as a Muslim Turkish shop owner who befriends a Parisian Jewish boy (Pierre Boulanger) in François Dupeyron’s 2003 film version of Éric-Emmanuel Schmitt’s novel and play Monsieur Ibrahim / Monsieur Ibrahim et les fleurs du Coran, Omar Sharif (“I found it very beautiful and kind and gentle”) won the French Academy of Cinema’s César Award and the Audience Award at the Venice Film Festival. That same year, he was presented with the festival’s Career Golden Lion.

Known as an inveterate gambler (“I was always one film behind my debts”), Sharif went on working. In recent years, he narrated Roland Emmerich’s widely panned but popular 10,000 BC, toplining Steven Strait, Camilla Belle, and Cliff Curtis. He was also featured as himself in Valeria Bruni Tedeschi’s A Castle in Italy / Un château en Italie (2013), starring Bruni Tedeschi, Louis Garrel, and Filippo Timi.

Although recently diagnosed with Alzheimer’s disease, Omar Sharif continued acting until not long before his death. He narrates and provides the voice of the grandfather in Ahmed Salim’s animated short 1001 Inventions and the World of Ibn Al-Haytham, which is expected to come out this year.

Omar Sharif’s grandson, sometime actor Omar Sharif Jr., made headlines after publicly coming out as gay in an essay published in the American gay magazine The Advocate. Sharif Jr.’s article was a commentary on the victory of Islamist parties in Egypt’s 2012 national elections. (See also: Image of Omar Sharif Jr. with Kirk Douglas and Melissa Leo at the Academy Awards.)

As per the IMDb, Sharif Jr. has only three films to his credit. The latest one, possibly to come out in 2015, is Jim Sheridan’s The Secret Scripture, starring Rooney Mara, Aidan Turner, Eric Bana, Theo James, Jack Reynor, and Oscar winner Vanessa Redgrave (Julia, 1977).

Note: This Omar Sharif article previously included information on the recently deceased producer Jerry Weintraub and his films (The Karate Kid, Ocean’s Eleven). That can now be found in a post dedicated to Weintraub. See link further below.

Ben Gazzara: ‘Anatomy of a Murder’ & Gay Drama ‘The Strange One’...