Once Upon a Time in the West 1968: Classic Western + Karen Allen Returns

Andre Soares 14 years ago
Once Upon a Time in the West 1968 with Claudia Cardinale.

Sergio Leone’s epic Western Once Upon a Time in the West will be screened as part of the Academy of Motion Picture Arts and Sciences’ Gold Standard screening series on Friday, June 20, at 7:30 p.m. at the Samuel Goldwyn Theater in Beverly Hills.

The screening will mark the West Coast premiere of a new restoration, courtesy of Paramount Pictures, and the 40th anniversary of the film’s Italian release. (The Italo-American Once Upon a Time in the West hit U.S. screens in May 1969.)

I’m no fan of Spaghetti Westerns, and Once Upon a Time in the West is no exception. Had I been Mr. Average Filmgoer back in the 1960s, Clint Eastwood – with whom Leone worked on A Fistful of Dollars, For a Few Dollars More, and The Good, the Bad and the Ugly – would never have become a star.

That said, the mammoth Once Upon a Time in the West merits a big-screen look. For starters, Clint Eastwood is not in it. Former villain Charles Bronson plays the laconic hero, while former hero Henry Fonda plays the most vicious villain west of the rising sun. Rounding out the prestigious cast are Jason Robards, Claudia Cardinale, Gabriele Ferzetti, Paolo Stoppa, Woody Strode, Jack Elam, Keenan Wynn, and veteran Lionel Stander.

Leone approaches the film, from a story by himself, Dario Argento, and Bernardo Bertolucci, in a manner that both builds upon and demolishes the myth of the American West. There are the frontier towns, the brawls, the hangings, the murders, the railroad, the lone ranger, the vistas – all in widescreen. And there are also tons of dust, grime, dirt, blood, and blinding sunlight – all also in widescreen.

The characters – whether hero or villain – look ugly, unkempt, coarse, heartless. Bloodlust, power, greed, revenge, fear are what motivate them. Progress (or what passes for it) will apparently come in spite of those pioneers.

And then Ennio Morricone shows up to transform all that ugliness and nastiness into poetry by way of the most haunting score ever composed for a film.

The restoration of Once Upon a Time in the West was made possible by The Film Foundation and the Rome Film Festival (whose budget may be slashed by Rome’s newly elected right-wing mayor) in association with Sergio Leone Productions and Paramount Pictures. (I do hope they’ve fixed the poor dubbing that rendered some of the film’s dialogue incomprehensible.)

Tickets to Once Upon a Time in the West are $5 for the general public and may be purchased online at www.oscars.org, in person at the Academy box office or by mail. Doors open at 6:30 p.m. The Samuel Goldwyn Theater is located at 8949 Wilshire Boulevard in Beverly Hills. All seating is unreserved. For more information, call (310) 247-3600.

Once Upon a Time in the West 1968 images: Courtesy of the Margaret Herrick Library. 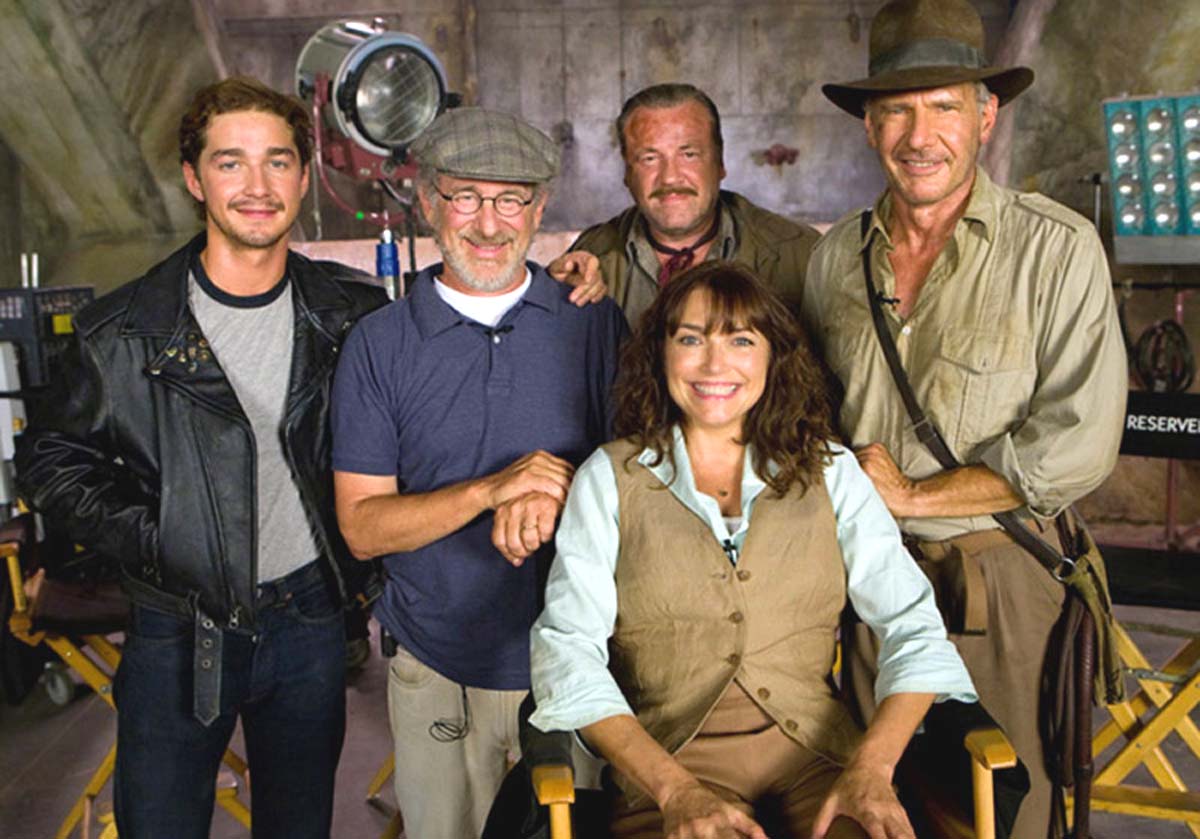 In the Los Angeles Times, Paul Brownfield writes about Karen Allen, 57, once again in the spotlight thanks to Steven Spielberg’s upcoming installment in the Indiana Jones franchise: Indiana Jones and the Kingdom of the Crystal Skull. Though one of the best (and best-looking) actresses of the 1980s, Karen Allen pretty much disappeared from view more than a decade ago. She currently lives in Massachusetts, making sporadic film appearances in mostly small roles and/or little-seen films.

As far as I’m concerned, Karen Allen’s presence is what makes the original Raiders of the Lost Ark watchable – admittedly, one of the most popular movies ever made. And she’s the only reason I’m curious to check out Indiana Jones and the Kingdom of the Crystal Skull.

According to Brownfield’s piece, Allen “had not gotten along at all” with Steven Spielberg while working on Raiders of the Lost Ark. Yet, following an unexpected call from Spielberg not that long ago, Allen drove out to his Manhattan apartment and read the Indiana Jones and the Kingdom of the Crystal Skull screenplay “because she wasn’t permitted to take it home. Just like old times.”

Ultimately, Spielberg’s offer must have been worth her while, as Karen Allen is back as Marion Ravenwood, Harrison Ford’s love interest in the Oscar-nominated 1981 blockbuster. And that’s all for the better.

Raiders of the Lost Ark is Karen Allen’s best-known movie, but despite the fact that she’s just fine as Marion Ravenwood, Allen did much more interesting work elsewhere throughout the ’80s. She’s outstanding as the other woman in Alan Parker’s Shoot the Moon, making it easier to understand why husband Albert Finney would want to leave wife Diane Keaton (who’s also remarkably good). Allen is equally excellent as illegal alien Jeff Bridges’ love interest in John Carpenter’s Starman (1984) and as the shy Laura Wingfield in Paul Newman’s 1987 film version of Tennessee Williams’ The Glass Menagerie, co-starring Joanne Woodward and John Malkovich.

One of the greatest films of the genre, truly operatic in treatment, as the film score gives each major character a leit-motif. Truly epic…

The actors in the movie was rough and tough men.It’s the way the west was,and still is if one find’s the time to travel.Charles Bronson was a great actor,and I think he played the role to a tee.Clint Eastwood is and will always be know as a great actor.One note:all the men in the movie served in the USA armed forces.Just wanted to mentione that.
I love the movie,and just got done watching it again.
Thank you,
Henry Hermiz.

Finally someone had the “stones” to admit that Clint Eastwood is one of the worst actors America ever produced. Charles Bronson and only Charles Bronson could have played the role of “Harmonica”…I wish Sergio Leone could have left Eastwood under whatever rock he found him in.