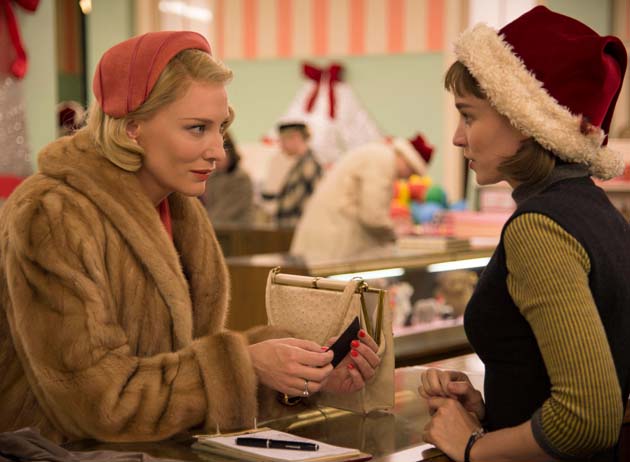 The nominations for the 2015 Online Film Critics Society Awards have been announced. Although as much a lead in Todd Haynes’ Carol as co-star Cate Blanchett, Rooney Mara has been shortlisted in the Best Supporting Actress category.

Not working so well is Focus Features’ campaign for Tom Hooper’s gender-bending biopic The Danish Girl. Long before the film’s opening, pundits were asserting that this year’s Best Actor Academy Award winner Eddie Redmayne (The Theory of Everything) would be a shoo-in 2016 Best Actor Oscar nominee for playing Danish artist Einar Wegener, who underwent one of the first (known) sex-change operations in modern history.

So far, however, The Danish Girl has been all but ignored by U.S. critics’ groups. Its sole mention by the Online Film Critics was a Best Supporting Actress nod for Alicia Vikander – an unusual choice, as Vikander has been generally shortlisted for another of her 2015 roles: the human-looking bot in Alex Garland’s Ex Machina. (This year, she was also seen in the domestic box office bomb The Man from U.N.C.L.E. and in the Bradley Cooper dud Burnt.)

Online Film Critics and the Oscars

As found in its release, the Online Film Critics Society “has nominated the eventual Oscar winner for Best Picture in eight of the last ten years.”

Whether or not that’s a good thing depends on your take on the Academy of Motion Picture Arts and Sciences’ choices.

The Online Film Critics Society 2015 winners will be announced on Monday, Dec. 14.

According to its website, the OFCS has 254 members from 22 countries.

Best Documentary
Amy.
Best of Enemies.
Cartel Land.
Going Clear: Scientology and the Prison of Belief.
The Look of Silence.

Best Animated Feature
Anomalisa.
The Good Dinosaur.
Inside Out.
The Peanuts Movie.
Shaun the Sheep Movie.