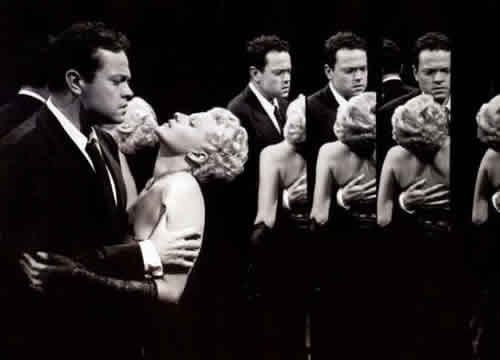 Orson Welles and Rita Hayworth in The Lady from Shanghai.

Orson Welles’ career as an actor was both fruitful and frustrating. From Citizen Kane (1941) to Someone to Love (1987), Welles appeared – mostly in supporting roles – in about 70 features made in various parts of the world. There was one brilliant performance in one brilliant film, Charles Foster Kane in Citizen Kane, but the rest of what I’ve seen has been either forgettable or memorable for the wrong reasons. Subtlety is a quality with which Welles the Actor was generally unfamiliar.

Whether or not you admire Orson Welles’ work in front of the camera, Welles fans are being treated to 13 films featuring Welles as both leading man and supporting player, all day Monday, Aug. 8, on Turner Classic Movies. The only TCM premiere in this “Summer Under the Stars” Orson Welles Day is the 1952 British-made crime drama Trent’s Last Case, directed by veteran Herbert Wilcox, and starring Michael Wilding and the invariably pleasant Margaret Lockwood. (See Orson Welles Movie Schedule further below.)

In Irving Pichel’s melodrama Tomorrow Is Forever (1946), presumed-dead-in-the-war Welles returns home to find wife Claudette Colbert married to George Brent. Had I been Colbert, I’d have killed Welles in his sleep, divorced Brent, and gotten myself a new agent. Dismal fare such as Tomorrow Is Forever is what did Colbert’s stardom in in the late ’40s. As a curiosity: a very young Natalie Wood has a small role in the film.

John Huston’s Moby Dick (1956) is a major bore, only relieved at the end thanks to the white whale jumping about. Gregory Peck is absurdly miscast as Captain Ahab, while Welles has a small supporting role that gives him the chance to say some unintelligible stuff.

Welles’ The Stranger (1946) could have been a great movie if someone had bothered to write a less ludicrous screenplay (credited to Anthony Veiller, adaptation by Decla Dunning and Victor Trivas) and if Welles had cast someone else – instead of himself – as the nasty villain who harasses Loretta Young. As a Nazi war crimes investigator, Edward G. Robinson delivers The Stranger‘s most believable performance.

I’m not a fan of Carol Reed’s The Third Man (1949), considered by many the very best film noir ever made. I find this adaptation of Graham Greene’s novel more confusing than intriguing, leading man Joseph Cotten is his usual uninteresting self, and I’ve never been able to figure out why Welles’ Harry Lime, hiding in the shadows of post-war Vienna, is considered one of the greatest ever villains in film history. Give me Cedric Hardwicke in The Hunchback of Notre Dame, or Madame Konstantin in Notorious, or Edward G. Robinson in The Sea Wolf, or … The list goes on and on.

On the plus side, Alida Valli is always great to watch and Robert Krasker’s black-and-white cinematography is outstanding. I should add that The Third Man‘s beautiful last scene was badly misused by Martin Scorsese in The Departed.

Touch of Evil (1958) is a masterfully directed Welles effort, which features great action scenes, superb black-and-white cinematography (Russell Metty), bizarre camera angles that match the off-kilter storyline, and several first-rate performances. Charlton Heston was never better than here; in fact, Heston was never good, period except in this role as a Mexican (!) narcotics officer out to rescue his kidnapped wife while dealing with border problems that also include murder, drugs, police corruption, and Mercedes McCambridge.

McCambridge, for her part, is great as a macho biker, and so is Marlene Dietrich as a jaded madam. For the first time in her career, Janet Leigh was able to show what a good dramatic actress she could be. As the corrupt cop, however, Welles doesn’t deliver his dialogue; he munches on it. And that’s Touch of Evil‘s loss. Perhaps Arthur Kennedy was unavailable?

The Lady from Shanghai (1948) offers great atmosphere (courtesy of cinematographer Charles Lawton Jr.), but its plot is even more muddled than that of The Third Man and The Big Sleep put together. Minus Gilda‘s long, auburn hair, a blonde Rita Hayworth, Welles’ wife at the time, steals the movie as the steely-hearted, mirror-shattering villainess. Perhaps it’s no coincidence that the Hayworth-Welles marriage was officially shattered in December 1948.

And make sure to pay attention to another Welles on-screen wife, Ruth Warrick, in Citizen Kane. Hers is one of the film’s best and most underrated performances.

6:15 PM MR. ARKADIN (1962) A private eye investigates a millionaire’s mysterious past before a murderer can get to the witnesses. Director: Orson Welles. Cast: Orson Welles, Michael Redgrave, Jack Walting. Black and white. 106 min.

2:00 AM THE LADY FROM SHANGHAI (1948) A romantic drifter gets caught between a corrupt tycoon and his voluptuous wife. Director: Orson Welles. Cast: Rita Hayworth, Orson Welles, Everett Sloane. Black and white. 87 min.

4:00 AM THE IMMORTAL STORY (1968) A sailor bets he can seduce a wealthy man’s wife, not knowing the man has hired a woman to play the role. Director: Orson Welles. Cast: Orson Welles, Jeanne Moreau, Roger Coggio. Color. 62 min. Letterbox Format

So I’d guess you don’t like Orson Welles much. That’s nice.

I couldn’t disagree more about Welles’ performance in A Touch of Evil. I think it is a vile and evil performance that works on all notes. I thought he deserved an Oscar nomination for this performance.