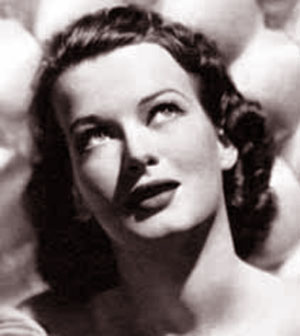 Danish-born actress Osa Massen, a femme fatale in Hollywood films of the 1940s, died at age 91 on Jan. 2 at a convalescent home in Santa Monica, in Los Angeles County. Massen was 91.

Reports claim that the Danish-born Massen (on Jan. 13, 1914, in Copenhagen) was trained as a newspaper photographer (this info, found in the Los Angeles Times obit, may have come from the often unreliable IMDb), but she decided to become a film editor after acting (as Aase Madsen) in the 1935 Danish movie Kidnapped for directors Alice O’Fredericks and Lau Lauritzen.

Stardom failed to arrive, but Massen kept herself busy in supporting roles throughout the following decade. Among her most important films are George Cukor’s 1941 MGM melodrama A Woman’s Face, in which she is blackmailed by a vindictive Joan Crawford; that same year, at Columbia, You’ll Never Get Rich, supporting Fred Astaire and Rita Hayworth; and the following year, at 20th Century Fox, Iceland, as Norwegian skating star Sonja Henie’s sister.

In 1948, she had the lead in Million Dollar Weekend, a B crime comedy directed by actor Gene Raymond (better known as Jeanette MacDonald’s husband), who also starred. For this film, Massen was billed as Stephanie Paull, reportedly so as to differentiate herself from both Ona Munson and Ilona Massey.

Massen’s film career ended in 1950, with Kurt Neumann’s B science-fiction thriller Rocketship X-M, in which Massen, Lloyd Bridges, Noah Beery Jr., and Hugh O’Brien are astronauts who accidentally land on Mars (they were headed for the moon), where they discover the ruins of an ancient civilization.

Massen would continue to work on television throughout the 1950s and early 1960s, appearing in shows such as Wagon Train and Perry Mason.

She was reportedly married three times. One of her husbands was Danish actor Jean Hersholt’s American-born son, Allan Hersholt.

The Single Standard: Garbo Ahead of Her (& Our) Time

I liked Osa Massen! She had a lovely face and accent. I liked her in A woman’s face with Joan Crawford, and # Perry Mason episodes and other tv programs. I thought she was German, then foundout she was Danish.