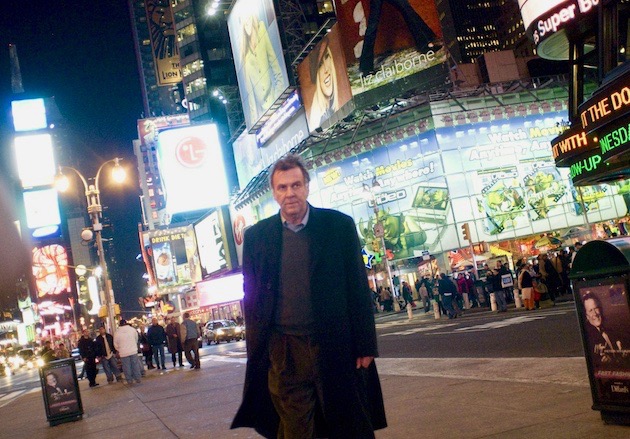 Michael Clayton with Tom Wilkinson: Oscar ballot and the preferential voting system explained. For a movie like Tony Gilroy’s Michael Clayton or an actor like Tom Wilkinson to be shortlisted for the 2008 Academy Awards, each needs to receive at least 1/6 + 1 of the vote in their respective categories, beginning with the top choices, then second choices, and so on. More than one round of Oscar ballot-tallying – i.e., getting to second and perhaps third choices – are likely necessary for the selection of a not insignificant number of Oscar nominees.
Contents hide
1. The (nominations) Oscar ballot explained (in brief): Meet the ‘preferential voting system’
1.1. Key to Oscar ballot tallying
1.2. Minimum & maximum + one & only choice
1.3. One-round voting example
1.4. Minority rule
1.5. Preferential voting system leads to surprises
1.6. Are Academy members aware?
1.7. Is Meryl Streep The Queen of Hollywood?
1.8. Plurality takes all
1.9. Silence = luster
1.10. Oscar Predictions

When it comes to the nominations, how does the Oscar ballot work?

How do members of the Academy of Motion Picture Arts and Sciences make their choices?

How are the eventual nominees – five in most categories – selected?

Using as his sources top people from PricewaterhouseCoopers – that’s the Academy Awards’ accounting firm – Variety‘s Timothy M. Gray attempts to explain “Oscar’s enigmatic ballot” in a few paragraphs. It goes more or less like this:

When voters cast their Oscar ballot, they write down their top five choices per category according to their particular Academy branch – e.g., actors nominate actors, directors nominate directors, film editors nominate film editors, and so on. Just about everyone is allowed to vote for Best Picture.

PricewaterhouseCoopers representatives then sort out each Oscar ballot so they can figure out the five – in some special categories, three – nominees.

How do the PricewaterhouseCoopers people do that?

In accordance with Academy rules, they follow what’s known as the “preferential voting system.”

But what is the “preferential voting system”?

As Gray explains, one key element of the Oscar ballot tallying – and the preferential voting system – is that “the order in which you list your preferences is important. In the first round of ballot-counting, the [PricewaterhouseCoopers] honchos go through all the first choices. If your first choice winds up with a nomination [i.e., with a minimum of 1/6 + 1 of the votes in each category with five available slots], your ballot is set aside.”

Minimum & maximum + one & only choice

Why are at least 1/6 + 1 of the votes necessary for a nomination in the “regular” Oscar categories?

Because that’s the minimum number of votes allowing for a maximum of five nominees. In other words, it’s mathematically impossible to have six nominees, each with 1/6 + 1 of the total voting tally.

Why is the Oscar ballot set aside?

After the Academy member’s choice is added to the roster of nominees, their Oscar ballot is set aside because their voice has officially been heard.

That may sound like a good thing, but that also means the other four choices on each member’s ballot will be duly ignored.

Is that a good idea?

Well, let’s say that 1,000 Academy members voted for this year’s Best Picture Oscar and that only one round of ballot-tallying was needed to decide the five nominees.

Let’s now say that 208 members placed No Country for Old Men as the top choice on their Oscar ballot; 208 other members chose There Will Be Blood, 208 chose Juno, and 207 chose Michael Clayton.

Now, once you add up the votes for these four titles we reach a total of 831 tallied ballots. That means there are now 169 ballots left.

Lo and behold, 168 ballots have Into the Wild as their top Best Picture choice.

And we now have the Academy’s five Best Picture nominees of 2007.

But what about the remaining Oscar ballot?

That lone Academy voter opted for Joe Wright’s international box office hit Atonement as her no. 1 pick. Why? See further below.

Since each Oscar ballot is set aside after one choice is tallied – in the example above, the very first choice – that means each voter’s four other Best Picture selections will be completely ignored.

Let’s say that besides the 168 Academy voters who selected Into the Wild as their top film, only another 20 included it as their second, third, fourth, or fifth choice.

Let’s also say that, besides its lone no. 1 vote Atonement was found in second place on 900 ballots, and in third, fourth, or fifth place on the remaining 99 ballots.

That means the romantic period drama starring Keira Knightley and James McAvoy was listed on every single Oscar ballot. It was the second choice in 90 percent of the ballots.

Even so, in the example above Atonement was not one of the 2007 Best Picture nominees, while Into the Wild – found in 812 fewer ballots – was shortlisted. 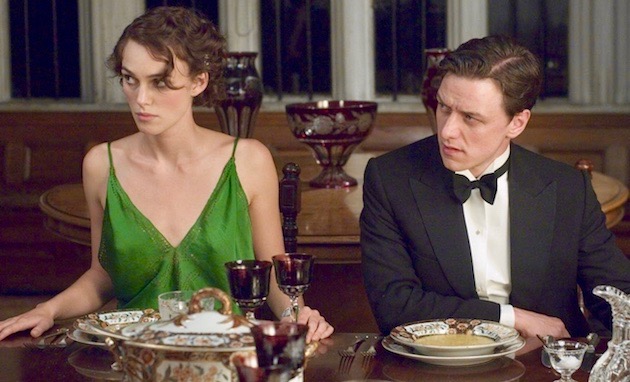 Atonement with Keira Knightley and James McAvoy: Oscar ballot choices vs. the preferential voting system. In our “Oscar ballot explained” example, Joe Wright’s Atonement fails to receive a Best Picture Academy Award nomination even though it is found – in second place – in 90 percent of the ballots. Nominated instead is the less widely – but more wildly – popular Into the Wild. (No bad pun intended.) In real life, will there be enough enthusiastic Academy (Actors Branch) voters to warrant a nomination for Keira Knightley, James McAvoy, Saoirse Ronan, Romola Garai, and veteran Vanessa Redgrave (Best Supporting Actress for Julia, 1977)?

Whether or not you think so, the preferential voting system helps to explain a number of surprises among the Oscar nominations.

And in case you’re wondering about the need for the lone no. 1 vote for Atonement, well, that’s due to an Academy rule requiring that each nominee must have topped at least one Oscar ballot.

Do Academy members know how their votes are tallied?

An understanding of the “Oscar ballot process” would be essential for the vote counting to be a (at least reasonably) fair representation of the members’ preferences.

For instance, do Academy voters know that only one of their five choices will be tabulated? And that most likely that’ll be either their top or second pick?

Is Meryl Streep The Queen of Hollywood?

Lastly, Timothy Gray’s Variety article also tells us that “PWC accountants do not penalize you for spelling mistakes or bad penmanship. But if you offer confusing information – voting for Meryl Streep in The Queen, for example – that vote is thrown out.”

In other words, Academy members shouldn’t drink (or do drugs) and vote.

They also should be able to tell the difference between the various light-haired English-speaking actresses.

Before we wrap this up, it should be noted that the Academy’s preferential voting system is not used to select the winners. On that particular Oscar ballot, Academy members make only one choice per category.

That means a movie or actor or costume designer could theoretically take home an Oscar statuette with only 1/5 + 1 of the total number of votes.

Of course, the PricewaterhouseCoopers people have to keep their mouths shut about the final tallies.

After all, much of the Academy Awards’ luster is the result of (almost) no one knowing exactly how each Academy member fills out their Oscar ballot, or how many votes goes to a specific winner (or nominee).

Additionally, an absolute Oscar victory would look considerably less absolute if it were revealed that the win was the outcome of only a handful of (extra) votes. Perhaps even a single one. In recent years, think Little Miss Sunshine vs. The Departed, Crash vs. Brokeback Mountain, and Million Dollar Baby vs. The Aviator vs. Sideways.

Whether in regard to winners or nominees, keep this possibility in mind next time you blame the 6,000-strong Academy for the idiotic choices of perhaps no more than 600 – or 60 or 6 – members.

Enchanted with Amy Adams. Despite its popularity and generally warm notices, Kevin Lima’s female-centered romantic fantasy Enchanted has been all but ignored this awards season. Equally ignored has been the film’s lead, Amy Adams, a Best Supporting Actress Oscar nominee two years ago for her work in Phil Morrison’s Junebug. Yet Adams is found on our own “Oscar ballot” predictions (see below) as one of the five Best Actress contenders alongside favorites Julie Christie, Marion Cotillard, and Ellen Page – plus Angelina Jolie. Also in the Enchanted cast: Patrick Dempsey, Susan Sarandon, James Marsden, Timothy Spall, and Idina Menzel.

In other Oscar ballot news…

The 2008 Academy Awards have a number of front-runners and near-front-runners: No Country for Old Men and There Will Be Blood for Best Picture; Ratatouille for Best Animated Feature; Joel and Ethan Coen for Best Director(s); Daniel Day-Lewis and George Clooney for Best Actor; Julie Christie, Marion Cotillard, and Ellen Page for Best Actress.

Since Alt Film Guide has received a number of queries and comments about potential Oscar 2008 contenders, we’ve come up with our list of Oscar Predictions in several categories. See below.

Best Film
No Country for Old Men.
There Will Be Blood.
Into the Wild.
Michael Clayton.
Atonement.

Other possibilities: Juno, Sweeney Todd: The Demon Barber of Fleet Street, American Gangster, The Diving Bell and the Butterfly, The Kite Runner.

Other possibilities: Philip Seymour Hoffman, Charlie Wilson’s War; Paul Dano, There Will Be Blood; Max von Sydow, The Diving Bell and the Butterfly.

Best Adapted Screenplay
Joel and Ethan Coen, No Country for Old Men.
Paul Thomas Anderson, There Will Be Blood.
Christopher Hampton, Atonement.
Ronald Harwood, The Diving Bell and the Butterfly.
Sarah Polley, Away from Her.

Other possibilities: Steven Zaillian, American Gangster (though actually “inspired” by a magazine article.)

Other possibilities: Robert Elswit, There Will Be Blood.

Other possibilities: The Simpsons Movie.