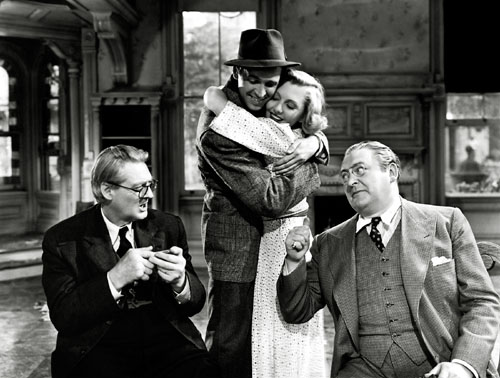 Oscar Best Picture Nominees Major Rules Change: Lionel Barrymore, James Stewart, Jean Arthur, Edward Arnold in Frank Capra’s You Can’t Take It with You, the Best Picture winner of 1938. There were 10 nominees that year, among them The Adventures of Robin Hood, Angels with Dirty Faces, Boys Town, The Citadel, Four Daughters, Jezebel, Pygmalion.

In terms of rules and regulations, this is likely the biggest Oscar news since the mid-1940s:

The 2010 Academy Awards, which will be presented on March 7, will have no less than 10 feature films vying in the Best Picture category. The last time more than five films competed for the Oscars was in 1943, the year Casablanca won for best picture. (Among the losers were The Song of Bernadette, The Human Comedy, The More the Merrier, For Whom the Bell Tolls, and Watch on the Rhine.)

During the Academy’s early years, for more than a decade the Best Picture category included more than five films; for nine years there were 10 nominees. (In 1931/32 there were eight nominees, while in 1934 and 1935 there were 12.)

I’m not sure exactly why the Academy decided to make this major structural change, though considering the show’s lower television ratings and the fact that in recent years voters have tended to go for smaller movies (see this year’s omission of well-regarded blockbusters such as The Dark Knight and WALL-E), the Academy is trying to add to the suspense while ensuring that acclaimed movies with widespread appeal will be included in their Best Picture shortlist. That, in turn, should increase the Oscar ceremony’s TV viewership.

Now, if the Academy’s powers-that-be can make such a major change to their topmost category, why can’t they do the same with the lesser publicized – but no less important in terms of filmmaking – Best Foreign Language Film category? Some (admittedly, major) tweaking in the selection, eligibility, and voting processes would make the best foreign language film nominations both more fair (get rid of the nonsensical one film per country rule) and more representative of the Academy membership (foreign-language films screened in Los Angeles County during the course of the year would be eligible for the award).

And finally, allow nominated foreign-language films to compete in the regular categories the year they open in LA. That’s how it used to be; so, that would be one more opportunity for the Academy to go back to its roots…

The 2010 Academy Award nominations will be announced on Tuesday, February 2.

Unfortunately, the Board of Governors of the Academy of Motion Picture Arts and Sciences has decided to come up with a new annual event to present its special awards – the Irving G. Thalberg Memorial Award, the Jean Hersholt Humanitarian Award and the Honorary Award.

I say “unfortunately” because in my view the presence of veterans like, say, Deborah Kerr or Ennio Morricone, are the highlights of the Oscar ceremony. But then again, perhaps they’ll now find some extra time to add more Hugh Jackman musical numbers for those who are into that sort of stuff.

From now on, special honorees will be selected and announced in September (instead of December); their awards will be presented at a black-tie dinner event in November. At the Academy Awards ceremony, they’ll get only some sort of acknowledgement.

As per the Academy’s press release, “the Academy’s Board will hold a special meeting in September for the sole purpose of selecting the year’s honorees. There will not be more than one Hersholt nor more than one Thalberg Award voted in any given year. No more than four testimonial awards will be given in a single year.”

The Jean Hersholt Humanitarian Award and the Honorary Award are Oscar statuettes; the Irving G. Thalberg Memorial Award is a bust of the legendary MGM producer.

This past June 23, the governors of the Academy of Motion Picture Arts and Sciences approved new rules for the 2010 Academy Awards. In addition to the previously announced change in the Best Picture category which will now include 10 nominees another important change was made in the Original Song category.

As per the Academys press release, “the governors approved the Music Branch Executive Committee recommendation that if no song achieves a minimum average score of 8.25 in the nominations voting, there be no original song nominees and thus no Oscar presented for the category. If only one song achieves the required minimum, it and the song with the next highest score will be deemed the nominees. If two or more songs achieve the minimum score, they will be the nominees though no more than five nominees can be selected. Previously, the rules dictated that there be no more than five but no fewer than three nominees in the category.”

Rules are reviewed annually by individual branch and category committees. The Awards Rules Committee then reviews all proposed changes before presenting its recommendations to the Academy’s Board of Governors for approval.

Academy Award nominations in all categories will be announced on Feb. 2. The 2010 Academy Awards presentation will be telecast live by ABC on Sunday, March 7. 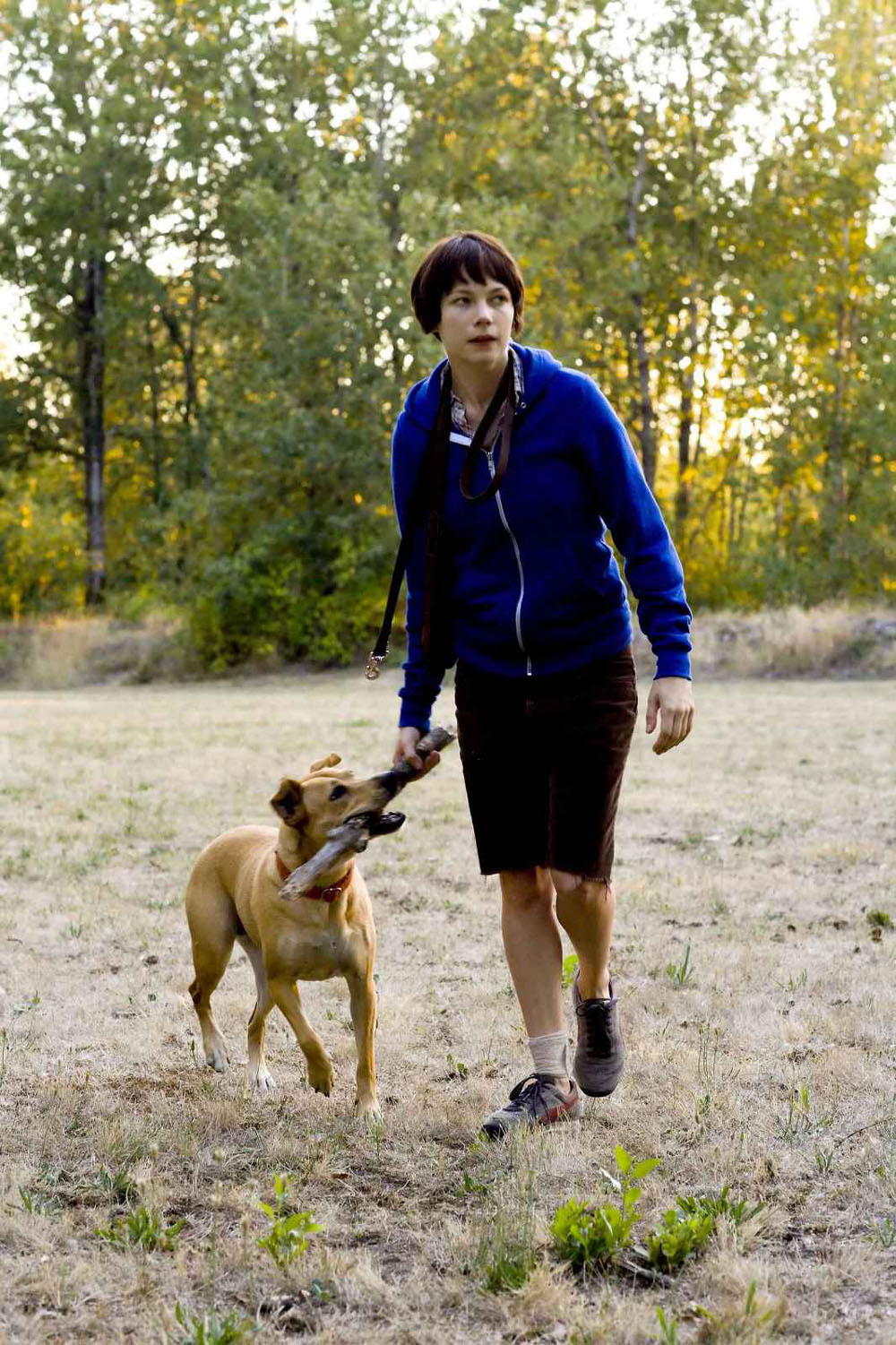 The Academy of Motion Picture Arts and Sciences has invited 134 artists and executives to join its roster in 2009.

As per the Academy’s press release, all the various branches could pick a maximum of 166 new members, but as in the previous years “the several branch committees endorsed fewer candidates than were proposed to them.”

New members will be welcomed into the Academy at an invitation-only reception at the Academy’s Fairbanks Center for Motion Picture Study in Beverly Hills in September.

The Academy’s voting membership has held steady at just under 6,000 members since 2003.

Toni Servillo as Italian Prime Minister Giulio Andreotti in Paolo Sorrentino’s scathing political comedy-drama Il Divo. At the Nastri d’Argento awards ceremony, Sorrentino remarked that if he were to make Il Divo today, and revolving around a woman, it’d certainly be about Veronica Lario. Former actress Lario is right-wing prime-minister Silvio Berlusconi’s soon-to-be former wife, who recently filed for divorce while accusing her family-values proponent husband of being much too interested in some very young women.

Nastro dArgento for Dubbing
Adriano Giannini, the Italian voice of Heath Ledger in The Dark Knight

Set in a small town in southern Morocco, Frédéric Dumont’s Angel at Sea is a coming-of-age tale about a 12-year-old whose life undergoes a radical change after his father tells him an old secret. In addition to winning the Karlovy Vary Film Festival’s Crystal Globe for best film, Angel at Sea also earned its (adult) star, Olivier Gourmet, the best actor award (tied with Paul Giamatti for the soul-stealing comedy Cold Souls). Also in the Angel at Sea cast: Anne Consigny and Martin Nissen.

EAST OF THE WEST
Room and a Half
Director: Andrey Khrzhanovsky
Russia 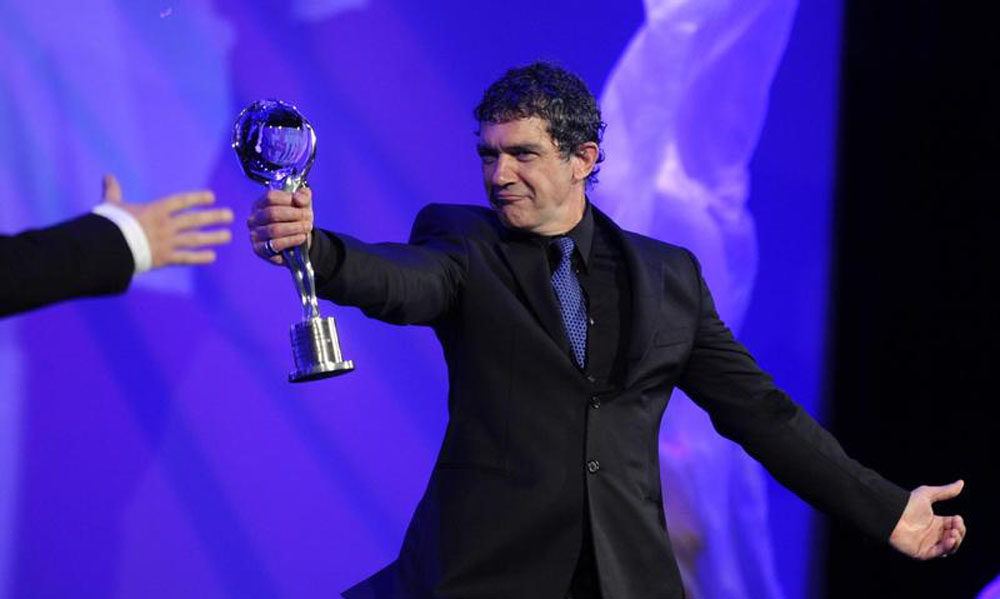 After spending three years at a moon base extracting a gas needed to reverse Earths energy crisis, an astronaut (Sam Rockwell) is about to return to his home planet when he starts seeing and hearing things. His company has apparently come up with an eerie retirement plan of their own.

Audience Award: The Secret of Kells directed by Tomm Moore

Protesting the planned appearance of Uighur-independence activist Rebiya Kadeer, whom the Chinese government blames for the ethnic violence this month between Uighurs and Han Chinese, a hacker has posted a Chinese flag on the Web site of the Melbourne International Film Festival, the New York Times has reported, citing the Associated Press. The ethnic riots in the East Turkistan region left nearly 200 people dead.

The hacker, reportedly a Chinese man offended by Kadeer’s scheduled appearance at the screening of Melbourne-based filmmaker Jeff Daniels’ documentary The 10 Conditions of Love, also left messages in English demanding an apology from festival organizers. The 10 Conditions of Love, which chronicles Kadeer and her family’s struggles against the Chinese government’s oppression, premiered at the festival last night without any disturbances at the screening.

According to a festival spokesperson, there have been hundreds of other attempts to hack the Melbourne festival’s site. Additionally, the Chinese Foreign Ministry spokesperson has lambasted the The 10 Conditions of Love screening, a Chinese diplomat at the consulate in Melbourne has demanded that the film be withdrawn, and four Chinese films have been pulled out of the festival, which has been inundated with e-mails that festival director Richard Moore says are best described as “vile.”

The Melbourne festival’s synopsis of The 10 Conditions of Love explains that two-time Nobel Prize nominee Rebiya Kadeer, at one point one of China’s wealthiest citizens, spent six years in a Chinese prison before being exiled to Washington, D.C. Compounding matters, two of her sons have received lengthy prison sentences.

Kadeer is scheduled to attend the festival at a sold-out screening of The 10 Conditions of Love on Aug. 8. She denies having had any role in the recent ethnic violence.

The Will Smith superhero movie Hancock ultimately became one of 2008’s biggest blockbusters, both domestically and internationally.

Best Presentation on Television
24: Redemption
The Andromeda Strain
Breaking Bad
Jericho
The Last Templar
* The Librarian: The Curse of the Judas Chalice

Art director Lauren Polizzi, whose credits include Transformers: Revenge of the Fallen, Indiana Jones and the Kingdom of the Crystal Skull, and Knocked Up, will be the next guest at the Palm Springs International Film Society’s “Behind the Scenes Filmmaker” series. Polizzi will be present on July 14 at 7 pm at the Rancho Mirage Public Library (71-100 Hwy. 111).

She is currently working on Date Night, a comedy starring Tina Fey and Steve Carell.

Nominated for a 2007 Gotham Award as one of the best undistributed films of the year, Loren Cass is finally scheduled to premiere in New York City on July 24 at the Cinema Village. The film will expand to other major markets during the summer and fall of 2009, before being released on DVD at the end of the year.

Filmed in St. Petersburg, Florida, Loren Cass is set in 1997, when a group of teenagers struggle to rebuild their lives following violent ethnic riots provoked by the (real-life) killing of an 18-year-old black adolescent, who was gunned down by a white police officer.

Hi Lauren, Are you the same Lauren Polizzi who was a fellow traveler on the 1976 Valley Student Tours trip around the US? My good friend Brad Baumann and I met on that tour and we are looking for others who may be interested in celebrating the 40th anniversary of that incredible experience. Evan Sirkin

Hi Just curious as to where your relatives come from and do you know your family line. Kind regards