The 2011 Oscar ceremony rundown has been leaked to Deadline‘s Nikki Finke. Among the revelations are a mystery “guest host” halfway through the show, Mo’Nique’s refusal to present this year’s Best Supporting Actor Oscar, Steven Spielberg presenting Best Picture, and Anne Hathaway undergoing five dress changes. Of course, it would have been more intriguing were Spielberg the one undergoing five dress changes during his Best Picture presentation, but anyhow…

Finke says that Billy Crystal may turn out to be the mystery guest host. So, no Olivia de Havilland or Luise Rainer. Or, even more suitable in our reactionary times, anti-establishmenters Glenda Jackson, Julie Christie, or Vanessa Redgrave. Or Jean-Luc Godard, whose Oscar monologue would likely be in pig Latin.

Godard, an absentee Governors Award recipient late last year, has turned down the Academy’s invitation to show up at the Oscar ceremony. But Eli Wallach, Francis Ford Coppola, and Kevin Brownlow will be there.

A part-black actress, Halle Berry, will introduce a tribute to part-black singer Lena Horne, who was seen in less than 20 films – four of which as a leading lady, a couple of others in supporting roles, and the rest in guest spots. Céline Dion will be heard singing “Smile.”

Oscar winner Patricia Neal (Hud) and two-time Oscar nominee Jean Simmons (Hamlet, The Happy Ending), both of whom also died last year and starred in dozens of movies, will apparently get no such tribute. With luck, you’ll be able to spot Neal and Simmons for a second or two during the “In Memoriam” segment.*

Best Actress Oscar winner Reese Witherspoon (Walk the Line), not Mo’Nique, will present the Best Supporting Actor award. Here’s one Oscar prediction: Witherspoon – or the announcer – will remind viewers that Francis Lawrence’s Water for Elephants, in which she co-stars opposite last year’s Best Supporting Actor winner, Christoph Waltz (and Robert Pattinson), opens in the spring.

Finke doesn’t know who’s presenting Best Supporting Actress, but she asserts that Hilary Swank and Kathryn Bigelow will be handing out the Oscar for Best Director.

In her piece, she also talks about “Scenic Transitions.” These are described as “virtual reality lookbacks” at the first Oscar ceremony, the 1939 multiple Oscar winner Gone with the Wind, the first televised Academy Awards, and so on. Not sure what this actually entails.

One musical number featuring Oscar host James Franco in drag singing “You Haven’t Seen the Last of Me” had to be scrapped for a couple of reasons:

That’s too bad as “too horrible” sounds exactly like the kind of entertainment that might jolt people awake at strategic moments during the three-hour-plus show. You can judge for yourself:

But then again, Banksy, whose Exit Through the Gift Shop is in the running for Best Documentary Feature, may show up in monkey garb. So perhaps all is not lost.

* Update: Actually, Jean Simmons was included in last year’s In Memoriam segment. The organizers had her name superimposed over a picture of Oscar winner Jennifer Jones, who had died in late 2009. 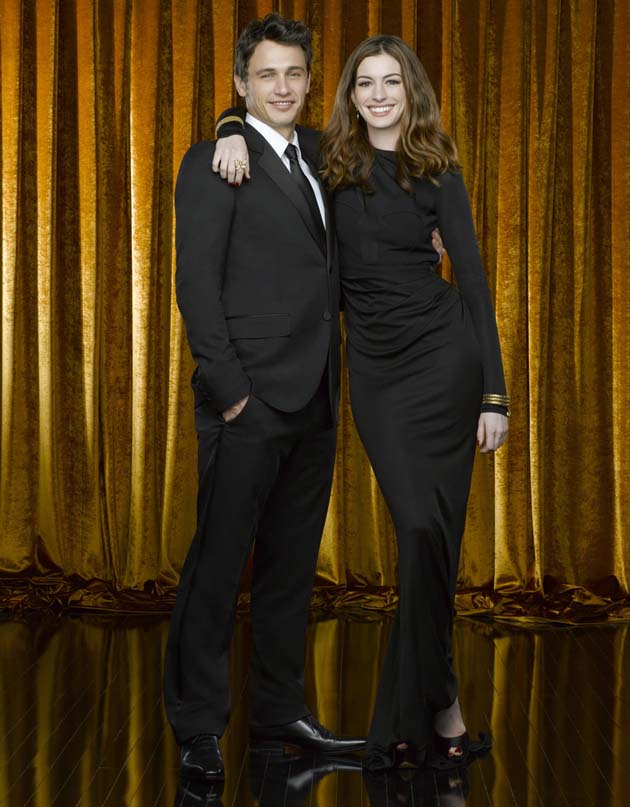 In other news, despite lower television ratings, ABC’s contract to broadcast the Academy Awards ceremony in the U.S. has been extended for six more years, through 2020.

“This contract ensures that the Oscar show will be an ABC tradition for 45 consecutive years,” Academy president Tom Sherak was quoted as saying in the Academy of Motion Picture Arts and Sciences’ press release.

International rights are covered by a separate agreement with Walt Disney International which runs through 2014.

The 2011 Oscar ceremony will take place on Sunday, Feb. 27, at the Kodak Theatre at Hollywood & Highland Center.

“Get ready for the most interactive Academy Awards in history,” says Dave Karger at oscar.com. Coverage begins on Sunday, February 27, at 6 p.m. ET/ 3 p.m. PT. Apparently, online viewers will have to sign in to be able to check out reports from the red carpet, backstage, and even the Governors Ball.

The 2011 Oscar ceremony will take place on Sunday, February 27, 2011, at the Kodak Theatre at Hollywood & Highland Center. In the US, it’ll be broadcast live on ABC. 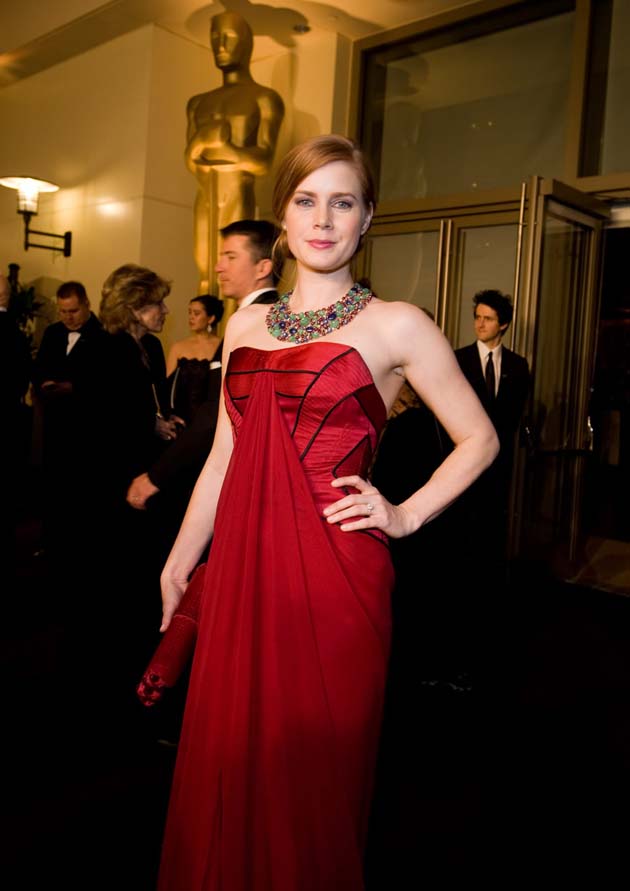 Amy Adams, a three-time Oscar nominee within a six-year span, will be a presenter at the 2011 Academy Awards ceremony.

Adams is in the running this year as Best Supporting Actress for her performance in David O. Russell’s boxing drama The Fighter, also featuring Mark Wahlberg, Christian Bale, and Melissa Leo.

See below the list of Amy Adams Academy Award nominations (updated in 2015).

The 2011 Academy Awards ceremony will take place on Sunday, Feb. 27 ’11, at the Kodak Theatre at Hollywood & Highland Center. In the US, it’ll be broadcast live on ABC.

‘Rio’ Has Biggest Hollywood Opening Ever in Brazil

Lena Horne was ALL black. Both of her parents were African American!

Ok, lets play “who suffered the most and deserves to get recognized for it”. Patricia Neal was a great actress. I loved her in everything I saw her in. She had a great career, or should I say she was “allowed” to have a great career. Had she been black how “great” a career would she have had? In all the films she made, in how many of them were her scenes edited out in order not to offend the good white people of the South? Patricia was allowed the opportunity to GET an academy award. Lena wasn’t, through no fault of her own. Patricia already got her celebration, while she was alive too. Lena had to fight for what she got. This little tribute comes after she’s already gone. It’s really just hollywoods way of saying “sorry” I guess. Late as usual, but most blacks are used to being ignored.

A clarification: I believe Neal deserved a career tribute at this year’s Oscar ceremony because of her *career*, not because of her suffering. (My “suffering” remark was a response to your remark, “She suffered more than any white actress…”)

Also, it’s worth remembering that nearly ten years before Patricia Neal won her Oscar (1963), Dorothy Dandridge was nominated for “Carmen Jones” (1954). That means a number of Academy members picked Dandridge as their Best Actress of the year; else, she’d never have been nominated.

Additionally, Sidney Poitier was nominated in 1958 for “The Defiant Ones” and won the same year as Neal for “Lilies of the Field.” And, of course, there was Hattie McDaniel way back in 1939, for “Gone with the Wind.”

Poitier was honored with a career Oscar nearly a decade ago. Neal never received such an honor. (Most movie women, in fact, haven’t.)

Um, the reason why Lena Horne only appeared in a few films and not as a lead was because she was black. That is not her fault. She suffered more than any white actress yet she still had a great career. What’s sad is that they waited until she died to give her a tribute. Not that she needed it. She was a strong, intelligent, proud black woman. Something Hollywood and you apparently are afraid of.

Implying that I’m either a racist or a misogynist (or both) is laughable. But I’ve heard funnier…

Now, Oscar winner Patricia Neal suffered a stroke that left her severely impaired. One of her children nearly died and suffered serious head trauma after his baby carriage was crushed between a taxi and a bus. And there’s more. But nothing Neal went through would be considered enough suffering because she wasn’t the right skin color? Ah.

Following her massive stroke, Neal not only recovered but went on to earn another well-deserved Oscar nomination. I’ve read her autobiography, and she was a “strong, intelligent” — and quite funny — woman. Not sure if she was proud (I hope she wasn’t), and she certainly wasn’t black. Nor is she as well-remembered today as Horne. And that is the reason Neal isn’t being honored with a special tribute. Unfortunately.