Alt Film Guide 14 years ago
As the saying goes, it’s not over until the fat lady sings. Since Amy Adams is anything but fat, that meant another three hours of Oscar give-aways after her rendition of “Happy Working Song” from Enchanted.

Nearly four hours into the Oscarcast 2008…

And it’s finally over. No Country for Old Men has been voted the best film of 2007.

I must admit that I didn’t really watch the ceremony, except to listen to the announcements of the year’s Oscar winners. For about two seconds, I did, however, check out Amy Adams singing a ditty from Enchanted – I just wanted to take a look at her, who, in my view, should have been one of this year’s five best actress nominees.

And I did watch Jon Stewart’s hilarious introduction. I usually can’t stand Oscar hosts and their tired jokes, but Stewart’s cracks, directed at the (mostly) liberal – or what passes for “liberal” in mainstream society – Hollywood crowd were quite clever. (Too bad he wasn’t around at my gym earlier today to make some cracks at a rabid – and woefully out-of-shape – right-winger, arguing Republican politics instead of lifting weights or doing some much needed cardio.)

Now, earlier this evening at the Kodak Theatre…

Only La Vie en Rose, No Country for Old Men, There Will Be Blood, and The Bourne Ultimatum won more than one award. No Country for Old Men had four wins: best picture, best supporting actor, best director, and best adapted screenplay. The Bourne Ultimatum had three: editing, sound editing, and sound mixing. La Vie en Rose and There Will Be Blood had two each: the former for make-up and actress; the latter for actor and cinematography.

Andrzej Wajda’s Katyn didn’t win the Oscar, but that other World War II/Nazi drama, The Counterfeiters, did. Director Stefan Ruzowitzky remarked that it was appropriate that Austria’s first Oscar win went to a film about Nazis, mentioning Otto Preminger, Billy Wilder, and Fred Zinnemann, three Austrian (I guess they’d have been called Austro-Hungarians at the time they were born) Jews who had to leave the country because of the Nazis.

Indeed, Hollywood benefited greatly from Europe’s anti-Semitism. Preminger, Wilder, and Zinnemann were responsible for some of the most seminal Hollywood movies from the 1940s to the 1970s, among them Laura, The Man with the Golden Arm, and Anatomy of a Murder (Preminger); High Noon, From Here to Eternity, and A Man for All Seasons (Zinnemann); and Double Indemnity, The Lost Weekend, and The Apartment (Wilder).

Elsewhere at the Oscars… 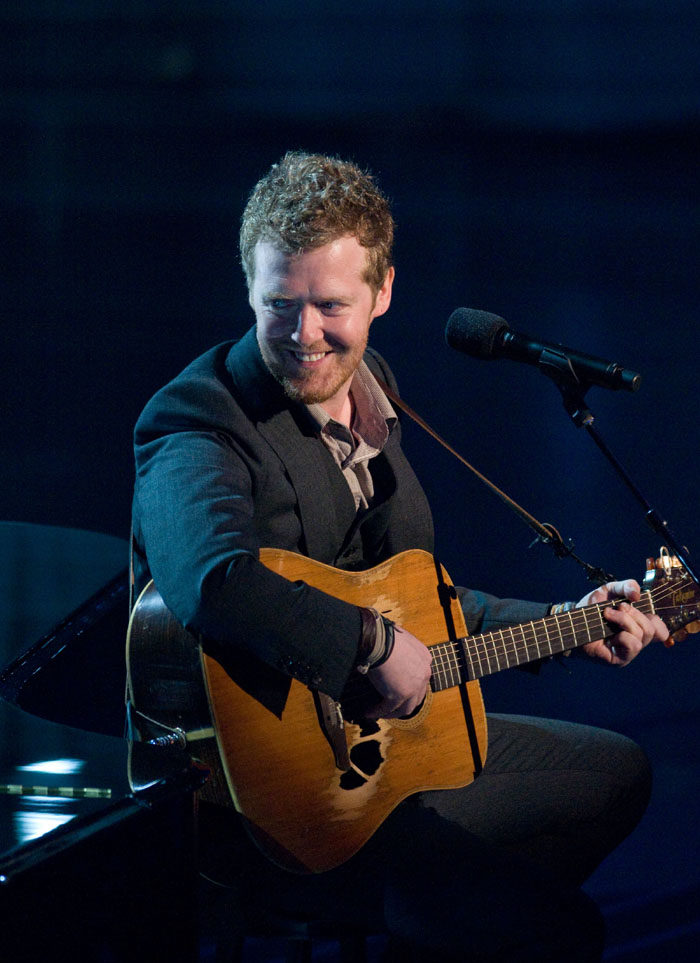 Glen Hansard (right) and Markéta Irglová sang “Falling Slowly” from Once. That’s the song that almost didn’t make it. They later received an Oscar statuette for their composition – a victory that was widely applauded.

I listened to Hansard for a little bit, and later on I noticed that Irglova was talking about hope and “following your dream.” Considering that this seemed to happen after the commercial break, I’m assuming she was brought back to talk (perhaps after being cut off by the orchestra?). If so, I’m also assuming that that’s an Oscar first.

Jack Nicholson presented the Best Picture montage. Can’t help wondering how many of those people present at the Kodak Theatre had ever heard of – let alone watched – All Quiet on the Western Front, the best picture winner of 1930 – which also happens to be infinitely better than any best picture winner of the last decade or so.

Hilary Swank (the silhouette above) introduced the montage featuring those who died in the past year. Most people at the Kodak had probably never heard of Jean-Pierre Cassel or Michelangelo Antonioni, but I’m assuming they all knew Heath Ledger, unsurprisingly the last face shown on the giant screen.

It was an unusually thorough montage, with quite a few non-Hollywood names included, e.g., the aforementioned Cassel and Antonioni, plus Ousmane Sembene, Ingmar Bergman, and Jean-Claude Brialy, and a number of behind-the-scenes talent, from stuntmen to agents. All those in addition to the expected movie stars of yore, of course, among them Deborah Kerr, Laraine Day, Barry Nelson, Jane Wyman, Lois Maxwell, et al.

Addendum: But not Brad Renfro, as a friend has just reminded me. How come?

The elder Rouse, who died in 1987, directed one of my favorite Westerns, The Fastest Gun Alive (1956), a psychological duel-to-the-death tale of a quite talented gunslinger (Glenn Ford) who is afraid of getting shot at – but who is thoroughly sympathetic, nevertheless. Talk about subverting the genre…

The second biggest surprise was Marion Cotillard’s win. I was expecting Julie Christie. In fact, I wanted Julie Christie, though Cotillard (right) was surely just as deserving. Cotillard, who now apparently believes in angels (she said as much in her very emotional acceptance speech), also won the French Academy’s César a couple of nights ago. (I still say they should have an Oscar for Best Accent, given to people like Marion Cotillard.)

For the books: Cotillard is only the third individual – and the first native French speaker – to win an Oscar for acting in a non-English-language film. The other two are Italians Sophia Loren, for Two Women (1961), and Roberto Benigni, for Life Is Beautiful (1998).

The third biggest surprise was Alex Gibney’s Taxi to the Dark Side best documentary feature win. I (and, really, just about everybody else) was expecting that other Iraq War nominee and multiple-award-winner, Charles Ferguson’s No End in Sight, to to take home the golden statuette.

The fourth biggest surprise was Tilda Swinton’s win for Michael Clayton. I was expecting Ruby Dee, or perhaps Cate Blanchett or Amy Ryan. But not Swinton, even though she also took the British Academy’s best supporting actress award a week or so ago. She, herself, looked as surprised as I was. 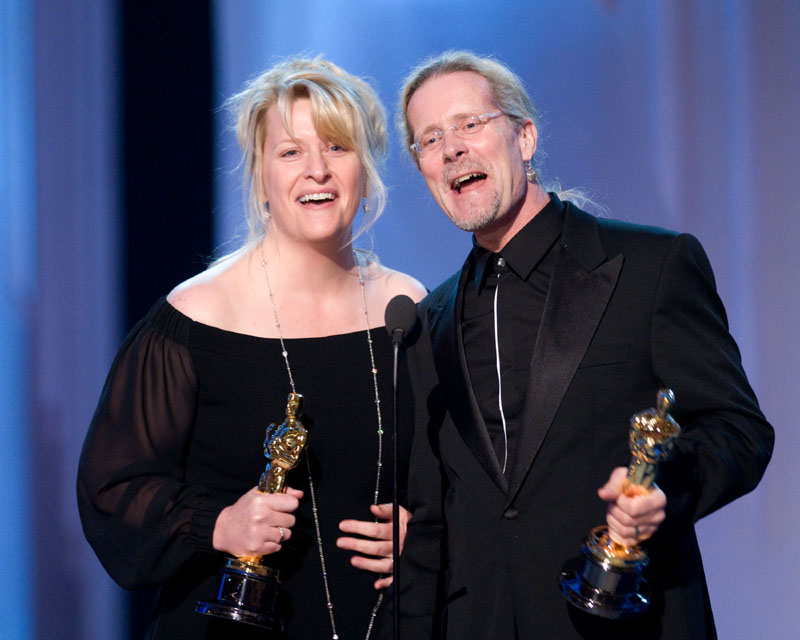 The fifth biggest surprise was that Transformers didn’t win for best sound. The best sound editing award went to Karen Baker Landers and Per Hallberg (above) for The Bourne Ultimatum, while the best sound mixing award went to Scott Millan, David Parker, and Kirk Francis, also for The Bourne Ultimatum. So much for my theory that the loudest movie always wins. (And too bad for Transformers’ Kevin O’Connell, who went home for the 20th time empty-handed.)

Our Oscar predictions have been spot-on! We only missed 12 (out of 24) wins. In other words, we got right a full half (as opposed to an empty half) of the total results. A record. 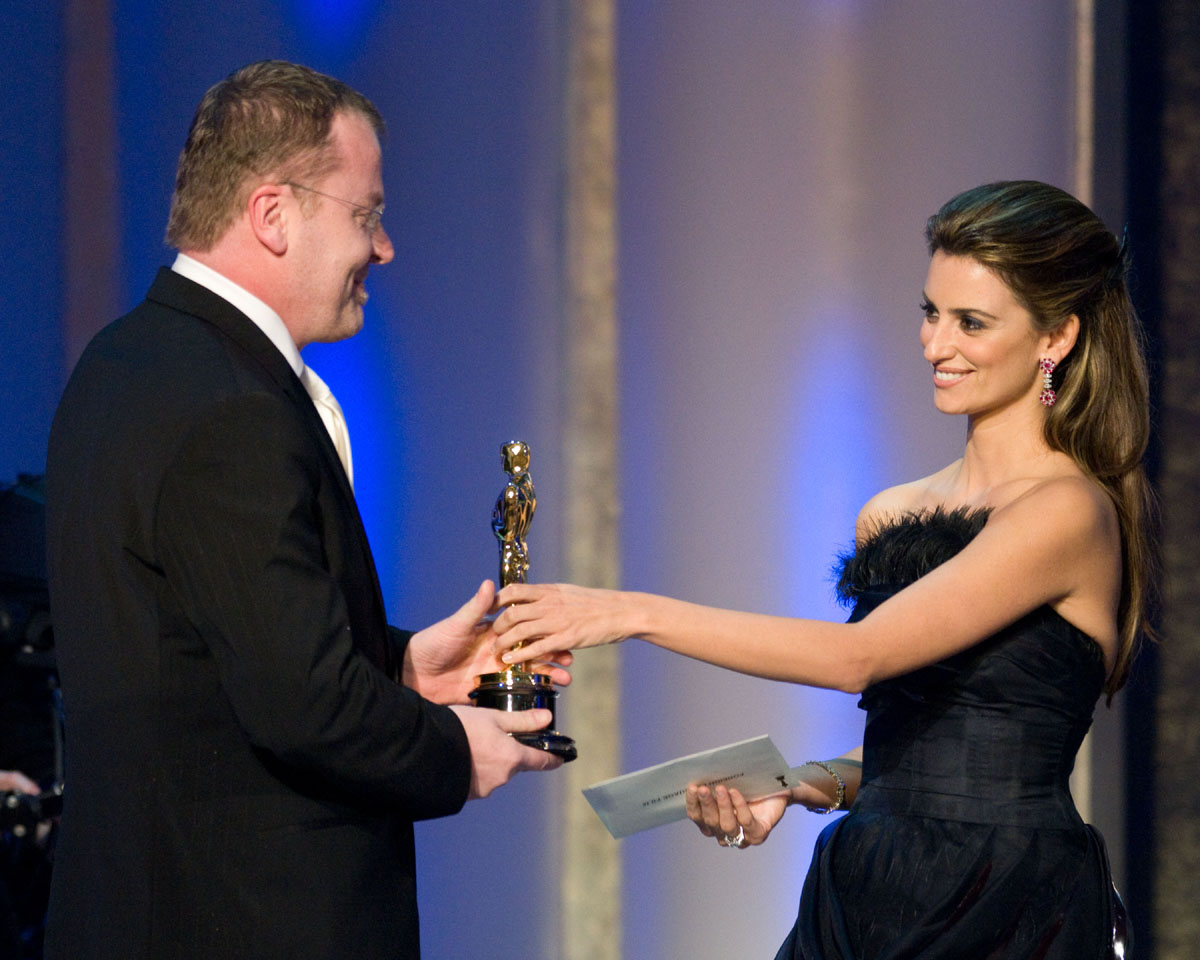 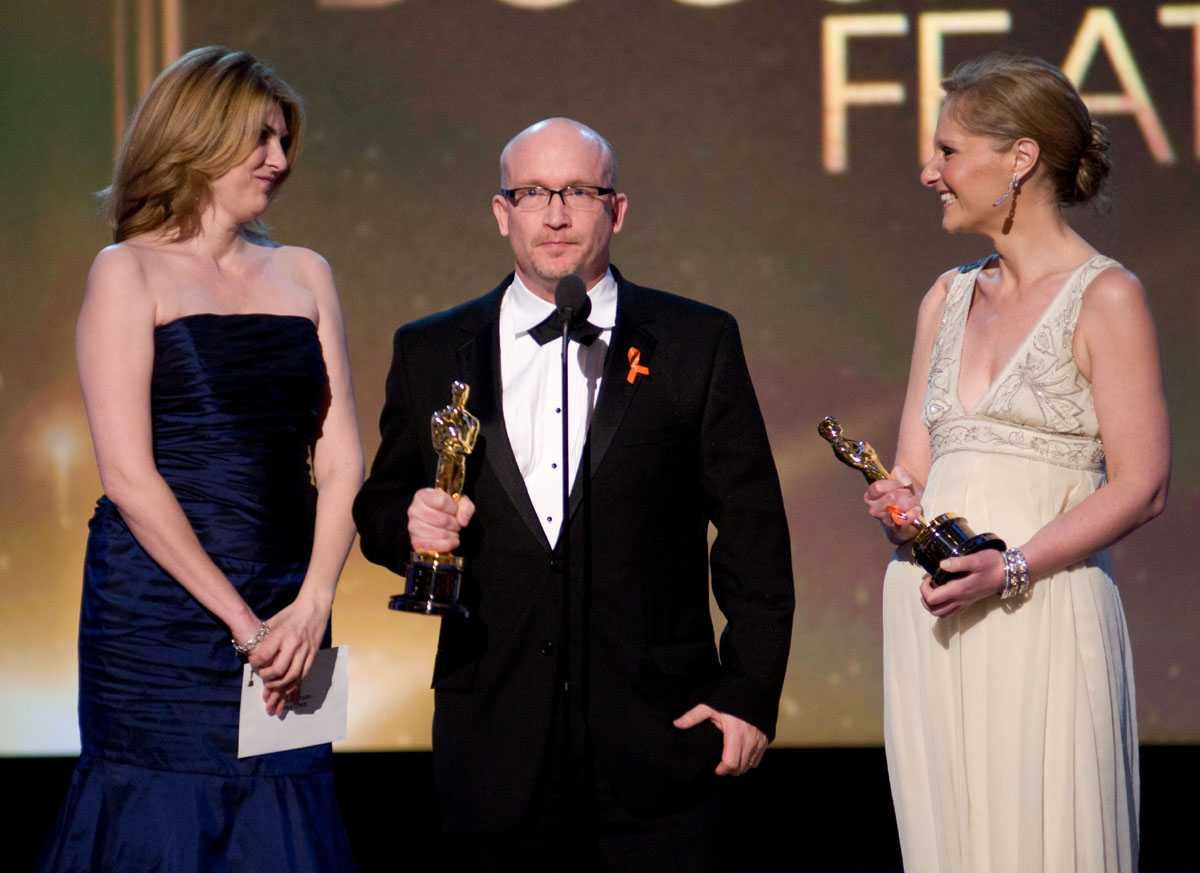 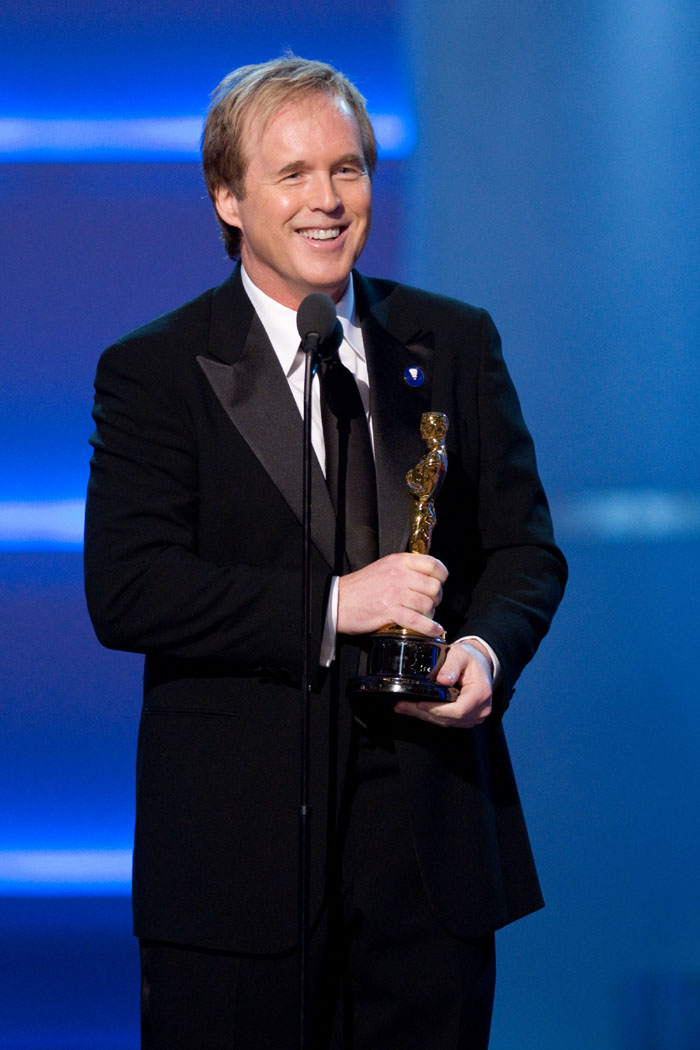 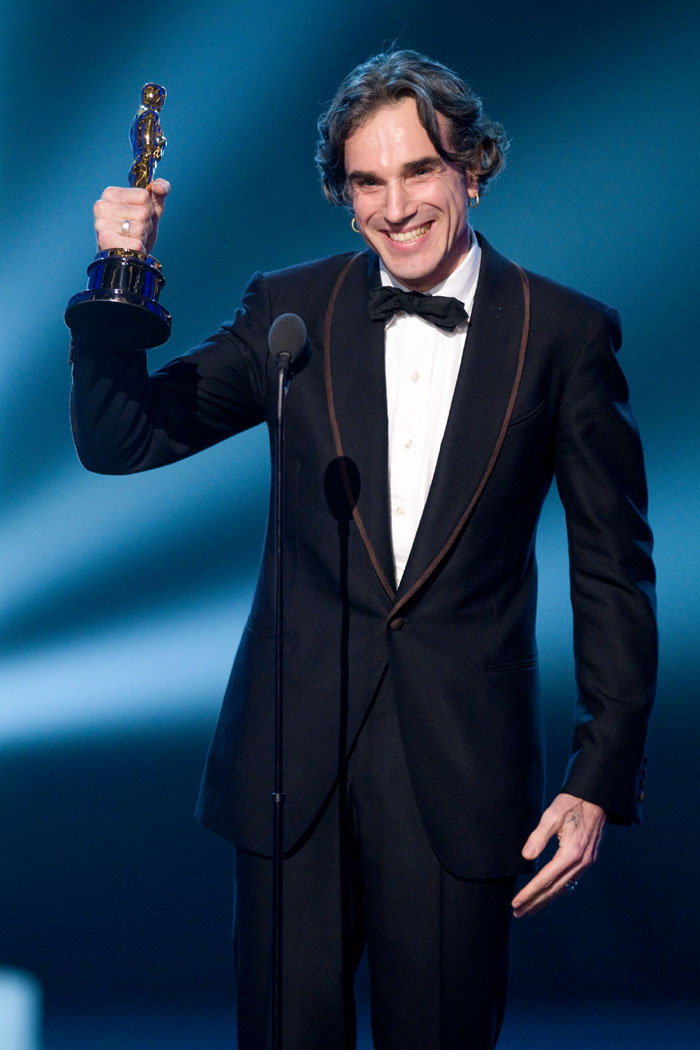 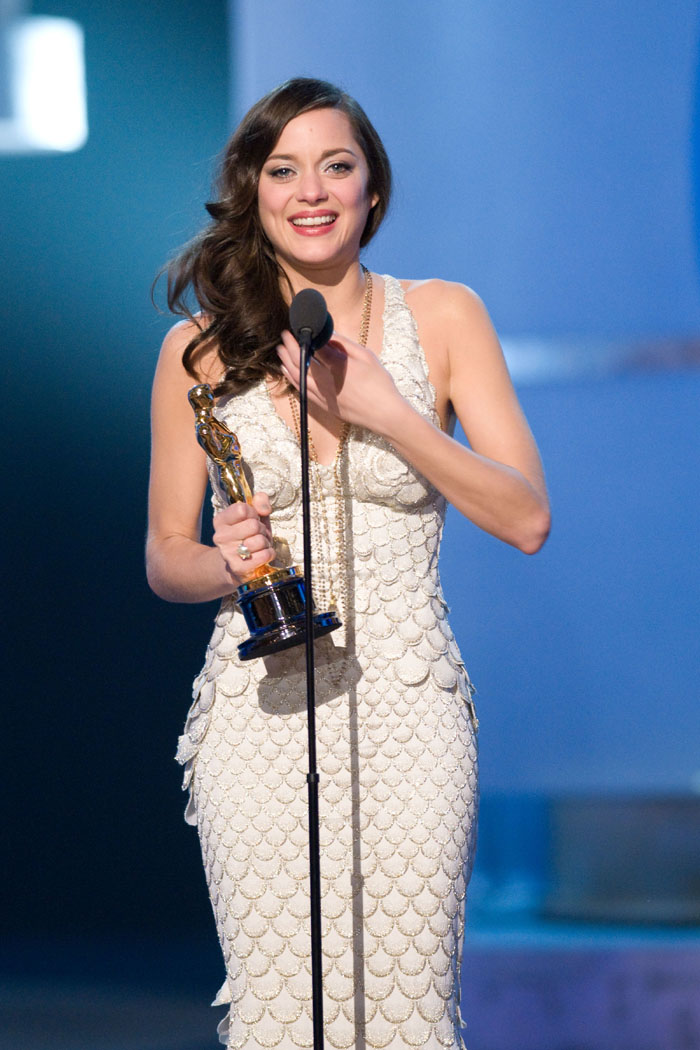 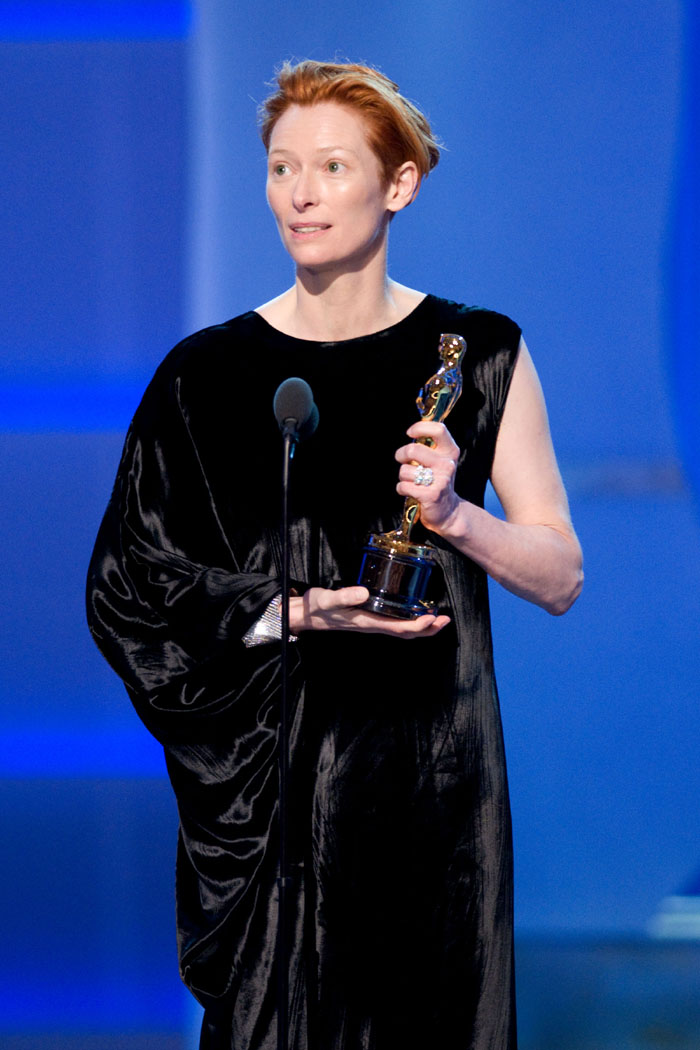 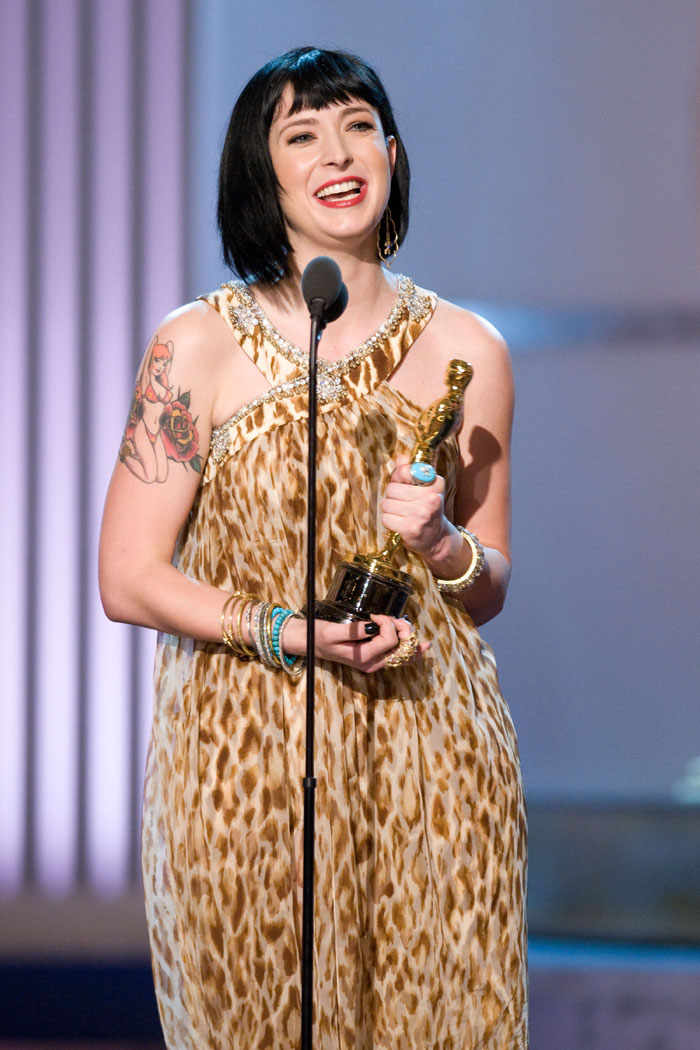 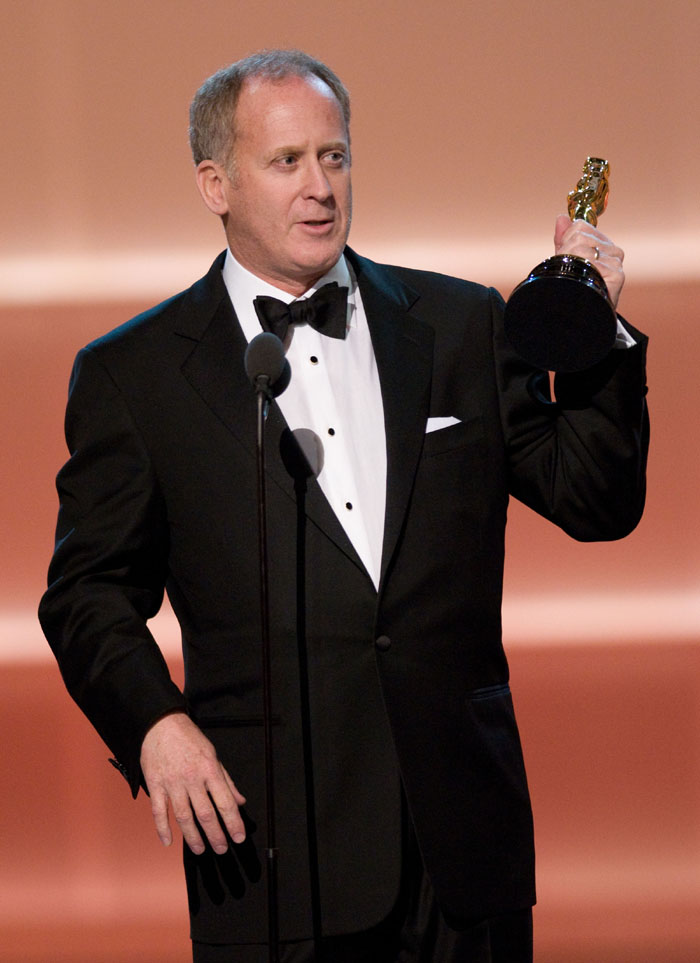 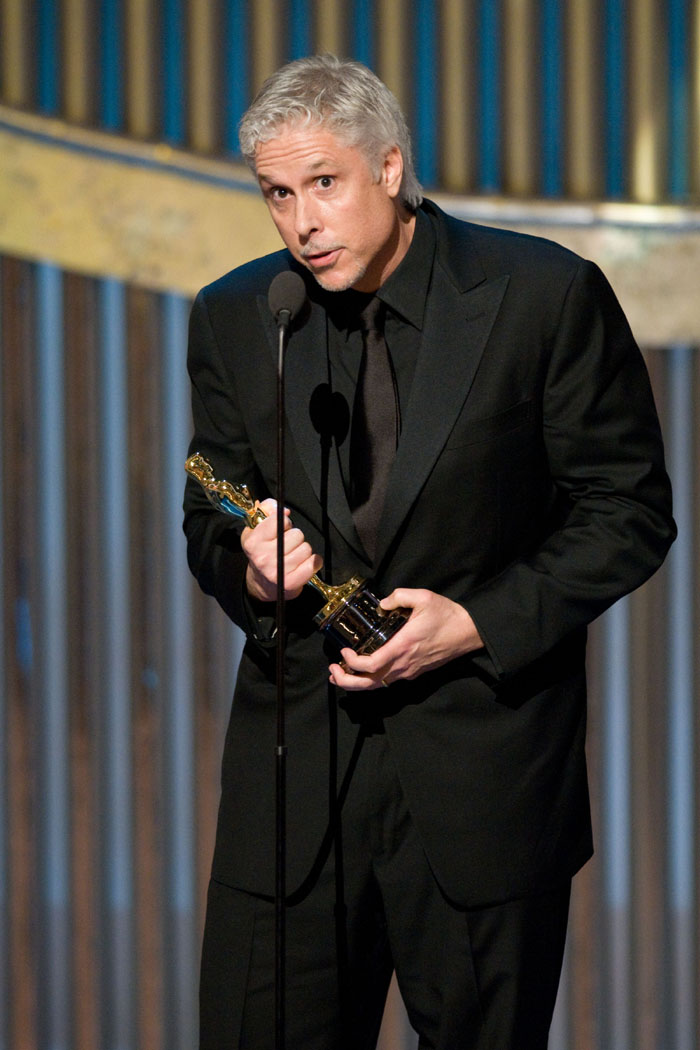 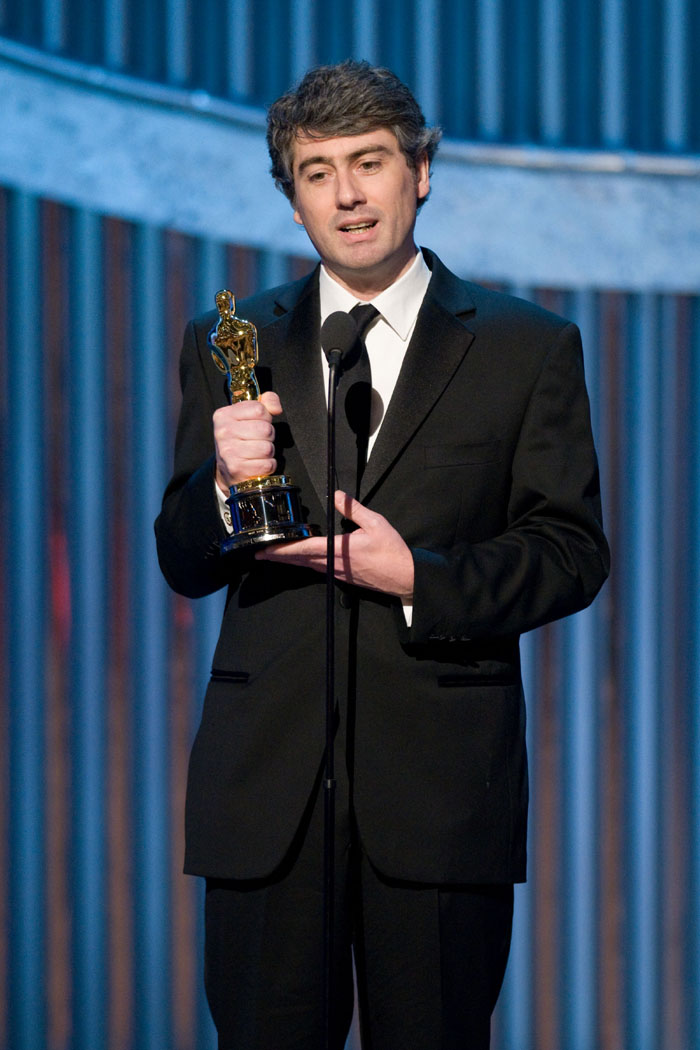 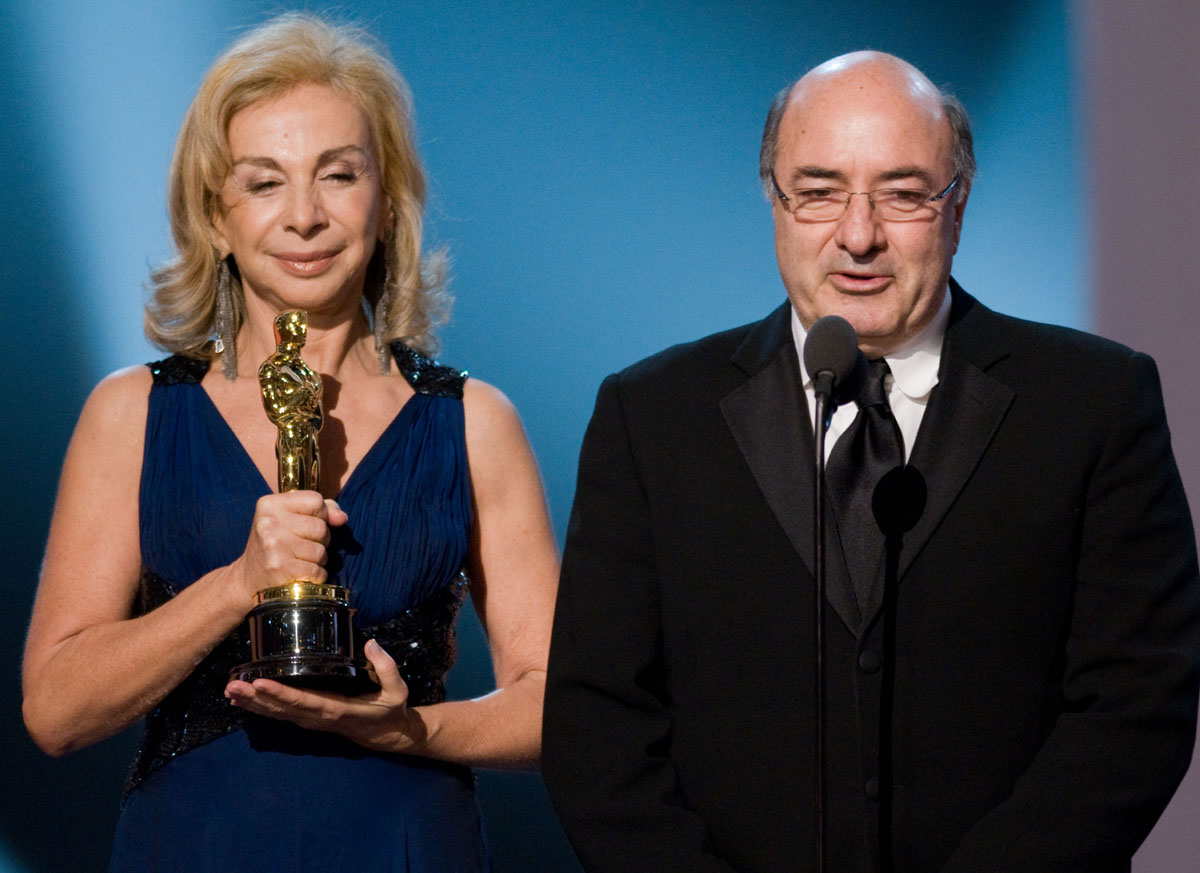 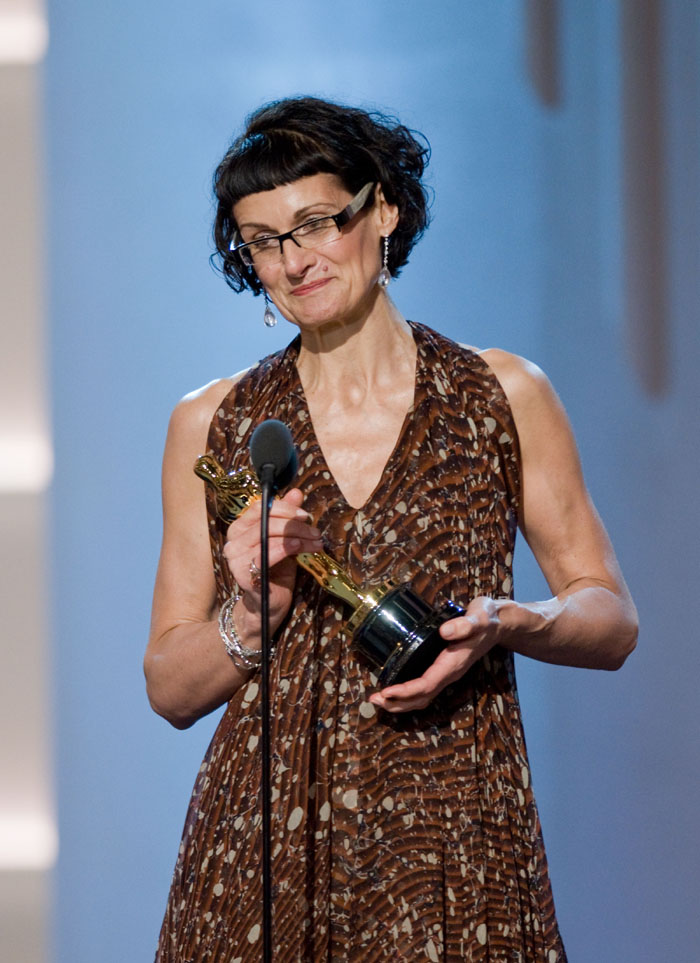 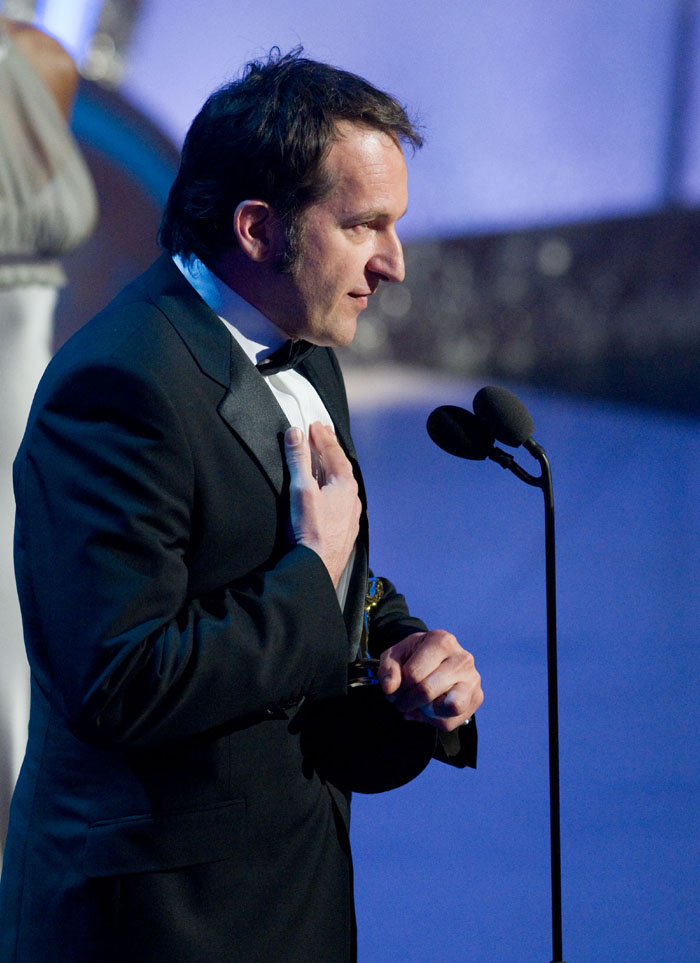 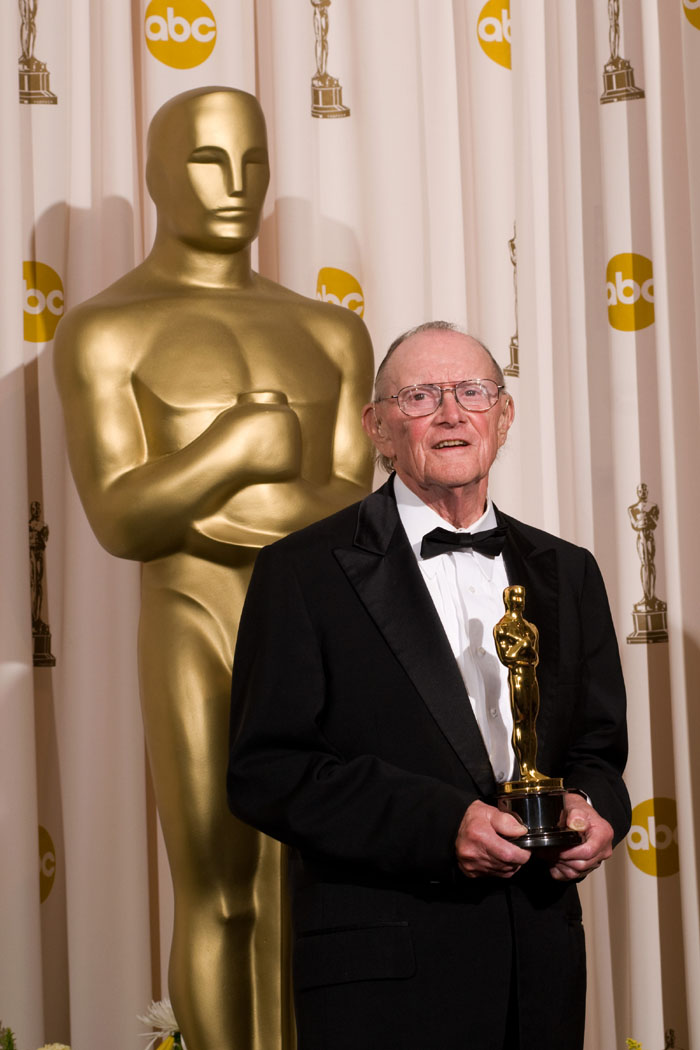 Academy Award of Merit:
Eastman Kodak
For the development of photographic emulsion technologies incorporated into the Kodak Vision2 family of color negative films.

Dirk Bogarde Movies: ‘The Servant’ & ‘So Long at the Fair’

John Stewart was witty and clever and will no doubt be asked back to host in the future. Personally I thought Billy Crystal, Steve Martin, and Chris Rock weren’t really all that great hosting the show. Whoopi was much too tart and honest.

Amy Adams is definately going places, while modern a nice throw back to the girls way back when. Her role in Enchanted really should have merited a nomination but I think it did something more for her than a win would have; I think that movie may have given her that touch of immortality that everyone who was in THE WIZARD OF OZ, has been granted with. It was funny that she as charming in that little black dress as she was in the ridiculous and perhaps as you would say “Gil Adrian wedding cake dress.”

I am glad Marion won, perhaps more actresses like her (foreign and not from english speaking countries) will be recognized. And it was just plain nice to see someone so very happy to win, the evening was much too full of cool and rehearsed speeches.

I think Tilda won because the vote split between Cate and Ruby, (personally I’m just glad someone slapped Denzel Washington onscreen). Amy Ryan and the little girl from Atonment just weren’t well enough known, but they will be moreso because of the nominations.

This year was just plain lacking in variety as far the big nominations but the actresses were more glamorous than they have been in years. But I expected to see more faces from years past given that it was the 80th anniversary. All they could dig up were Faye Dunaway and Jack.

I, like everybody else, was expecting Javier Bardem.
My fault.
I should have put a smiling face or something next to my statement. It was a joke.
Will rectify that problem right now.
Thank you for writing.

You thought that Javier Bardem’s win was a surprise? He has won virtually every honor since the season began for his haunting portrayal of Anton Chighur, and this (along with Daniel Day-Lewis) was one of the awards that I thought everyone had already written off as a shoe-in. Who were you expecting?