Jordan is the only first-timer this year. It submitted Amin Matalqa’s Captain Abu Raed, which stars veteran Nadim Sawalha as an airport janitor mistaken for a pilot by his neighborhood’s poor children. The janitor then sets out to tell fantastic stories about the world out there so as to help the children escape from their drab existence. Earlier this year, Captain Abu Raed nabbed the audience award at the Sundance Film Festival and the best director award at the Seattle Film Festival.

Among other potential Oscar 2009 contenders in the best foreign language film category are:

Before the actual voting takes place – and there’s been one major procedural change this year – watch for half a dozen or more films to be disqualified as a result of some technicality or other.

Nominations for the 81st Academy Awards will be announced on Thursday, Jan. 22, at 5:30 a.m. Pacific Time at the Academy’s Samuel Goldwyn Theater in Beverly Hills.

The 2009 Oscar ceremony will take place on Sunday, Feb. 22, at the Kodak Theatre at Hollywood & Highland Center. In the United States, it will be televised live by the ABC Television Network.

Based on a true story, Worlds Apart  tells the story of the youthful Jehovah’s Witness Sara (Rosalinde Mynster), who falls in love with a non-believer (Pilou Asbaek).

The Oscar 2009 nominations will be announced on Jan. 22. The awards ceremony will be held on Feb. 22.

Considering the sheer number of films – between 200 and 300 – being screened, in addition to their variety and scope, the two-week bfi London Film Festival, now in its 52nd edition, must be one of the best film festivals in the world. Quite possibly the best.

On the festival’s website, there are plenty of festival images, information on the screening films, and several interviews with film personalities, among them Anna Boden & Ryan Fleck, Nandita Das, Albert Serra, and Barry Jenkins.

Below are four films being screened on Sunday, October 26. Those represent only a small sample of what will be available to Londoners every day until October 30. 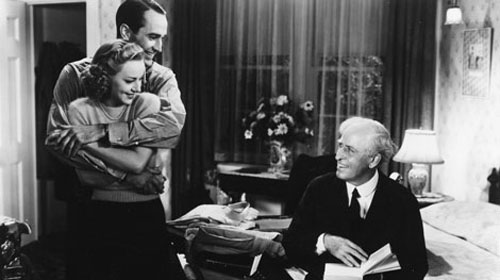 A Man to Remember

A telling demonstration of the true value of film archives is the recent discovery, in the Netherlands Film Museum, of a unique surviving print of the debut feature of Garson Kanin, who later found greater success as a writer (Born Yesterday, Adam’s Rib), but whose directorial skills are manifest in this delightful small gem of a movie made at the Citizen Kane studio, RKO. Perhaps because it was branded a B-movie, Kanin’s film became lost and long-forgotten until a search by Turner Classics unearthed the Dutch print: and Dutch it is and remains in this restored version, which carries indelible Dutch subtitles and written inserts.

Happily, these do not detract a jot from the ageless charm, wit and humanity which underpin the film’s gentle, unambiguously liberal story of a small-town doctor who puts his patients before his pocketbook and earns the respect and affection of all his fellow citizens bar a few grasping businessmen. The film opens with a beautifully cadenced funeral procession, the prelude to a series of nicely judged flashbacks recalling the life and generous deeds of the good doctor. The centrepiece is a wonderfully naturalistic performance by Edward Ellis – not a name to be found easily in any movie reference book, but who deserves more than a footnote in cinema history on the evidence of his screen presence here: a man to remember, indeed. Clyde Jeavons

In an unnamed African country, 15-year-old Johnny Mad Dog (Christopher Minie) heads a platoon of soldiers who are younger than he is. They’re armed to the teeth, sporting a variety of bizarre outfits (odd headgear, angel wings, a wedding dress) and have adopted names you suspect weren’t given to them by their unseen parents, such as No Good Advice, Captain Dust to Dust and Chicken Hair. Charged with taking over a city in an attempt to unseat the government, Johnny leads this band of killers on a murderous rampage toward their destination, leaving mayhem in their wake. Meanwhile, the studious Laokolé (Daisy Victoria Vandy), lives with her young brother and disabled father and dreams of a better life, until Johnny’s hurricane of destruction comes her way. As Johnny advances, Laokolé flees her home.

Filmed in Liberia, with a great young cast, a number of whom lived through the horrors of conflicts similar to those depicted here, Johnny Mad Dog is a visually dazzling modern war film that presents thrilling, occasionally surreal action, while acknowledging the hellish plight of children involved in warfare with poignancy and pertinence. Impressively directed and scripted by Jean-Stéphane Sauvaire, adapted from the novel by Emmanuel Dongala, the film was produced by Mathieu Kassovitz and Benoît Jaubert. Michael Hayden

Further evidence that he is one of the finest film-makers currently at work, [Nuri Bilge] Ceylan’s fifth feature is arguably his most ambitious yet. A politician involved in a car accident asks his driver to take the rap – probably a short jail sentence – in return for a tempting financial reward. It’s just the first of many lies; inevitably, the driver’s wife and son are also affected by the conversation’s outcome, which soon finds all four trapped in a tangled web of fear, desire, doubt and guilt.

Almost Dostoevskian in its astute psychological insights and its dark sense of moral and dramatic irony, Ceylan’s film combines his characteristic dry humour with a brooding intensity that is new to his work’s emotional palette. It’s essentially a development on Climates, extending that film’s bracingly frank look at male-female dynamics in couples to study how they operate within an entire family and its acquaintances, and taking its pioneering exploration of digital camerawork still further: Ceylan’s compositions – often evocative of late Ozu in their deployment of colour – are quite extraordinary in their painterly beauty and eloquence. Geoff Andrew

With films such as Downfall and The Lives of Others, recent German cinema has been celebrated while confronting dark periods in the country’s history. The Baader Meinhof Complex continues that trend, as it deals with the Red Army Faction, the left-wing militant group formed by radicalised children of the Nazi generation, who fought an international terrorist campaign opposing American imperialism and the West German establishment throughout the 1970s.

Moritz Bleibtreu and Martina Gedeck, as Andreas Baader and Ulrike Meinhof respectively, lead an exceptional cast of young German actors, while Bruno Ganz puts in a reliably strong turn as Horst Herold, the head of the German police force charged with bringing the Faction to justice. While the action sequences are undoubtedly thrilling, the film dodges accusations of sensationalism, deftly dealing with the contradictory mentality of a group prepared to murder innocents in the name of democracy and justice. Based on Stefan Aust’s definitive book about the group, adapted by Downfall screenwriter Bernd Eichinger, and directed by veteran helmer Uli Edel (Christiane F., Last Exit to Brooklyn), The Baader Meinhof Complex is a film of considerable class and authority. Michael Hayden

Set in the arid steppes of Kazakhstan, Sergei Dvortsevoys Tulpan chronicles one young mans struggle to prove himself worthy of a wife. In the meantime, he has to cope with his sisters family, a reluctant bride-to-be, sand storms, and illness in the familys sheep herd all that while listening to “By the Rivers of Babylon” on a falling-apart car radio.

Best Artistic Contribution Award: François Dupeyron, With a Little Help from Myself

‘The Class’ is a great french film as well. I loved it!

love of siam was simply amazing. should have been at least been nominated….

How can I get some of these films?

i want to submit my indian movie for the current year.what is the procedure plz furnish the details.thnx

I’ve seen Taare Zameen Par and it’s good. However, I just watched Worlds Apart from Denmark and Waltz with Bashir from Israel. Worlds Apart was interesting and definitely a lovable movie but nothing out of this world. Waltz w/ B was quite awesome - a breakthrough in the genre of documentaries. 80% of the movie makes you think WAR IS COOL but then comes the horrific part. Animation is similar to Persepolis and Keanu Reeves’ A Scanner Darkly.

Tare Zameen Par worth watching to realise what kids go through in developing countries where parents, teachers are not aware and grade all children as inteligent of dumb A+ or F
It is a must see

‘taare zamein par’ a heart wrenching struggle of a young boy with dyslexia…a must watch!

I loved Taare Zameen Par (Stars on the Ground), It was an enchanting film…and although I have not seen the others, I still think it should win!

I definitely think it is heartwarming and worth seeing!

Taare Zameen Par was excellent! I did enjoy it

The indian film was Fantastic, He also was nominated
for the movie lagaan which was also Amazing

india’s taare zameen par is a lot better than the others i have watched……..bettre see that everyone.

Love of Siam. still can’t get it out of my head

I love watching various Foreign Films, and so far have watched the Canadian entry “the Necessities of Life” and Spain’s “Blind Sunflowers” - both movies are interesting … and yes to Francis, watched the Philippine’s entry “Ploning” when I was in L.A.- really moving, had a twist in the end and the cinematography was breathtaking, beautiful scenes - i think, I had a whole new cultural experience for this south east asian ‘Ploning’ movie - a Must See Movie. Hope ‘Ploning’ get’s in the top 5 nominations.