Steve Montgomery 15 years ago
1.3k
Atonement with Vanessa Redgrave. Having made her big-screen debut in the late 1950s (Behind the Mask) and a steady film actress since the mid-1960s (Blow-Up, Camelot), Vanessa Redgrave was bypassed by the 2008 Oscars for her performance in Joe Wright’s period drama Atonement, which earned a total of seven nominations. In years past, Redgrave was the 1977 Best Supporting Actress Oscar winner for Fred Zinnemann’s Julia. Besides, there have been five other nominations: as Best Actress, for Morgan! (1966), Isadora (1968), Mary Queen of Scots (1971), and The Bostonians (1984); and as Best Supporting Actress for Howards End (1992).
Contents hide
1. Dark themes dominate Oscar nominations: Greed & murder + corruption & deception
1.1. Atonement not exactly an Oscar surprise
1.2. David di Donatello winner bypassed
1.3. Laura Linney holds U.S. flag + nominated Oscar winners
1.4. Movie veterans Julie Christie & Ruby Dee
1.5. Double nominee Cate Blanchett
1.6. ‘Enchanted’ vs. ‘Enchanted’ vs. ‘Enchanted’
1.7. No love for Jonny + Deakins vs. Deakins
1.8. Nominated Best Director duos
1.9. Best Director first-timers + ‘Into the Wild’ goes missing
1.10. Oscars’ foreigners
1.11. Missing in action

The 2008 Oscar nominations have been announced. This year’s top contenders are the following:

Of the above, the only two titles not in the running for Best Picture are Ratatouille and The Diving Bell and the Butterfly. The latter is up for Best Director, while Atonement‘s Joe Wright was left out.

Notably, whether in dramas or in comedies, dark themes dominate in just about every category:

A couple of major exceptions: Juno with its feel-good abortion/adoption story and by far the biggest box office hit among the Best Picture nominees, and Ratatouille, toplining a rodent chef-wannabe.

Atonement not exactly an Oscar surprise

Though all but ignored by U.S. critics this awards season, Atonement was a big hit with the Hollywood Foreign Press Association, earning more Golden Globe nominations than any other film. The ensuing publicity may well have made Academy of Motion Picture Arts and Sciences members decide to check out Joe Wright’s British-made period drama.

On the downside, Joe Wright was left unnominated and so were leading lady Keira Knightley, leading man James McAvoy, and veteran Vanessa Redgrave (Best Supporting Actress Oscar winner for Julia, 1977). Curiously, this is the Academy Awards’ second McAvoy snub in a row; last year he went unrewarded for his work in Kevin Macdonald’s The Last King of Scotland, which eventually earned Forest Whitaker the Best Actor Oscar.

Giuseppe Tornatore’s The Unknown Woman / La Sconosciuta was the big winner at the 2007 David di Donatello ceremony. Yet the Italian drama – one of nine Best Foreign Language Film semifinalists – failed to land a nomination in that Oscar category. 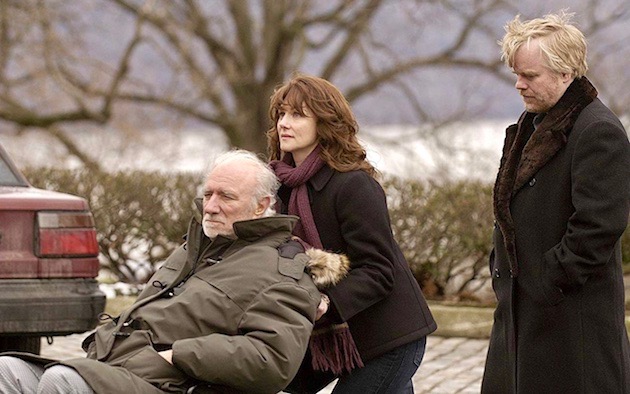 Laura Linney in The Savages, with Philip Seymour Hoffman and Philip Bosco. The only American among this year’s Best Actress Oscar nominees, Laura Linney was shortlisted for Tamara Jenkins’ family comedy-drama The Savages, in which she plays Philip Seymour Hoffman’s estranged sister and the ailing Philip Bosco’s daughter. Hoffman was bypassed for his work in The Savages, but he did land a Best Supporting Actor Oscar nod for Mike Nichols’ political comedy-drama Charlie Wilson’s War, in which he plays CIA operative Gust Avrakotos.

Laura Linney, in the running for her performance in Tamara Jenkins’ The Savages, is the only American among the Best Actress nominees. Marion Cotillard (La Vie en Rose / La Môme) is French, Julie Christie (Away from Her) is English, Cate Blanchett (Elizabeth: The Golden Years) is Australian, and Ellen Page (Juno) is Canadian.

Among the 2008 Academy Awards’ 20 acting nominees, six of them have already won Oscars:

Nine of the acting nominees are Oscar first-timers.

In the 2008 Oscar’s acting categories, Julie Christie is the veteranest of them all: her first nomination – and only win to date – was for John Schlesinger’s aforementioned Darling (1965). If she wins again this year, that’ll mean a(n approximate) 42-year gap between Oscar victories, a record in the acting categories.

Helen Hayes is the current record-holder, with just about 38 years elapsed between her Best Actress win for Edgar Selwyn’s The Sin of Madelon Claudet (for the period 1931–32) and her Best Supporting Actress win for George Seaton’s Aiport (1970).

Now, Best Supporting Actress nominee Ruby Dee (American Gangster) is the overall top veteran in the acting categories, having begun her show business career back in the 1930s. As per the IMDb, Dee’s first film is supposed to have been Leonard Anderson’s 1946 musical That Man of Mine, about which there’s very little information out there.

Nominated as Best Actress for playing British Queen Elizabeth I in Shekhar Kapur’s Elizabeth: The Golden Years and as Best Supporting Actress for playing a version of Bob Dylan in Todd Haynes’ I’m Not There, Cate Blanchett is the eleventh performer to receive two acting nods in the same year. The others were:

Bainter, Wright, Fitzgerald, and Lange won in the supporting category. Pacino, Hunter, and Foxx won as leads. The only double losers listed above are Weaver, Thompson, and Moore. 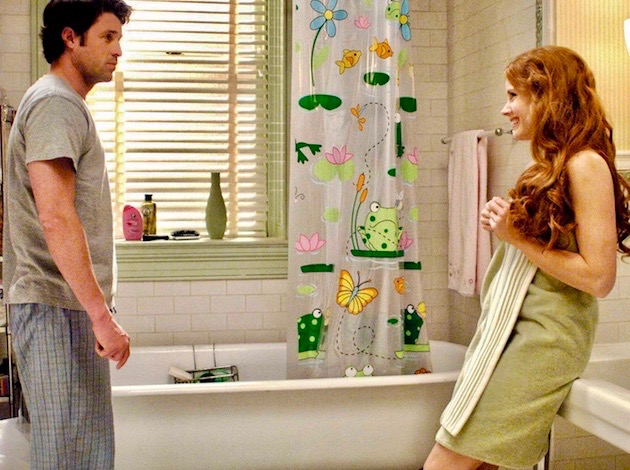 Enchanted with Amy Adams and Patrick Dempsey. A fantasy romantic comedy mixing live action and animated sequences, Kevin Lima’s generally well-regarded Enchanted was a solid box office hit for the Walt Disney Studios. Amy Adams plays a princess who flees her two-dimensional fairy-tale world for New York City’s three-dimensional chaos; Patrick Dempsey is her 3D love interest. While audiences wait for the inevitable happy ending, several Alan Menken and Stephen Schwartz songs are sung – three of which have been shortlisted for the 2008 Oscar. Ironically, Menken’s Enchanted music score was deemed ineligible, as it relied too much on the songs themselves.

That means composer Alan Menken and lyricist Stephen Schwartz are competing with themselves – in addition to Glen Hansard and Markéta Irglová for “Falling Slowly” from Once and the yet-to-be-determined official composers of the song “Raise It Up” from August Rush. (Update: the official “Raise It Up” nominees are Jamal Joseph, Charles Mack, and Tevin Thomas.)

The Enchanted Menken-Schwartz songs are “So Close,” “Happy Working Song,” and “That’s How You Know.”

No love for Jonny + Deakins vs. Deakins

Also in the Oscars’ Music categories, Jonny Greenwood’s much-praised There Will Be Blood score was deemed ineligible reportedly because most of the music wasn’t composed for the film. Somewhat ironically, Alan Menken’s Enchanted score was also deemed ineligible because it was mostly song-based, as opposed to the actual scoring of dramatic/comedy scenes.

This year there’s no Best Adapted Score/Best Song Score category, though apparently there should have been.

By the way, Alan Menken and Stephen Schwartz aren’t the only two 2008 Oscar nominees competing with themselves, as Roger Deakins was shortlisted twice in the Best Cinematography category: for There Will Be Blood and The Assassination of Jesse James by the Coward Robert Ford.

In the Academy Awards’ 80-year history, the Coen brothers are only the third duo to share a Best Director nomination. The previous two were winners Robert Wise and Jerome Robbins for West Side Story (1961) and nominees Warren Beatty and Buck Henry for Heaven Can Wait (1978). Remember: last year, Little Miss Sunshine was a Best Picture nominee, but directors Jonathan Dayton and Valerie Faris were bypassed.

Regarding Warren Beatty, the Hollywood veteran has also received four nominations in a single year – twice, in fact. Both times, whether solo or in collaboration, as producer, director, star, and screenwriter for Heaven Can Wait (1978) and Reds (1981). He took home the Best Director Oscar for Reds.

Of note, the Coen brothers also collaborated on the 1996 Best Picture Oscar nominee Fargo, but only Joel Coen was officially listed as that film’s director. Ethan Coen was listed as the producer, while both Coens were credited for the screenplay and as editors (like in No Country for Old Men, billed as “Roderick Jaynes”). Fargo was shortlisted for a total of seven Oscars, including the four categories mentioned in this paragraph.

More on the 2008 Oscar’s Best Director category: five of the six nominated directors are first-timers. Fargo‘s Joel Coen is the single exception.

Missing in action was Sean Penn for Into the Wild, a Directors Guild Award nominee. In his stead, the Academy’s Directors Branch voters opted for Jason Reitman for Juno.

Into the Wild was also shortlisted in the Writers Guild Awards’ Best Adapted Screenplay category. In its place (and that of Zodiac), the Academy’s Writers Branch opted for Away from Her and Atonement. 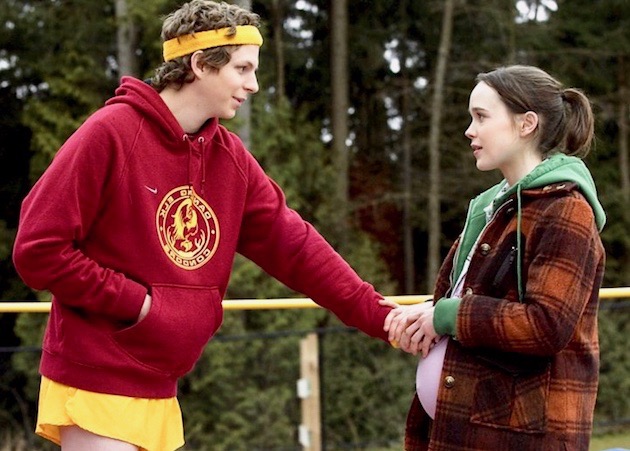 Juno with Ellen Page and Michael Cera. Born in Halifax, Nova Scotia, Juno actress Ellen Page is one of a number of non-U.S.-born talent in the running for the 2008 Academy Awards. Another one is Juno director Jason Reitman, born in Montreal, Quebec. Whether from Canada or elsewhere, that group also includes Julie Christie, Marion Cotillard, Marjane Satrapi, and Alberto Iglesias. Born in Brampton, Ontario, Michael Cera is a third Canadian-born Juno talent, but unlike Page and Reitman, Cera has yet to receive his first Oscar nomination.

As so often happens, non-Americans had a strong showing at this year’s Oscars. Here’s a sample list:

Besides those mentioned elsewhere in this post, notably missing from the 2008 Oscars are:

The WGA willing, the Oscar ceremony, in all its grandiose tackiness, will be held on Feb. 24 in Hollywood.

Dirk Bogarde Movies: ‘The Servant’ & ‘So Long at the Fair’