Final ballots for the 80th Academy Awards, with the names of the nominees in 19 Oscar categories, were mailed today, Jan. 30, to the 5,829 voting members of the Academy of Motion Picture Arts and Sciences.

In timely fashion, below are our 2008 Oscar predictions, followed by a brief explanation/justification for each of our choices. Check it all out and make future bets at your own risk.

Easily the favorite choice among U.S. film critics, Joel and Ethan Coen’s dark, violent thriller No Country for Old Men was the front-runner along with Paul Thomas Anderson’s tale of greed and power lust, There Will Be Blood.

At the other of the dramatic spectrum, Jason Reitman’s teen pregnancy/adoption comedy Juno was the fluffy dark horse that could potentially tip the scale against the heavy-drama heavyweights.

As usual, this is the toughest feature film category to predict. None of the five nominees – Beaufort, 12, The Counterfeiters, Mongol, and Katyn – has been widely reviewed in the United States.

Our pick: Katyn, the story of how in 1940 the Russian Red Army massacred Polish troops – and then proceeded to blame the Nazis for their bloody deed.

Directed by veteran Andrzej Wajda (A Generation, Ashes and Diamonds, Man of Marble), who’ll be turning 82 next March, Katyn is the likely winner because:

* Here are the Best Foreign Language Film Oscar nominees of the past 10 years (1998–2007) with a World War II background: this year’s Katyn and The Counterfeiters, in addition to Days of Glory, Sophie Scholl: The Final Days, †Downfall, Zelary, Twin Sisters, †Nowhere in Africa, Divided We Fall, †Life Is Beautiful.

Best Actress: Julie Christie, ‘Away from Her’

Up to the announcement of the Screen Actors Guild Awards, we had a three-lane Best Actress Oscar race: British veteran Julie Christie for Away from Her, Frenchwoman Marion Cotillard for La Vie en Rose / La Môme, and Canadian Ellen Page for Juno – by far the biggest box office hit among the films nominated in this category.

As a result of her SAG Award win, Julie Christie is now the front-runner for her portrayal of a woman suffering from Alzheimer’s disease in the Sarah Polley-directed Canadian drama.

If Christie takes home this year’s Best Actress Oscar statuette, she’ll break the “gap between wins” record in the acting categories: 42 years (give or take a few days/weeks) between John Schlesinger’s Darling (1965) and Away from Her.

The current record-holder is Helen Hayes: 38 years between her Best Actress win for Edgar Selwyn’s The Sin of Madelon Claudet (for the period 1931–1932) and her Best Supporting Actress win for George Seaton’s blockbuster Aiport (1970).

Best Actor: Daniel Day-Lewis, ‘There Will Be Blood’

Michael Clayton star George Clooney should have been the sentimental Best Actor Oscar favorite, as he’s a local Hollywoodite who has been around for a quarter of a century. Clooney, however, won an Oscar a mere two years ago – as Best Supporting Actor for Stephen Gaghan’s Syriana.

Enter Ireland-based Englishman Daniel Day-Lewis, who plays a ruthlessly all-American oil baron in There Will Be Blood. This awards season runaway favorite among U.S. film critics, Day-Lewis has solidified his position as this year’s front-runner after winning the Best Actor SAG Award.

In case he does take home this year’s Best Actor Oscar, that’ll mark an 18-year gap between wins. Day-Lewis had previously topped that category at the 1990 ceremony, for his work in Jim Sheridan’s Irish drama My Left Foot.

Either way, Jack Nicholson will remain the Best Actor “gap between wins” record-holder: 22 years separate Milos Forman’s One Flew Over the Cuckoo’s Nest (1975) from James L. Brooks’ As Good as It Gets (1997). 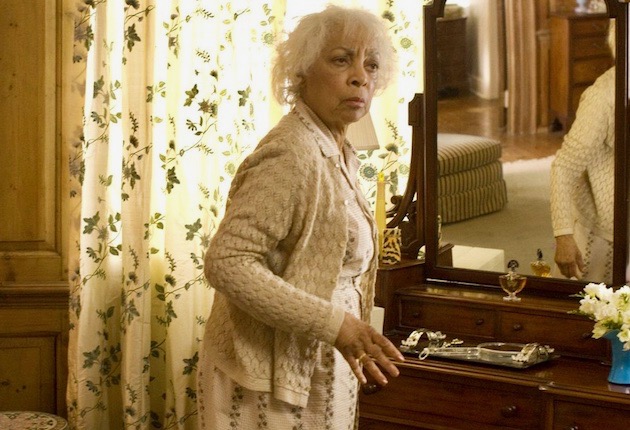 Ruby Dee in American Gangster. In show business since the 1930s and in movies – off and on – since the mid-1940s, 85-year-old Ruby Dee is the most veteran talent among the 2008 Academy Award nominees in the acting categories. Notably, first-time nominee Dee is the only American Gangster performer to have been shortlisted for this year’s Oscars.

It’s true that not every SAG winner goes on to win the Oscar, but considering that…

Having said all that, we must admit that this particular category remains somewhat fuzzy.

For his turn as a mysterious, demonic killer in Joel and Ethan Coen’s No Country for Old Men, Spaniard Javier Bardem – the third non-American actor on this Oscar Predictions list – has been the shoo-in 2008 Best Supporting Actor Oscar pick from the get-go.

A 2000 Best Actor nominee for Julian Schnabel’s Before Night Falls, Bardem has won nearly every U.S. film critics group Best Supporting Actor award this season, in addition to a Golden Globe and a SAG Award.

As the first decade of the 21st century nears its end, the Coen brothers can already be labeled cinema veterans.

Whether or not officially credited* as co-directors, co-producers, co-screenwriters, and/or co-editors, the two tied-at-the-hip filmmakers have been around for more than two decades – since the 1984 crime thriller Blood Simple. Yet, despite their generally well-regarded work, they have never won a Best Director Oscar.

Joel Coen was nominated for Fargo (1996), but lost to Anthony Minghella for The English Patient. (Co-director Ethan Coen was credited as the film’s producer, thus earning a nomination in the Best Picture category.)

So, it’s the Coens’ Oscar turn now. Besides, they’ve already won this year’s DGA Award – the first feature film directorial pair to do so since Robert Wise and Jerome Robbins topped that DGA category for the 1961 musical West Side Story.

* Until The Ladykillers (2004), in which they were billed as directors, producers (along with a few other names), screenwriters, and editors (as “Roderick Jaynes”), the Coen brothers shared credit for their films by naming Joel the director and Ethan the producer.

If it were the Golden Globes or a major film festival, we might have predicted Paul Thomas Anderson for There Will Be Blood. But unlike the Hollywood Foreign Press Association and world film festival juries, Academy members tend to vote for the same film in many categories.

Even more importantly, the Academy’s best film of the year is almost invariably the winner of the Best Director and Best Screenplay (whether original or adapted) awards.

Directed by Jason Reitman, the Diablo Cody-scripted comedy Juno follows a pregnant 15-year-old as she looks for the ideal parents for her upcoming child.

The winner of a number of U.S. film critics Best Screenplay awards, Juno also happens to be a “small” comedy – in an ocean of heavy drama – that has gone on to become a crowd-pleasing box office hit in the same manner as last year’s Little Miss Sunshine, which, as it happens, was the winner of the Best Original Screenplay Oscar.

Charles Ferguson’s Iraq War documentary No End in Sight, about the George W. Bush administration’s mix of arrogance and ineptitude before, during, and after the invasion of Iraq, has received numerous accolades from U.S. film critics groups.

In view of the bloody, costly disaster that war has become and the fact that the effects of the U.S.-led invasion and occupation of that country will reverberate for years – or, more likely, for decades – to come, No End in Sight deals with an urgently topical subject matter.

Michael Moore’s Sicko also deals with an urgently topical subject matter – the bloody, costly disaster that is the U.S. healthcare system. But five years after Moore’s win for Bowling for Columbine, Academy members will probably refrain from handing him out another Oscar for fear the controversial filmmaker, camera in hand, will confront those who booed him when he spoke out against the Iraq invasion at the 2003 ceremony.

Brad Bird’s Ratatouille is the most widely praised animated feature of 2007. It was also a major box office hit.

When it comes to the Academy Awards’ Best Animated Feature category, instituted a mere six years ago, you (usually) can’t beat the combination of prestige and dollar signs.

Past winners include Shrek, Finding Nemo, The Incredibles, and Happy Feet.

And then there’s the Pixar label, which surely doesn’t hurt. See winners Finding Nemo and The Incredibles, the latter also directed by Brad Bird.

Best Cinematography: ‘There Will Be Blood,’ Robert Elswit

Robert Elswit won the 2008 American Society of Cinematographers Award, beating Roger Deakins for two films, The Assassination of Jesse James by the Coward Robert Ford and No Country for Old Men.

Although double Academy Award nominee Deakins does have a chance of winning this year’s Oscar for either film, this is one instance when the much overused – and almost invariably nonsensical – Oscar truism “votes are split; a third party wins” could actually be based on reality. That is, in case Academy members make their selection solely because of Roger Deakins.

Anyhow, split votes or no, we believe that Robert Elswit will take home the Best Cinematography Academy Award for There Will Be Blood.

An atmospheric suspense thriller that wins the Best Picture Academy Award will most likely also win for Best Film Editing.

If, however, Academy members feel that the Coens will be over-honored during the Oscarcast – what with awards for Best Film, Best Director, and Best Adapted Screenplay – they may decide to give the film editing trophy to Christopher Rouse for The Bourne Ultimatum.

But we’re betting on No Country for Old Men.

Dario Marianelli’s Atonement score has been one of the most widely praised elements in Joe Wright’s period drama.

Moreover, it has already won a Golden Globe. 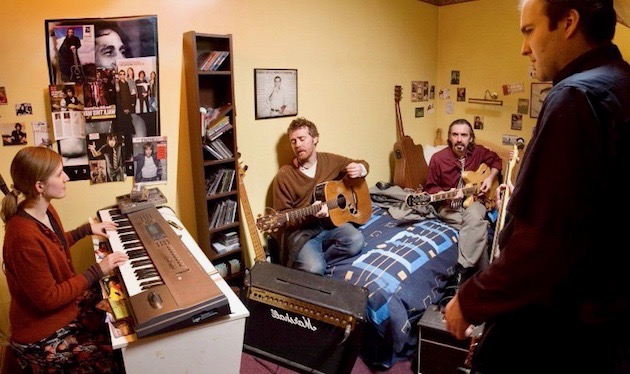 Until a few hours ago, there was some question as to whether the song “Falling Slowly” would be un-nominated because it might have been originally written for something other than Once.

After hectic phone calls were made, emails were sent out, and affidavits were received, the Academy reached the conclusion that the song was indeed eligible. And it’ll most likely beat its three Enchanted competitors (plus the August Rush ditty).

All of this year’s Best Art Direction nominees are period pieces, but Atonement is the only one with the “classical” (European) look that Academy members most appreciate.

By the way, the most recent film with a contemporary setting to win the Best Art Direction Oscar was Bob Fosse’s glitzy 1979 musical All That Jazz (winners: art directors Philip Rosenberg and Tony Walton, set decorators Edward Stewart and Gary J. Brink).

In the Best Costume Design category, all of this year’s nominees are also period pieces. Once again, Atonement is the one with the most “classical” look.

The most recent film with a contemporary setting to win the Best Costume Design Academy Award was Stephan Elliott’s outlandishly garbed 1994 Australian drag-queen comedy-drama The Adventures of Priscilla, Queen of the Desert (winners: Lizzy Gardiner and Tim Chappel).

In the categories below, our Oscar predictions are based on CGI robotics, decibel levels, and latex amounts.

James Longley’s documentary feature Iraq in Fragments was nominated last year. Sari’s Mother, about an Iraqi mother trying to find medical assistance for her AIDS-stricken 10-year-old son, may be Longley’s turn to win.

The tale of a little boy who reveals himself a master at stealing, The Mozart of Pickpockets has also been nominated for the 2008 César.

In terms of Sound Editing I don’t know why there is even any other nominees aside from Transformers. I know many are saying that There will be Blood should take the award however I disagree as there was barely any sound to edit in that film!!! Transformers on the other hand takes the cake as not only a great film but a great example of how a movie can be transformed( haha) with a exceptional sound editor.