Many have complained that the 2011 Oscar ceremony was dull. That hosts Anne Hathaway and James Franco were out of their element. That the ceremony was predictable. That the jokes were lame.

Now imagine if you had a German cross-eyed opossum hosting the proceedings – or at least acting as one of the night’s presenters. Personally, I believe the 2011 Oscar ceremony would have skyrocketed in the ratings, beating both the Nielsen-friendly, booze-soaked Super Bowl parties and the 1998 Oscar ceremony when James Cameron’s Titanic swept the board.

In the picture above, the Leipzig Zoo‘s Heidi, the Cross-Eyed Opossum, impersonates glamorous Hollywood star Sandra Bullock by handing the Oscar to a photo of (a cross-eyed-looking) Colin Firth. Had Firth received his golden statuette from Heidi’s hands, he wouldn’t have just felt his upper abdominals “threatening to form themselves into dance moves.” He’d have gotten down and dirty, jitterbugging on stage.

Heidi may also be a soothsayer, having “predicted” that Natalie Portman was going to be the year’s Best Actress winner. Apparently, some of her other predictions weren’t exactly accurate, though I’m sure she beat ours at Alt Film Guide.

Note: According to a Huffington Post report, the Academy did invite Heidi to the Oscar ceremony. Also worth noting, is that Heidi’s crossed eyes may have been a result of a poor diet when she was young. She is now on a diet; possibly, her eyes will return to normal.

This year, the Academy Awards seem quite predictable, though paradoxically they also seem ripe for a few surprises. For instance, as mentioned in our previous post, David Fincher’s The Social Network dominated the film critics’ awards this awards season, but Tom Hooper’s The King’s Speech has emerged as the Best Picture favorite following wins at the Producers Guild, the Directors Guild, and the Screen Actors Guild awards.

Will relative newcomer Hooper also win Best Director, or will that Oscar statuette go to relative veteran David Fincher (whose credits range from Alien³ to Zodiac)? If Fincher wins, will The Social Network also win, or will we have a split Best Picture/Best Director vote?

Upsets in the acting categories?

Also, Christian Bale and Melissa Leo have been the critics’, the Golden Globes’, and SAG’s top choices for their supporting performances in David O. Russell’s The Fighter. But could a The King’s Speech sweep result in Oscars for Geoffrey Rush and Helena Bonham Carter?

Additionally, Natalie Portman and Colin Firth seem unbeatable for their performances in, respectively, Darren Aronofsky’s Black Swan and The King’s Speech. Well, there should be no surprises there, barring an upset of either Lauren Bacallian or Brokeback Mountainian proportions.

See follow-up posts for our predictions in the acting categories. For now, I’ll be dealing with the likely Best Director winner.

I’m betting on David Fincher. Admittedly, there’s a very good chance that unexpected DGA Award winner Tom Hooper will come out victorious at the Oscars as well. But the British Hooper is a newcomer as far as Hollywood is concerned, and most Oscar voters are based/work in the American film industry.

Fincher, on the other hand, was a Best Director Academy Award nominee in 2008 for The Curious Case of Benjamin Button, and his portfolio includes well-regarded efforts such as Se7en and Zodiac. He has been making (sporadic) feature films for nearly two decades and has never won an Oscar.

Something else in common: Harvey Weinstein, whose The Weinstein Company distributed The King’s Speech in the U.S., was then head of Miramax, responsible for the domestic distribution of Shakespeare in Love.

But here’s a key difference: Steven Spielberg won the Directors Guild Award for Saving Private Ryan; David Fincher didn’t get it for The Social Network. Since 1950, only six times has the DGA Award winner lost the Best Director Oscar.

On Sunday night, Feb. 27, we’ll see whether or not our Oscar predictions are accurate. 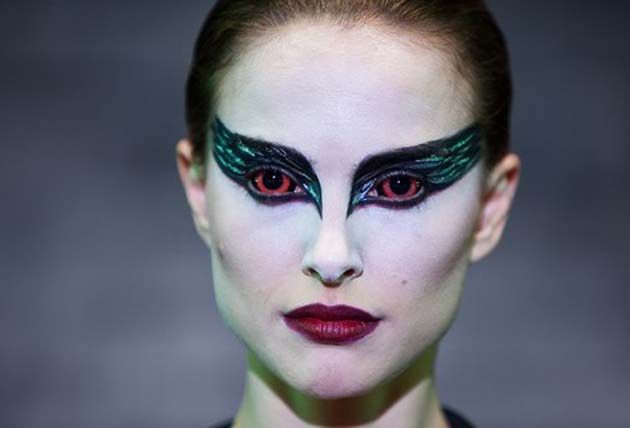 It doesn’t hurt that Portman is young, pretty, and at age 29 already a movie veteran, having appeared in more than thirty features in the last 17 years. In fact, Portman was an Oscar nominee in early 2005, for her supporting performance in Mike Nichols’ Closer.

Veteran Annette Bening, in the running for Lisa Cholodenko’s lesbian comedy-drama The Kids Are All Right, will have to wait for another opportunity. The same goes for Michelle Williams (Blue Valentine and Jennifer Lawrence (Winter’s Bone). Nicole Kidman (Rabbit Hole), for her part, will have to wait some more for her second Oscar. (The first one was for The Hours, 2002.)

Much like Natalie Portman, Colin Firth has been the critics’ darling this year. Firth has also won both the Best Actor SAG Award and the Golden Globe for Best Actor – Drama.

Something else to make Academy members pay heed: At the domestic box office alone, The King’s Speech has earned more than $108 million to date. And Firth himself has been around for more than a quarter of a century, since Marek Kanievska’s Another Country back in 1984.

Last year, Firth received his first Academy Award nomination, for Tom Ford’s A Single Man. This year, the actor who would have been Firth’s only potential (sentimental) threat – Jeff Bridges for Joel and Ethan Coen’s True Grit – is actually no threat at all as Bridges won last year’s Best Actor Oscar for Scott Cooper’s Crazy Heart.

For the record, the other 2010 Best Actor Oscar nominees are James Franco for 127 Hours, Jesse Eisenberg for The Social Network, and Javier Bardem for Biutiful. 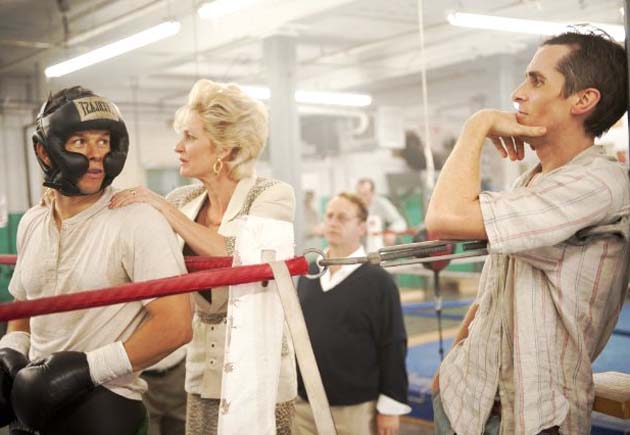 Melissa Leo and Christian Bale in ‘The Fighter,’ with Mark Wahlberg.

Barring a take-no-prisoners The King’s Speech sweep – carrying with it Helena Bonham Carter – Melissa Leo should be this year’s Best Supporting Actress Academy Award winner for her supporting performance in David O. Russell’s boxing drama The Fighter. Leo has already won most of the North American critics’ 2011 awards, in addition to the Golden Globe and SAG Award.

Besides, she has been around for a couple of decades and, just as importantly – remember Sandra Bullock a year ago? – she has come up with some well-received “thank you” speeches. She has talked about being 50 and enjoying the best years of her career, and has discussed the importance of unions, a topical issue considering the ugly stuff taking place in Wisconsin as I type this. The likability factor is tremendously important for those awards.

Melissa Leo’s Oscar ads raised some eyebrows a few weeks ago, but they were really not that different from what Helen Mirren did back when she was in the running for The Queen in early 2007.

On the front cover of magazines, Mirren made sure everyone knew that at age 61 she was no frump like the woman she portrayed in Stephen Frears’ acclaimed movie, proudly displaying the most dangerous pair of knockers since The Outlaw‘s Jane Russell back in 1943. Mirren, as everyone knows, was that year’s Best Actress winner.

Saved from ‘Terminator: Salvation’ fall out

Following a well-publicized, expletive-filled rant on the set of Terminator: Salvation, not that long ago Christian Bale wasn’t exactly most people’s idea of a likable performer. But Bale is the star of Christopher Nolan’s Batman Begins and The Dark Knight; he has been making movies since Steven Spielberg’s Empire of the Sun (1987); and he lost thousands of pounds to play the role of a former boxer-turned-junkie in The Fighter. Some will see that as a selfless dedication to his craft, to be honored much like Robert De Niro’s pizza- and spaghetti-binging for the last third or so of Martin Scorsese’s Raging Bull.

Not to be forgotten is that Bale has been the North American film critics’ favorite. He has also won both the Best Supporting Actor Golden Globe and the SAG Award.

Christian Bale’s chief competitor – running way behind – is The King’s Speech‘s Geoffrey Rush, a respected stage and screen performer who received excellent notices in a movie much more widely admired (and more successful) than The Fighter. Additionally, Best Cast co-winner Rush came up with a memorable speech at the SAG Awards, paying homage to his fellow The King’s Speech players while singling out veteran Claire Bloom (Charles Chaplin’s leading lady in Limelight).

Perhaps they shouldn’t, but these things do count. Remember Sandra Bullock. 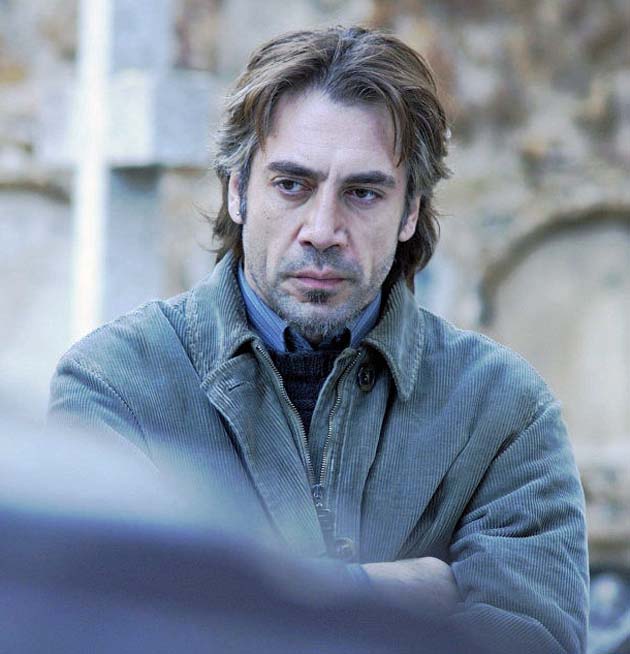 Best Foreign Language Film is a tough category, as only a relatively small group of Academy of Motion Picture Arts and Sciences voters – usually older ones, with lots of free time – selects the nominees and the winners. The latter tend to be sentimental and/or inspirational dramas.

Representing Mexico, the Mexican-Spanish co-production Biutiful revolves around an ex-con who doesn’t have long to live, but who finds redemption as he gets ready to depart for the Great Beyond. A movie can’t get more Oscar-friendly than that. As a plus, Biutiful was directed by internationally acclaimed filmmaker Alejandro González Iñárritu (21 Grams, Babel) and it features an international star: Best Actor Oscar nominee Javier Bardem.

Biutiful‘s chief competitor is probably Denis Villeneuve’s Incendies (Canada), about two young siblings who travel to the Middle East in an attempt to uncover their mother’s mysterious past.

Any other winners but David Seidler for The King’s Speech and Aaron Sorkin for The Social Network would be a major – let’s italicize that: major – upset. After all, both movies are the chief contenders for the Best Picture and Best Director Oscars. Both have been North American critics’ favorites this awards season. Both have done well at the domestic box office. And last but not least, Aaron Sorkin was a Writers Guild Award winner. (The King’s Speech was ineligible.) 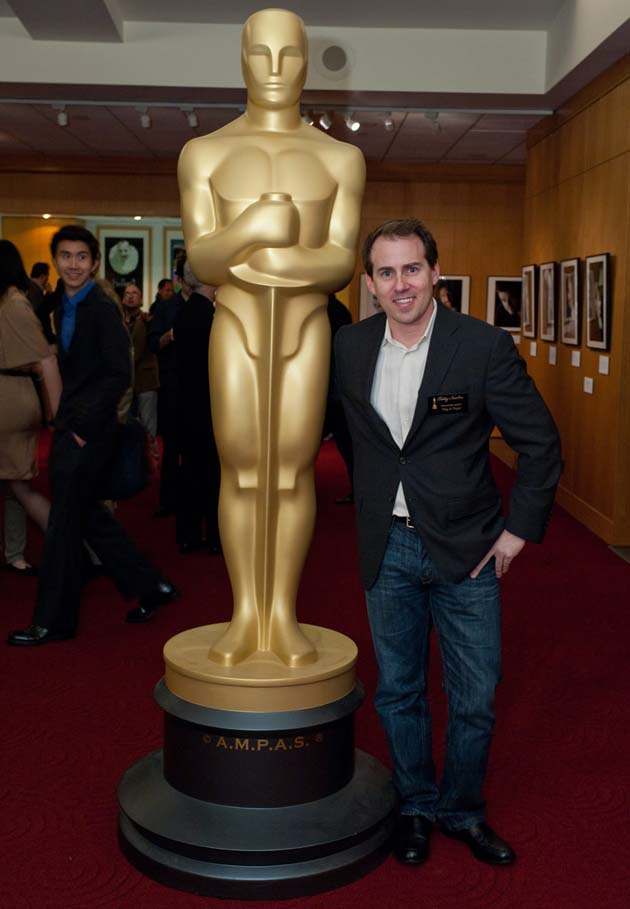 Teddy Newton, director of the Oscar-nominated animated short film Day & Night, is pictured above prior to the Academy of Motion Picture Arts and Sciences’ “SHORTS!” event on Tuesday, Feb. 22, ’11, at the Samuel Goldwyn Theater in Beverly Hills. Also in the running in the Best Animated Short Film category are:

“Get ready for the most interactive Academy Awards in history,” says Dave Karger at oscar.com. Oscar 2011 coverage begins on Sunday, Feb. 27, at 6 p.m. ET / 3 p.m. PT from the Kodak Theatre at Hollywood & Highland Center. Online viewers will apparently have to sign in to be able to check out reports from the red carpet, backstage, and the Governors Ball.

In the acting categories, the long list of nominees include Natalie Portman for Black Swan, Annette Bening for The Kids Are All Right, Michelle Williams for Blue Valentine, Melissa Leo, Amy Adams, and Christian Bale for The Fighter, and Colin Firth, Helena Bonham Carter, and Geoffrey Rush for The King’s Speech.

Here are a few more: Nicole Kidman for Rabbit Hole, Jesse Eisenberg for The Social Network, Jeff Bridges and Hailee Steinfeld for True Grit, and Jennifer Lawrence and John Hawkes for Winter’s Bone.

In the U.S., the 2011 Oscar ceremony will be broadcast live on ABC. 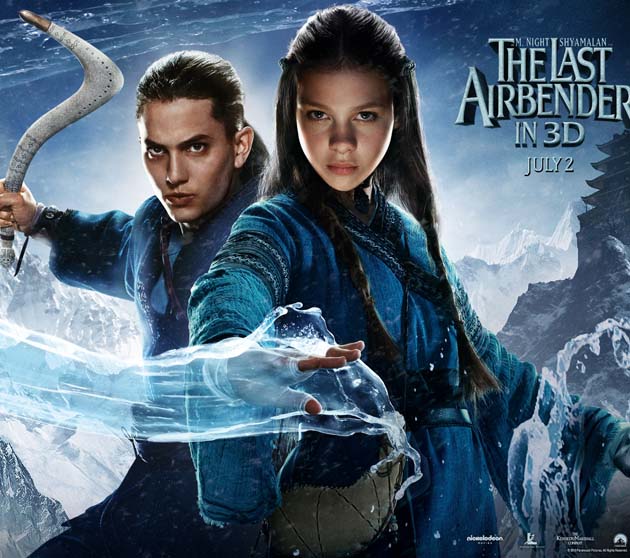 Much like the Academy Awards aren’t necessarily about the very best releases of any given year, the Razzies (a.k.a. the Golden Raspberry Awards) – the yang to the Oscars’ yin (or vice versa) – aren’t necessarily about the very worst releases of any given year. All too frequently, what matters is … What will get the attention of the media and moviegoers in general?

How about a major critical dud that managed to earn more than $100 million at the domestic box office? Enter M. Night Shyamalan’s The Last Airbender. How about a romantic fantasy franchise with a rabidly devoted fan base? Enter David Slade’s The Twilight Saga: Eclipse – and its stars, including Robert Pattinson, whose performance in Remember Me was hardly the stuff that Razzies are made of.

And how about Rocky/Rambo icon Sylvester Stallone doing just about anything? Enter The Expendables. And so on.

See below the list of the 2011 Razzies’ winners and nominees.