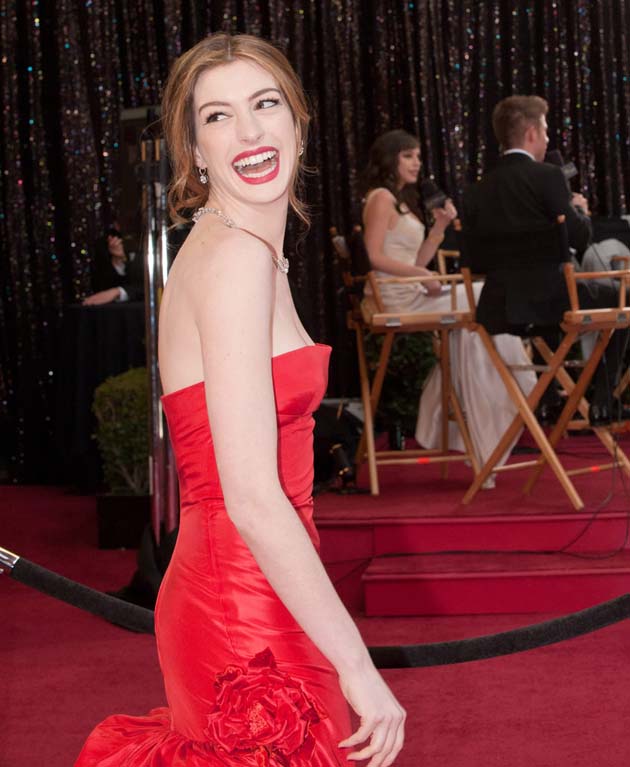 While on the Kodak stage on Feb. 27, this year’s Oscar host Anne Hathaway got to sing, tell jokes (“lesbians!”), and change gowns about two or three dozen times. Hathaway’s fellow Oscar host James Franco, who seemed to be having trouble staying awake, did his bit to keep TV viewers from dozing off by showing up in drag at one point.

Film critic Roger Ebert, for one, was unimpressed. On Twitter, he lambasted the show as “the worst Oscarcast I’ve seen, and I go back awhile. Some great winners, a nice distribution of awards, but the show? Dead. In. The. Water.”

Besides Roger Ebert, some media pundits have wondered if the 2011 Academy Awards ceremony – in large part thanks to hosts Anne Hathaway and James Franco – was the worst on record. If so … what about the Allan Carr-produced 1989 telecast?

Highlights of the (Oscar host-less) show included the following:

Regarding the Rob Lowe-Snow White segment, which at one point included Carmen Miranda-inspired dancers “dressed like tropical mixed drinks,” Los Angeles Herald-Examiner TV critic Andy Klein wrote: “The whole production number resembled the sort of nightmare you might have after imbibing too many such drinks.”[1]

Regarding the Oscar show itself, Allan Carr claimed that then U.S. President Ronald Reagan, past Best Supporting Actress nominees Janet Leigh and Candice Bergen (who was a presenter), and 1943 Best Actress Academy Award winner and David O. Selznick widow Jennifer Jones loved it. “In my opinion,” Jones purportedly wrote Carr, “you produced the Gone with the Wind of the Oscar shows.”[2]

An embarrassment to the Academy and the motion picture industry

Be that as it may, 17 Academy of Motion Picture Arts and Sciences members felt otherwise. They were:

In an official letter of complaint to the Board of Governors, the Academy 17 wrote:

The 61st Academy Awards show was an embarrassment to both the Academy and the entire motion picture industry. It is neither fitting nor acceptable that the best work in motion pictures be acknowledged in such a demeaning fashion. We urge the president and governors of the Academy to ensure that future award presentations reflect the same standard of excellence as that set by the films and filmmakers they honor.

Some of the Academy 17 are no longer with us. Here’s wondering what they would have thought of the 2011 Academy Awards ceremony.

I should add that the Allan Carr-produced ceremony – even if considered the most dismal ever – had no “Oscar host.” Theoretically, that means Anne Hathaway and James Franco could still be labeled the worst Oscar host combo ever.

The Nicholas Brothers were to have taken part in the segment, but their participation was cut. Doris Day was to have made an appearance as well, but a swollen ankle prevented her from fulfilling her commitment.

Later on, 1930s and 1940s 20th Century Fox superstar Alice Faye (Alexander’s Ragtime Band, Hello Frisco Hello) publicly complained that the Cocoanut Grove number had been relegated to an afterthought and that her participation had been reduced to that of “a dress extra.”

The Walt Disney Company wasn’t too happy either, notifying the Academy that they had (mis)used Disney’s version of Snow White without their permission.

Candice Bergen was nominated for Alan J. Pakula’s Starting Over (1979). She lost to Meryl Streep in Robert Benton’s Kramer vs. Kramer.

Jennifer Jones took home the Best Actress Oscar for Henry King’s The Song of Bernadette. She would be nominated four more times (Best Actress for Love Letters, 1945; Duel in the Sun, 1946; and Love Is a Many-Splendored Thing, 1955; Best Supporting Actress for Since You Went Away, 1944).

The information about the Nicholas Brothers and Doris Day via Robert Hofler’s Party Animals: A Hollywood Tale of Sex, Drugs, and Rock ‘n’ Roll Starring the Fabulous Allan Carr. 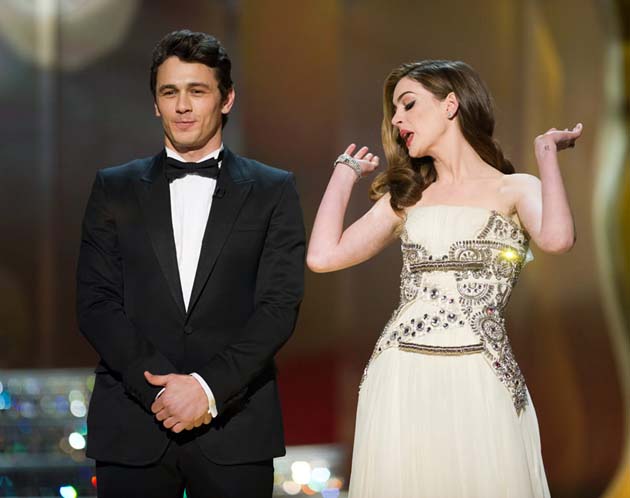 Oscar ratings down to one of lowest levels this century

The 2011 Oscar ratings were down 9 percent compared to last year, according to Nielsen results found at Deadline.com. In the much-coveted 18–49 age group, ratings were down 12 percent. (Citing preliminary Nielsen data, the Los Angeles Times reported a much more modest 2 percent drop for the 18–49 demo.)

It should also be noted that last year’s Oscar telecast had one definite advantage over this year’s. That’s James Cameron’s mammoth international blockbuster Avatar, which was in the running for Best Picture and eight other Academy Awards.

The much more modest The Hurt Locker, directed by Cameron’s former wife Kathryn Bigelow, was the eventual Best Picture winner.

This year’s biggest Oscar-nominated hits were Christopher Nolan’s sci-fier Inception, starring Leonardo DiCaprio, and Lee Unkrich’s Toy Story 3, featuring the voices of Tom Hanks and Tim Allen. Jointly, these two movies grossed about as much as Avatar in the U.S. and Canada. 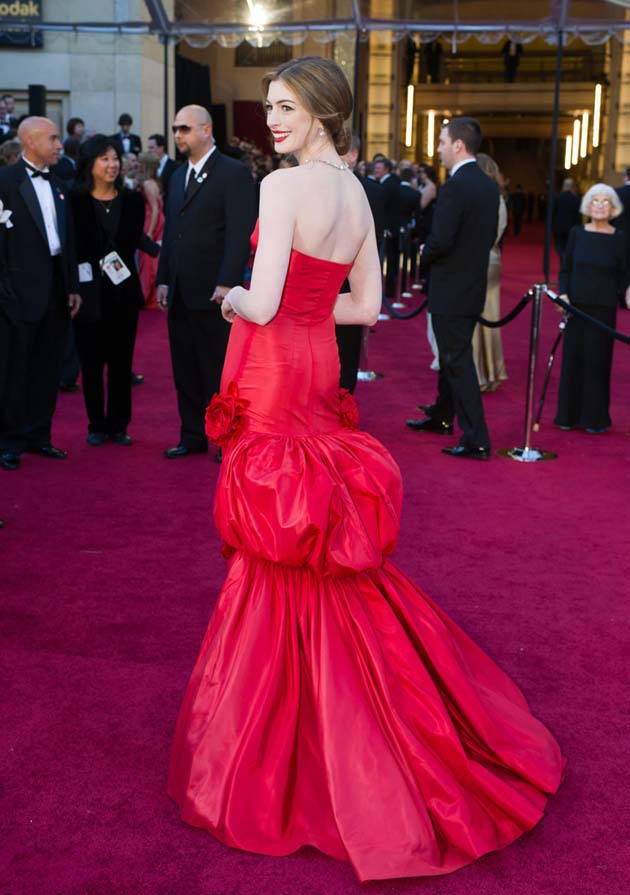 Pictured above is Oscar host Anne Hathaway sporting a blindingly bright white smile while on the 2011 Academy Awards’ Red Carpet just outside the Kodak Theatre in Hollywood.

But wait. In the photo, Hathaway is wearing a blindingly bright red gown. Wasn’t her dress of a metallic blue hue? Actually, no. It was beige (with patterns). Wait. Come to think of it, she actually wore a tux, not a dress.

Or maybe it was all of the above. And more.

How could that be?

Well, the color, texture, format, and type of Anne Hathaway’s outfits varied according to which 15 minutes of the Oscar telecast you watched on Sunday night, Feb. 27.

Below is a partial list of Anne Hathaway films.* Her big-screen debut took place in 2001. 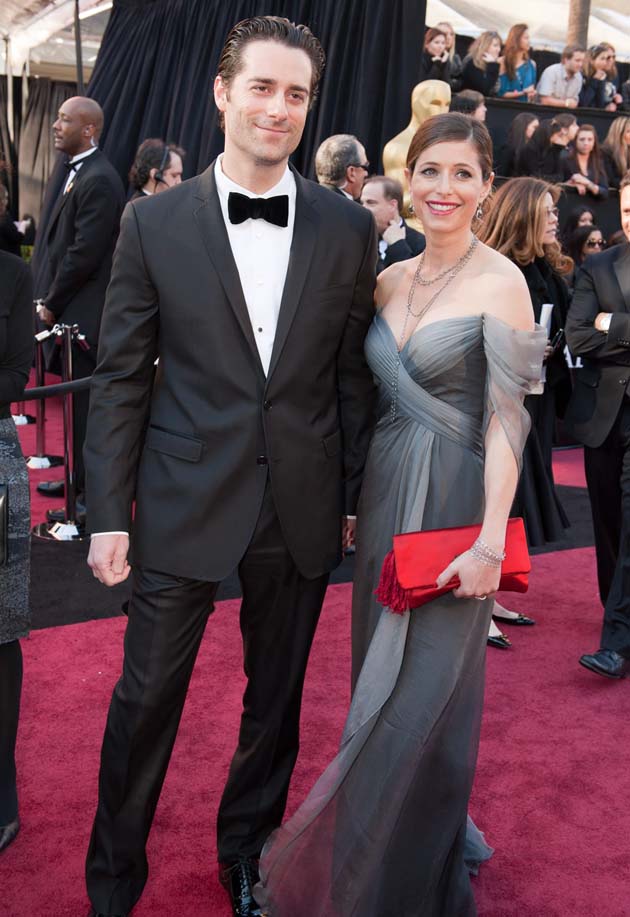 Todd Lieberman: ‘The Fighter’ producer at the Oscars

Todd Lieberman and wife Heather Lieberman arrive at the 2011 Academy Awards ceremony held on Feb. 27 at the Kodak Theatre in Hollywood. Lieberman is one of the producers of The Fighter, one of this year’s Best Picture nominees.

Mark Wahlberg was The Fighter‘s only major cast member who failed to receive an Academy Award nomination in the acting categories. Instead, along with Todd Lieberman and David Hoberman, Wahlberg was shortlisted as a producer of the Best Picture nominee.

The winner in that category turned out to be Tom Hooper’s The Weinstein Company-distributed The King’s Speech, featuring Colin Firth, Helena Bonham Carter, Geoffrey Rush, Guy Pearce, and Claire Bloom.

Among Todd Lieberman’s other producing credits are: 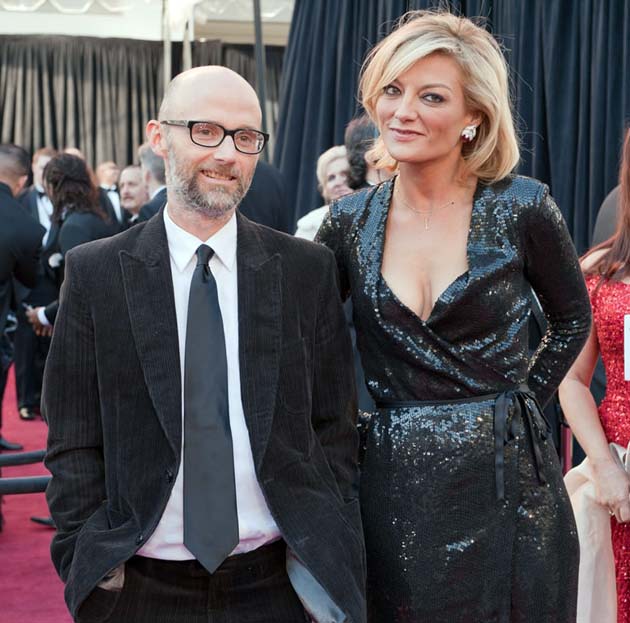 Lucy Walker and singer and composer Moby of the Oscar-nominated documentary ‘Waste Land.’

Moby composed the music for Waste Land. He was a Grammy nominee in 2002.

Co-Oscar 2011 nominee Angus Aynsley produced Waste Land, which tells the story of artist Vik Muniz and the waste pickers at Jardim Gramacho, located in the outskirts of Rio de Janeiro, and one the world’s largest open-air landfills.* 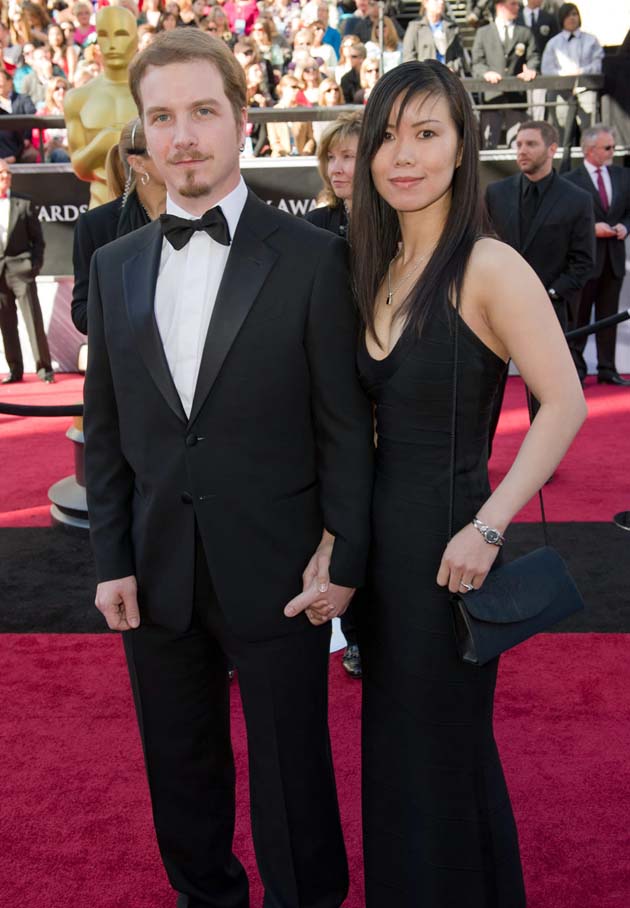 Besides Adrien Morot for Barney’s Version, the 2011 Oscars’ Best Make-Up contenders were:

Adrien Morot’s other movie credits include The Child Prodigy, Night at the Museum: Battle of the Smithsonian, Death Race, 300, and The Fountain. 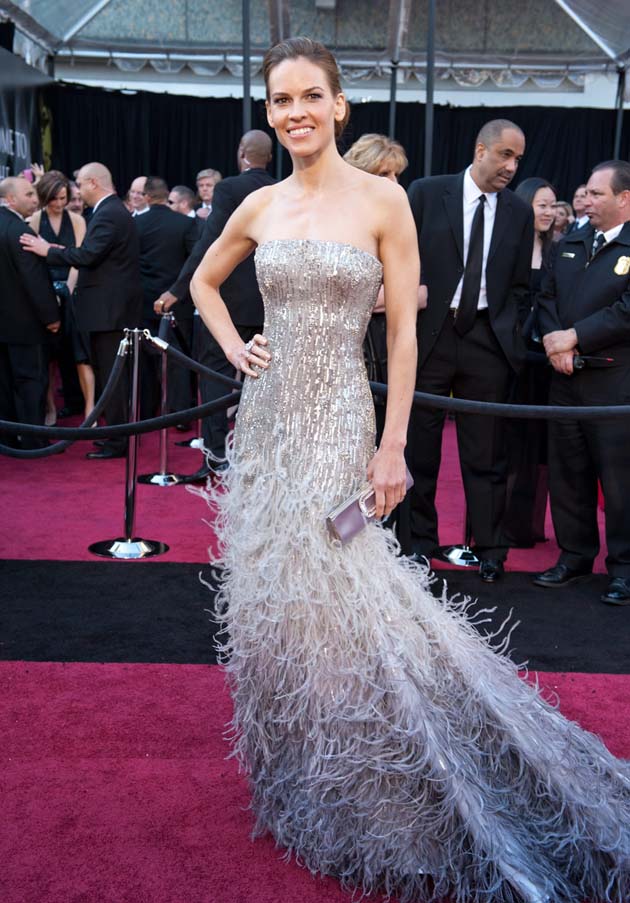 Pictured above is Hilary Swank, wearing an Oscar dress consisting of (what looks like) tons of frills and feathers, on the 2011 Academy Awards Red Carpet this past Sunday, Feb. 27.

Swank wasn’t nominated for anything, but she acted as a presenter of sorts at the Kodak Theatre in Hollywood.

These were her only two nominations as well.

Both times she beat Annette Bening, who was in the running this year once again for her role as a lesbian wife and mother in Lisa Cholodenko’s The Kids Are All Right, also featuring Julianne Moore, Best Supporting Actor nominee Mark Ruffalo, Josh Hutcherson, and Mia Wasikowska. 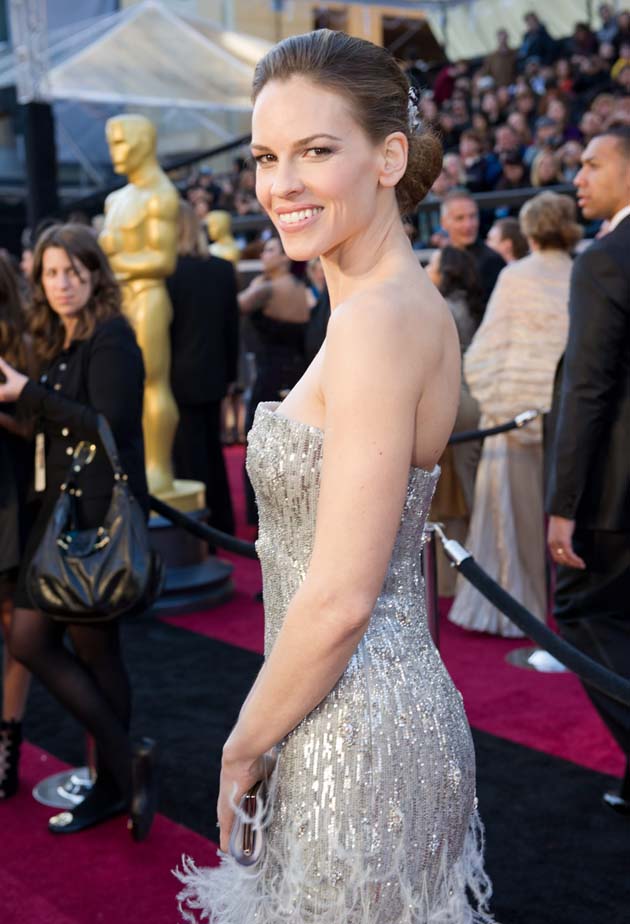 Here’s another image of this year’s Hilary Swank Oscar Dress, as seen on the Red Carpet outside the Kodak Theatre.

Even though Swank failed to be shortlisted for the 2011 Academy Awards, earlier this year she was a Best Actress contender at the Screen Actors Guild Awards for her performance in Tony Goldwyn’s little-seen Conviction. Curiously, The Kids Are All Right actress Annette Bening was once again her competitor.

As it turned out, they both lost to Natalie Portman for Black Swan. 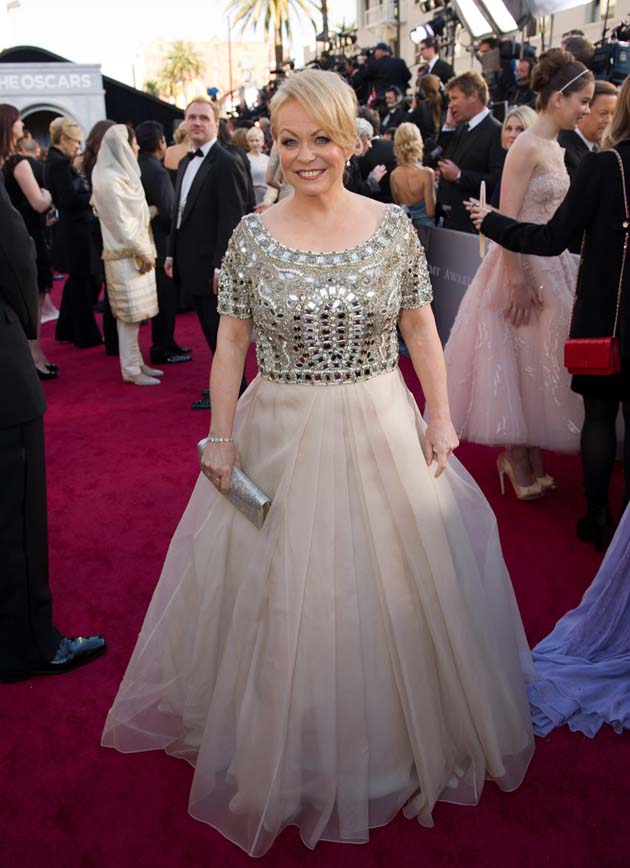 Jacki Weaver at the Oscars.

Jacki Weaver, one of this year’s Best Supporting Actress Academy Award contenders, is seen above arriving at the 83rd Academy Awards ceremony at the Kodak Theatre. Weaver was shortlisted for her work in David Michôd’s crime drama Animal Kingdom. As expected, the eventual winner was Melissa Leo for David O. Russell’s The Fighter.

Jacki Weaver has been a well-known actress in Australia for nearly four decades. She has already won two Australian Film Institute Awards: 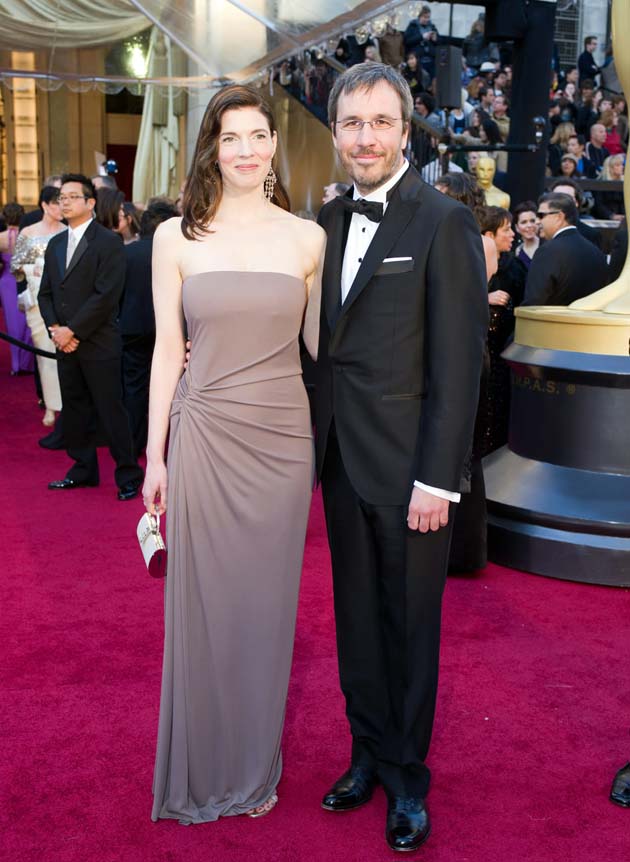 Denis Villeneuve, whose Incendies was an Oscar nominee in the Best Foreign Language Film category, is seen above on the 83rd Academy Awards’ Red Carpet, just outside the Kodak Theatre in Hollywood. Incendies lost to Susanne Bier’s In a Better World (Denmark).

The other competitors for the 2011 Best Foreign Language Film Oscar were: 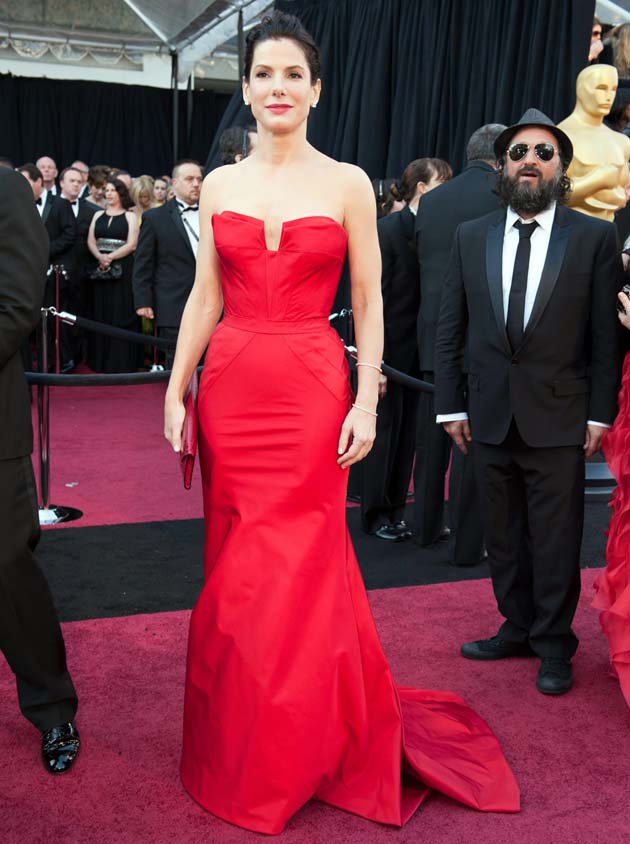 Sandra Bullock gown: The Oscars’ (other) Woman in Red

Wearing a dazzling red dress à la Anne Hathaway, Sandra Bullock is pictured above on the 2011 Oscars’ Red Carpet just outside the Kodak Theatre in Hollywood. The Oscarcast took place on Feb. 27.

Shortly after the 2010 Oscars, Sandra Bullock found herself enmeshed in a tabloid-engendered scandal that led to her separation from husband Jesse James.

On the positive side, U.S. exhibitors selected Bullock as 2009’s top box office attraction in the country. In addition to The Blind Side, her other major hit that year was Anne Fletcher’s The Proposal, co-starring Ryan Reynolds and veteran Betty White.

Sandra Bullock’s one 2009 box office disappointment was Phil Traill’s All About Steve, with Bradley Cooper. The widely panned comedy earned her a Razzie, thus making her the first – and to date only – Oscar-Razzie winner in the same year. 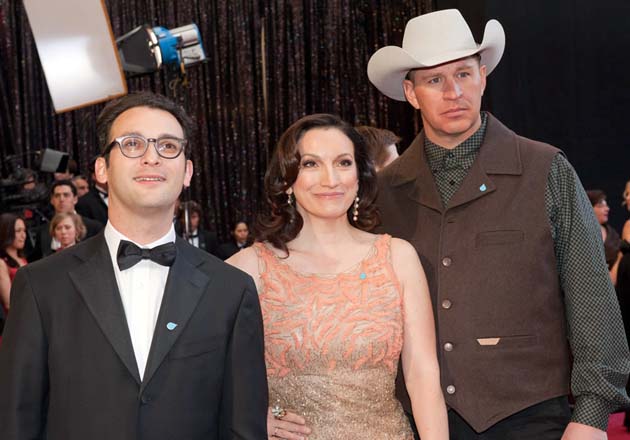 Also written by Josh Fox, GasLand shows how energy companies are stocking up on land throughout the United States. The reason for all that land-buying? Shale gas drilling through a controversial process known as hydraulic fracturing a.k.a. “fracking,” which has been blamed for a variety of environmental and human health problems.

GasLand lost the Best Documentary Feature Oscar to Charles Ferguson’s Inside Job, about the roots of the 2008 global economic meltdown.

I think she was good. It was mostly Franco´s fault who bailed on her, got high and left her alone, while he was too busy tweeting backstage.

And they will be down even further next year after what occurred this year. The King’s Speech’s undeserved win will not help gain an audience for this. A win for the much more deserved The Social Network might have given the young some continued interest in these awards, but instead we are still stuck in the past. The Academy needs to seriously look, before it is too late, as to who their membership is. When a nun who never had a career of much importance and who hasn’t been remotely in the business after near 50 years is still eligible to vote, there is something really, really wrong going on here. No offence to her, but if the Academy wants a future, they need to grow with the times and not hold on to the past.