Outfest Movies: From The New Twenty to Tru Loved 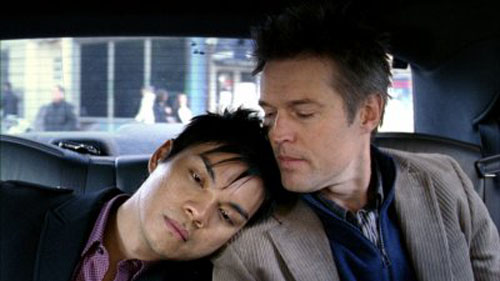 The 26th Los Angeles Gay & Lesbian Film Festival, Outfest 2008, will take place between July 9–21 at seven venues in the LA area, from downtown’s historic Orpheum Theatre to the open-air Ford Amphitheatre in the Hollywood Hills. As in previous years, the festival will be headquartered at the Directors Guild of America in West Hollywood.

Outfest 2008 will screen no less than 212 films and videos, including 65 features and 12 short film programs, from 25 countries. Additionally, the festival will feature about a dozen panels and special events, including the Outfest 2008 Achievement Award presentation to Donna Deitch (the director of the seminal 1986 lesbian romantic drama Desert Hearts), and more than 30 parties across town.

This year’s gala and centerpiece films are:

Opening Night Gala: Laurie Lynd’s Breakfast with Scot (July 9 at 8:00 pm at the Orpheum Theatre), starring Tom Cavanagh and Ben Shenkman, which is described as the story of “a fairly closeted gay couple that become temporary guardians of a recently orphaned 11-year-old boy, played by newcomer Noah Bernett, who has a penchant for feathered boas, rose hand cream and all that glitters.”

Dramatic Centerpiece: Directed by Tim Fywell from a screenplay by Andrew Davies (based on Sarah Waters’ novel), the Anglo-Canadian-Romanian co-production Affinity (July 16 at 7:00 pm at the DGA) is a drama set in Victorian London that “follows the life of Margaret Prior [Anna Madeley], an upper-class woman desperately trying to move past a lost love and her father’s recent death. She volunteers at Millbrook, a women’s prison, where she discovers new feelings for one of the detainees, Selina Dawes [Zoe Tapper], and her special supernatural powers. Passion, love and romance set the tone for Margaret’s new-found interest, while leading the way to a stunning and unexpected finale.” Also in the cast, Amanda Plummer and veteran Anna Massey.

Documentary Centerpiece: Shot in twelve countries and nine languages, Parvez Sharma’s A Jihad for Love (July 17 at 7:00 pm at the DGA), which began as a 20-minute work-in-progress at Outfest 2002, is described as “a groundbreaking film about love and faith in the Islamic society. Sharma’s brave subjects speak openly about the challenges of being gay/lesbian and Muslim: They share their deeply personal struggles to reconcile a faith that is part of the fabric of who they are, with a faith that also rejects them for who they love.”

Platinum Centerpiece: Matt Wolf’s Wild Combination: A Portrait of Arthur Russell (July 15, at 7:00 pm at the DGA), is a “portrait of the avant-garde composer / singer-songwriter / cellist and disco producer Arthur Russell. The film follows his life from his humble beginnings in Oskaloosa, Iowa to his death from AIDS in 1992.”

Awards Night: Directed by Tom Gustafson (who co-wrote the screenplay with Cory James Krueckeberg), Were the World Mine (July 20, 7:30 pm at the Ford Amphitheatre) is a new take on Shakespeare’s A Midsummer Night’s Dream, in which “games of love, mischief and wild imagination” begin after Timothy (Tanner Cohen) and Jonathon (Nathaniel David Becker) get cast opposite each other. At that point, “the all-boys high school gets so complicated that not even the coach is able to shut down the production and spare his boys from playing women’s roles.”

Closing Night Gala: Stewart Wade’s Tru Loved (July 21 at 8:00 pm at the Orpheum Theatre) , a teenage romantic comedy about Tru (Najarra Townsend), whose “life is anything but normal – she has two moms and two dads. She bravely sets out to establish a gay-straight alliance at her school and in the process gets everyone around her to toss out their preconceived notions, including her high school mates, who learn a precious lesson about being true to themselves.” Also in the cast: Jake Abel, Matthew Thompson, Alexandra Paul, and Star Trek‘s Nichelle Nichols.

We proudly conclude Outfest 2008 with a new film by Stewart Wade (Coffee Date), a charming romantic comedy and an unabashed gay contribution to the canon of teen films. Tru (short for Gertrude, as in Stein) is the new kid at her So Cal suburban high school. She has two moms, two dads, and everybody thinks shes the big dyke on campus. However, Tru is thrilled when Lo, a boy, asks her out. Hes gorgeous, the schools star quarterback, and on their second date he takes her to seethe Marvelous Wonderettes?

Did Trus world just get even gayer?

Blessed with her vivid imagination and strong sense of self, Tru sets out to discover her place at her school by founding a gay-straight alliance. With a fierce determination to fight for equal rights, Tru might just succeed in getting everybody around her to toss out their preconceived notions, open their minds, and be true to themselves and those they love.

The festival’s world premieres include Carolyn Coal’s documentary A Place to Live, about senior gays and lesbians attempting “to secure a home in Triangle Square, Hollywood, the nation’s first affordable housing facility for LGBT seniors”; Maurice Jamal’s Friends and Lovers: Ski Trip 2 (above), about “the lives, loves and mishaps of three diverse couples living in Los Angeles, and their eccentric circle of friends”; and Andrea Meyerson’s documentary Laughing Matters…Next Gen, which features “new talent on the LGBT comedy circuit.”

Also, Chris Mason Johnson’s dramatic comedy The New Twenty (above), about the personal travails of five New York City college friends of various sexual orientations; Nilanjan Neil Lahiri’s The Ode (top photo), a film adaptation of Ghalib Shiraz Dhalla’s novel Ode to Lata, which intertwines “the doomed but passionate love story of Parin and Shiraz with the tempestuous life of their gay son Ali who discovers that the past is always present no matter how far you run”; and Randy Olson’s mockumentary Sizzle, in which Olson “plays himself, an uptight filmmaker on a mission to tell the scientific truth about the state of the planet.”

This year’s Four in Focus films, a showcase of efforts by first-time feature film directors, will screen the aforementioned The New Twenty; Brian Pera’s The Way I See Things, about a grieving man who, during a road trip, “winds up at a new-agey commune where members are encouraged to get in touch with their ‘authentic self’”; Jennifer Phang’s Half-Life, which “focuses on a Northern California community struggling to adapt as global chaos looms”; and Luke Eberl’s Choose Connor, in which “a bright teenager learns far more about politics than he’d ever imagined when he falls under the sway of charismatic congressman Lawrence Connor (Steven Weber, Wings) and his handsome young nephew Caleb (Escher Holloway).”

The Platinum section will honor filmmaker, photographer and columnist Bruce La Bruce. LaBruce, who has a penchant for adding sexually explicit scenes to his cinematic romps (that’s great, though I could do without all the blood and guts), will appear in-person at two screenings: Otto; Or, Up With the Dead People (above, July 11 at 9pm at the Redcat), about a cute neo-Goth zombie, Otto (Jey Crisfar), suffering from an identity crisis, and Super 8½ (July 13 at 7:30 p.m. at the Fairfax 2 Theater).

The Outfest Legacy Project will screen its second restoration project (in collaboration with the UCLA Film & Television Archive): the 1978 documentary Word is Out: Stories of Some of Our Lives (July 14 at 8:00 pm at the DGA), directed by the Mariposa Group, a collective of filmmakers that included Harvey Milk‘s Rob Epstein.

As per the Outfest press release, “even though it has a homosexual theme, at heart, Word is Out is more of a touching reportage that captures the lives of 26 people – ranging in age from 18 to 77, from San Francisco to New Mexico to Boston.”

The Outfest Panels will feature discussions about LOGO’s Sordid Lives: The Series, with the participation of the series’ director Del Shores, and actors Margaret Cho, Rue McClanahan, and Olivia Newton-John, and “Exploring the ‘B’ in LGBT,” which will focus on bisexuality. (Now, how that term should be defined will surely engender enough debate to last until Outfest 2009 – and probably beyond.)

And finally, Boom!, the second annual Outfest Music Festival, will showcase “a diverse lineup of musicians from rock to hip hop” – including Yo Majesty, DJ Ipek, and Macka – at The Troubadour on July 19.