The son of migrant fruit pickers, he was born Noriyuki Morita on June 28, 1932, in Isleton, a small community in Northern California. After spending a large part of his childhood hospitalized with spinal tuberculosis, Morita – by then nicknamed “Pat” – recovered in time to join his family in Arizona’s Gila River internment camp for Japanese and Japanese Americans during World War II.

“I have many memories of those day at the camp, but no scars,” Pat Morita would tell The Associated Press‘ Bob Thomas in 1986. “The memories will always haunt me, but I prefer not to dwell on them. I think more about today and tomorrow, and how far we have come since those war times. Hopefully we Americans will never do that to each other again.”

Morita entered show business in the early 1950s, as a stand-up comedian in nightclubs and bars, while keeping his day job working with computers at Aerojet General. One stand-up routine centered on how he “became black” the day after the Japanese attack on Pearl Harbor.

In a film career that spanned nearly five decades, Pat Morita was featured in dozens of movies, mostly in minor supporting roles. If the IMDb is to be believed, he made made his film debut in a small part in Yoshinori Wada’s 1964 Japanese drama Car Thieves / Jidôsha dorobô.

Besides The Karate Kid and its sequels (more on these below), among Morita’s films were the following: 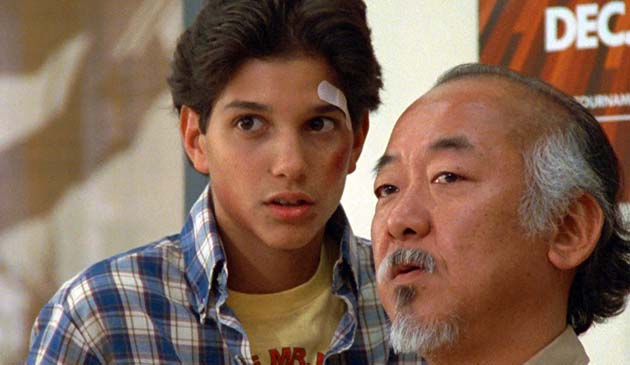 Written by Robert Mark Kamen, The Karate Kid was directed by John G. Avildsen, who had won an Academy Award for handling the similarly themed boxing drama Rocky, in which Burgess Meredith trains boxer Sylvester Stallone, while the latter becomes romantically involved with Talia Shire.

The centuries-old formula worked in the mid-1980s as well. The Karate Kid became one of the decade’s biggest sleeper hits; made for a reported $8 million, the “inspirational” drama brought in $90.81 million at the North American box office alone.

For his efforts, Pat Morita received his one and only Academy Award nomination, in the Best Supporting Actor category. Curiously, he lost to an actual (South)East Asian, Cambodian doctor (and non-professional actor) Naing S. Ngor, for his work in Roland Joffé’s political drama The Killing Fields.

Inevitably, The Karate Kid led to several sequels, but the franchise lost steam rather rapidly. Once again directed by John G. Avildsen, written by Robert Mark Kamen, and starring Ralph Macchio and Pat Morita, The Karate Kid, Part II (1986) collected $115.2 million domestically, despite less-than-enthusiastic reviews. But the same team effort notwithstanding, The Karate Kid, Part III (1989) was a major dud, cuming at a mere $38.95 million.

A 1994 spin-off, The Next Karate Kid, directed by Christopher Cain, written by Mark Lee, and starring future two-time Oscar winner Hilary Swank (Boys Don’t Cry, 1999; Million Dollar Baby, 2004) brought Pat Morita back as Kesuke Miyagi – now promoted to Sergeant. The film turned out to be a major box office bomb, collecting only $8.91 million in the U.S. and Canada.

On television, The Karate Kid was the basis for a 1989 animated series, with Pat Morita providing the voice of one of its characters. And let’s not forget the 2004 TV movie The Karate Dog, directed by Bob Clark, and featuring Simon Rex, Jon Voight, Jaime Pressly, Thomas Kretschmann, and Chevy Chase’s voice. In a supporting role, Morita played the character Chin Li.

Besides the animated The Karate Kid and The Karate Dog, Pat Morita kept himself busy elsewhere on U.S. TV, guesting on dozens of shows throughout the decades, among them Green Acres, Blondie, Happy Days, Police Woman, Burke’s Law, and, as Master Udon, SpongeBob SquarePants.

Additionally, Morita had recurring roles in several TV series, including Sanford and Son, The Mystery Files of Shelby Woo, Baywatch, and Happy Days, in which he played Matsuo ‘Arnold’ Takahashi, owner of the diner Arnold’s.

Regarding Pat Morita’s death, Ralph Macchio said in a statement:

It was both my honor and privilege to have worked with him and create a bit of cinema magic together. My life is all the richer for having known him. I will miss his genuine friendship.

Images of Ralph Macchio and Pat Morita in the 1984 The Karate Kid: Columbia Pictures.