Pictured above are Patrick Duffy and Linda Gray with Diane Lane and Josh Brolin on the 2012 SAG Awards’ Red Carpet, just outside Los Angeles’ Shrine Auditorium on Jan. 29.

Television veterans Patrick Duffy (Man from Atlantis, The Bold and the Beautiful) and Linda Gray (Haywire, Melrose Place) were presenters at the SAG Awards ceremony, along with fellow Dallas alumnus Larry Hagman. Although better known for their TV work, both Duffy and Gray have been featured in a handful of movies, including:

Diane Lane was a nominee this year in the Best Actress in a Television Movie or Mini-Series category for Cinema Verite. She lost to Kate Winslet in Mildred Pierce. The other nominees were:

Kate Winslet, who has already won a Golden Globe and an Emmy for the old Joan Crawford role (in Michael Curtiz’s Oscar-nominated 1945 movie), did not attend the ceremony.

Diane Lane has a previous SAG Award nomination: Best Actress in a Motion Picture for her performance as a married woman (to Richard Gere) having an affair with a younger man (Olivier Martinez) in Adrian Lyne’s crime melodrama Unfaithful (2002). That role also earned Lane her sole Academy Award nomination to date. (She lost to Nicole Kidman in Stephen Daldry’s The Hours.) 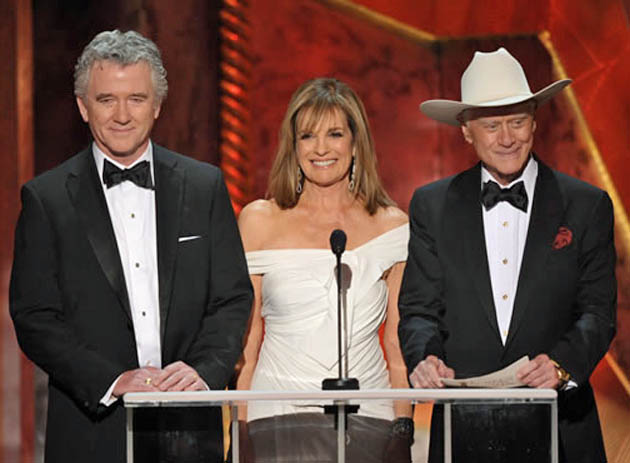 Dallas veterans Linda Gray, Larry Hagman, and Patrick Duffy were presenters at the 18th Screen Actors Guild Awards, which took place on Jan. 29, ’12, at the Shrine Auditorium in Los Angeles.

Curiously, there has never been a big-screen version of Dallas. Or of its two rival ’80s soap operas, Dynasty and Falcon’s Crest.

Hagman, Linda Gray, and Patrick Duffy will all be seen in the upcoming Dallas reboot directed by Michael M. Robin and Steve Robin. 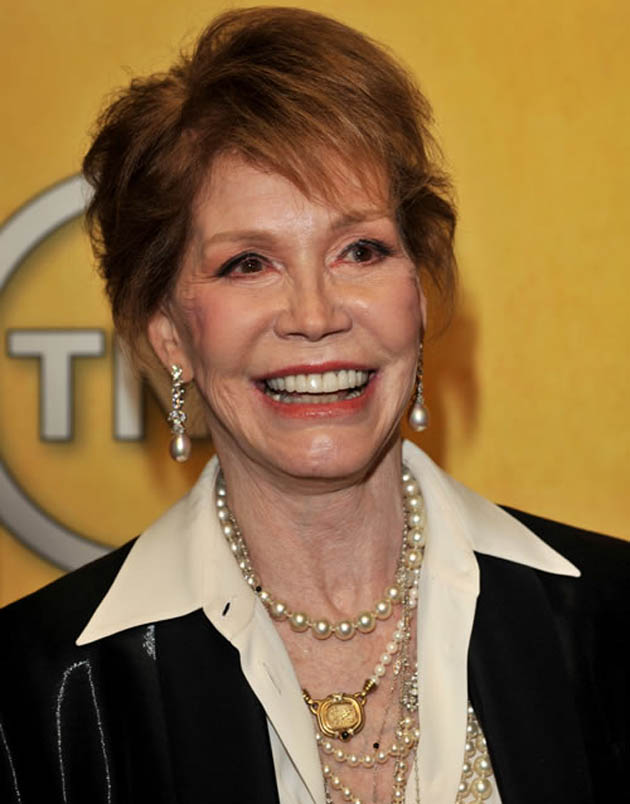 Mary Tyler Moore was the recipient of the Screen Actors Guild’s 2012 Life Achievement Award; the award presentation took place on Jan. 29 at Los Angeles’ Shrine Auditorium. Dick Van Dyke, with whom Moore had co-starred in The Dick Van Dyke Show in the early 1960s, handed her the award.

The 75-year-old Moore, who has suffered from a series of health ailments including diabetes and brain surgery to remove a benign tumor last year, looked quite frail while accepting her trophy. She was greeted by the longest standing ovation of the evening.

During her acceptance speech, she reminisced about the overabundance of actresses named Mary Moore registered with the Screen Actors Guild back in the 1950s. That’s when the newcomer decided to use her father’s middle name, Tyler, as part of her show business moniker.

Curiously, Mary Tyler Moore – whose television heyday was in the ’60s and ’70s, and whose most important film roles were in the late ’60s and early ’80s – has never been nominated for a SAG Award.

For her work on the big screen, Mary Tyler Moore received a Best Actress Oscar nomination for Robert Redford’s Ordinary People (1980), in which she played the emotionally distant wife and mother of, respectively, Donald Sutherland and Timothy Hutton. She lost to Sissy Spacek in Michael Apted’s Coal Miner’s Daughter. 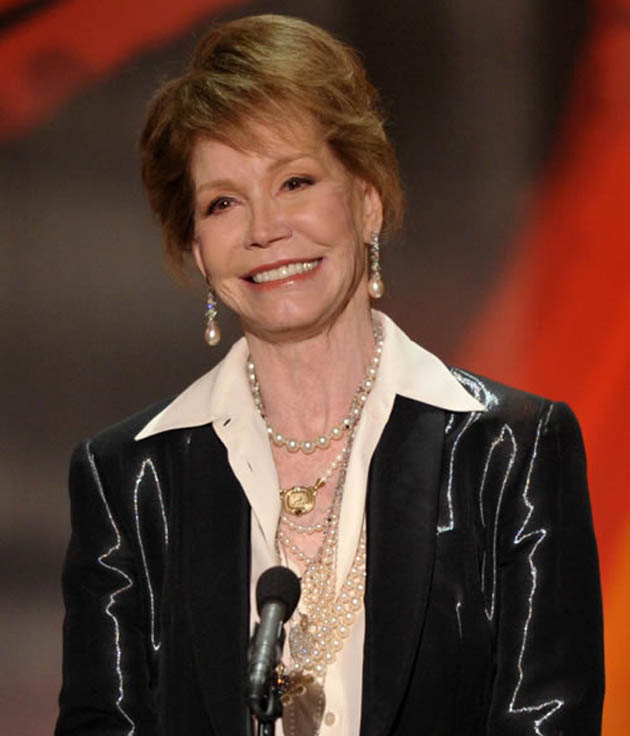 Betty White, by the way, was in contention this year in two categories: 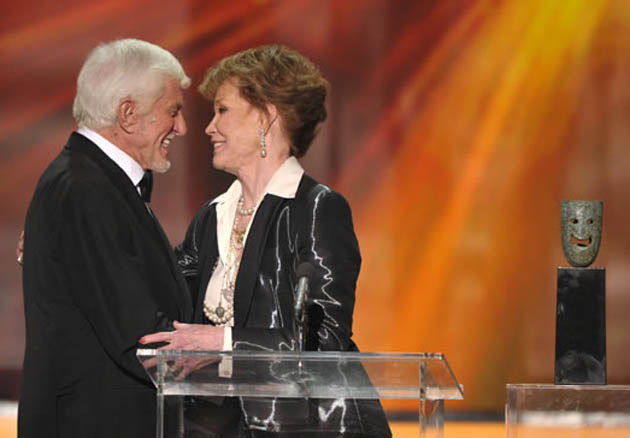 In the picture above, Dick Van Dyke and Mary Tyler Moore are seen onstage at the 2012 Screen Actors Guild Awards ceremony, held at the Shrine Auditorium on Jan. 29 in Los Angeles. Moore herself reportedly chose Van Dyke, her co-star in The Dick Van Dyke Show back in the early ’60s, to present her with the Screen Actors Guild Life Achievement Award.

Following a series of health ailments, including diabetes and brain surgery to remove a benign tumor last year, Moore looked quite frail while accepting her trophy. On a positive note, she received the longest standing ovation of the evening – twice, in fact, as people stood up to applaud her even though all they got to see the first time around were a series of samples of her long film and television career, in addition to clips showing her longtime dedication to animal welfare and to the discovery of a cure for diabetes.

Among the movie clips, were bits showing Mary Tyler Moore dancing with Julie Andrews in George Roy Hill’s Thoroughly Modern Millie (1967) and, as a lovestruck nun, declaring her feelings for Elvis Presley in Change of Habit (1969). Needless to say, The Mary Tyler Moore Show was also part of the compilation, along with her Academy Award-nominated tour de force in Robert Redford’s Best Picture Oscar winner Ordinary People (1980), co-starring Donald Sutherland and Timothy Hutton.

For the second standing ovation – after the clips were over – Moore was already onstage. (TV audiences never saw how she got there.) At the end of her speech, the camera remained on Moore, who seemed unsure of what to do next. In a moving display of tenderness and support, Van Dyke came over to her and gave her kiss. Then it was time to cut to commercials.

Besides the aforementioned names, two The Mary Tyler Moore Show alumni have already been given the award: Edward Asner in 2001 and Betty White in 2009.