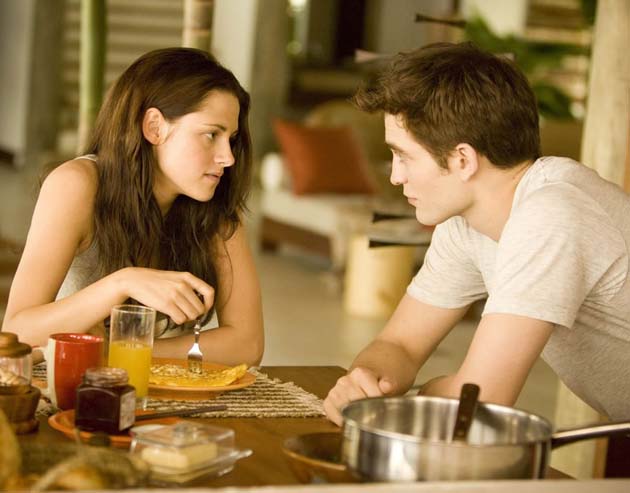 May 9 update: In The Twilight Saga: Breaking Dawn – Part 1, after their wedding ceremony Edward Cullen (Robert Pattinson) takes Bella Swan (Kristen Stewart) to Brazil. That’s where Bella and Edward spend their fateful honeymoon on the otherwise idyllic Isle Esme off the coast of Rio de Janeiro.

In the previous three Stephenie Meyer books – Twilight, New Moon, and Eclipse – Bella and Edward have enjoyed a remarkably (or appallingly, depending on your take) chaste romantic relationship. Things radically change once they have tied the knot at the beginning of the fourth and final novel in the series, Breaking Dawn.

The above photo shows the recently married Bella and Edward kicking back in the Cullen family’s resort house on Isle Esme – actually, an island off of the colonial coastal town of Paraty, just south of Rio.

That’s where the couple enjoy their mutual interspecies bliss until things come (bone-)crashing down following a night of wild vampire-human sex. Which you’ll surely not get to see – not even obliquely – in this PG-13-rated film.

And that’s where they beget what will eventually become the hybrid Renesmee – who, unwittingly, almost leads to the demise of the Cullen coven. 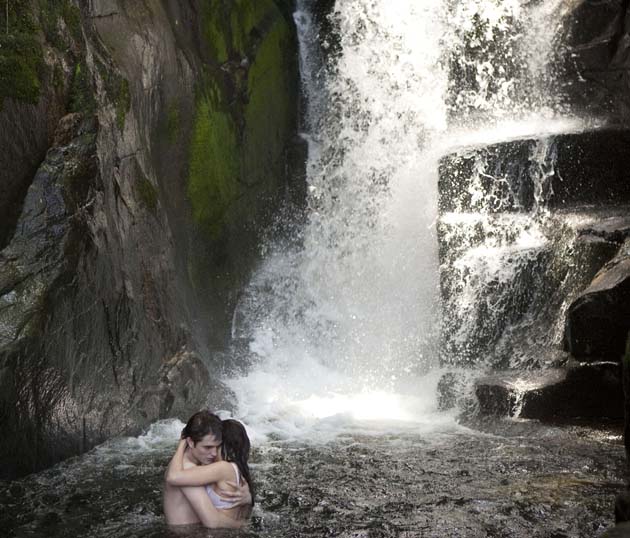 Above is another image from Breaking Dawn – Part 1. Bella and Edward are seen all wet in the by now world-famous waterfall sequence shot in Rio (or its vicinity). 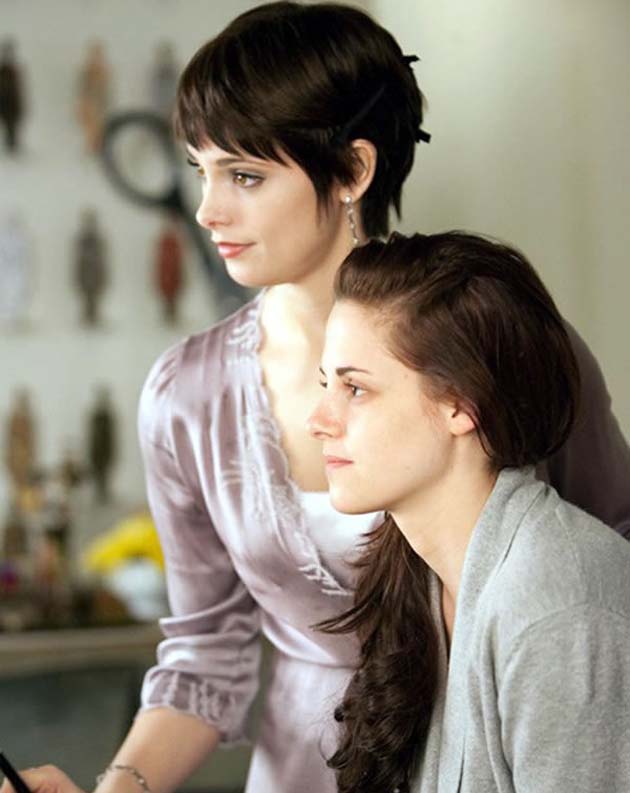 Above are Kristen Stewart a.k.a. Bella Swan and Ashley Greene as Alice Cullen. The human Bella is about to get married to the “vegetarian” vampire Edward, which means she may – or may not – have to be turned into a vampire herself. Alice doesn’t seem to care either way – as long as Bella looks like a presentable bride.

Alice is Edward’s clairvoyant “sister.” By being able to foresee stock market “trends,” she helps to keep the family’s fortunes expanding ever more. Really, the Cullens are not only much stronger, but also much wealthier than Superman, Iron Man, and Batman put together. They are recession-proof too.

Besides Robert Pattinson, Kristen Stewart, and Ashley Greene, the cast includes the following:

A Summit Entertainment release, Breaking Dawn – Part 1 opens Nov. 18 in North America and several other territories. Part 2, the final installment in the five-movie franchise, will come out in fall 2012. 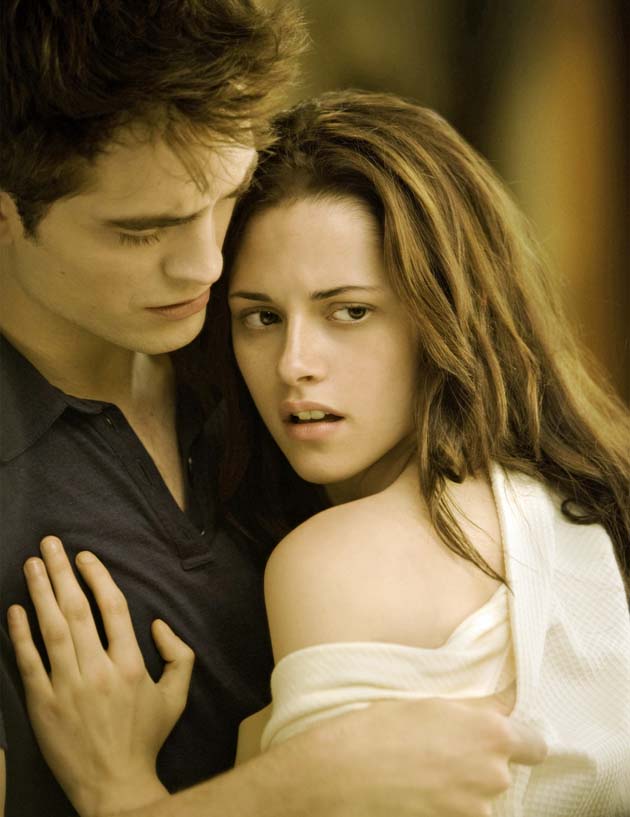 ‘Breaking Dawn – Part 1’ image with Kristen Stewart and Robert Pattinson: This is surely about as sexy and ‘risqué’ as it gets.

Except, that is, for those who have a lot of imagination.

In sum, the above image (posted May 8, ’11) showing Robert Pattinson and a bare-shouldered Kristen Stewart is in all likelihood as steamy as anything related to a Twilight movie is ever gonna get.

Also in the extensive cast of the fourth entry in the Twilight Saga movie franchise:

The three previous Twilight Saga movies, all featuring Robert Pattinson, Kristen Stewart, and Taylor Lautner (who has a supporting role in the first entry), are:

Kristen Stewart was recently featured in Floria Sigismondi’s The Runaways, with Dakota Fanning, and Walter Salles’ On the Road, with Garrett Hedlund and Sam Riley.

Early last year, Taylor Lautner was one of the many stars in Garry Marshall’s Valentine’s Day, also featuring the likes of: 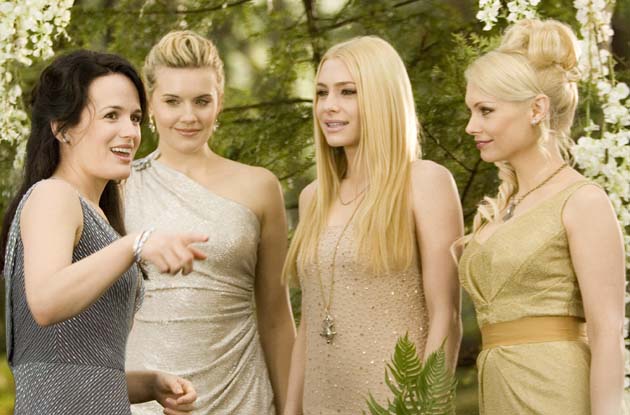 The producers of Breaking Dawn – Part 1 seem to be aiming for an Academy Award in the Best Costume Design category. Among the fancy-looking creations of two-time Costume Designers Guild nominee Michael Wilkinson (300, Babel) – and/or of his assistants – are those found in the picture, with surely more to come.

The Denali Coven hails from Alaska. Like the Cullens, they’re “vegetarian” vampires – which means non-human blood drinkers, not lettuce eaters.

Speaking of blood, there’s a mix of good blood and bad blood between the Denalis and the Cullens. Too long a story for this post, but I can tell you now that one Denali family member, Irina, will play a crucial role in Breaking Dawn – Part 2.

Irina at the wedding

That is, unless screenwriter Melissa Rosenberg thoroughly revamps Stephenie Meyer’s fourth and final installment in the The Twilight Saga literary series. After all, Maggie Grace’s Irina is clearly visible in the image above, even though, if I remember it correctly, she doesn’t attend Edward and Bella’s wedding.

‘Breaking Dawn’ ‘most exciting thing’? Your guess is as good as anybody’s

More Taylor Lautner: when asked what the “most exciting thing” about filming the two-part The Twilight Saga: Breaking Dawn, Taylor Lautner told MTV that it was hard to pick one scene because there have been so many during the five-month shoot.

Gods and Monsters and Kinsey filmmaker Bill Condon is the director of Breaking Dawn – Part 1 and Breaking Dawn – Part 2, both based on the fourth and (to date) final installment in Stephenie Meyer’s Twilight Saga literary series. Kristen Stewart and Robert Pattinson are Lautner’s co-stars.

After his initial hesitation, Taylor Lautner added the following:

Recently we did a scene in the backyard of the Cullen house where Bella gets mad at me. She just learned that I imprinted on her daughter [the human-vampire hybrid Renesmee] and she is literally throwing me around the backyard. So, it was really fun to see Kristen try and act all tough and, you know, she’s a vampire and she’s chucking me across the yard into trees and stuff. It was funny.

For those who don’t know, “imprinting” is a form of involuntary, shall we say, very close – though not necessarily sexual – attachment between a werewolf and a significant other, no matter how young.

Robert Pattinson’s Edward Cullen and Kristen Stewart’s Bella Swan in bed during their honeymoon, Bella’s transformation into a vampire, and Bella’s baby delivery are some of the Twilight Saga: Breaking Dawn images that were illegally leaked online yesterday.

Summit Entertainment has acted swiftly to prevent sites from posting those stills and screen grabs, but the “damage” – if any, really – has been done. Fans who wanted to check out those images yesterday were able to do so. (The Pattinson-Stewart photo above was released months ago.)

Below is an open letter from Breaking Dawn author and co-producer Stephenie Meyer, whose Midnight Sun manuscript was leaked before completion a few years ago; co-producer Wyck Godfrey; director Bill Condon; and Summit Entertainment:

As some of you may know, pictures and screen grabs of The Twilight Saga: Breaking Dawn as a work in progress have leaked on the internet. We are extremely proud of this film and also extremely heartbroken to see it out there at this stage.

The film and these images are not yet ready or in their proper context. They were illegally obtained and their early dissemination is deeply upsetting to the actors, the filmmakers and Summit who are working so hard to bring these movies to fruition to you in November 2011 and November 2012.

Please, for those who are posting, stop. And please, though the temptation is high, don’t view or pass on these images. Wait for the film in its beautiful, finished entirety to thrill you.

It looks like Kristen Stewart and Robert Pattinson have died in gone to heaven. Why that shiny orange coloring? Is the movie that way? If it isn’t, then it makes no sense unless they wanted an aura of angelic purity surrounding the 200yearold Pattinson vampire having sex with the teenage human.