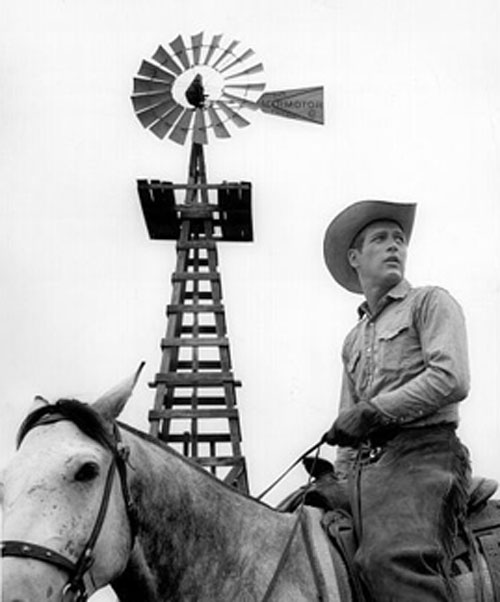 Paul Newman, who died this past Sept. 26 at age 83, will be the Star of the Day on Turner Classic Movies this Sunday, Oct. 12.

There are no Newman rarities in the program. But come to think of it, there may not be any really rare Paul Newman star vehicles out there, as most – perhaps all – of his motion picture work is available on either video or DVD, or has been shown on television.

In any case, the top recommendations for Paul Newman Day are Until They Sail (1957) – which I admit I still haven’t seen, but with a cast that includes Newman, Jean Simmons, Joan Fontaine, and Piper Laurie, it simply can’t be bad. And even if it is bad – the story revolves around sisters enmeshed with American soldiers on their way to some World War II action in the South Pacific – Until They Sail would still be worth watching because of its cast. Robert Wise, whose efforts range from so-so to excellent, directed. All this and Sandra Dee, too.

Directed by Martin Ritt from a screenplay by frequent collaborators Irving Ravetch and Harriet Frank Jr. (based on Larry McMurtry’s novel), Hud (1963) is one of the best American movies of the 1960s. The story of a selfish, irresponsible, ruthless cowboy (Newman) who discovers – a little too late, perhaps – that everyone has to grow up one day, Hud is that rare Hollywood production that exudes both talent and intelligence. In the title role, Newman is fine as the spoiled cad, and so is Brandon De Wilde as his younger brother. That said, Hud actually belongs to Academy Award winners Patricia Neal and Melvyn Douglas, who deliver two of the greatest performances I’ve ever seen. As a plus, the film boasts masterful black-and-white cinematography by Academy Award winner James Wong Howe.

Rachel, Rachel (1968), Newman’s directorial debut, is a remarkable drama, adapted by Stewart Stern from Margaret Laurence’s novel about a plain-looking, insecure, small-town school teacher who seems incapable of finding happiness in love or in life. New York Film Critics Circle best actress winner Joanne Woodward is superb in the title role, being well-supported by Estelle Parsons and Geraldine Fitzgerald. It’s too bad that Newman – who was chosen the best director of the year by the New York scribes – didn’t make as many films as a director as, say, the way overrated Clint Eastwood – as Newman had both vision and sensitivity to spare behind the cameras.

The flag-waving Exodus (1960, above), about the founding of Israel, is probably one of Newman’s worst films and performances (and almost surely Otto Preminger’s worst production as well), while Sweet Bird of Youth (1962), directed and adapted by Richard Brooks, is a disappointing rendition of a Tennessee Williams play (though eons better than the made-for-TV remake starring Elizabeth Taylor). Geraldine Page, however, has some good moments as a neurotic actress tripping away with a hunky escort.

The earlier Cat on a Hot Tin Roof (1958, with Elizabeth Taylor), which broke new ground because it (sort of) deals with homosexuality, is another Newman vehicle directed by Brooks and based on a Tennessee Williams play. The original isn’t all that good to begin with, while the glossy MGM adaptation is much too bowdlerized to either have any dramatic impact or make any sense.

Both Torn Curtain (1966) and Cool Hand Luke (1967) have their admirers. I’m not one of them. The former is absurd and tedious; the latter is tedious and absurd – and worse, yet, the makers of this messy, meandering melodrama believed they had an Important Message to convey about non-conformism vs. social oppression. (One Flew Over the Cuckoo’s Nest tackled the same theme much more effectively.) George Kennedy earned a best supporting actor Oscar for his turn as one of the convicts wasting away in a Southern prison, but the best performance – by far – in Cool Hand Luke is that of Jo Van Fleet in what (unfortunately) amounts to a cameo. (Van Fleet, one of the best and most underused – by Hollywood – actresses of the last century, is the one who should have been cast in the lead in Sweet Bird of Youth.)