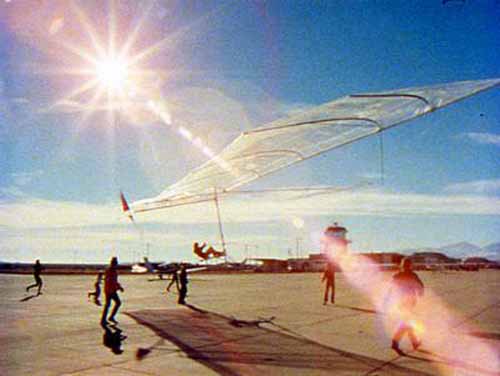 Next in “Oscar’s Docs, Part Three: Academy Award-Winning Documentaries 1977–1988,” The Flight of the Gossamer Condor, Paul Robeson: Tribute to an Artist, and Best Boy will be screened on Monday, September 24, at 7:30 p.m. at the Academy of Motion Picture Arts and Sciences’ Linwood Dunn Theater in Hollywood.

The 1978 short subject documentary winner The Flight of the Gossamer Condor (top photo) tells how the recently deceased Paul MacCready and his team created the first successful human-powered – i.e., pedal-powered – flight. Producer-director Ben Shedd will participate in a post-screening discussion.

Saul J. Turell’s Paul Robeson: Tribute to an Artist (right), the 1979 short subject documentary winner, gives a glimpse into the life and career of the multitalented – actor, singer, athlete, scholar, linguist – Paul Robeson, who also happened to be a (eventually blacklisted) political activist for liberal causes. Narrated by Sidney Poitier.

The retrospective will present the best available prints, often featuring newly struck or restored editions from the documentary collection of the Academy Film Archive. The series will continue each Monday evening through November 19 and will be complemented on many nights with on stage discussions with the filmmakers (schedules permitting).

Who Are the DeBolts? And Where Did They Get Nineteen Kids? (1977)
Post-film discussion with producer John Korty

The Ten-Year Lunch: The Wit and Legend of the Algonquin Round Table (1987)

When most people think of animation, the words “Disney” and “Pixar” are the first that pop up in their heads.

Since I’m not most people, when I think of animation what pops up in my head is the National Film Board of Canada (NFB).

So, I’m happy to report that the NFB and the Academy of Motion Picture Arts and Sciences will present the 11th Marc Davis Celebration of Animation, whose theme will be “Canadian Women in Animation.” The event will take place on Wednesday, October 17, at 7:30 p.m. at the Academy’s Samuel Goldwyn Theater in Beverly Hills.

Attendees will include Oscar nominees Janet Perlman, Caroline Leaf, Wendy Tilby, and Amanda Forbis (right, with Tilby), in addition to Academy Award winner Torill Kove. The animators will introduce their short films, and will then take part in a panel discussion moderated by animation critic Charles Solomon.

As per the Academy’s press release, “’Canadian Women in Animation’ will explore the unique and personal visual styles of the five Academy Award-nominated filmmakers, who all work in Canada. The evening will illuminate not only each individual’s approach to animation, but also the collective contributions that the National Film Board of Canada – and particularly its women animators – have made to the art form.”

The panelists’ Oscar-nominated and -winning films to be screened are (film descriptions are from the press release):

The Tender Tale of Cinderella Penguin (1981, above), produced and directed by Perlman, is a fresh look at a centuries-old tale, using a medieval style of illustration to animate the story of Cinderella Penguin, who loses her magic flipper. The film was produced using traditional cel animation.

The Street (1976), directed by Leaf, offers an interpretation of a short story by Mordecai Richler about a family dealing with an old and infirm relative. The film was produced using tempera mixed with oil on glass.

When the Day Breaks (1999), directed by Tilby and Forbis, tells the bittersweet tale of Ruby the pig, whose life takes an unexpected turn after she witnesses the accidental death of a stranger. The exquisitely crafted four-year labor of love uses pencil and paint on photocopies, giving the film a textured look reminiscent of a flickering newsreel.

The Danish Poet (2006), directed by Kove, won the Academy Award for Animated Short Film. The film follows Kasper, a poet who goes on holiday to Norway to meet the famous writer Sigrid Undset. “The Danish Poet” was created from pencil drawings that were digitally scanned and colored, and features backgrounds enhanced with oil-painted skies by Montreal artist Anne Ashton.

Tickets for “Canadian Women in Animation” are $5 for the general public and $3 for Academy members and students with a valid ID. Tickets may be purchased online at www.oscars.org, by mail, or in person at the Academy box office during regular business hours.