Among the other new signatories of the petition organized by France’s Société des Auteurs et Compositeurs Dramatiques (SACD) are:

Harvey Weinstein has announced that he wants to get a petition started on this side of the Atlantic as well. “The problem is to do with the legal situation in the state,” Weinstein wrote in The Independent. “They are doing this because they want a circus, to make their toughness overt – and that is where I draw the line. This is the government of the United States not giving its word and recanting on a deal, and it is the government acting irresponsibly and criminally.” (Remarks that Hollywood is standing firmly behind Polanski, however, are at best exaggerated. Thus far, there are relatively few names from the US film industry in the highly international SACD list.)

In France, the government has taken a more moderate tone following protests from various political parties.

Green Member of the European Parliament Daniel Cohn-Bendit has remarked that French Minister of Culture Frédéric Mitterrand, who fiercely condemned Polanski’s arrest, should have waited to make his statements until more details about the case were known. Meanwhile, right-wing extremist Jean-Marie Le Pen, like numerous members of the public and media commentators of assorted political persuasions, has railed against a “political-artistic caste” that demands special privileges.

Samantha Geimer (right), who as a teenager (then known as Gailey) was allegedly drugged and sexually assaulted by Polanski, has been silent on the matter. The Hawaii-resident’s attorney has declared that Geimer will keep her peace until the Swiss authorities decide if they’ll extradite Polanski to the United States, where he’s wanted on a charge of having sex with a minor.

“Every time this case is brought to the attention of the court, great focus is made of me, my family, my mother and others,” Geimer wrote a while back in her affidavit to a Los Angeles court requesting that the case against Polanski be dropped. “That attention is not pleasant to experience and is not worth maintaining over some irrelevant legal nicety, the continuation of the case.”

“True as they may be, the continued publication of those details cause harm to me,” she wrote in January following the publication of her trial transcripts by the Los Angeles D.A.’s office. “I have become a victim of the actions of the district attorney.” Geimer has also lashed out against the judge who handled the Polanski case in the late ’70s, accusing him of being concerned solely with his public image instead of either the victim’s well being or the rule of law.

(The prosecutor in Polanski’s original case now claims he lied about the judge’s unethical behavior in the documentary Roman Polanski: Wanted and Desired. The prosecutor doesn’t explain the reason for the lie, except that he believed the film “would never been [sic] shown in the United States” and he “thought it made a better story if I said I’d told the judge what to do.”)

As per a Guardian report, Debra Tate, sister of Polanski’s murdered wife Sharon Tate, said on American television, “There’s rape and then there’s rape. It was determined that Roman did not forcibly have sex with this woman [Geimer was then 13 years old]. It was a consensual matter,” adding that discussions with Los Angeles prosecutors have led her to believe Polanski would not get a fair trial in the United States.

“I do believe that our system is extremely broken on [multiple] levels,” she said, declaring that “I think that this matter better be served in France.” Polanski is a French national of Polish parentage. 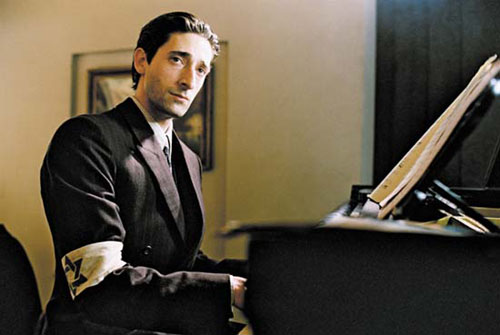 In 2003, when Polanski was up for a best director Oscar for The Pianist (above, with Adrien Brody) – which he eventually won – Samantha Geimer publicly stated that he should be able to attend the Academy Awards ceremony, writing an opinion piece for the Los Angeles Times in which she asked people to “judge the movie, not the man.”

“We pressed charges, and he pleaded guilty,” Geimer explains in the Times piece. “A plea bargain was agreed to by his lawyer, my lawyer and the district attorney, and it was approved by the judge. But to our amazement, at the last minute the judge went back on his word and refused to honor the deal.

“Worried that he was going to have to spend 50 years in prison – rather than just time already served – Mr. Polanski fled the country. He’s never been back, and I haven’t seen him or spoken to him since.

“Looking back, there can be no question that he did something awful. It was a terrible thing to do to a young girl. But it was also 25 years ago – 26 years next month. And, honestly, the publicity surrounding it was so traumatic that what he did to me seemed to pale in comparison.”

Some have now taken to accusing Geimer, who received an undisclosed settlement from the filmmaker, of having been bought out by Polanski.

Also: In the French publication Le Temps, journalist Luc Debraine compares the outrage over l’affaire Polanski with a similar storm that forced Charles Chaplin to leave the United States more than half a century ago. In Chaplin’s case, in addition to accusations of pedophilia – one of his wives, Lita Grey, became pregnant at the age of 16 – the filmmaker was hounded by nationalists and right-wingers because of his left-leaning politics. He returned to the United States in 1972 to receive an Honorary Academy Award.

Show that you REALLY CARE about children, not just when sex is involved. Children are abused every day in other ways. Do you give a damn??

If you’re not just a bunch of hypocrites, then sign this petition of the United Nations Convention on the Rights of the Child. The US and Somalia are the only two countries in the world that haven’t signed it yet!!

Hey Jamie,
read the testimony. Not consensual. Moreover, she was 13. Manson has exactly nothing to do with this. Polanski is a fugitive. And you know exactly nothing about this, obviously.

I guess the LA District attorney have nothing else to do but to gain publicity with the media circus. Gosh, this thing happened over 30 years ago, a consensual sex act which at today’s society’s sex standard is no big news. It will just cost money which could be use for other things on this depress economy.
You have the Manson’s family who murdered all those people of which one of them is Polanski’s wife (Sharon Tate) and the State is still costing money on these murderers who are in jail.

The victim has served a sentence of 30 years of post traumatic stress disorder. It’s time for the child’s rapist to serve his time as well.