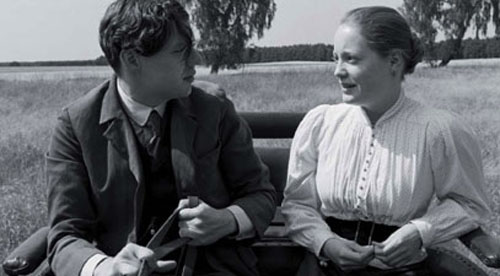 The White Ribbon by Michael Haneke.

Six films are vying for the top prize at the 2009 European Film Awards. They are:

With six nods, A Prophet leads the race, followed by Slumdog Millionaire with five nominations (including one shared with Antichrist) and The White Ribbon with four.

Curiously, every single one of the best European picture nominees has already won awards elsewhere: The White Ribbon won the Palme d’Or, A Prophet the Grand Jury Prize, and Fish Tank tied for the Special Jury Prize at Cannes; Slumdog Millionaire was this year’s best picture Academy Award winner, while The Reader earned Kate Winslet a best actress Oscar; and Let the Right One In won best direction and best screenplay (John Ajvide Lindqvist) honors at Sweden’s Golden Beetle Awards, in addition to numerous best foreign language film accolades from US critics’ groups.

Among the directors of the six best picture nominees only four were shortlisted in their own category: Jacques Audiard, Danny Boyle, Michael Haneke, and Andrea Arnold. Stephen Daldry and Tomas Alfredson were replaced by Pedro Almodóvar for the film-noir homage Broken Embraces and Lars von Trier for the family-hell drama Antichrist (above).

Joining Tahar Rahim and Dev Patel in the best actor race are Moritz Bleibtreu for his 1970s terrorist in Uli Edel’s The Baader Meinhof Complex; David Kross, as the teenager who has an affair with sympathetic ex-Nazi Kate Winslet in The Reader; Filippo Timi (above, with Giovanna Mezzogiorno), as both Fascist dictator Benito Mussolini and his secret son Benito Albinoin Marco Bellocchio’s Vincere; and Steve Evets as a postman helped by soccer star-turned-fairy-godfather Eric Cantona in Ken Loach’s Looking for Eric.

(It really wouldn’t be a bad idea if the European Film Academy instituted best supporting actor/actress categories as well. Performers in non-leading roles would then have a chance of getting their work recognized.)

Oscar winner Simon Beaufoy is up for the best screenplay award for Slumdog Millionaire, and so are Jacques Audiard and Thomas Bidegain for A Prophet, Michael Haneke for The White Ribbon, and actor-filmmaker Gianni di Gregorio for Mid-August Lunch (above).

It should be noted that only A Prophet, The White Ribbon, and Slumdog Millionaire managed to earn nods in the best picture, best director, and best screenplay categories.

Other nominees include Oscar-winning cinematographer Anthony Dod Mantle for both Slumdog Millionaire and Antichrist; composers Alexandre Desplat and Alberto Iglesias for, respectively, Coco Before Chanel (above, with Alessandro Nivola and Audrey Tautou) and Broken Embraces; and editor Francesca Calvelli (in the general “technical” category Prix d’Excellence) for Vincere.

The nominees in the animation, documentary, and first feature categories were announced in the last several weeks. In fact, the documentary winner has already been named: Peter Liechti’s Swiss-made The Sound of Insects: Record of a Mummy.

Other confirmed award winners are Isabelle Huppert, recipient of the European Achievement in World Cinema Award, and Ken Loach, who’ll be given the European Film Academy’s Lifetime Achievement Award.

Among the eligible films and performers that failed to nab a mention were Giovanna Mezzogiorno for Vincere, Audrey Tautou for Coco Before Chanel, Maren Ade’s Everyone Else, Ulrich Tukur for The White Ribbon, Martina Gedeck for The Baader Meinhof Complex, and Michael Fassbender for Fish Tank.

Now, the curious thing about the European Film Awards is that the awards’ timing and eligibility rules (some of which have varied throughout the years) make many of the nominations seem like old news. Indeed, as per current European Film Academy rules, in order to be eligible for the awards a motion picture must have had “their first official screening” after July 1 of the previous year (the submission deadline in 2009 was June 15) – whereas in Hollywood a movie can be released in Los Angeles on Dec. 31 and be in the running for the Oscars a mere five or six weeks later.

Apart from film festivals, which take place throughout the year, film awards season around the world generally begins in mid-October and continues all the way into mid-April or whereabouts. Although the European Film Awards have been a relatively important part of the awards hoopla for more than two decades, their relevance could be considerably enhanced if they better represented the European film output in each given year.

For instance, three of the best European film nominees – Slumdog Millionaire, The Reader, and Let the Right One In – have already had their national and/or international awards season runs, and so have three other nominees in the top categories, Séraphine (above), Mid-August Lunch, and The Baader Meinhof Complex. Having so many “old” films show up in the European Film Awards roster makes the awards themselves look more than a little outdated. Even if, say, a popular hit like Slumdog Millionaire ends up taking home a bevy of trophies, that’ll feel anticlimactic as the film’s “awards momentum” ended when it won the best picture Oscar about eight months ago.

Like the Golden Globes and the BAFTAs, the European Film Awards would undoubtedly increase their clout if the European Academy pushed their awards ceremony into late January or even February so as to include all eligible films released in a calendar year – of course, as long as its winners are announced before the Academy Awards ceremony. That way, many more among the nominated films would gain awards momentum – and all the extra publicity attached to it – especially English-language productions released later in the year so as to boost their Oscar chances.

It also wouldn’t hurt if non-European talent working on European productions – in case one must stick to regionally made films – were eligible for the nominations as well. I mean, imagine if the Hollywood Academy had a long-standing rule stipulating that only Americans working on US-made productions could qualify for its awards. Had that been the case, perhaps half (or more) of the nominees and winners of the past 81 years – most among those European-born talent, from Emil Jannings and Greta Garbo to Kate Winslet and Danny Boyle – would have been deemed ineligible.

The winners of the 2009 European Film Awards will be announced in Bochum, Germany, on Dec. 12. German comedy performer Anke Engelke will host the event.

Scheduled presenters at the 2009 European Film Awards, to be held later this evening in Bochum, Germany, are: 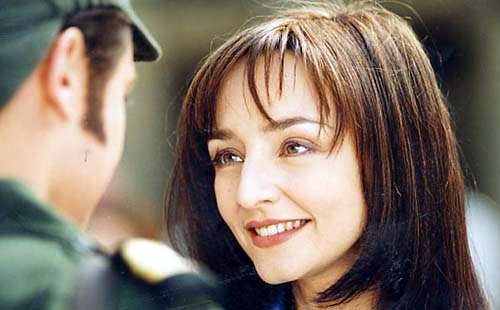 From the European Film Academy’s press release, the EFA Ambassadors are:

Moritz Bleibtreu, actor, Germany
One of the best-known German faces in international cinema, Moritz Bleibtreu first shot to international attention as Manni in Tom Tykwer’s RUN LOLA RUN (1998). He was nominated in 2001 for the EFA People’s Choice Award for THE EXPERIMENT by Oliver Hirschbiegel and is now nominated for European Actor for his role as Andreas Baader in THE BAADER MEINHOF COMPLEX by Uli Edel.

Mads Mikkelsen, actor, Denmark
Be it as a nominee (2006 for AFTER THE WEDDING by Susanne Bier, 2008 for FLAME AND CITRON by Ole Christian Madsen) or as a presenter (2007 in Berlin, 2008 in Copenhagen), the Danish star (known from Nicolas Winding Refn’s PUSHER films, THE GREEN BUTCHERS by Anders Thomas Jensen, and the James Bond film CASINO ROYALE) very much enjoys the company of his European fellows every time he is attending the European Film Awards.

Cristian Mungiu, director, Romania
After several short films and the feature OCCIDENT, Cristian Mungiu was the great Romanian discovery for the international audience when his film 4 MONTHS, 3 WEEKS & 2 DAYS won the Palme d’Or in Cannes two years ago and the award for European Film 2007 at the European Film Awards.

Kim Rossi Stuart, actor, Italy
Having started his acting career at the age of five, among Kim Rossi Stuart’s latest works have been Gianni Amelio’s THE KEYS TO THE HOUSE, Michele Placido’s CRIME NOVEL, and now Francesca Archibughi’s A MATTER OF HEART. In 2006 he wrote, directed and acted in the film ALONG THE RIDGE.

Belén Rueda, actress, Spain
The Spanish actress received her first Goya for her role as Julia in THE SEA INSIDE by Alejandro Amenábar and has been a friend of the European Film Academy since her nomination for THE ORPHANAGE by Juan Antonio Bayona last year. With Spain, she represents a country where the Academy experiences great enthusiasm and interest in the European Film Awards.

Johanna ter Steege, actress, the Netherlands
After her dream debut in THE VANISHING, for which she was awarded in the very first European Film Awards in 1988, Johanna ter Steege prospered in films by internationally renowned directors such as Robert Altman and István Szabo. Among her many films are J’ENTEND PLUS LA GUITARE by Philippe Garrel, SWEET EMMA, DEAR BÖBE by István Szabo, PARADISE ROAD by Bruce Beresford, and Dutch titles like GUERNSEY by Nanouk Leopold and AU REVOIR by Heddy Honigmann. The Dutch actress Johanna ter Steege has been a very faithful ally of the European Film Academy since its beginnings.

Maciej Stuhr, actor, Poland
The popular Polish actor and comedian Maciej Stuhr has had roles in films by renowned directors such as Andrzej Wajda, Krzysztof Kie?lowski, Agnieszka Holland and Krzysztof Warlikowski to name but a few, and among his latest films are titles like THE WEDDING and 33 SCENES FROM LIFE. Together with French actress Sophie Marceau, he hosted the 2006 European Film Awards Ceremony in Warsaw and has been a much-appreciated guest at the European Film Awards ever since.

Danis Tanovic, director/screenwriter, Bosnia & Herzegovina
His film NO MAN’S LAND won the European Film Awards 2001 (Screenwriter) and a total of 42 awards, and brought the absurd reality of war to the conscience of people across Europe and the world. He went on to make L’ENFER, based on the script by Krzysztof Kie?lowski and Krzysztof Piesiewicz, and, most recently, TRIAGE, starring Colin Farrell, Paz Vega and Christopher Lee.

EFA Ambassadors Moritz Bleibtreu, Stephen Daldry, Johanna ter Steege, and Maciej Stuhr will be among those present at the 2009 European Film Awards ceremony on 12 December in Bochum, Germany, which will serve as the international launching pad for the European Capital of Culture RUHR.2010 “Essen for the Ruhr.”