At around the time Kisses for My President was released, Bergen, along with Gregory Peck, James Garner, and other Hollywood personalities, publicly came out against California’s Proposition 14, a 1964 ballot initiative that would have nullified the Rumford Fair Housing Act, thus paving the way for the return of racial discrimination in the state’s real estate market.

In the early ’70s, Bergen would contribute $2,800 to Democratic presidential candidate George McGovern’s campaign. McGovern, however, lost to his Republican opponent Richard Nixon.

Undaunted, Polly Bergen remained a vocal supporter of several causes reviled by right-wingers, among them the Equal Rights Amendment. “I’m a Southern Baptist from Bluegrass [Knoxville area], Tennessee, and the ERA makes sense to me,” she told United Press International in 1980.

She was equally supportive of women’s reproductive rights. As reported in the Los Angeles Times, when she was 17 she underwent an illegal abortion that, Bergen asserted, left her unable to ever bear children again. (She and Freddie Fields had two adopted children.)

Back to her show business career: Polly Bergen made her Broadway debut in the 1953 revue John Murray Anderson’s Almanac, also featuring, among others, Harry Belafonte, Hermione Gingold, Orson Bean, Kay Medford, and Tina Louise. Bergen’s solo number was “I Dare to Dream.” According to online sources, working on Almanac put such a strain on her vocal cords that she had to undergo a throat operation.

By 1955, she was feeling well enough to record the album “Little Girl Blue,” featuring standards such as “Autumn Leaves,” “The Way You Look Tonight,” and the title song.

Polly Bergen music albums from that period, for the Jubilee and Columbia labels, included the smash hit “Bergen Sings Morgan,” released at the time “The Helen Morgan Story” was broadcast; “The Party’s Over”; “My Heart Sings”; and, with fellow Broadway players Farley Granger and Hermione Gingold, “First Impressions,” from the 1959 musical of the same name, based on Jane Austen’s Pride and Prejudice. Bergen’s last album, “Act One, Sing Too,” came out in 1963.

By the late ’60s, her heavy smoking had taken its toll on her vocal cords. “I had a choice of quitting smoking or singing another chorus of ‘Night and Day,’ and I chose to continue smoking and quit singing,” she told CBS News’ Charles Osgood in 2001. “And it was a decision that I regretted from that day forward.”

At that time, she also told the New York Times’ James Gavin, “I loved smoking. The thing that made me stop was not the realization that I would die, but that I would live and be incapacitated.” 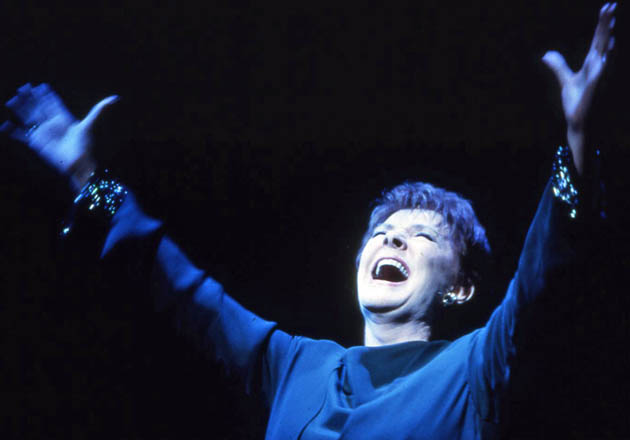 Damaged vocal cords or no, also in 2001 a huskier-voiced, 70-year-old Polly Bergen was back on Broadway in a revival of Stephen Sondheim and James Goldman’s hit musical Follies at the Belasco Theater. After reportedly having been refused an audition, she contacted Sondheim directly, ultimately getting hired for a key role.

“This is the first show I have ever auditioned for,” she recalled telling Sondheim and Follies casting director Jim Carnaham. “When I was young, they just gave me the lead. And when I got old, they wouldn’t see me at all.”

As has-been Hollywood star Carlotta Campion – played by Yvonne De Carlo in the original 1971 production – Bergen sang the show-stopper “I’m Still Here.” Theater critic and historian John Kenrick was impressed, writing that “Polly Bergen stops everything cold with ‘I’m Still Here,’ bringing a rare degree of introspection to a song that is too often a mere belt-fest.”

In Sondheim’s view, Bergen treated the song as if it were entirely “about her own life, not just about a star.” She earned a Tony nomination for Best Featured Actress in a Musical, but lost the award to Cady Huffman for The Producers.

In 2002, Polly Bergen briefly replaced Carole Shelley in the role of Fraulein Schneider, the apartment owner who becomes involved with a Jewish shop owner as the Nazis come to power, in a revival of Cabaret starring Molly Ringwald.

The following year, she was back on Broadway, playing opposite Star Wars’ Mark Hamill in Richard Alfieri’s comedy Six Dance Lessons in Six Weeks. Additionally, Bergen had successful nightclub runs in New York City (“I know what you’re thinking. You thought I was dead, right?”) and Beverly Hills.[1]

Also in 2003, health issues eventually forced her to withdraw from the Connecticut-based Goodspeed Musical’s production of Nan Knighton and Frank Wildhorn’s Camille Claudel, starring Linda Eder in the title role and Michael Nouri as Auguste Rodin. Bergen was replaced by Joan Copeland. 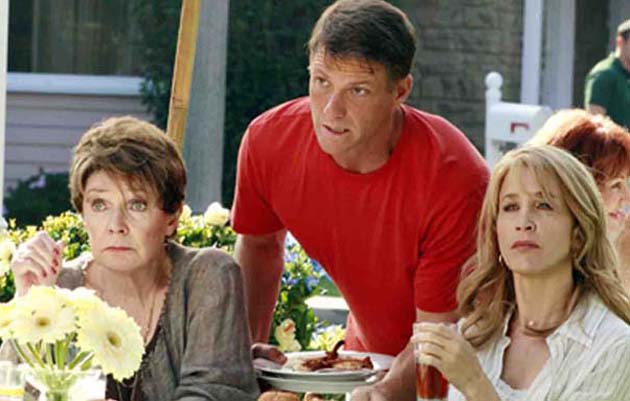 Polly Bergen began her lengthy – and to some extent prestigious – television career in 1950.

“Overnight, [‘The Helen Morgan Story’] made me a star,” she told the Hartford Courant‘s Susan Dunne in 2013. “It was one of those magical things you read about but don’t really believe actually ever happens, but it does and it did. … I was only cast because they couldn’t find anybody else to do it. I was the last person on Earth they wanted to do that part.”

‘The Winds of War,’ ‘Desperate Housewives’

In the ensuing five decades, Polly Bergen would be nominated for three other Emmy Awards:

‘To Tell the Truth’ and ‘The Polly Bergen Show’

Besides the aforementioned titles, Polly Bergen’s best-known television appearances included those on the following:

In the ’70s, Bergen was seen in two all-star, at times surprisingly entertaining, TV movies:

Polly Bergen remained busy on TV, whether in supporting roles, as a game-show panelist, or as a guest star – e.g., in Touched by an Angel, Twice in a Lifetime, The Sopranos – all the way to the 2011 Desperate Housewives episode “Flashback,” in which Larry Hagman played her love interest.

In 1994, she wrote the story (adapted by Betty Goldberg), was featured in, and acted as executive producer of the TV movie Leave of Absence, about a married man (Brian Dennehy) who leaves his wife (Blythe Danner) to care for his mistress (Jacqueline Bisset), suffering from terminal cancer.

And four decades after Kisses for My President, Bergen had a recurring role in Rod Lurie’s series Commander in Chief (2005–2006). She played Kate Allen, mother of Mackenzie Allen (Geena Davis), the first woman president of the United States. 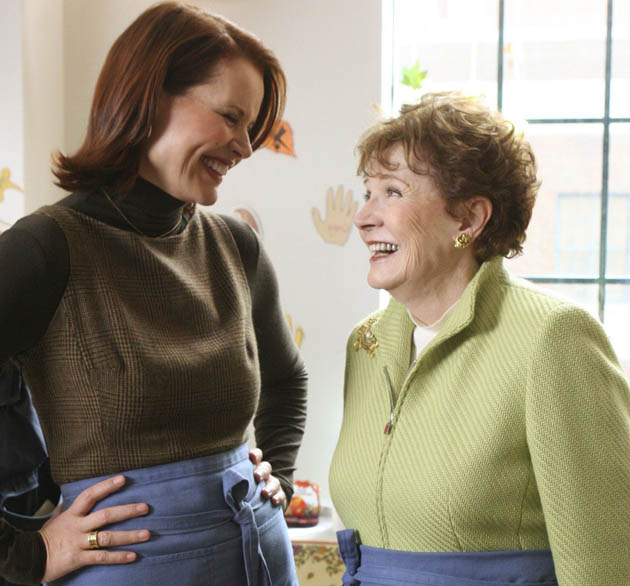 ‘Commander in Chief’ with Geena Davis and Polly Bergen.

In 1962, the year she made her big-screen comeback in Cape Fear, Polly Bergen published the first of her three self-help books, The Polly Bergen Book of Beauty, Fashion and Charm. Four years later, she founded her own cosmetics venture, The Polly Bergen Company, which went from a small home business to a $6 million enterprise. “It was very difficult at the beginning,” she would recall decades later, “because everybody considered me just another bubble-headed actress.” In 1973, the company, which boasted the “Oil of the Turtle” brand, was sold to Fabergé.

Nakedness in broad daylight (if you’re not in bed with a lover) can be tough. I know. For years I couldn’t bring myself to look at my own naked body. My Southern Baptist upbringing was definitely Victorian about the human body, and nudity was not acceptable. Four years ago, things changed. …

Her second marriage (1956) was to producer and super-agent Freddie Fields (“the love of my life”), who had been previously married to 1930s child actress Edith Fellows (Pennies from Heaven, Little Miss Roughneck), and for whom the Southern Baptist Bergen reportedly converted to Judaism.[3]

Among Fields’ movie credits as a producer/executive producer are Looking for Mr. Goodbar (1977), Crimes of the Heart (1986), and Glory (1989), while his extensive list of clients included, at some time or other, the following:

Besides, Fields was one of the people credited for the resurgence of Judy Garland in the 1960s.

Polly Bergen and Freddie Fields were divorced in 1975. He died of lung cancer in Dec. 2007.

Entrepreneur and attorney Jeff Endervelt was Polly Bergen’s husband no. 3 (1982). In the 2013 Hartford Courant interview, Jan McCormack recalled that at Bergen’s wedding ceremony she answered the usual “I do,” followed by “Oh, fuck.” The latter phrase may have been a premonition of what was to come.

According to The Guardian, while married to Endervelt “she co-signed his loans and gave him millions to invest from her beauty company profits.” In 2001, Bergen explained to the New York Times: “He would come home and say, ‘Honey, sign this.’ I wouldn’t even look at it. Because you trust your husband.”

In 1987, during the Ronald Reagan presidency, the stock market collapsed, wiping out the couple’s investments. They were divorced three years later.

Endervelt “vanished,” leaving Bergen so heavily in debt – the couple were sued by New York City’s National Bank – that in order to avoid bankruptcy she was forced to sell her Park Avenue apartment and other belongings. She moved in with the Los Angeles-based Jan McCormack, who found her a number of TV gigs, and later settled in Montana for several years.

Auditioning for some 12-year-old idiot

“I just couldn’t bear the humiliation of what I was doing,” she told the New York Times. “I just can’t stand in these lines with 35 actresses who’ve each got 63 million miles of film, waiting to audition for some idiot who’s 12 years old, who wants to know what all of us have done. Of course, as soon as I moved to Montana, I got four or five television movies in a row, because the minute you’re not there they think you’re not needy, so they want you.”

That took place about a decade before her triumphant return to Broadway in Follies, in which she got to sing, “Lord knows, at least I was there, and I’m here. Look who’s here, I’m still here.”

She was indeed still here in early 2014, when gossip columnist Liz Smith reported that the Cape Fear leading lady was working on a tell-all autobiography to be titled Welcome to Pollywood.

As per Smith, the Bergen autobio would feature “everyone from Bugsy Siegel to Barbra Streisand to Ardeshir Zahedi to Elizabeth Taylor and Harry Belafonte,” in addition to stories “from Polly’s taking LSD with Cary Grant to playing Chris Colfer’s (Glee) grandma in 2012’s Struck By Lightning.” It’s unclear how far along the book was at the time of Bergen’s death.

The secret of her longevity

… I think there are a lot of people who start out and become stars and then they demand to stay stars, and nobody can stay a star. It just doesn’t work. I have a poster in the other room of a movie that I did in which I had the lead with Robert Stack and Joan Crawford has a cameo. Joan Crawford has a cameo! She wanted to keep working. She didn’t need the money. A lot of people won’t do that. They won’t go there. And so they disappear. … You couldn’t suddenly play a character part if you used to be the lead, because people would say ‘what happened to her career?’ I never really worried about that.

There are plenty of online rumors and stories about Polly Bergen coming out as a lesbian in her 70s. However, I could find no confirmation from any reliable sources. And nothing from Bergen herself.

[1] Gena Rowlands plays Bergen’s role in the film version of Six Dance Lessons in Six Weeks, directed by Arthur Allan Seidelman, and co-starring Cheyenne Jackson. Earlier this year, Leslie Caron took on the part in a Southern California revival at the Laguna Playhouse.

[3] In case Polly Bergen truly did convert to Judaism following her marriage to Freddie Fields, it’s unclear whether she remained Jewish after she and Fields parted ways. See her 1980 ERA-related quote “I’m a Southern Baptist from Bluegrass, Tennessee, …” found elsewhere in this post.

The Best Years of Our Lives 1946: Teresa Wright Career Highlight