The best actress winner was Lola Dueñas for her role as a heavy-drinking, emotionally and sexually frustrated woman who develops a relationship with a man with Down’s Syndrome (Pablo Pineda) in Me, Too. Penélope Cruz, Dueñas’ co-star in Pedro Almodóvar’s Volver, was also in the running for Broken Embraces, but the film won only one statuette: for Alberto Iglesias’ score. Cruz, however, received quite a bit of attention for being seen sitting next to Javier Bardem, reportedly their first “official” appearance together at a film event.

Bardem wasn’t in the running for anything, but his brother Carlos Bardem was a best supporting actor nominee for Cell 211. He lost to Raúl Arévalo in Gordos.

Pedro Almodóvar, for his part, received the evening’s longest ovation, as the audience at the Palacio de Exposiciones y Congresos de Ifema got on their feet to welcome the most renowned Spanish-born filmmaker since either Carlos Saura or Luis Buñuel – take your pick – and the Spanish Academy’s pariah. Almodóvar had quit the Academy after Bad Education was snubbed in early 2005, but seemed to have made peace with it following the Volver victory two years later.

Almodóvar was the surprise Best Film presenter. (Broken Embraces wasn’t in the running in that category). “I’m here because you have a very persistent president,” Almodóvar said referring to fellow filmmaker Alex de la Iglesia. “He pestered me until two days ago. And I had a lot of excuses, but he wouldn’t take no for an answer.” Almodóvar went on to explain he felt it would have been awkward if he were waiting in the wings and his Broken Embraces screenplay was announced the winner. But de la Iglesia put his fears to rest by assuring him he would not win.

Juan José Campanella’s Spanish-Argentinean co-production The Secret in Their Eyes won the Goya for best Hispano-American film. The political-crime drama is also in the running for the best foreign language film Oscar. The Best European Film was Danny Boyle’s Slumdog Millionaire.

The previous Goya telecast record holder was the 2005 ceremony, when 3.72 million people watched the show. That year, Pedro Almodóvar’s Bad Education lost most of the top awards to Alejandro Amenábar’s The Sea Inside. Amenábar was also in the running this year for the historical drama Agora, but the film’s seven wins were mostly in the technical categories. Almodóvar’s Broken Embraces was in the running as well, but won only one Goya, for Alberto Iglesias’ score.

It’s unclear why this year’s ceremony led to such a major upsurge in interest, though the fact that Agora was Spain’s biggest domestic hit in 2009 and Cell 211 was #3 surely didn’t hurt. Also definitely not hurting was the presence of Penélope Cruz and Javier Bardem together at a film function for – reportedly – the first time. Cruz was also in the running for Broken Embraces, but she lost the Best Actress Goya to her former Volver co-star Lola Dueñas for Me Too.

“I’m here because you have a very persistent president – very persistent,” surprise presenter Almodóvar (please scroll down), who quit the Spanish Academy in 2005, said referring to fellow filmmaker Alex de la Iglesia (wearing glasses and laughing in the clip above). “He pestered me until two days ago. … And I had a lot of excuses, but he wouldn’t take no for an answer.” Almodóvar went on to explain he felt it would have been awkward if he were waiting in the wings and his Broken Embraces screenplay was announced the winner. But de la Iglesia put his fears to rest by assuring him, “Pedro, you’re not going to win.”

Unfortunately, my Spanish isn’t the greatest. And Almodóvar makes James Cagney sound like a slow talker. Audience members, facing no such language hurdles, were clearly enjoying themselves. Something else I did get: Almodóvar explains that de la Iglesia finally convinced him to present the Goya for Best Film by saying, “You don’t like this ceremony, but in about three weeks you’ll be in Hollywood presenting the best foreign language film Oscar.” Almodóvar didn’t know how to respond to that. “And so, here I am.” And the 2010 Goyas were all the better for it. 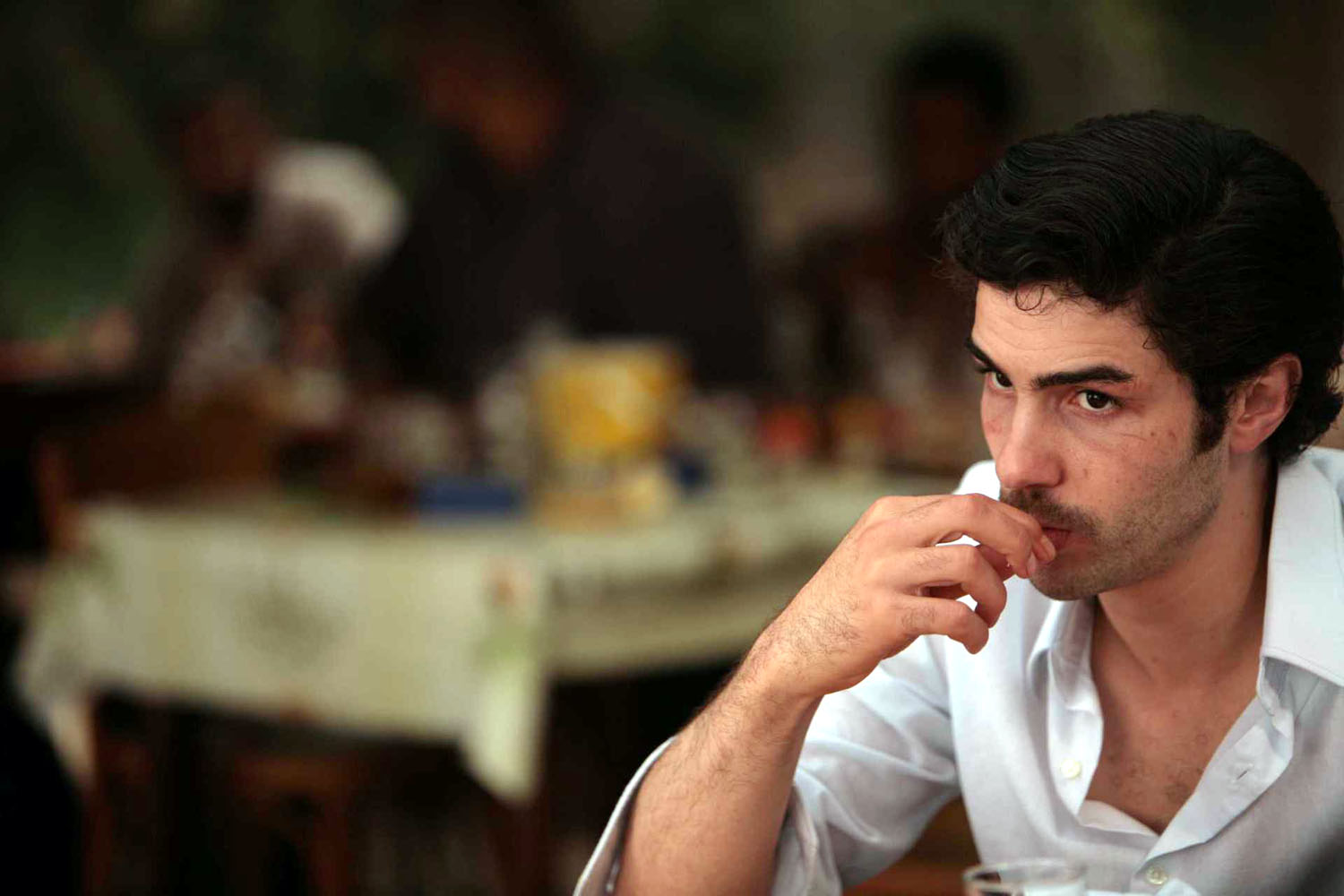 Avatar may be the world’s box office ruler, but it surely wasn’t ruler of anything at the London Film Critics’ Circle Awards held this evening in, where else, London.

The London Critics’ best film of 2009? Jacques Audiard’s prison drama A Prophet, the first French-made production to win the Circle’s top award in its 30-year history. Starring 2009 European Film Award winner Tahar Rahim, A Prophet is set in a tough French prison where a newcomer must fend off the advances of the local Corsican mafia. A Prophet has received 13 nominations for the 2010 French Academy’s Césars and is expected to win the Best Film award.

London Critics’ Chairman and Observer writer Jason Solomons called the vote “a victory for world cinema and shows a refreshing open-mindedness to judge all film [sic] on an equal footing, from giant Hollywood blockbusters to classy European prison movies,” adding that critics were fed up with “the ghettoisation of films at awards ceremonies.”

Solomons concluded by saying that “the overwhelming feeling was that this year, the energy, daring, skill and drama of the best European film-makers should be recognised at the highest level possible. For those who love film, the only real language is that of cinema itself and, in A Prophet, director Jacques Audiard articulates it beautifully.”

Avatar, nominated for Film of the Year and Director of the Year (James Cameron), didn’t win anything.

Accepting his Film of the Year award in French, a teary Audiard told the audience: “I’m going to call up James Cameron at 4 o’ clock in the morning and when he picks up the phone he’s going to hear my devilish voice saying ‘Loser! Loser!'”

“The win,” wrote Mark Brown in The Guardian, “will be welcomed by those who argue that it has been a far from vintage year for English language films, while the three head-and-shoulders best films of the past year have arguably been A Prophet, Michael Haneke’s The White Ribbon and Tomas Alfredson’s Let the Right One In.”

Curiously, even though A Prophet was also in the running in the London Film Critics’ Foreign Language Film of the Year category, it lost to Tomas Alfredson’s vampire drama Let the One Right In, which received a whole array of US critics’ awards early last year. (The film opened in the US in 2008.)

Needless to say, the Arnold-Bigelow double whammy was also a London Critics’ first, though two other women had previously won the British Director of the Year award, Gurinder Chadha for What’s Cooking in 2001 and Lynne Ramsay for Ratcatcher in 1999. (Andrea Arnold is currently working on a new adaptation of Emily Brontë’s Wuthering Heights. That should be interesting.)

The two performers expected to win this year’s Oscar in the supporting categories, Christoph Waltz and Mo’Nique, were voted Actor and Actress of the Year for, respectively, Quentin Tarantino’s Inglourious Basterds and Lee Daniels’ Precious.

Relative newcomer Carey Mulligan (above) and veteran Colin Firth were the British Actor and Actress of the Year for, respectively, Lone Scherfig’s An Education and Tom Ford’s A Single Man. Both have been nominated for Oscars, though neither is expected to win. Anne Marie Duff, playing John Lennon’s mother in Nowhere Boy, was the British Supporting Actress of the Year.

Quentin Tarantino was present to receive a special career achievement award. “Hands down – this is the middle of my career,” Tarantino told the crowd. “I like the idea of giving the award to someone where you think their best work might still be in front of them as an encouragement.”

Other London Critics’ winners were Jesse Armstrong, Simon Blackwell, Armando Iannucci and Tony Roche for the political satire In the Loop and Duncan Jones as Breakthrough British Filmmaker for the sci-fi thriller Moon.

THE ATTENBOROUGH AWARD: BRITISH FILM OF THE YEAR
Bright Star
An Education
* Fish Tank
In the Loop
Moon

THE NSPCC AWARD: YOUNG BRITISH PERFORMER OF THE YEAR
* Katie Jarvis – Fish Tank
Aaron Johnson – Nowhere Boy and Dummy
George MacKay – The Boys Are Back
Bill Milner – Is Anybody There? and Sex & Drugs & Rock & Roll
Saoirse Ronan * – The Lovely Bones

* Irish actors / filmmakers are eligible in all British categories (Michael Fassbender was born in Germany to a Northern Irish mother).

Oscar Best Songs Nominees Not to Be Performed at Ceremony

Marion Cotillard won’t sing Maury Yeston’s “Take It All” fromNine, Jeff Bridges won’t perform Ryan Bingham and T Bone Burnett’s “The Weary Kind” from Crazy Heart, Randy Newman won’t do a rendition of “Almost There” and “Down in New Orleans” from The Princess and the Frog, and Reinhardt Wagner and Frank Thomas won’t stage “Loin de Paname” from Paris 36 at the 2010 Academy Awards ceremony next March 7.

Why not? Simply because this year’s Best Original Song nominees will be presented via clips from the films in which they are sung, “which is how most nominated achievements are featured within the show,” Academy of Motion Picture Arts and Sciences spokeswoman Leslie Unger explained Wednesday.

Why this year? Well, since the Academy must have each Best Picture nominee introduced individually throughout the show – and since there are now ten Best Picture nominees – something apparently had to go. Mindnumbingly boring speeches will surely remain and so will unfunny jokes and repartees. As show co-producer and choreographer Adam Shankman has announced, musical numbers will be part of the Oscar ceremony as well (whether or not they’re related to the nominated films is anyone’s guess). But the nominated songs have been kicked off the stage.

Utterly ridiculous! We know studios would love to get rid of actors and just move to animation; they’ve already run off all the best writers. Now they’re suggesting that the best songs should not be sung by those who brought the songs to notice? Who’s next — the composers, for the scores of movies? All to get people to watch someone walk up to the microphone, read someone’s name, and go away? The songs were part of the entertainment of the evening. I am truly disgusted by this one.

Some of those musical numbers are really bad. Im kinda glad they’re gone.