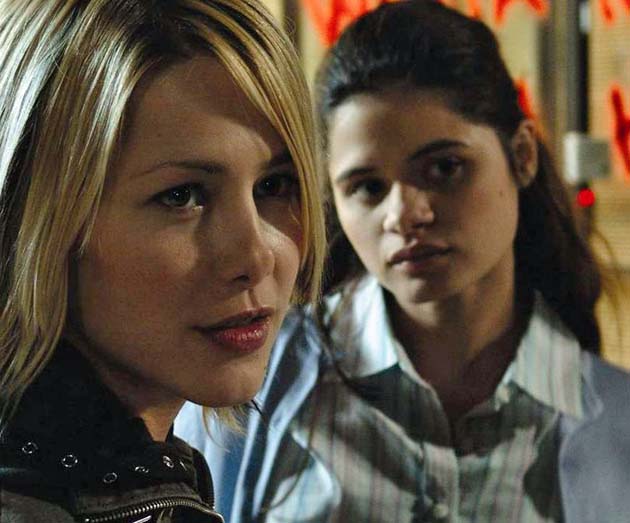 The winners at the 2007 SXSW Film Festival, held in Austin, Texas, were announced on March 14. Jamie Babbit’s Itty Bitty Titty Committee, about a young woman who becomes involved in the radical lesbian group CIA (Clits in Action), took the Best Narrative Feature award. Next, Itty Bitty Titty Committee will be screened at the opening night gala of London’s 21st Lesbian & Gay Film Festival.

‘Billy the Kid’: The Documentary

Additionally, Jennifer Venditti’s Billy the Kid, a look at a quirky 15-year-old’s coming of age in a small Maine town, was chosen as the Best Feature Documentary.

Runners-up were Michael Jacobs’ Audience of One and Harris Fishman’s Cat Dancers.

Audience of One tells the story of a Pentecostal minister who, after receiving a vision from God, sets out to make a science-fiction movie based on the biblical tale of Joseph, while Cat Dancers shows how the lives of Ron and Joy Holiday, “the world’s first exotic cat entertainers in the 1960s,” were impacted when a third party – “dashing young Chuck Lizza” – joined the act.

Ronald Bronstein has spent the last seven years three floors below street level in the dingy projection booth of the Museum of Modern Art in nyc. There, deprived of both sunlight and fresh circulating oxygen, he has screened and watched an average of 600 movies a year. This is his first time making one.

Among the scheduled films are:

Pratibha Parmar’s Nina’s Heavenly Delights (left) tells the story of a young woman who, following the death of her father, returns to Glasgow where she becomes involved with her brother’s girlfriend. The film stars Shelley Conn, Laura Fraser, and Ronni Jhutti.

Christopher Larkin’s 1974 drama A Very Natural Thing follows a priest-turned-teacher who falls in love with a businessman. This little-seen, ultra low-budget production has its moments, but there’s both too much and not enough sex – the sexual encounters are supposed to titillate, but they are never arousing; as a result, the sex scenes end up being pretty dull. That said, A Very Natural Thing is worth watching because it offers a glimpse into gay New York five years after Stonewall, and several years before the AIDS explosion.

Jack Hazan’s 1974 documentary A Bigger Splash will be screened to commemorate David Hockney’s upcoming 70th birthday. In his description of the film, Brian Robinson explains that “director Jack Hazan and his crew followed David Hockney and his circle between 1971 and 1973. Meet Ossie Clark and his wife (Celia Birtwell), art dealer Kasmin, the beautiful boyfriend Peter Schlesinger and the assistant Mo McDermott. Hazan seems to have had total access to Hockney in London and Los Angeles. We see Hockney at work on some of his best-known paintings and the film also includes a controversial scene of two men making love which led to Hazan being threatened with prosecution. A Bigger Splash ran for over a year on its first UK release but has since unfairly disappeared from view.”

In what is described as a “rare onstage interview,” Hazan will talk about the film after the screening.

Guy Maddin’s balletic Dracula: Pages from a Virgin’s Diary (2002, right) is one of the festival’s most curious entries. The description reads: “A collaboration with the Winnipeg Royal Ballet, Guy Maddin’s silent interpretation of the classic gothic, bodice-ripping tale is a dazzling dance of beauty and darkness. Filmed in black and white with monochromatic effects, this homage to silent horror magically transports us into a dream-like fantasy world of the lustful vampires and fair maidens of yesteryear.”

The closing night gala presentation will be a modern take on Oscar Wilde’s The Picture of Dorian Gray (above). Directed by Duncan Roy, the moral fable – transferred to 21st-century Manhattan – stars David Gallagher (as the beautiful but soulless Dorian), Noah Segan, Christian Camargo, and Aleksa Palladino.

Among the European entries are Franck Guérin’s Un Jour d’été / A Summer Tale (left), about two close friends, one of whom unexpectedly dies; Pernille Fischer Christensen’s En Soap / A Soap, in which a soon-to-be transsexual waits for permission to switch genders; and Tudor Giurgiu’s Legaturi Bolnavicioase / Love Sick, a drama set in Budapest.

Sadly, it’s the type of tale about intolerance and budding sexuality that, more than 40 years later, would still give apoplectic fits to religious nuts and to the sexually demented p.c. crowd (who would accuse the older boy of being a sexual predator). The subtle directorial job was performed by Jean Delannoy, probably best known for the 1946 drama La Symphonie pastorale.

It was sort of part of my top ten list, in a special category called “should-be-part-of-the-list-but-can’t-be” because it was commissioned as a TV film by ARTE, the French-German cultural channel, and never screened commercially in theatres in its country of origin (which it would need to do to qualify for my list).

It was part of the Official Competition in Rotterdam in 2006 and is currently making the festival rounds. It has won quite a few awards as well, including several Best First Feature prizes. Though any opportunity to see it is of course more than welcome, it is a shame that it is “stuck” in the Gay/Lesbian circuit, because it is not really (only) about that.

In any case, it is already out on DVD in the UK as “One Day in Summer”, and I’m quite sure it’ll find its way to audiences in the US through a gay DVD distributor (again, sadly, but at least some people will get to see it).

Unfortunately, I won’t be in London for the festival. Here’s hoping that at least some of those titles will pop up at the various film festivals here in Los Angeles.

Do you have it in your top-ten list for ’06? I remember looking at your list a while back, but I can’t recall the exact titles. Gotta check it out again.

Wow! That’s quite a line-up. I’d recommend Shortbus, A Soap, The Bubble, Glue, Love Sick and especially Un jour d’été… that was one of my favourite films of 2006; I think I have seen it about 5-6 times now and every time I keep noticing different stuff; try looking at the film from different perspectives: the mother of the friend, the father, the mayor, the sister… there are a thousand little stories tucked just underneath the surface, waiting to be picked up by alert members of the audience. Check it out!