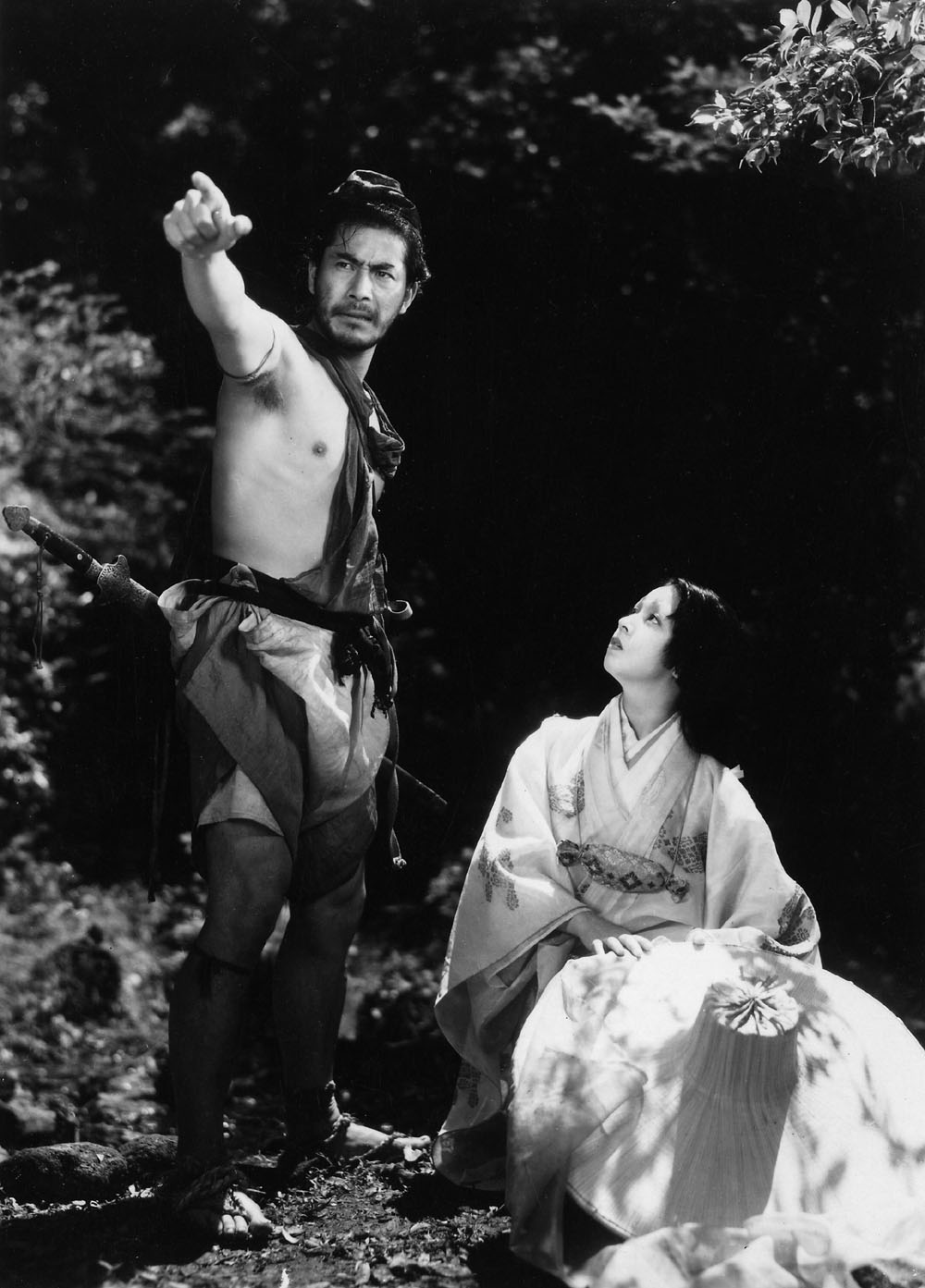 Akira Kurosawa’s 1950 classic Rashomon, which officially introduced Japanese cinema to the world at large, will be the next film presented as part of the Academy of Motion Picture Arts and Sciences’ series “Monday Nights with Oscar.” The East Coast premiere of the new digitally restored print of Rashomon will take place on Monday, Nov. 17, at 7:30 p.m. at the Academy Theater in New York City.

Though it revolves around the rape of a woman and the murder of her Samurai husband, Rashomon, co-adapted by Kurosawa and Shinobu Hashimoto from Ryunosuke Akutagawa’s stories “Rashomon” and “In a Grove,” is less a crime drama than an examination of the mind-boggling nature of truth. Set in feudal Japan, the film depicts the incidents from four different – and contradictory – points of view: that of the alleged rapist/bandit (Toshiro Mifune); the Samurai’s widow (Machiko Kyo, delivering the film’s strongest, least mannered performance); a woodcutter (Takashi Shimura) who claims to have witnessed the crime; and, via a medium, the ghost of the unfortunate Samurai (Masayuki Mori).

I should add that Rashomon boasts excellent black-and-white cinematography by Kazuo Miyagawa. The film’s title, by the way, refers to the gatehouse in front of which the woodcutter, hiding from heavy rainfall, narrates the various tales to a boisterous commoner.

In Hollywood, Rashomon was remade as The Outrage (1964), a generally panned Western directed by Martin Ritt, and starring Paul Newman, Claire Bloom, Rod Steiger, and Edward G. Robinson. Kurosawa’s film has also influenced numerous other productions, among them The Usual Suspects (1995), Courage Under Fire (1996), Where the Truth Lies (2005), and the recent sleeper hit Vantage Point (2008). 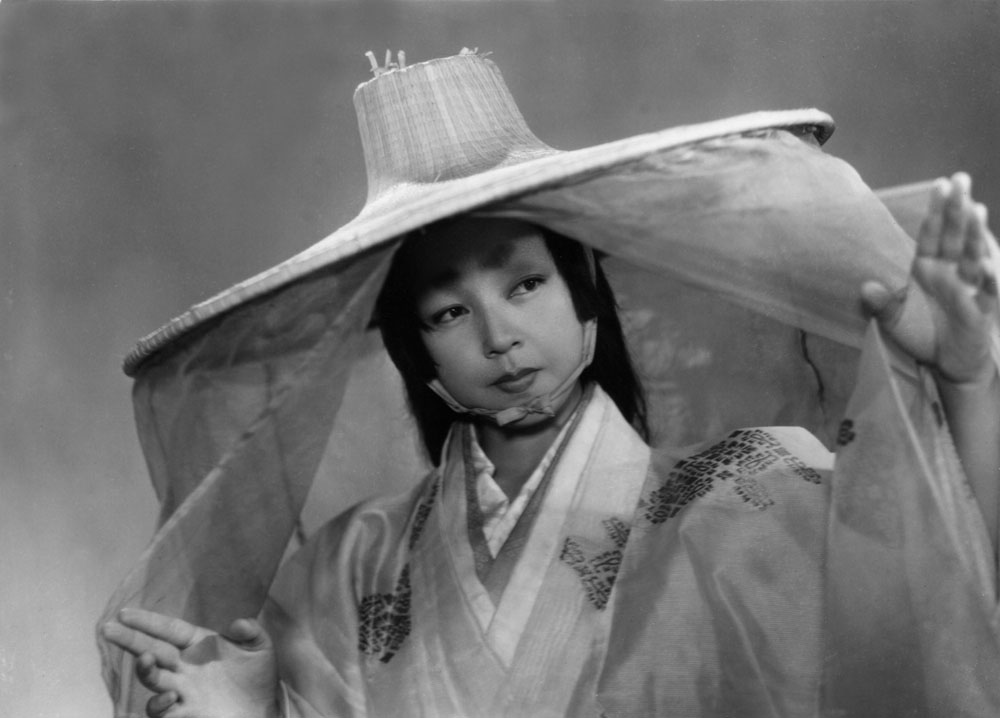 This Rashomon screening will feature the new restoration from the Academy Film Archive in association with the Kadokawa Culture Promotion Foundation and The Film Foundation. 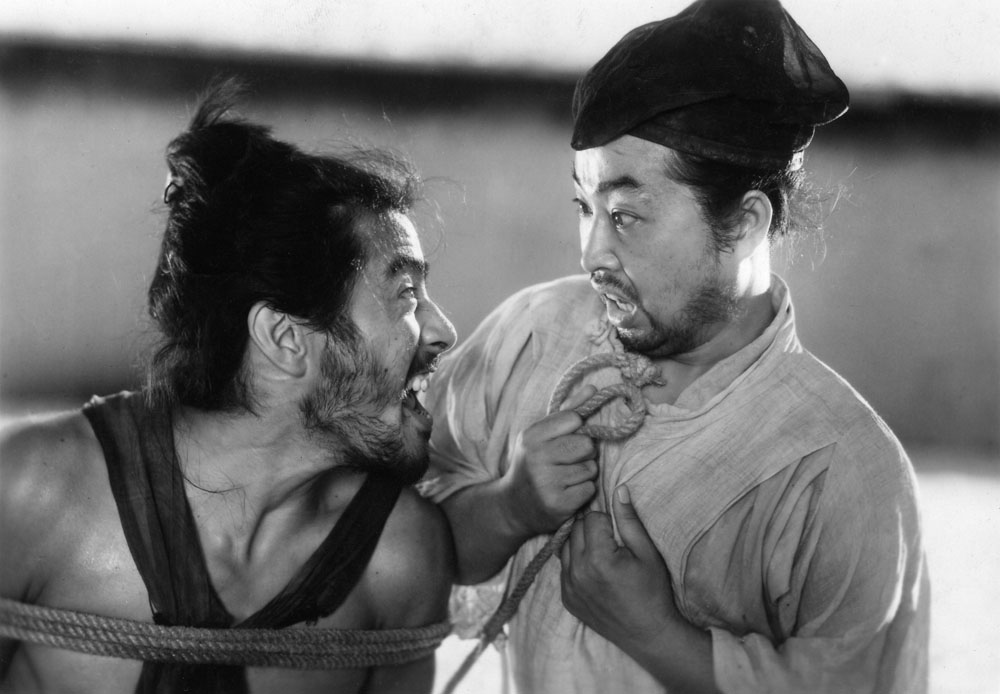 Tickets for Rashomon are $5 for the general public and $3 for Academy members and students with a valid ID. The Academy Theater is located at 111 East 59th Street in New York City. Doors open at 6:30 p.m. All seating is unreserved. 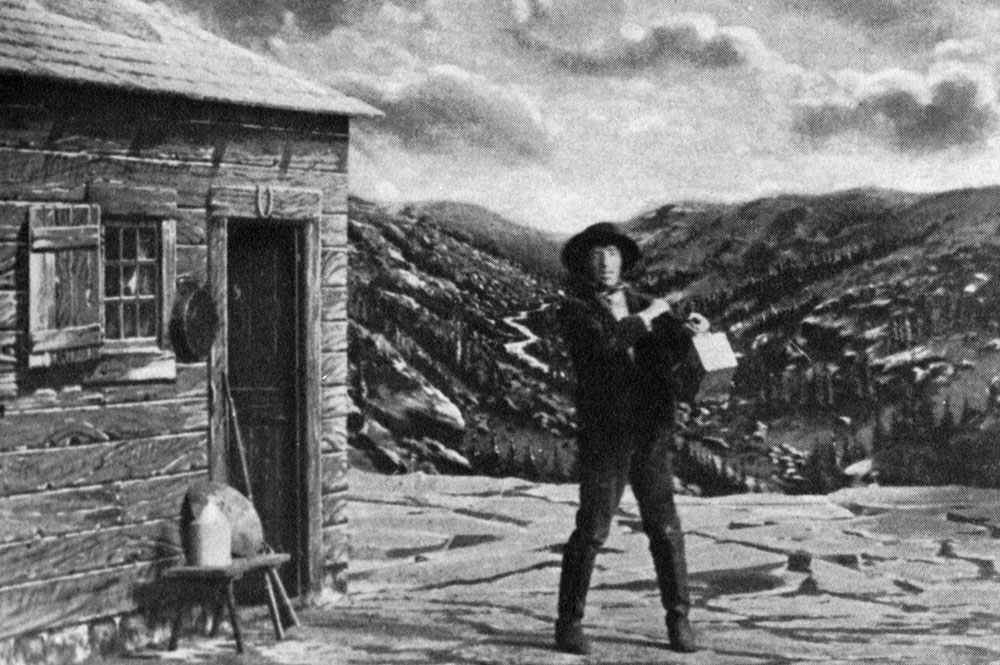 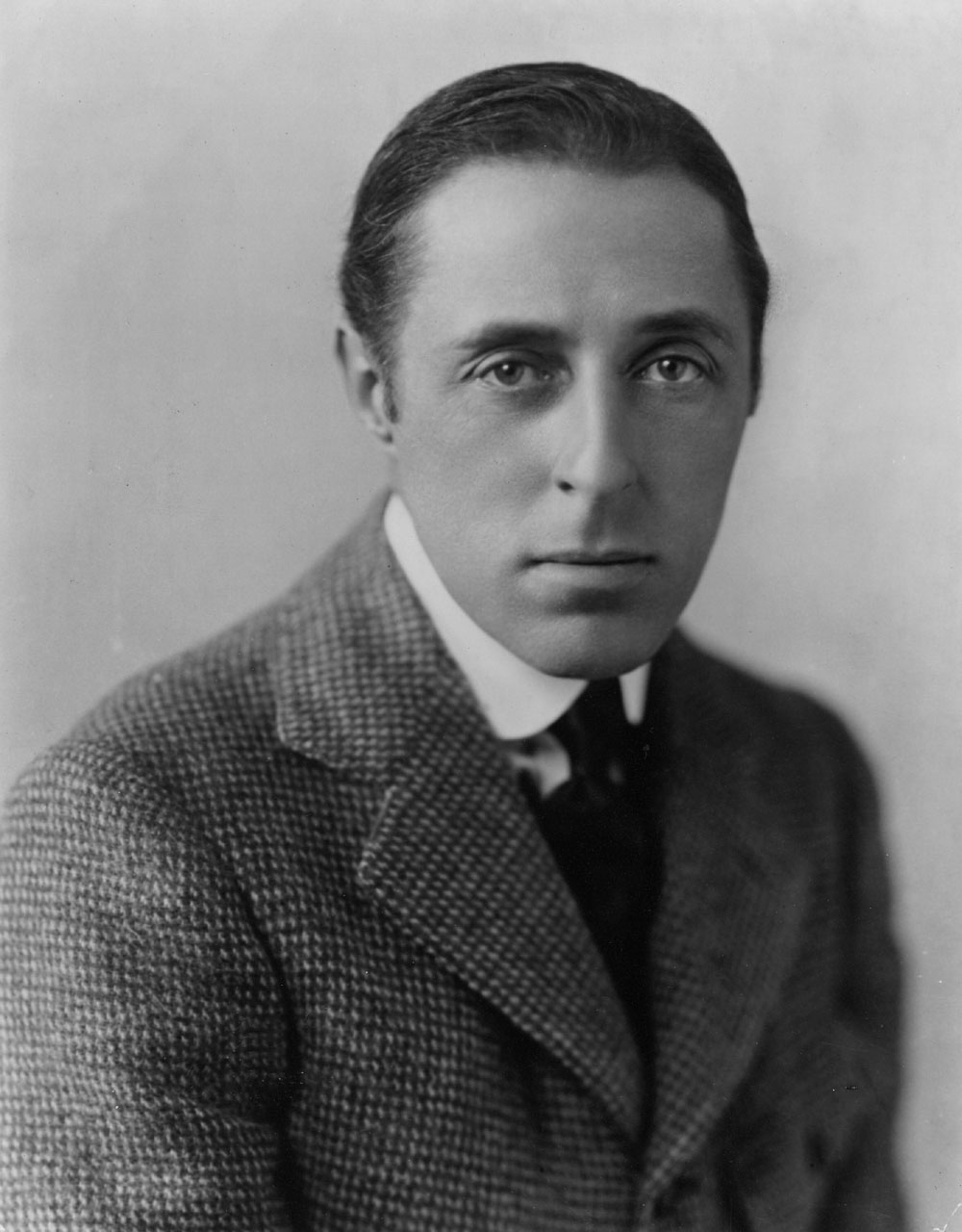 “A Century Ago: The Films of 1908” will be presented by the Academy of Motion Picture Arts and Sciences on Monday, Dec. 1, at 7:30 p.m. at the Linwood Dunn Theater in Hollywood. The program will be repeated on Thursday, December 4, at 7 p.m. at the Christopher B. Smith Rafael Film Center in San Rafael, California.

“A Century Ago” will feature a number of 1908 shorts, among them Edison’s Rescued from an Eagle’s Nest (above, lower photo), featuring a performance by none other than D.W. Griffith (right); Biograph’s After Many Years, starring the Official First Film Star, Florence Lawrence, and in which new director Griffith tries out parallel cutting and camera movement; Vitagraph’s trick film The Thieving Hand; Gaumont’s Fantasmagorie, animated by Émile Cohl; Selig’s The Count of Monte Cristo (above, top photo), starring Hobart Bosworth; Pathé’s comedy Troubles of a Grass Widower, starring Max Linder (curiously, as per the IMDb, this is a 1912 short); and one of the earliest Italian productions, the hand-tinted Le Farfalle (Butterflies).

As in past years, Randy Haberkamp will provide historical context for the rare films, which will be accompanied by Michael Mortilla.

I’m assuming that Randy (who was a great help when I was working on my Ramon Novarro bio) will have something to say about the Motion Picture Patents Company (MPPC), founded in December 1908. With an eye on the fast-growing film/nickelodeon business, the MPPC – spearheaded by Thomas Edison (the mean-looking gent in the first row of the picture below, fourth from the left) – did its best to destroy competition from independent filmmakers. The MPPC oligarchy, however, apparently failed to bring the right people on their side. The independents prospered so much (especially after many of them moved to the Los Angeles area and began promoting star attractions) that they eventually became an oligopoly of their own, whereas the MPPC was to have its patents voided a few years later. 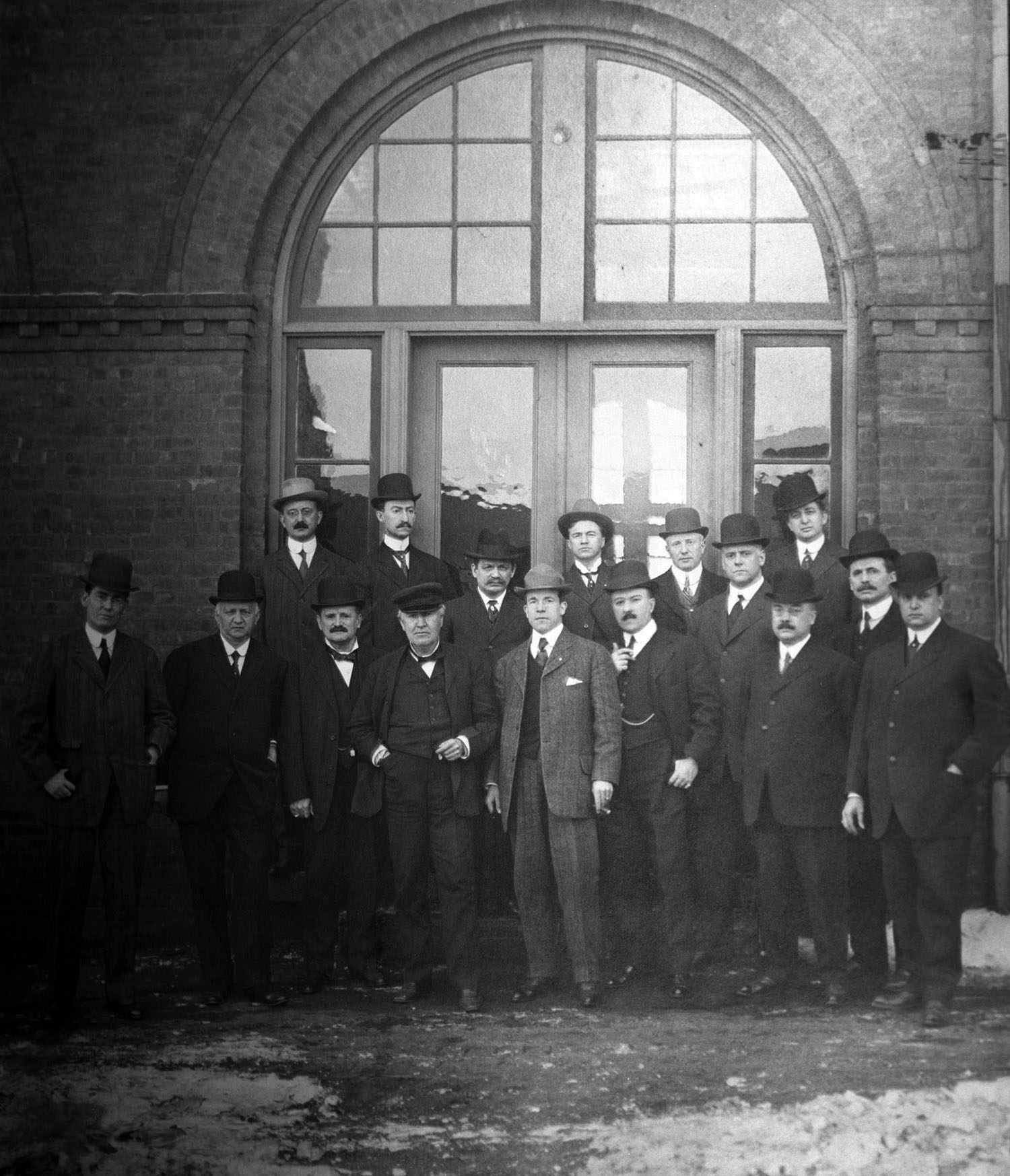 Most films will be screened from 35mm prints drawn from the collections of the Academy Film Archive, the Library of Congress, and the UCLA Film & Television Archive, among others.

Tickets to “A Century Ago” in Hollywood are $5 for the general public and $3 for Academy members and students with a valid ID. Tickets are available for purchase online at www.oscars.org, by mail, or at the Academy box office during regular business hours. Doors open at 6:30 p.m. All seating is unreserved.

The Linwood Dunn Theater is located at 1313 Vine Street in Hollywood. Free parking is available through the entrance on Homewood Avenue (one block north of Fountain Avenue). For additional information, visit www.oscars.org/events or call (310) 247-3600.

Tickets for “A Century Ago” in the San Francisco Bay Area are $10 for the general public and free for Academy members. Tickets may be purchased through the Smith Rafael Film Center. Doors open at 6:30 p.m. All seating is unreserved.

Google has recently launched an online photo gallery featuring images from Life magazine’s archives, many of which have never been seen publicly before. The new Google service is available at http://images.google.com/hosted/life; it currently offers 2 million photos, from the 1860s to the 1970s.

In the coming months, Google plans to scan all 10 million photos from the Life magazine library. Life‘s photo archive will also be made available on the magazine’s website in late February 2009.

Miriam Hopkins on the ‘Time’ cover

The Time cover above shows Miriam Hopkins in the title role in Becky Sharp, the 1935 film adaptation of W.M. Thackeray’s Vanity Fair. Hopkins received her one and only Best Actress Academy Award nomination for playing Thackeray’s antiheroine in the Rouben Mamoulian-directed production, which happens to be the first three-strip Technicolor feature film ever made.

Additionally, Miriam Hopkins co-starred opposite Bette Davis in a couple of melodramas made at Warner Bros.: Edmund Goulding’s The Old Maid (1939) and Vincent Sherman’s Old Acquaintance (1943). The latter movie would be unofficially remade as The Turning Point (1977), directed by Herbert Ross, and starring Anne Bancroft and Shirley MacLaine. An official remake would follow in 1981, directed by George Cukor, and starring Jacqueline Bisset and Candice Bergen.

Miriam Hopkins died of a heart attack in 1972.

100 Films for the Ideal Cinematheque

Seventy-eight film critics and historians – mostly from France or the Francophone world, apparently – among them screenwriter Jean-Claude Carrière, screenwriter-director Claude Miller, and author-documentarian, poll organizer, and editor of the book 100 Films pour une Cinemathèque Idéale Claude-Jean Philippe – have selected their top 100 films for the “ideal cinematheque.” That is followed by a list featuring their picks for the top 50 filmmakers.

There are only two Best Picture Oscar winners in the list: The Godfather (1972) and, gasp, The Deer Hunter (1978). Not surprisingly, the list is dominated by auteurish Hollywood and French cinema titles. In other words: Nothing directed by Henry Hathaway, Michael Curtiz, William A. Wellman, Mitchell Leisen, William Wyler, W.S. Van Dyke, Julien Duvivier, Jean Delannoy, or René Clément. (George Cukor and Elia Kazan managed to be included for the bloated – but auteurish – A Star Is Born and America America, respectively.) And you’ll be hard-pressed to find “producer’s films” like Gone with the Wind or Rebecca or Casablanca in the list.

Among the silent films, only the most well-known, prestigious titles were included, e.g., Greed (1924), Battleship Potemkin (1925), The Wind (1928), City Lights (1931). That makes me wonder how many silents those critics and historians have actually watched – or even heard of.

The biggest surprise is probably the inclusion of Charles Laughton’s The Night of the Hunter (1955) as the #2 title, though I must admit that I’d never have expected to find Fritz Lang’s Moonfleet (1955) – which is actually quite enjoyable – anywhere in such a list, either.

No films from Africa were included. From Asia, there are a handful from Japan and one from India (the tedious The Music Room). From the Americas, the only non-Hollywood entry is Luis Buñuel’s Mexican melodrama El (1953), in my view one of the director’s very worst films. Australian and New Zealand films are nowhere to be found. And from Europe, there isn’t a single 100 percent British production in the list – John Huston’s beautiful The Dead comes closest – and nothing from Eastern Europe, excepting a few scattered Russian entries. Italy, Spain, Germany, and Sweden (the only Ingmar Bergman entry is Fanny and Alexander) are quite underrepresented, with – at most – a handful of films from each country. (Seventy-seven of the 100 films are either French or American productions or co-productions.)

Perhaps all those omissions prove nothing. On the other hand, perhaps they’re proof that French critics and historians are as narrow-minded and insular as their American counterparts.

The Night of the Hunter (Charles Laughton) 47

Singin’ in the Rain (Stanley Donen and Gene Kelly) 39

I’d take a while to put it together — and it would be a bit too long to leave on a reply, I guess… Just browsing my Movie Collector with grades of 5, I would have “Red / Rouge”, many of the Joseph L. Mankiewicz’s (“Suddenly, Last Summer”, “Julius Caesar”, “All About Eve”, “A Letter to Three Wives”), “Dangerous Liaisons”, “Ball of Fire”, François Ozon’s short “Victor”, D.W. Griffith’s “Broken Blossoms”, “The Sealed Room” and “A Corner in Wheat”, Visconti’s “Senso”, “Pillow Talk”, “Meet John Doe”, “Mildred Pierce”, Douglas Sirk’s…

What would be *your* choices?

Fascinating read (it’s great to have the images, the sounds and even the feelings you’ve experienced watching those movies race back to you in a vertigo-mad kaleidoscope while reading the list).

Andre, why don’t you ask your peers and readers to come up with an 100 Films for the ALTFG?