Michelle Hutton 11 years ago
Tim Allen and Tom Hanks’ voices can be heard in Toy Story 3.

Clearly, Toy Story 3 has pushed aside Harald Zwart’s The Karate Kid. Starring Jackie Chan, Jaden Smith,and Taraji P. Henson, the remake of the 1984 Ralph Macchio-Pat Morita movie was a distant no. 2 with $3.44 million on Monday – nearly half of what it earned a week ago and less than $1,000 per theater ($940 to be exact).

That’s still good for a $40 million movie, but it seems increasingly unlikely that The Karate Kid will cross the $200 million at the domestic box office as some had predicted.

Partly thanks to inflation and higher 3D/IMAX ticket prices (which can add up to 40 percent to the cost of a 2D/”regular theater” movie ticket), Disney/Pixar’s Toy Story 3 has become the first Pixar release to earn more than $100 million on its debut weekend.

That’s the great news. The not so great news is that Toy Story 3 disappointed those who were expecting an opening as high as $125 million. (The studio’s official expectations were ridiculously modest, at $85m-$90m.) For comparison’s sake: Shrek the Third took in $121 million on its debut weekend three years ago.

Another comparison: just like Toy Story 3, Tim Burton’s Alice in Wonderland, starring Johnny Depp and Mia Wasikowska, grossed around $41 million on its opening Friday (Thursday midnight screenings are included for both movies). Alice in Wonderland, however, went on to earn $116 million over the weekend.

Considering that the reviews for Toy Story 3 have been much better than those for Burton’s 2D-to-3D fantasy, Toy Story 3 should have fared better – not worse – than Burton’s fantasy film. (Not to mention the fact that ticket prices have gone way up since Alice in Wonderland opened in early March.)

How much Toy Story 3 will ultimately gross is debatable. According to Ben Fritz in the Los Angeles Times, in the domestic market Pixar releases have grossed on average a little over four times their debut weekend’s take. That would mean about $450 million for Toy Story 3, more than any other animated feature in history (not adjusted for inflation or 3D/IMAX surcharges).

However, sequels tend to gross a higher percentage of their final take on their first weekend out. Also, Toy Story 3 will be losing a number of its profitable 3D/IMAX screens when M. Night Shyamalan’s The Last Airbender opens in two weeks. The following weeks, Despicable Me will land at more 3D theaters.

Harald Zwart’s The Karate Kid, starring Jackie Chan, Jaden Smith,and Taraji P. Henson, was down one spot from last weekend, grossing $29 million (down 47.9 percent) in second place, according to studio estimates found at Box Office Mojo. Some had been predicting a more modest drop (closer to 40 percent), but Toy Story 3 clearly siphoned off some of The Karate Kid‘s target audience.

Even so, The Karate Kid will be crossing the $100 million mark some time today. It’s expected to finish the weekend with a grand total of $106.2 million. That more than covers its $40 million production budget, even considering that studios generally get about 50-55 percent of a movie’s total box office gross. (Note: Generally speaking, studios get a larger cut from their movies’ first couple of weekends out.)

June 19 afternoon update: Lee Unkrich’s Toy Story 3, featuring the voices of Tom Hanks, Tim Allen, Joan Cusack, and others, opened at 4,028 North American theaters on Friday, June 18, grossing an astounding $41 million, or $10,179 per theater, according to Box Office Mojo. Partly thanks to inflation and higher 3D/IMAX ticket prices, Disney/Pixar’s Toy Story 3 is bound to become the first animated Pixar release [not the first animated feature, as previously reported] to earn more than $100 million on its debut weekend.

For comparison’s sake, Tim Burton’s Alice in Wonderland, starring Johnny Depp and Mia Wasikowska, grossed around $40 million on its opening Friday in early March (ticket prices were lower then – no kidding) and went on to earn $116 million over the weekend. The reviews for Toy Story 3 have been much stronger than those for Burton’s 2D-to-3D fantasy; in other words, Toy Story 3 could fare even better by Sunday evening.

Harald Zwart’s The Karate Kid, toplining Jackie Chan, Jaden Smith,and Taraji P. Henson, was down one spot, collecting $8.9 million (down 53 percent from last Friday). Had Toy Story 3 not opened this weekend, The Karate Kid would have maintained its lead at the box office. But now there’s no chance it’ll ever be the no. 1 movie again.

In any case, The Karate Kid will surely cross the $100 million mark either later this evening or, more likely, sometime on Sunday.

Toy Story 3 will dominate this weekend at the North American box office, but how strong will its take be?

Estimates for Pixar’s extremely well-received 3D effort range from $85 million to $125 million – and $40 million is quite a wide gap. Previous Pixar releases such as Finding Nemo and The Incredibles opened to $70 million when ticket prices were cheaper and 3D movies were a thing of the past, not the future. It’s probably safest to expect something in the “mid-range,” or about $100-$105 million. But don’t be at all surprised if the $125 million prophecy is fulfilled.

Warner Bros.’ Jonah Hex, the other major release this weekend, is expected to flop – just how miserably remains to be seen. Estimates range from $8-$12 million.

Part of the problem is that not many know the comic strip on which the film is based; it’s gotten poor reviews; and Josh Brolin may be a respected actor, but he isn’t a major box office lure. Megan Fox and John Malkovich co-star.

The Karate Kid will do well, with estimates ranging between $27-$35 million for the weekend. That’s about 50-60 percent of what the movie earned a week ago. Jackie Chan and Jaden Smith star. 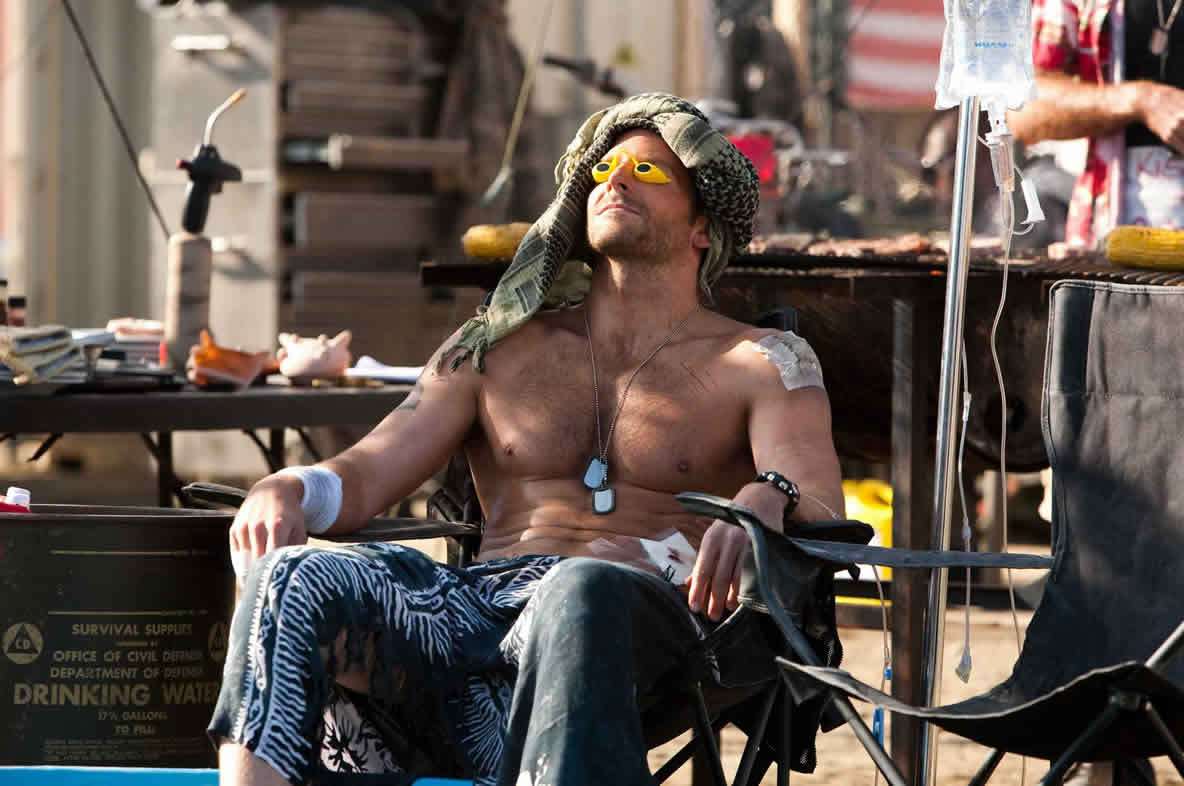 Bradley Cooper shirtless in The A-Team.

At a distant no. 2, Joe Carnahan’s The A-Team, starring Bradley Cooper, Liam Neeson, and Sharlto Copley, took in $25.66 million. The action flick was followed by Shrek Forever After, featuring the voices of Mike Myers, Cameron Diaz, Antonio Banderas, Eddie Murphy, and Julie Andrews, with $15.77 million.

Neither Iron Man 2 nor Robin Hood has been (or will be) able to recover their $200 million production costs at the domestic box office. That’s where the foreign and ancillary markets come to the rescue: Iron Man 2 currently stands at $295 million internationally, while Robin Hood has taken in $183.3 million.

The Karate Kid grossed a surprisingly strong (estimated) $56 million over the weekend, according to Box Office Mojo. That’s nearly twice what many had been predicting.

But wait, The Karate Kid is a remake of a 26-year-old movie directed by John G. Avildsen, and starring Ralph Macchio and Pat Morita; one that for the most part received less-than-enthusiastic reviews from 2010 film critics. Well, that says a lot about the kind of new, fresh, original material audiences are supposed to be craving for.

Anyhow, 2010 has its first official sleeper hit – The Karate Kid cost about $40 million – although it’s still too early to tell how far the fighting underdog tale will go. Word of mouth, as per CinemaScore, has been good: a straight A.

At a distant no. 2, Joe Carnahan’s The A-Team earned an estimated $26 million – or less than half The Karate Kid collected. Starring Bradley Cooper, Liam Neeson, and Sharlto Copley, the $100 million-budgeted action flick is doomed to become a major loser for Fox unless it performs very well overseas.

A bad sign: The A-Team‘s box office take went down on both Saturday and Sunday. Another bad sign (and a sign of bad scheduling): it opened to only $15 million at 35 international markets, according to The Hollywood Reporter. Something called the World Cup is going on, after all.

Many reviewers have been less than kind to this remake of the 1984 sleeper hit starring Ralph Macchio and Pat Morita, but the public has thus far flocked to see it. Whether The Karate Kid will keep its momentum going throughout the weekend remains to be seen. Early weekend estimates had it taking in $52 million.

At a distant no. 2, The A-Team earned an estimated $9.65 million on Friday. The $100 million-budgeted action flick stars Bradley Cooper, Liam Neeson, and Sharlto Copley.

The Karate Kid with $52 million for the weekend? No one was expecting that (in case that early estimate is indeed accurate.) Most were predicting that The Karate Kid, starring Jaden Smith (Will Smith and Jada Pinkett Smith’s son) and Jackie Chan, would gross around $25-$30 million on opening weekend. According to Finke’s piece, early, rough estimates indicate the remake of the 1984 semi-classic starring Ralph Macchio and Pat Morita grossed about $19 million on Friday (June 11) alone.

Starring Bradley Cooper and Liam Neeson, among others, The A-Team, a big-screen version of the ’80s TV series that starred George Peppard and Dirk Benedict, earned an estimated $9.5 million on Friday for a potential weekend total of $27 million. Most had been predicting something within the $25-$35 million range.

$150 million is great on a $40 million budget. It went against The A-Team, which cost over $100 million and won. Toy Story 3 cost $190 million so it can use some big numbers. Both are doing well. Only Eclipse and Inception are left to save the box office.

I think The Karate Kid at most will make it to 150 mill, although I was hoping for 200.

Always been a massive supporter of Sex And The City. Fab movie, thought that after such a gap it would be strange seeing our old friends again, but no as soon as the open credits kick in and you hear the familar voice over it’s like your four best friends have never been away.

my name is arrion and i live in statesboro ga.(boring). i think jaden is sooooooooooooooooooooo HOT!!! and CUTE!!!! AND I REALLY……… LIKE HIS UNIQUE STYLE!!!ESPESALLY HIS SISTER`S STYLE!!!! BY THE WAY.. I LIKE U AND JUSTN BIEBER TOGETHER!!! U CAN RAP!!!! JADEN SMITH ROCKS!!!!!!

It’s funny that all those explosives and muscles are getting owned by a little boy with braids. Go Jaden. Will and Jada must be proud that they have another star in the family. This proves that Cooper isn’t a leading man just like Jake G. They are better in ensembles, not by themselves. They can’t all be Robert Downey or Johnny Depp’s.