A holiday delight that resonates from a Preston Sturges screenplay, Remember the Night assays familiar moral territory inconspicuously. As he did with the scripter’s classic Easy Living (1937), Mitchell Leisen directs.

In the earlier collaboration, down-on-her-luck Jean Arthur chances upon luxury, an impetus for the screenwriter to lightly pit haves against have-nots. In Remember the Night, new to DVD from the Universal-TCM Vault Collection, star Barbara Stanwyck initially has less serendipitous designs upon good fortune.

Preston Sturges is not as concerned with economic wealth this time around. Instead, the prosperity of kindness is the reason for the season when assistant D.A. John Sargent (Fred MacMurray) bails out suspected shoplifter Lee Leander (Barbara Stanwyck) over Christmas.

Of course, his legal maneuvering compels a yuletide in the joint beforehand, but his subsequent decency springs free the tough cookie. Virtuous John is headed back to Indiana for the holidays and assumes that Lee might also have a family to visit.

Lee happens to hail from the Hoosier State, too, so she heads over the river and through the woods from New York City along with John. Her estranged mother (Georgia Caine) rejects her upon arrival, but his sympathetic mother (Beulah Bondi) and warm Aunt Emma (Elizabeth Patterson) embrace her as a guest.

Sturges softly evokes the traditional Nativity story in this journey – even a humorous set piece with a cow lightly recalls the tradition of Mary and Joseph – though further allusions are merely suggested. In fact, the screenwriter is at his most subdued with Remember the Night. Director Leisen complements with his trademark precision rendered delicately and his cynical eye likewise controlled.

The affluence examined in Remember the Night is not monetary, but measured in goodness. The Sargent family enjoys a modest life presented with appropriate sentimental trimmings and nothing more. The generosity Lee encounters from John and his down-home relations reveals the richness of love – romance emerges expectedly.

As John falls for Lee, his moral parameters become more fluid. As Lee falls for John, her integrity emerges. In an article that accompanies the film on DVD (one of several archival Special Features found on the disc), Preston Sturges offers his summary concisely: “Love reformed her and corrupted him.” The decency inherent in love is a joyful equalizer. 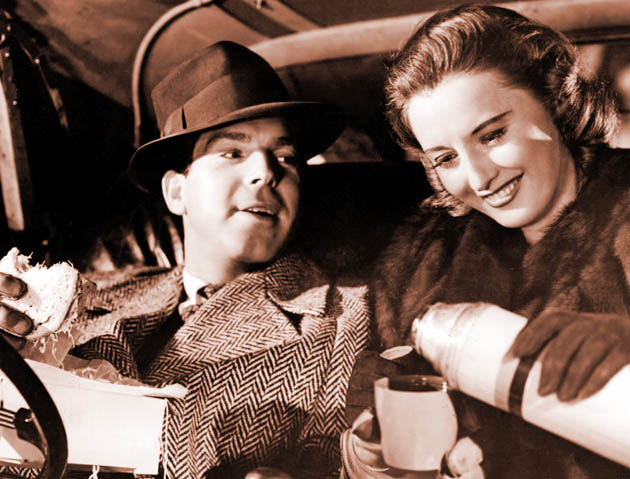 Remember the Night with Fred MacMurray and Barbara Stanwyck. A screenwriter since 1930 (The Big Pond, The Power and the Glory, The Good Fairy), Preston Sturges made his directorial debut with two releases that came out the same year (1940) as Remember the Night: the political comedy The Great McGinty, toplining Brian Donlevy and Akim Tamiroff, and another (somewhat) Christmas-themed effort, the socially conscious comedy-drama Christmas in July, toplining Dick Powell and Ellen Drew. The year after Remember the Night, Sturges would direct Barbara Stanwyck in one of his best-known movies, The Lady Eve, co-starring Henry Fonda.

Fred MacMurray and Barbara Stanwyck, together for the first of their four screen pairings, create an enticing couple. His ordinary charm and conventional geniality balances her resilient humor and canny allure, though the magnetic actress supersedes her leading man in charisma throughout.

In support, veteran character actresses Bondi and Patterson don folksy archetypes with agreeable good cheer. Beyond its notable thematic rewards, Remember the Night is worthwhile for these merry performances.

Adding to the festivities are DVD Special Features, including:

Remember the Night cast info via the IMDb.

Martha Stewart Not Dead Despite Reports to the Contrary - UPDATE: Stewart died in February 2021