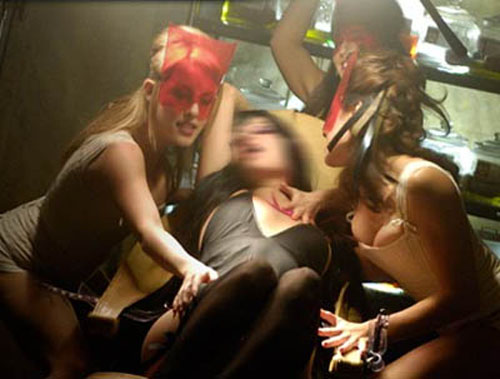 The world premiere of Repo! The Genetic Opera took place at Montreal’s Fantasia Film Festival on Friday, July 18. When I approached the theatre (over an hour early) there were hundreds of dedicated fans – who knew about the film through the original play, snippets of songs, online blogs, or short trailers – wrapped around the building, all waiting to see one of the most imaginative and spellbinding films to come out in recent memory. Some people had driven across the border to be there that night; others had made signs begging for extra tickets to the sold-out show.

When I entered the building, the energy was overwhelming. Everybody inside was soaked in enthusiasm, biting their nails while waiting to be herded in. The media/VIP section wasn’t quite filled when I got there, but shortly thereafter that lineup had more than tripled. We were told only the first ten VIP or press guests in line would make it in; if there was any room left, they would let in the others. Luckily, I was number six. I had already seen Repo! The Genetic Opera a few days earlier at a press screening, but Repo! is the type of film that begs to be watched several times in order to take it all in (just for the background art alone). Also, the second time around I could sing along (with great confusion to my neighbor).

As audience members walked into the theatre, they were greeted by women in small white dresses, wearing see-through red plastic shields that covered the top half of their faces. They were handing out the playbill to Blind Mag’s final show. (Later, audiences would realize that those ushers were nurses in the Repo! world, while Blind Mag, played by Sarah Brightman, was the string that tied the film’s events together.)

In attendance were director Darren Lynn Bousman, writer/actor Terrance Zdunich, co-writer Darren Smith, producer Daniel J. Heffner, actor Bill Moseley, and actress Alexa Vega. I was fortunate enough to get interviews earlier in the day with Bousman, Vega, Zdunich, and Moseley, who were all thrilled and perhaps a little nervous about that evening’s screening.

The event’s MC was Fangoria‘s Tony Timpone, who seemed to be as excited to be there as the cast, crew, and audience members. He brought in Bousman, who gave a quick introduction to the film. Then the show began.

Repo! The Genetic Opera starts almost fifty years into the future, more than two decades after the creation of GeneCo – a corporation in the organ-leasing business. They fuel the human desire to improve one’s looks, but that comes at a high cost (and with a hefty interest rate). If a patient misses a payment, the Repo Man (Anthony Stewart Head) pays them a visit and rips the organ from the live client’s body. A nice touch is that each GeneCo organ has a barcode stamped on it.

In this very near – and not so farfetched – future, the city is run by GeneCo and the “industry of beauty,” an industry that rests on the haunches of the dead. The story’s narrator, Graverobber (Zdunich) makes his living by selling a street form of Zydrate – a pain-relieving drug used to numb patients before they go under the knife to enhance their appearances (or to add organs), which Graverobber extracts from the dead.

The basic plot, which takes place during Blind Mag’s Farewell Concert, follows the president of GeneCo, Rotti Largo (opera-trained Paul Sorvino), and his three children, Luigi (Moseley) Pavi (Ogre), and Amber Sweet (Paris Hilton), who are all fighting to become the head of the GeneCo empire. Repo Man Nathan Wallace is their “Legal Assassin,” who, ashamed of what he does, tries to hide his “profession” from his 17-year-old daughter Shilo (Vega). The girl is kept locked up by her father due to a genetic blood disease – passed down from her absent mother – to which there is no cure. Shilo is at the heart of Repo!, embodying the growth from innocence to experience.

The past and paths of each of those individuals are intertwined, and as the story unfolds the viewer gets a little treat of the Repo! heaven that this team of dedicated artists have put together. With twenty amazing rock opera ballads (including a punk-inspired piece, with cameo by Joan Jett) ranging from blood-chillingly gothic to hilariously deviant and tearjerking-ly sentimental, in addition to sexy, messy, and divinely choreographed numbers, Repo! will leave most viewers humming, singing, and slicing for days after.

Sitting through Repo!, I couldn’t help but be reminded of Rocky Horror Picture Show. Not because Anthony Stewart Head has played Dr. Frank N. Furter and not because both films are similar in terms of aesthetics or characters – but because Repo! has emerged during a time that is void of a collective agreement of representation. Repo! is for today what Rocky Horror was for the ’70s. Speaking to this generation’s many different facets, it is truly a historical film event. Years from now, when I have kids or grand kids digging through retro materials from my past, and they go on about how cool Repo! is, I will understand what it felt like when my mother first told me about throwing toast at the screen during Rocky Horror following my discovery of a VHS tape with glossy red lips on the cover. 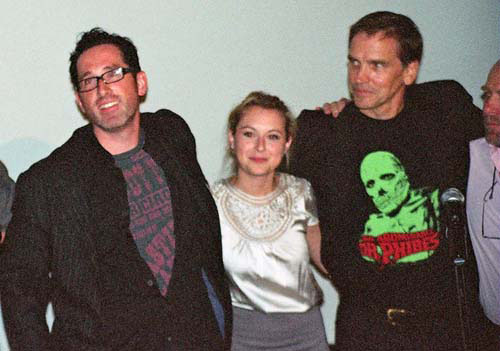 Throughout Repo!, fans roared with cheers after each of the musical numbers. At the film’s conclusion, the vocal celebration could not be calmed for several minutes. Then the cast and crew were introduced, took part in a thirty-minute Q&A, signed autographs, and met with fans. I’m not sure who got more pleasure from that night – the fans meeting the creators and stars, or the stars and creators meeting their fans. The Repo! family was genuinely interested in each of their fans and took time to speak with anyone who went up to them. It was heartwarming (after seeing blood and guts) to see the Repo! filmmakers get the recognition they deserve after making such an incredible film.

Every moment in Repo! – a film that is far different from anything I have ever seen – oozes with talent, be it in the performances, the design, or the narrative. In fact, it wouldn’t be fair for me to single out anyone in particular (though I do think that Zdunich is going to get a lot of attention for his goth rock god portrayal of Graverobber).

Now, it’s time for people to start thinking if this Halloween – or at the next Repo! screening – they will be a Gentern, a Graverobber, a Largo, or a Repo. Although the theatrical release of Repo! The Genetic Opera isn’t until November, hopefully the soundtrack will be released before then. For the time being, to get your Repo! fix check out the samples at the film’s official website, where you can see the trailer, video blogs, clips, and hear some music.

One tip: when you finally do get to see Repo! make sure you stay for the credits; if not to see and acknowledge all of those who worked on it, then so you can hear some great songs that did not make it into the film.

REPO is an creative movie. Love this, it’s fantastic.

I love repo! It is one of the most creative and original movie since RHPS.