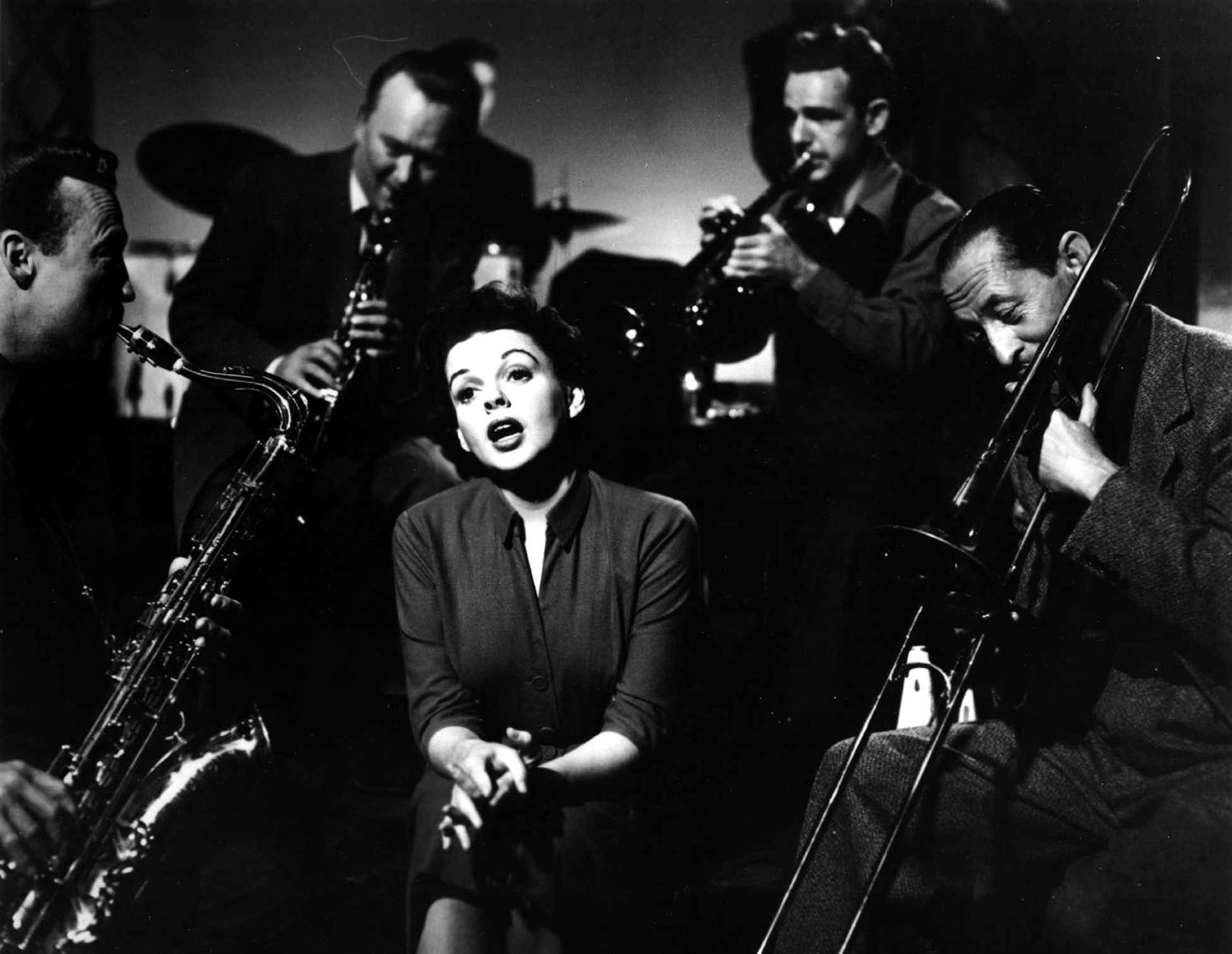 Judy Garland in A Star Is Born: Restored Classics.

Turner Classic Movies’ first-ever TCM Classic Film Festival, which will be held on April 22–25 in Hollywood, will feature the world premiere of a newly restored edition of George Cukor’s A Star is Born (1954), starring Judy Garland and James Mason; the North American premiere of the restored version of Fritz Lang’s Metropolis (1927); and a 50th anniversary screening of Jean-Luc Godard’s Breathless, starring Jean-Paul Belmondo and Jean Seberg.

The TCM Classic Film Festival will also feature a special presentation of Stanley Kubrick’s 2001: A Space Odyssey, including a discussion with Oscar-winning visual-effects artist Douglas Trumbull.

The premiere of A Star is Born will be the festival’s opening night event on Thursday, April 22. TCM will screen a version of the film that was digitally restored by scanning original negatives. As per TCM’s press release, “the result is much better picture quality of all elements of the 1983 restoration, with deeper and richer color than ever before.”

As a result of the 2008 discovery of a 16mm negative in Buenos Aires and the ensuing restoration, Metropolis will be screened with 30 minutes of additional footage unseen since the 1927 Berlin premiere. (Though sections of the 204-minute original film remain missing.) As per TCM’s release, “the newly reconstructed Metropolis features extensive scenes that flesh out many of the supporting characters, fill in previously jarring gaps in the plot and provide additional back story.” The three-man musical ensemble Alloy Orchestra will provide live musical accompaniment.

Also as part of the festival, TCM is partnering with Vanity Fair to promote the publication of Vanity Fair’s Tales of Hollywood (Penguin Books), edited by Graydon Carter. Special panels will feature Vanity Fair writers, along with actors and filmmakers who will talk about Hollywood’s behind-the-scenes goings-on.

The central hub for the TCM Classic Film Festival will be Club TCM, located inside the Hollywood Roosevelt Hotel, the site of the first Academy Awards ceremony back in 1929. All passholders will be allowed entry into Club TCM, which will include a festival lounge, panel discussions, social events, a boutique, and poolside screenings. Other event locations include Grauman’s Chinese Theatre and the Egyptian Theatre.

Festival passes are now on sale at the TCM website website. The number of passes will be limited, especially for top-level “Spotlight” passes:

The “Essential” Festival Pass: $599 – Includes all privileges available to “Classic” passholders, plus entry to the opening-night red carpet screening of A Star is Born at Grauman’s Chinese Theatre and official TCM festival collectibles.

The “Spotlight” Festival Pass: $1,199 – Includes all privileges available to “Classic” and “Essential” passholders, plus entry to an exclusive opening-night party following the red carpet screening of A Star is Born, hosted by Vanity Fair magazine; priority entry to all events; a meet-and-greet breakfast with Robert Osborne; and an official TCM Classic Film Festival poster signed by Osborne. 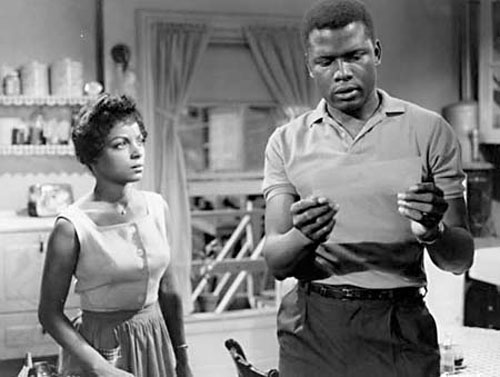 Of the four films – the short Tit for Tat, and the features The Out-of-Towners, A Raisin in the Sun, and Last Train from Gun Hill – I’ve only seen the moderately entertaining John Sturges Western Last Train from Gun Hill, whose most memorable feature is Carolyn Jones as the female lead (actually a supporting role). I’d probably have liked it better had it starred Burt Lancaster and Gary Cooper, or Joel McCrea and Randolph Scott. Or even Alan Ladd and Dana Andrews. I’d have liked it even better had Anthony Mann or Delmer Daves directed it.

This year’s Screen Actors Guild Life Achievement honoree is television and film actress Betty White. The 2010 SAG Awards ceremony will be simulcast live (except for those on the West Coast, which is pretty silly) on TNT and TBS Saturday, Jan. 23, 2010, at 8 p.m. (ET/PT), 7 p.m. (CT) and 6 p.m. (MT). 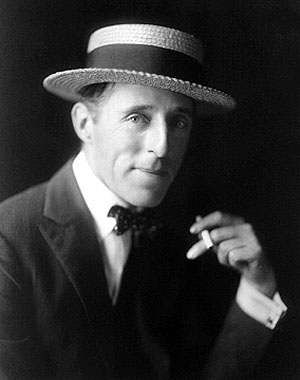 All in 16mm, with live musical accompaniment by Cliff Retallick.

Among the early stars featured in those shorts are Blanche Sweet, Mae Marsh, Robert Harron, Arthur Johnson, Wilfred Lucas, and, according to the LAF website, “a rather murderous” Mary Pickford.

“In 1910, retreating from the harsh East Coast winter which confined them inside the narrow limits of their NYC studio in a 14th st. brownstone,” explains Gunning on the Los Angeles Filmforum site, “D.W. Griffith transported the Biograph film company to southern California. For the next four winters the company made over a hundred one reel (15 minutes) films in the area around Los Angeles, covering every genre in a range of locations: westerns in the deserts and hills; a caveman film in Griffith Park; tales of lost lovers by the seaside; Mexican dramas among the cacti. These brief films laid the foundation for cinema as a narrative art, but, even more, the displayed a beauty of landscape and detail that year[s] later Griffith claimed Hollywood had completely forgotten.”

In the Chicago Tribune, Michael Phillips reports that a long-thought lost Charles Chaplin film has been accidentally found after a film collector made an eBay bid on a nitrate film canister.

Phillips explains that “the footage turned out to be the obscure Chaplin short [Zepped], a World War I propaganda effort designed to buck up British morale, combining stop-motion animation and outtakes and unused alternate shots from films Chaplin made for both Keystone and Essanay studios.

“The hybrid, over which Chaplin apparently exercised no creative control, includes a shot or two from His New Job, the short film Chaplin made for the Chicago-based Essanay during his 23-day residency here in late 1914 and early 1915.”

‘Lysistrata’-Themed Screenings at the Getty Villa

Michael Patrick Kelly’s documentary Operation Lysistrata, Melvin James’ A Miami Tail, and Mai Zetterling’s The Girls will be screened at the Getty Villa’s Auditorium on Saturday and Sunday, Nov. 14-15. Admission is free, but a separate ticket is required for each film.

Having staged Aristophanes’ Peace earlier this season, Los Angeles’ Getty Villa continues its celebration of “the father of comedy” with this three-film series based on the Athenian playwright’s best-known work, the anti-war satire Lysistrata, in which the women of Athens and neighboring cities go on a sex strike so as to force their male partners to reconsider their warring habits.

Of the three, Mai Zetterling’s The Girls (1968) is the one that I’m most eager to catch because it features three Ingmar Bergman stars – Bibi Andersson, Harriet Andersson, and Gunnel Lindblom – as three actresses whose real-life identities end up intertwined with their stage roles in a production of Lysistrata in late 1960s Sweden. The synopsis makes The Girls sound like an intriguing variation of Bergman’s own Persona, released three years earlier.

Operation Lysistrata (above, 2006) documents a staging of Aristophanes’ play right before the US-led invasion of Iraq in 2003 – a small enterprise that was turned into an international anti-war event – while Melvin James’ A Miami Tail (2003) transposes the action of the play from Classical Athens to Hip-Hopping Miami.

Now, in case you truly believe that women are more enlightened than men, a 30-second look at any cable news (circus) show will then prove either that modern women haven’t been refraining from having sex with their male partners in the name of peace, or that their warring significant others have been rolling in the hay with their own comrades-in-arms. Hey, anything to keep the killing going.

Please note: The previously announced screening of Lysistrate, originally scheduled for Saturday, November 14, at 3:00 p.m., has been replaced by Operation Lysistrata due to technical problems with the Lysistrate print.

Photos: Courtesy of The Getty Center

In January 2003, Kathryn Blume and Sharron Bower, two actresses from New York City, thought to organize readings of Lysistrata as a protest of the imminent invasion of Iraq. Originally conceived as a local, citywide event, word of the Lysistrata Project spread rapidly across the Internet, gaining increasing momentum in the space of just a few weeks’ time and eventually morphing into a worldwide “happening for peace.” To the astonishment of all concerned, on March 3, 2003, nearly 1,100 simultaneous productions of Lysistrata were performed in 59 countries around the globe.

In Operation Lysistrata, documentary filmmaker Michael Patrick Kelly etches a moving portrait of Bower and Blume, illustrating how grassroots activism and art can intersect to form the basis of effective social protest. The film is the story of how two women transformed their individual aspirations for peace into a movement that allowed a global community to share in their vision.

Most movingly, the film incorporates many of the documentary recordings that eventually poured in from across the U.S. as well as England, Iceland, Japan, Singapore, Australia, Italy, Montreal, Nova Scotia, Greece, and Cuba.

The poster for this hip, witty, and very sexy recent transposition of the play from ancient Athens to contemporary Miami declared: In this battle of the sexes, these girls won’t lay down! Directed by Melvin James, the film stars a roster of well-known black and Latino comedians and rap and hip-hop artists, including Trina (in her film debut), Sommore, Mr. Cheeks, Neferteri Shepherd, and Benji Brown.

Set and filmed in a Miami neighborhood known as a center of gang violence—with many local residents in supporting roles—a basketball court becomes the urban battleground, and barbershops and hair salons the opposing male and female encampments.

The film is a true sex comedy in the spirit of Aristophanes, and adheres surprisingly closely to the plot and imagery of the playwright’s work. More than once, audience members will find themselves thinking: “Oh, no, she didn’t!”

A classic of late-1960s Vietnam-era feminist cinema, this film by actress-turned-director Mai Zetterling follows the lives of three stage actresses as they prepare to leave their homes and men to set out on a theatrical tour of Lysistrata across Sweden. As the film progresses, on- and off-stage realities begin to blur, and portrayals of the mundane backstage and domestic lives of the traveling actors spin off into extreme enactments of their sexual and political fantasies.

Featuring three of the most celebrated beauties of this period—Bibi Andersson, Harriet Andersson, and Gunnel Lindblom—this small, independent film is a true labor of love. An act of cinematic social protest, Zetterling’s serious comedy of social manners is infused with wry humor, subtle artistry, and a burgeoning feminist vision.

A bit of trivia. The photo of Judy Garland singing The Man that Got away is not from the film. That photo was from an earlier take of the song which was not used. In the film release she is wearing a different outfit with a white collar and her hair is combed back.

Interesting. I’ve seen “A Star Is Born” a couple of times and didn’t notice that.

I would encourage you to view the 1961 version of A Raisin In The Sun as a then “realistic” depiction of Black American family life in the early 1960s. It is one of the few films featuring three strong African American actresses, Claudia McNeil, Ruby Dee and Diana Sands. The film is a classic adaptation of a play to film.

The Out-Of-Towners is a really great film and features a fine performance by Sandy Dennis.

For me, notably, Dennis and Sands are actors who did not live to completely fulfill their destinies as exceptional performers. Any film that features these women, who died quite young, is a treasure.