It’s somewhat unusual for two well-known film celebrities, whether past or present, to share the same name.[1] One such rarity is – or rather, are – the two movie people known as Rex Ingram;[2] one an Irish-born white director, the other an Illinois-born black actor. Turner Classic Movies’ “Summer Under the Stars” continues on Aug. 11, with a day dedicated to the latter.

Right now, TCM is showing Cabin in the Sky (1943), an all-black musical adaptation of the Faust tale that is notable as the first full-fledged feature film directed by another Illinois-born movie person, Vincente Minnelli. Also worth mentioning, the movie marked Lena Horne’s first important appearance in a mainstream motion picture.[3]

A financial disappointment on the Broadway stage – it reportedly lost $25,000 – Cabin in the Sky earned MGM a not inconsiderable $587,000 profit (approx. $8 million today), chiefly because of its low cost. Knowing full well that the studio was taking an investment risk, as many theaters, especially in the American South, would refuse to show the film, producer Arthur Freed (An American in Paris, Gigi) kept the budget below $700,000.

Both Rex Ingram and Ethel Waters reprised their Broadway roles as, respectively, Lucius / Lucifer Jr. and Petunia Jackson. Eddie “Rochester” Anderson, who had been featured opposite Waters in one of the segments of Julien Duvivier’s Tales of Manhattan the year before, was cast as Little Joe Jackson – the musical’s Faust character.

Curiously, Rex Ingram, who plays the devil in Cabin in the Sky, had played God in Marc Connelly’s The Green Pastures (1936), shown on TCM earlier this evening.

The Broadway version of Cabin in the Sky was written by Lynn Root, with music by Vernon Duke and lyrics by John La Touche. 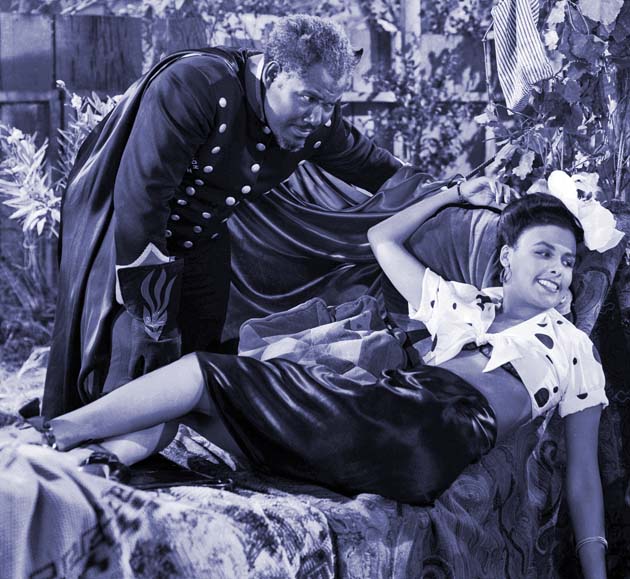 Rex Ingram in ‘Cabin in the Sky’ with Lena Horne.

Next in line is Zoltan Korda’s Sahara (1943), a watchable but uninspired World War II drama with Humphrey Bogart fighting Nazi forces in the titular North African desert. There’s no Ingrid Bergman and no romance in this one, but J. Carrol Naish received a surprising Best Supporting Actor Academy Award nomination. (He lost to Charles Coburn, one of the leads in George Stevens’ The More the Merrier.)

Another all-black effort, Anna Lucasta (1958) stars Eartha Kitt in the title role: a young woman who gives up her life as a streetwalker in order to get married. However, her self-righteous – and incestually inclined – father (Rex Ingram) has other plans in store for her.

Based on a play by Philip Yordan (House of Strangers, Johnny Guitar), Anna Lucasta was inspired by Eugene O’Neill’s Anna Christie, which had starred Blanche Sweet and Greta Garbo in previous film incarnations.

The story also has one key element – the complex father-daughter relationship – in common with The Barretts of Wimpole Street, which had starred Jennifer Jones and John Gielgud the year before. (Norma Shearer and Charles Laughton – plus Fredric March as Shearer’s love interest – starred in the 1934 version.)

Directed by Irving Rapper, a 1949 movie version of Anna Lucasta featured Paulette Goddard in the title role and Oscar Homolka as her father.

And finally, in Gene Nelson’s Your Cheatin’ Heart (1964), which predates Ray and Walk the Line by four decades, George Hamilton plays troubled country Western singer Hank Williams – soon to be seen in the person of Tom Hiddleston in Marc Abraham’s I Saw the Light. Susan Oliver, a capable actress who deserved a more fruitful film career, is Hanks’ wife, Audrey (Elizabeth Olsen in the 2015 movie).

Also worth mentioning, shown earlier today was the timely Tarzan’s Hidden Jungle (1955), in which, as per the TCM synopsis, “hunters drive animals out of a sanctuary so they can shoot them.”

[2] Although largely – and unfairly – forgotten today, the Irish-born Rex Ingram was one of the top filmmakers of the silent era. Among this movies are:

[3] On the big screen, Lena Horne had been previously seen as Ralph Cooper’s leading lady in William L. Nolte’s independently produced The Duke Is Tops (1938); and in a bit role in MGM’s Norman Z. McLeod-directed Panama Hattie (1942), starring Red Skelton and Ann Sothern.

Additionally, as found on the IMDb, Horne could be briefly spotted in Fred Waller’s 1935 short Cab Calloway’s Jitterbug Party.

Rex Ingram Cabin in the Sky image: Metro-Goldwyn-Mayer, via Comet Over Hollywood.

Wow, Rex did Huckleberry Finn! We did see that one a few months back. So much out there I need to see!