‘The Magnificent Heel: The Life and Films of Ricardo Cortez’: Author Dan Van Neste remembers the silent era’s ‘Latin Lover’ & the star of the original ‘The Maltese Falcon’

At odds with Famous Players-Lasky after the release of the 1922 critical and box office misfire The Young Rajah, Rudolph Valentino demands a fatter weekly paycheck and more control over his movie projects. The studio – a few years later to be reorganized under the name of its distribution arm, Paramount – balks. Valentino goes on a “one-man strike.” In 42nd Street-style, unknown 22-year-old Valentino look-alike contest winner Jacob Krantz of Manhattan steps in, shortly afterwards to become known worldwide as Latin Lover Ricardo Cortez of Castile.

Although Cortez’s New York City origins would be eventually revealed – he was born on Sept. 19, 1900, to Austrian/Hungarian Jewish parents – the Spanish moniker was to remain in place for the duration of his career, which encompassed characters of various national, social, ethnic, and ethical backgrounds in about 100 movies over the course of nearly four decades.

In the recently published The Magnificent Heel: The Life and Films of Ricardo Cortez (BearManor, 2017), author Dan Van Neste covers the trajectory of Cortez’s lengthy film career, from his days as the “second-rank Rudolph Valentino” to his Depression Era phase as assorted cheats, pimps, scoundrels, racketeers – and sleuths, most notably Sam Spade in the original film version of Dashiell Hammett’s classic novel The Maltese Falcon.

The Magnificent Heel also delves into Cortez’s at times complicated private life. In 1926, he married actress Alma Rubens, a Hollywood star in her own right following roles in melodramas such as Humoresque, Cytherea, and East Lynne. Rubens also happened to be a hardcore drug addict who would die of pneumonia at age 34 in 1931, leaving Cortez a widower.

As explained in The Magnificent Heel, even though the young Ricardo Cortez’s physical similarity to Rudolph Valentino helped to launch his Hollywood career, it may also have hindered its development.

“Mr. Cortez isn’t Valentino,” opined the Chicago Tribune reviewer about the Latin Lover’s first star vehicle, Raoul Walsh’s 1925 melodrama The Spaniard. “But he’s quite as good an imitation as there is on the market.”

Valentino’s premature death in 1926 – the year Torrent came out – helped to turn his final movie, Son of the Sheik, into a sizable box office hit. Yet it failed to propel the “second-rank Valentino” to first-rank stardom.

Below: Ricardo Cortez romances Swedish import Greta Garbo in her first Hollywood movie, Monta Bell’s Torrent at Metro-Goldwyn-Mayer. Cortez and Garbo were to have been paired up again in another MGM production, Love, based on Leo Tolstoy’s Anna Karenina and to be directed by Russian import Dimitri Buchowetzki (who had previously handled Cortez in another period romantic drama, The Swan). Garbo, however, fell ill during production (there have been claims she actually feigned the illness), forcing shooting to be halted. When production finally resumed, Buchowetzki had been replaced by Edmund Goulding, while Cortez was sidelined in favor of Garbo’s Flesh and the Devil costar and intimate companion John Gilbert. This turned out to be a lose-lose deal for Cortez; in order to work once again with Garbo, he had just turned down Josef von Sternberg’s ultimately acclaimed crime drama Underworld.

Collaborations with important directors: From D.W. Griffith to John Ford

Even if never on the same league as fellow screen lovers Rudolph Valentino, John Gilbert, and Ramon Novarro, Ricardo Cortez reached an undeniable level of success – and, to some extent, prestige, when one factors in his big-name and/or “arthouse” directors.

Among these, though not necessarily at the top of their form in their collaborations with Cortez, were:

Besides, during his heyday from the mid-1920s to the mid-1930s, Ricardo Cortez was featured opposite many of the most important leading ladies of the period – though, once again, not necessarily in their most prestigious efforts.

Sometimes, he made passionate love to them. At other times, whether physically or psychologically, he roughed them up. Not infrequently, he made love to them and roughed them up – lying to them, cheating on them, inducing them to cheat on their husbands or boyfriends, neglecting them so he could focus on his status-oriented goals, or perhaps selling them into the “white slave trade.”

Maybe his dark, bedroom eyes were to blame. Or, during the talkie era, his mellifluous voice. But no matter how untrustworthy his smile or how tired his pick-up lines and declarations of love, movie heroines/victims would (almost) invariably fall for him. 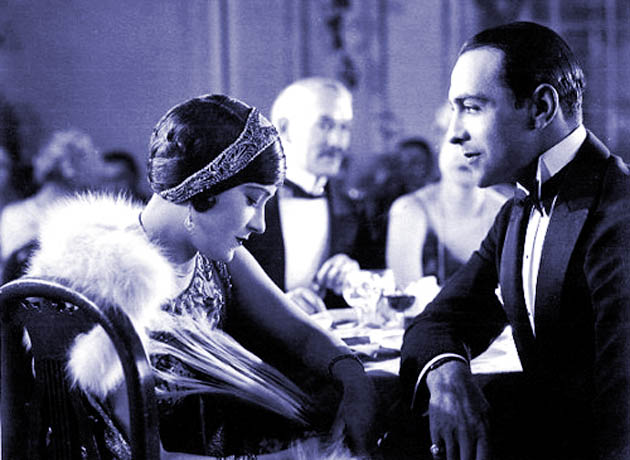 Ricardo Cortez and Gloria Swanson in A Society Scandal. The silent era’s Latin Lover and the Pre-Code era’s multiethnic heel was cast opposite Famous Players-Lasky’s extravagantly garbed top star in the 1924 romantic drama A Society Scandal, directed by one of the studio’s foremost filmmakers, Allan Dwan (Zaza, Robin Hood). In all fairness, the 24-year-old Cortez was neither a Latin Lover nor Swanson’s actual leading man here; his WASP-ish character was named Harrison Peters, while Rod La Rocque played Swanson’s love/hate interest. Notwithstanding Cortez’s secondary role in this Gloria Swanson star vehicle, he romanced a number of prominent actresses during the silent era, among them Betty Bronson, Betty Compson, Lois Wilson, Florence Vidor, and Greta Garbo.

From Gloria Swanson to Greta Garbo

During his silent days at Famous Players-Lasky, Ricardo Cortez was usually cast as, however chauvinistic, sympathetic characters who became some way or other enmeshed with the likes of:

At MGM, there was Greta Garbo. At First National, he was Paris to Hungarian import Maria Corda’s Helen in the humorous The Private Life of Helen of Troy.

From silent hero to talking heel

Despite a relatively successful transition to sound, during the talkie era the plot of Ricardo Cortez’s movies increasingly centered on his leading ladies, with the former Latin Lover largely downgraded to subordinate heels of varying degrees of egotism and ruthlessness. In that regard, he was a more “street” version of fellow early 1930s Warner Bros. leading (con)man Warren William.

According to The Magnificent Heel, illness, bad timing, and poor professional choices prevented Ricardo Cortez from becoming a bigger star during the pre-Production Code era (roughly, 1930–the first half of 1934).

That is especially disheartening when one considers his excellent performance in Roy Del Ruth’s 1931 version of The Maltese Falcon, a characterization far more effective – sly, sensual, enticingly sleazy – than that of Humphrey Bogart in John Huston’s revered 1941 remake.

Equally disheartening is the fact that Cortez’s Hollywood career nosedived after he and Warner Bros. parted ways in the mid-1930s – and that he, unlike Bogart, at the time typecast as minor-league gangsters, would never be lucky enough to make a successful comeback.

Else, Cortez, the very embodiment of jaded cynicism, could have become a first-rate film noir antihero. The closest he ever got to that in an A production was a supporting role in the 1946 Laraine Day vehicle The Locket, directed by John Brahm at RKO. 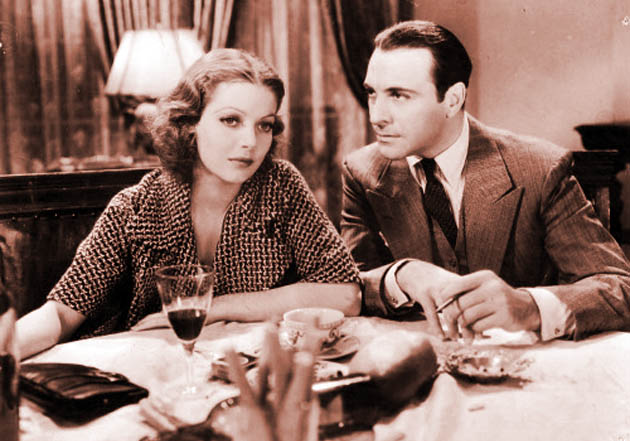 Ricardo Cortez and Loretta Young in Midnight Mary (1933). A Pre-Code MGM release, this William A. Wellman-directed drama features two Warner Bros. contract players of the early 1930s, in addition to the studio’s own Franchot Tone. The plot revolves around good-girl-gone-bad Young becoming enmeshed with crime boss Cortez, only to end up on trial for murder. Guilty or innocent? As in life, moral issues could get quite fuzzy in Hollywood movies of that period, a time when, if given the chance, former Latin Lover Ricardo Cortez excelled as a series of smart, sexy, and dangerous types. Unfortunately, Cortez would never make a major comeback like Humphrey Bogart in the early 1940s; else, he could have become a first-rate film noir star.

With film roles becoming scarcer, Ricardo Cortez tried his hand at directing. But his handful of efforts – seven in total at 20th Century Fox – were all B fare.

The one notable exception was Heaven with a Barbed Wire Fence (1939), chiefly because it was co-written by future Hollywood Ten member Dalton Trumbo, it features future megastar Glenn Ford, and it deals with – still very much relevant – issues such as social inequality, tribal prejudices, and immigration.

By 1950, when he was seen in a supporting role in the RKO programmer Bunco Squad, Ricardo Cortez’s Hollywood career was virtually over.

Following an eight-year gap, he returned for what turned out to be his final feature film: John Ford’s 1958 political drama The Last Hurrah, starring Spencer Tracy and Jeffrey Hunter, and featuring the old Jacob Krantz of Manhattan – way down the long list of Hollywood veterans – as a character named Sam Weinberg.

Cortez’s final role in front of the camera was in the 1960 episode “El Toro Grande” of the popular television series Bonanza. He was cast as Don Xavier Losaro, an appropriately Spanish-named character that could be seen as the “senior version” of his Latin Lovers of yore.

Deeply involved in the brokerage business in the last couple of decades of his life, Ricardo Cortez died at age 76 on April 28, 1977, in New York City.

The Magnificent Heel: The Life and Films of Ricardo Cortez author Dan Van Neste has kindly agreed to do a (lengthy) Q&A about the subject of his book. See below the link to part I of the three-part interview.

Featuring 160 images, among them what The Magnificent Heel‘s press release describes as “photographs of personal items and scrapbooks” the actor had kept as mementos of his career, Van Neste’s 584-page Ricardo Cortez biography is available in softcover and hardback editions through BearManor Media and online retailers. An e-version is also available from the publisher.

The Magnificent Heel: The Life and Films of Ricardo Cortez BearManor Media page.

The Magnificent Heel: The Life and Films of Ricardo Cortez cover: BearManor Media.

The Single Standard: Garbo Ahead of Her (& Our) Time