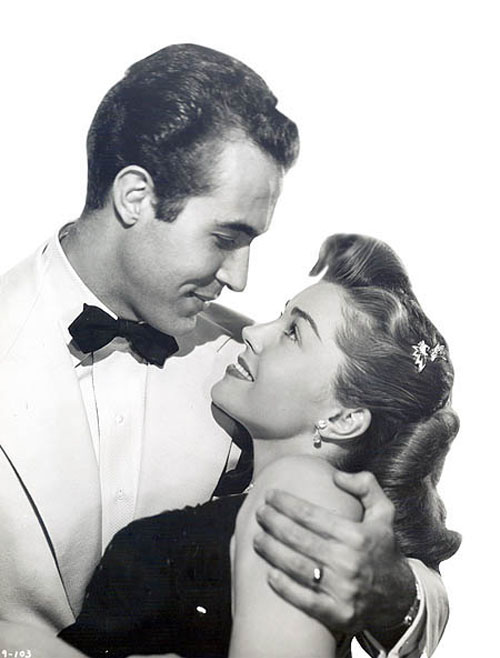 Ricardo Montalban, who co-starred in several 1940s MGM musicals and later played the mysterious host in the long-running 1970s TV series Fantasy Island, died this morning at his Los Angeles home. The cause of death hasn’t been announced. Montalban was 88.

Though never a major box office attraction, in the 1940s and early 1950s Ricardo Montalban (born in Mexico City on Nov. 25, 1920) played opposite some big names in lightweight fare such as Fiesta, On an Island with You, and Neptune’s Daughter, all starring Esther Williams (right); the charming Two Weeks with Love, with Jane Powell; Sombrero, with Pier Angeli; and the laughable Latin Lovers, in which the Mexican Montalban plays a Spanish-accented Brazilian wooing Lana Turner.

Additionally, Montalban’s fiery dancing with Cyd Charisse and Ann Miller is the highlight of the otherwise mundane The Kissing Bandit, starring Frank Sinatra and Kathryn Grayson.

Among Montalban’s more serious roles during that period were those in Anthony Mann’s crime drama Border Incident; William A. Wellman’s Oscar-nominated (and dreadful) Battleground, in which he freezes to death; and John Sturges’ watchable crime drama Mystery Street, playing a police investigator who teaches a lesson or two to some of the film’s WASP characters. Mystery Street received an Oscar nomination for best motion picture story in 1950.

Among his more recent film appearances – as in, in the last 50 years – were supporting roles in Sayonara, Cheyenne Autumn, Madame X, The Singing Nun, the out-there campy villain in Star Trek II: The Wrath of Khan, and Spy Kids 3-D: Game Over.

Despite his extensive film career, Montalban is best remembered for his Mr. Roarke, the white-suited gentleman with long sideburns who makes sure that each visitor to Fantasy Island – often movie stars of yore – achieve their dream (or nightmare, as the case might be). The show, which co-starred Herve Villechaize, ran from 1978 to 1984. Among the featured guests were MGM alumni Jane Powell, Cyd Charisse, Peter Lawford, and Anne Francis.

Montalban also guested in loads of TV shows, from Dr. Kildare to Family Guy, and appeared on stage, starring opposite Lena Horne on Broadway in the 1957 musical Jamaica, for which he was nominated for a Tony. He also toured in George Bernard Shaw’s Don Juan in Hell and in The King and I.

In his autobiography, Reflections: A Life in Two Worlds, Montalban discusses prejudice he encountered both in Mexico (his Spanish immigrant parents had different customs from the locals) and in the US (seeing a sign on a Texan diner, “No Dogs or Mexicans Allowed”). In the 1970s, he helped to found Nosotros (the title of a 1945 Mexican melodrama in which he had starred), an organization whose aim is to promote non-biased portrayals of people of Spanish-speaking origin in Hollywood films.

He was married to Georgiana Young, a younger sister of Loretta Young. She died in November 2007.

Ricardo Montalban was very impressing and attrackting as AMAL the warrior in the movie QUEEN of BABYLON co-starring Rhonda Fleming..He was handsome viril and very sexy ,. RIP senor Montalban.We ll always miss you