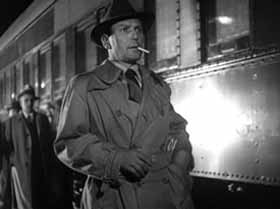 Versatile Hollywood director Richard Fleischer, at his best handling action films and suspense thrillers, died yesterday of “natural causes” at the Motion Picture and Television Hospital in the Los Angeles suburb of Woodland Hills. He was 89.

Six years later, he had a career breakthrough with two well-received productions: the cheaply made suspense thriller The Narrow Margin, starring Charles McGraw as a cop protecting a trial witness aboard a Los Angeles-bound train, and the nostalgia-filled The Happy Time, starring Charles Boyer, Louis Jourdan, Marsha Hunt, and Bobby Driscoll as members of a Canadian family in the 1920s.

Made for Walt Disney in 1954, 20,000 Leagues Under the Sea became a gigantic box office hit that solidified Fleischer’s standing in the industry. He directed several of his best-known films in the years that followed, including the crime drama Violent Saturday (1955), starring Victor Mature and Richard Egan; the rousing 1958 adventure epic The Vikings (which reteamed the director with one of his 20,000 Leagues stars, Kirk Douglas); and Compulsion (1959), a fictionalized account of the Leopold-Loeb murder case, with Dean Stockwell, Bradford Dillman, Orson Welles, and Diane Varsi.

Fleischer’s career faltered in the 1960s, though he did come up with one major hit in mid-decade: the 1966 science-fiction thriller Fantastic Voyage – in which Raquel Welch, Stephen Boyd, and others fight white cells and each other while traveling inside the human body. The director’s professional resurgence, however, proved short-lived. The following year Fleischer was responsible for one of the biggest box office misfires of the decade, the bloated Rex Harrison vehicle Doctor Dolittle.

From then on, except for three psychological suspense thrillers, The Boston Strangler (1968), 10 Rillington Place (1970), and Blind Terror (1971), Fleischer lost both his director’s touch and his box office appeal. The first two films provided, respectively, Tony Curtis and Richard Attenborough the chance to play psychopathic murderers to good advantage, while the third gave Mia Farrow a good role as a blind potential murder victim, offering a climax that fully justified the title.

Fleischer’s other later films were almost invariably critical and commercial disappointments – or, in the cases of Che! and Tora! Tora! Tora!, downright box office disasters. In the 1980s, two Arnold Schwarzenegger vehicles – Conan the Destroyer (1984) and Red Sonja (1985) – gave a much-needed box office boost to the director’s dwindling career, but those films could hardly be called classics of their kind.

His autobiography was published in 1993. In the book, Fleischer remarked that Kirk Douglas was “very, very difficult,” while Rex Harrison was worthy of “a swift kick in the head.”

The director’s father, Max Fleischer, and his uncles Dave and Louis, were the creators of the 1920s animated short series Out of the Inkwell. In the 1930s, they produced the Betty Boop and Popeye the Sailor comedy shorts.