Ricky Martin, best known for the song “Livin’ la Vida Loca,", has announced that he is a “fortunate homosexual.” Martin pretty much just confirmed what everyone knew or at least strongly suspected. In any case, to come out openly takes more guts than most people think.

The Puerto-Rican-born Martin has appeared in several soaps, but he’s never had anything even remotely resembling a film career. His only feature-film appearance to date has been a supporting role in Juan Antonio de la Riva’s 1992 Mexican-made feature Más que alcanzar una estrella.

Coincidentally, in an interview with the Toronto Star this month, Barbara Walters said that of her 93 interviews with A-list stars she only regretted one: “In 2000, I pushed Ricky Martin very hard to admit if he was gay or not, and the way he refused to do it made everyone decide that he was. A lot of people say that destroyed his career, and when I think back on it now I feel it was an inappropriate question.”

Perhaps that Walters interview did indeed “destroy” Martin’s career. But perhaps those “a lot of people” are giving too much importance to the power of Walters’ celebrity tête-à-têtes. Really, by the year 2000 Ricky Martin’s sexual orientation was already old – if unofficial – news.

Below is Ricky Martin’s full statement, released on his official website. His twin sons were born in 2008 to a surrogate mother.

A few months ago I decided to write my memoirs, a project I knew was going to bring me closer to an amazing turning point in my life. From the moment I wrote the first phrase I was sure the book was the tool that was going to help me free myself from things I was carrying within me for a long time. Things that were too heavy for me to keep inside. Writing this account of my life, I got very close to my truth. And this is something worth celebrating.

For many years, there has been only one place where I am in touch with my emotions fearlessly and that’s the stage. Being on stage fills my soul in many ways, almost completely. It’s my vice. The music, the lights and the roar of the audience are elements that make me feel capable of anything. This rush of adrenaline is incredibly addictive. I don’t ever want to stop feeling these emotions. But it is serenity that brings me to where I’m at right now. An amazing emotional place of comprehension, reflection and enlightenment. At this moment I’m feeling the same freedom I usually feel only on stage, without a doubt, I need to share.

Many people told me: “Ricky it’s not important", “it’s not worth it", “all the years you’ve worked and everything you’ve built will collapse", “many people in the world are not ready to accept your truth, your reality, your nature". Because all this advice came from people who I love dearly, I decided to move on with my life not sharing with the world my entire truth. Allowing myself to be seduced by fear and insecurity became a self-fulfilling prophecy of sabotage. Today I take full responsibility for my decisions and my actions.

If someone asked me today, “Ricky, what are you afraid of?” I would answer “the blood that runs through the streets of countries at war…child slavery, terrorism…the cynicism of some people in positions of power, the misinterpretation of faith.” But fear of my truth? Not at all! On the contrary, It fills me with strength and courage. This is just what I need especially now that I am the father of two beautiful boys that are so full of light and who with their outlook teach me new things every day. To keep living as I did up until today would be to indirectly diminish the glow that my kids where born with. Enough is enough. This has to change. This was not supposed to happen 5 or 10 years ago, it is supposed to happen now. Today is my day, this is my time, and this is my moment.

These years in silence and reflection made me stronger and reminded me that acceptance has to come from within and that this kind of truth gives me the power to conquer emotions I didn’t even know existed.

What will happen from now on? It doesn’t matter. I can only focus on what’s happening to me in this moment. The word “happiness” takes on a new meaning for me as of today. It has been a very intense process. Every word that I write in this letter is born out of love, acceptance, detachment and real contentment. Writing this is a solid step towards my inner peace and vital part of my evolution.

I am proud to say that I am a fortunate homosexual man. I am very blessed to be who I am. 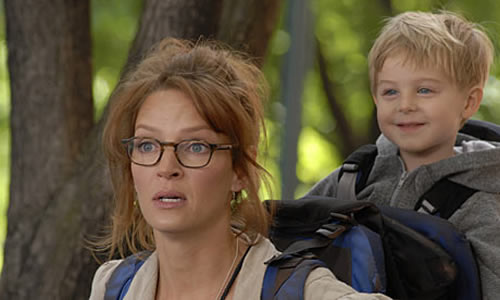 From suffering through the trials of Motherhood (above) to being one of Robert Pattinson’s lovers in Bel Ami, currently being filmed in Europe. That’s Uma Thurman’s recent fate, and it’s actually even better than it sounds.

After all, Motherhood, a $5 million semi-autobiographical comedy written and directed by Katherine Dieckmann, made only $93,388 at the North American box office last fall according to Box Office Mojo.

It gets worse. In early March, Motherhood opened at one theater in the UK where it made £88 – or US$131 – on its debut weekend. On Sunday, the film took in a grand total of £9, which means one person went to see it.

“The reviews were very poor indeed but that alone isn’t enough to explain this,” says film critic Barry Norman. “It’s a reasonable assumption that there was a marketing and advertising catastrophe, and people didn’t know it was showing. But it should have attracted more than 11 people in passing trade alone. Apollo cinemas, after all, aren’t in tucked-away places. They’re all prominently located. I’m baffled.”

According to Amelia Hill’s The Guardian report on Motherhood‘s box office nonperformance, that isn’t a record low for British cinemas. The Polish drama My Nikifor earned a total of £7 on its first weekend three years ago.

Also in the Motherhood cast: Minnie Driver, Anthony Edwards, and Jodie Foster in a cameo.

Box Office Mojo shows the film has grossed $608K at the international box office, but only five countries are included on the chart: Spain ($353K), Mexico ($188K), Brazil ($67K), Russia ($18K), and Singapore ($4K). If the film performs elsewhere the way it did in Spain, or even Mexico or Brazil, it may eventually recover its production cost.

And who knows, considering all the publicity it has been getting of late, perhaps Motherhood will become a cult hit on the domestic home video market.

Be forewarned: If you pick Haneke’s bleak drama, you may be the only one doing so. Remember: These are the MTV Movie Awards.

Viewers can submit their choices for the nominees in the MTV Movie Awards’ 13 categories, including best villain, best fight and best kiss – but, sadly, not best sex scene, best deadly shoot-out, or best ideological undercurrent.

Three new categories this year are Best Global Superstar (open to voters all over the world), Best Scared-As-Shit (spelled S**t) Performance (my vote: any of the chipmunks in The Squeakquel), and Best Ass Kicking Star (my vote: Meryl Streep in Julie & Julia).

Submissions will be accepted until April 9.

The 19th annual MTV Movie Awards will be presented June 6 at the Gibson Amphitheatre in Universal City, north of downtown Los Angeles. Voting for the best movie will remain open throughout the live telecast.

well i voted for kristen srewart !!!!S reply if u did also