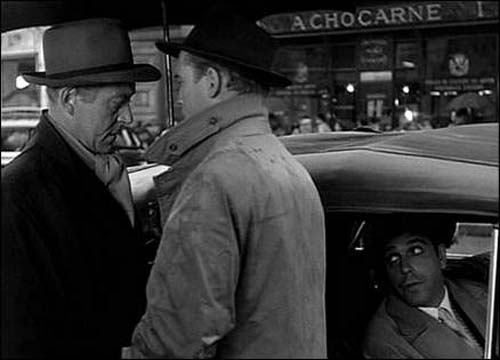 The easiest, most obvious point to start with any thoughts on Jules Dassin’s Rififi is the thirty-minute heist that comprises its middle third. Without dialogue, the sequence unfolds with a complexity deceptive in its economy. Even if a viewer has watched similar set-ups in subsequent films, the precision in these scenes is thrilling. Dassin orchestrates the action in a manner that is “inclusive of audience,” but promotes uneasiness with his wicked use of composition and transition (among other aesthetic attributes).

The stillness of a wide shot of the four hoods crouched above a crawl hole cuts to a low-angle shot of that hole from below that plays with light and dark. The spatial order in every shot is constantly challenged with subtle framing devices or a slight lack of asymmetrical balance in the mise en scène. Movement is viewed from around and above and below.

The gang itself remains mostly calm, but the real suspense is suggested all around them in the director’s approach. The technical and artistic conceptualization of the heist sequence manifests itself again in the final minutes of the film, accelerated and magnified to a degree as priorly suggested uncertainties suddenly erupt.

In Rififi, Tony Stephanois (the fantastic Jean Servais) is a recently released criminal who agrees to join a small burglary planned by his protégée Jo the Swede (Carl Möhner) and fellow hood Mario (Robert Manuel). Tony is at first reluctant. Upon discovery of his girlfriend’s infidelity, however, he is spurned. Impulsively, he joins the group and concocts a more elaborate heist. Cesar (Dassin), an Italian safe-cracking expert, is enlisted. The stakeout and set-up is presented in motifs that build toward the visual instability found later in the film.

Of the gang, only Tony has little to lose. Dassin emphasizes this in a short, dark but lovely sequence that precedes the heist. Jo, Mario, and Cesar each leave their respective women (lovers who leave much unsaid) in “tranquility” rife with sadness and foreboding. Even as these relationships function under the weight of misogyny, there is an uneasy tenderness in the brief scenes that Dassin destroys in the next moment: the lone Tony seen from a low angle, shot night-for-night and backlit with a flood of exterior lights. In this harsh interlude, Tony’s fate is abruptly revealed.

The post-heist narrative unfolds predictably to modern audiences, but that does not prepare the viewer for the unsettling final scenes of a desperate Tony.

Rififi is one of the very best non-American films noir, with almost every visual and existential element of that non-genre integrated into its core. In fact, it is truly one of the best films of the 1950s. The layers that Dassin works into the narrative are even more rewarding in subsequent viewings.