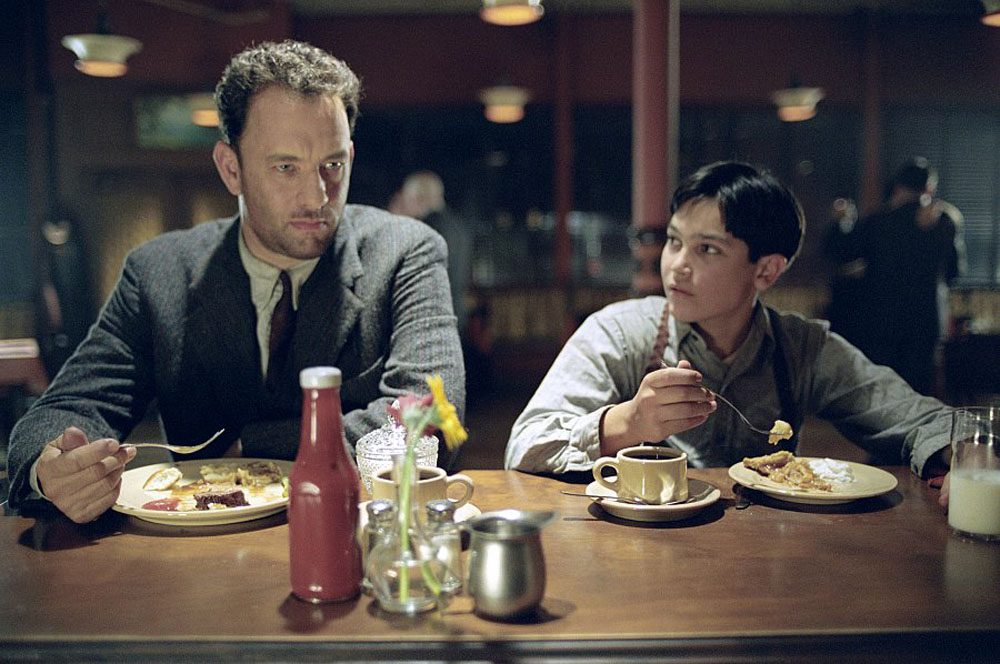 Road to Perdition with Tom Hanks and Tyler Hoechlin.

British director Sam Mendes won an Academy Award for his first film, American Beauty, released in 1999. His second film, Road to Perdition, came out three years later. Mendes once again relied on the assistance of cinematographer Conrad L. Hall and composer Thomas Newman to create another stylized look at dysfunctional American families. But instead of late 20th-century suburbia, Road to Perdition throws us into the warped universe of a Depression-era, all-American Midwestern town; a place where family values include faith, loyalty, extortion, and murder.

Road to Perdition begins as a teenager reminisces about the winter of 1931, a time when he and his father were on the run from a hired killer and assorted gangsters.

Things had been better earlier, when Michael Sullivan (a stolid-faced Tom Hanks as an Angel of Death figure) worked as a hitman for Irish mafia boss John Rooney (Paul Newman). Sullivan, in fact, had been raised by Rooney and loved the old man as if he were his own father. But it all changed for the worse after 12-year-old Michael Sullivan Jr. (Tyler Hoechlin) sneaked into his father’s car and witnessed Rooney’s biological son, Connor (Daniel Craig), kill a man at point blank. The psychopathic Connor decides to get rid of the young witness, but ends up killing the boy’s mother and younger brother instead.

More murders ensue as the bereaved Sullivan becomes obsessed with extracting revenge. All the while, he must keep running one step ahead of a bloodthirsty photographer (an appropriately creepy Jude Law) while dealing with the organized crime bosses – good capitalists all, eager to protect the stability of their business.

Considering all the spilled family blood, Road to Perdition – inspired by the lives of organized crime boss John Looney and his son – has the makings of a great modern tragedy, a promise that goes unfulfilled because of a screenplay filled with plot holes (e.g., Connor doesn’t know – nor does he apparently care about – which Sullivan boy he murders) and clichés (e.g., farm life is good; urban life is evil).

On the positive side, Mendes and Hall (who received a posthumous Academy Award for his work on this film) do create some brilliant atmospheric shots, such as a dreamlike massacre on a rainy night that is as powerful as it is unrealistic. As a plus, the film’s period reconstruction is for the most part quite impressive. (The phony speakeasy-cum-bordello sequence is a glaring exception.)

On top of that, Road to Perdition offers what may well be Paul Newman’s greatest performance. Had the other actors been given as many good lines as Newman – “Natural law. Sons are put on this earth to trouble their fathers” – and extracted as much out of them as Newman does, this average thriller would have gotten considerably closer to the great tragedy it aims to be.

‘Skyfall’: Most Successful James Bond Movie Ever Made?