On Aug. 12, Turner Classic Movies’ “Summer Under the Stars” series is highlighting the career of Robert Mitchum. Two of the films being shown this evening are The Yakuza and Ryan’s Daughter. The former is one of the disappointingly few TCM premieres this month. (See TCM’s Robert Mitchum movie schedule further below.)

Despite his film noir background, Robert Mitchum was a somewhat unusual choice to star in The Yakuza (1975), a crime thriller set in the Japanese underworld. Ryan’s Daughter or no, Mitchum hadn’t been a box office draw in quite some time; in the mid-1970s, one would have expected a Warner Bros. release directed by Sydney Pollack – who had recently handled the likes of Jane Fonda, Barbra Streisand, and Robert Redford – to star someone like Jack Nicholson or Al Pacino or Dustin Hoffman. But Robert Mitchum it was.

In fact, as found in Lee Server’s Robert Mitchum: “Baby, I Don’t Care,” Mitchum – with director approval – was cast after Lee Marvin turned down the role and before Pollack was hired. Robert Aldrich was supposed to handle the proceedings (he and Marvin had worked together on The Dirty Dozen), but Mitchum nixed the idea.* He selected the Jeremiah Johnson and The Way We Were director instead.

Four-time Japanese Academy Award winner Ken Takakura, who has been described as the Japanese Humphrey Bogart, was Mitchum’s co-star, while Eiji Okada, Emmanuelle Riva’s romantic interest in Alain Resnais’ Hiroshima Mon Amour (1959) and the star of Hiroshi Teshigahara’s Woman in the Dunes (1964), landed a supporting role.

As mentioned in the Mitchum biography, upon his arrival in Japan in January 1974 the Hollywood star held a small press conference during which he told local journalists, “Remember Pearl Harbor.”

It’s unclear whether the Japanese journalists found that humorous or if they replied back, “Remember Hiroshima and Nagasaki.” (Seventy years ago earlier this month.)

Mitchum also threw tantrums during the shoot – “I want out. I really want out. Perhaps the only way they will believe me is if I pack my bags and get out of here tomorrow. … Greta Garbo did it. …” – and had to deal with autograph hunters calling him “Kirk Douglas-san.”†

With a screenplay by Paul Schrader (Taxi Driver) and Yakuza-experienced Leonard Schrader (Kiss of the Spider Woman), later revised by credited co-screenwriter Robert Towne (Chinatown), The Yakuza should have been if not a box office hit, then at least a critically acclaimed effort.

At the time of its release, Pollack’s film was neither. In later years, The Yakuza has developed a cult following, though it remains little known outside the circle of gangster film aficionados.

About working with Robert Mitchum, Sydney Pollack would later say: “I found him to be like a very, very powerful and lazy horse. He wants to walk as slow as possible and get away with doing as little as possible. You used to really have to push him. He won’t offer the full emotional nature of a performance, at least he didn’t for me, until you went after him a little bit.”

* According to several online sources (I was unable to trace their original source), Robert Mitchum didn’t want to work with Robert Aldrich again, as he remembered his experience with the director during the making of The Angry Hills (1959). Besides The Dirty Dozen, Aldrich is best known for the Bette Davis-Joan Crawford star vehicle What Ever Happened to Baby Jane?.

† Robert Mitchum and Sydney Pollack quotes, “Kirk Douglas-san” via Robert Mitchum: “Baby, I Don’t Care.” Server’s sources for these two particular bits of information aren’t explicitly divulged in the book, but in that segment he quotes extensively The Yakuza assistant director Michael Moore. 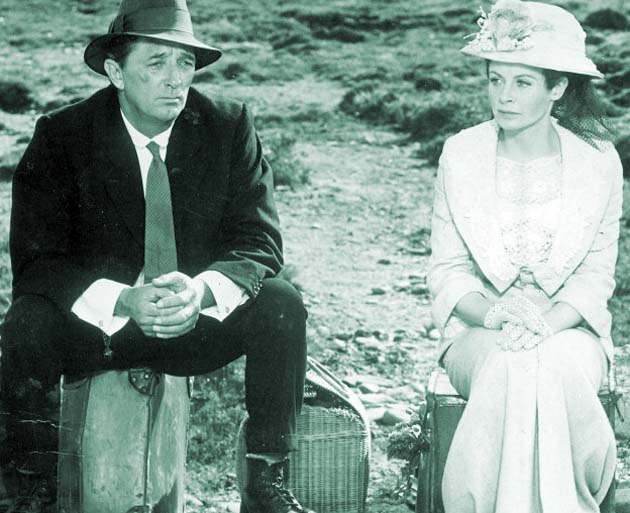 Back in the 1940s and early 1950s, David Lean was known for several first-rate intimate dramas – e.g., This Happy Breed, Brief Encounter, The Passionate Friends, Hobson’s Choice – featuring top-notch performances by the likes of Ann Todd (Lean’s wife from 1949-1957), Celia Johnson, Claude Rains, Charles Laughton, and John Mills. What a difference a multiple Oscar winner like The Bridge on the River Kwai (1957) makes.

Following that hugely successful, big-budget Anglo-American release, Lean never looked back. First, there was the even more mammoth Lawrence of Arabia (1962) and then the leviathanesque Doctor Zhivago (1965); both were enormous international hits.

Next in line was an intimate drama – a Madame Bovary reboot written by Robert Bolt (Lawrence of Arabia, A Man for All Seasons) – filmed as if it were another bloated epic: Ryan’s Daughter (1970).

Lean’s ham-fisted approach and the film’s inordinate length are both major handicaps to the delicate, complex story about love, betrayal, and social pressure in British-occupied Ireland at the time of World War I. Admittedly, these issues were hardly new in a David Lean film as they had also plagued Doctor Zhivago and, to a lesser extent, Lawrence of Arabia – both of which earned multiple Academy Award nominations, including Best Picture and Best Director. Lawrence of Arabia, in fact, came out on top in both categories in addition to five others, and is considered by many one of the greatest movies ever made.

Ryan’s Daughter, for its part, is saved from a fate worse than death by a solid second half and a first-rate cast:

Christopher Jones looks the part of the handsome British officer (written for Marlon Brando), but apparently didn’t sound it; his voice was dubbed by Stanley Holloway’s son, Julian Holloway – who possibly would have had to dub Brando as well.

In later years, Jones blamed his less than effective performance on his personal life, claiming he was having an affair with Sharon Tate, who was going to leave Roman Polanski for him. Tate was murdered in Aug. 1969, while Ryan’s Daughter was in production.

Although a box office success in the U.K. and the U.S., the costly Ryan’s Daughter had a tough time earning its money back. The film won only two Oscars: John Mills’ and Best Cinematography for Freddie Young.

Besides Sarah Miles’, its only other nomination was for Best Sound.

David Lean’s last six films earned him five Best Director Academy Award nominations. Two of these resulted in victories: The Bridge on the River Kwai, Lawrence of Arabia. The one movie for which Lean was bypassed by the Academy’s Directors Branch? Ryan’s Daughter.

The five nominees that year, by the way, were a mix of traditional and unconventional filmmakers:

For the record, David Lean’s three other latter-career Best Director Oscar nominations were for the aforementioned Doctor Zhivago, Summertime (1955), and, my favorite among his psychological epics, A Passage to India (1984).

Lean had been previously nominated in that category for Brief Encounter (1946) and Great Expectations (1947). 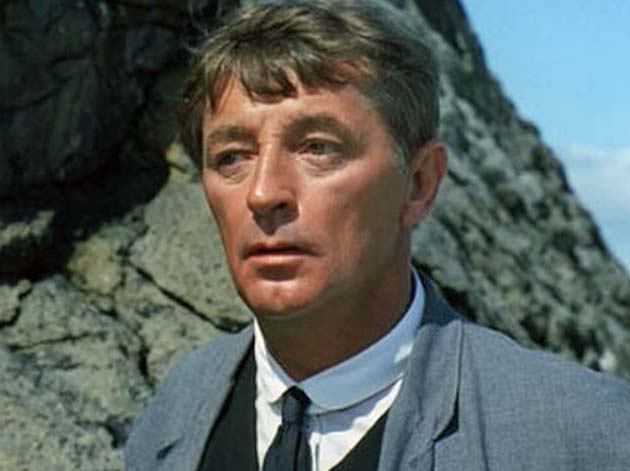