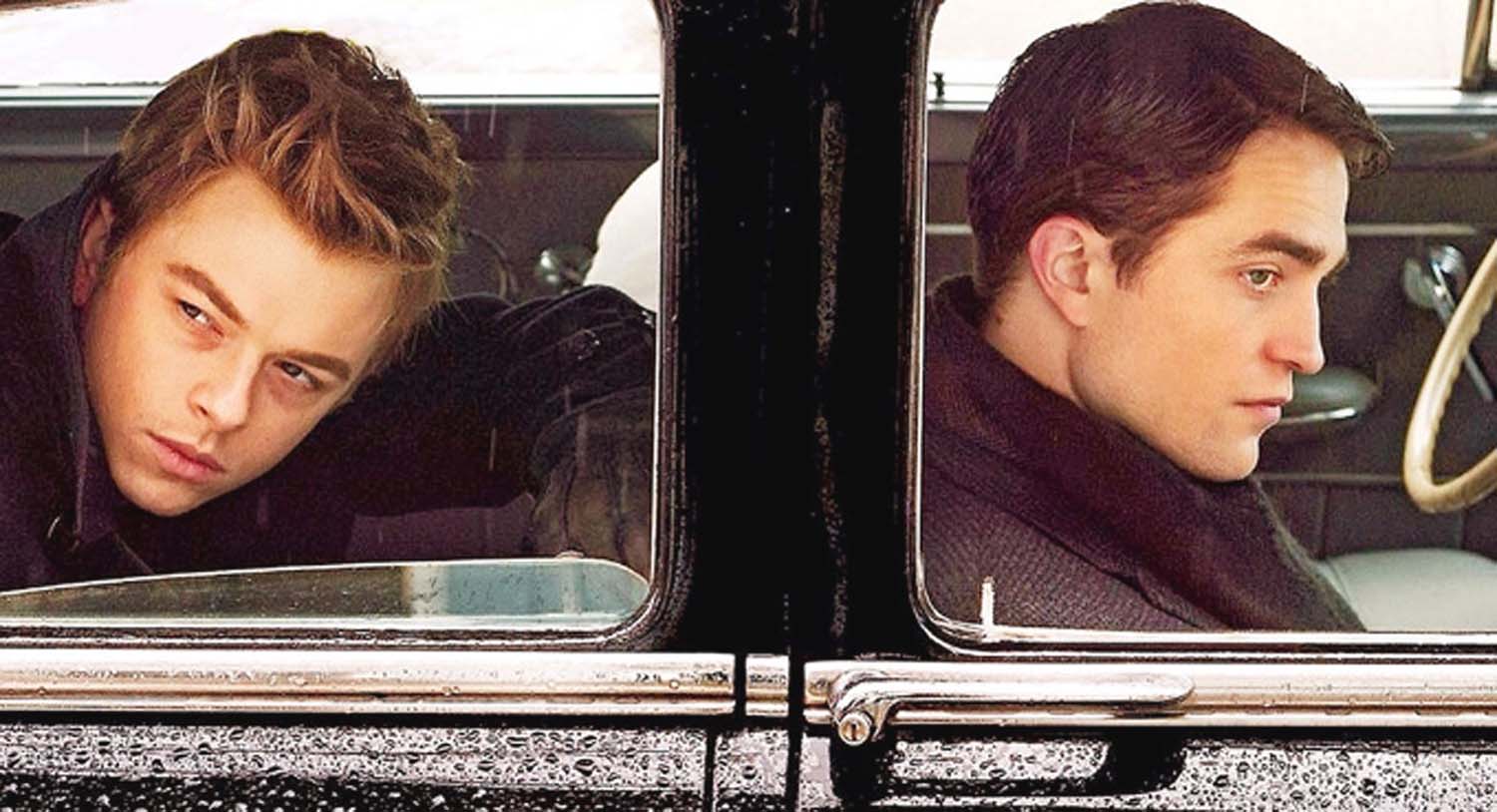 Robert Pattinson and Mission: Blacklist have parted ways. Pattinson, whose name had been attached to the project for two years – since Cannes 2012 – has reportedly dropped out due to scheduling issues. Now, what could those issues be?

Well, Robert Pattinson, best known (at least for the time being) as the vampire Edward Cullen in the immensely popular Twilight movie franchise, has no less than two movies opening at Cannes 2014: David Michôd’s thriller The Rover, co-starring Guy Pearce, which will be shown as one of Cannes’ Midnight Screenings, and David Cronenberg’s Maps to the Stars, also featuring Julianne Moore, John Cusack, Mia Wasikowska, and Carrie Fisher, and which is in the running for the Palme d’Or.

There’s still more: As per the IMDb, Robert Pattinson has his name attached to James Gray’s The Lost City of Z, also starring Benedict Cumberbatch; in addition to the James Marsh thriller Hold On to Me, opposite Carey Mulligan, and Brady Corbet’s The Childhood of a Leader, also to (potentially) feature Juliette Binoche and Tim Roth.

Robert Pattinson: Not enough time to prepare for ‘Mission: Blacklist’

According to TheWrap, citing an unnamed source “familiar with the situation,” Pattinson didn’t have enough time to get ready “for his demanding role” in Mission: Blacklist. He was to star as U.S. military interrogator Eric Maddox, whose work reportedly led to the capture of Saddam Hussein in the aftermath of the invasion of Iraq.

Director Jesper Ganslandt (Falkenberg Farewell, Blondie), who replaced Jean-Stéphane Sauvaire, remains attached to Mission: Blacklist. The thriller has a screenplay by Erik Jendresen, Dylan Kussman, and Trace Sheehan, based on Maddox and Davin Seay’s book Mission: Black List #1: The Inside Story of the Search for Saddam Hussein – As Told by the Soldier Who Masterminded His Capture. The Mission: Blacklist producers are Jendresen, Kevin Waller, Ross Dinerstein, and Code Entertainment’s Bart Rosenblatt.

The filmmakers reportedly hope to start production this fall, with another actor replacing Robert Pattinson – and, obviously, another set of eyes for the film’s poster.

Believe it or not, Robert Pattinson has been making movies for about a decade. Pattinson’s film credits include a small role in Mira Nair’s Vanity Fair (2004), starring Reese Witherspoon as Becky Sharp; the role of Cedric Diggory in Mike Newell’s Harry Potter and the Goblet of Fire (2005), starring Daniel Radcliffe; and, gasp!, playing a gay Salvador Dalí opposite Javier Beltrán as Federico García Lorca and Matthew McNulty as Luis Buñuel in Paul Morrison’s Little Ashes (2008).

Robert Pattinson in The Rover.

The Rover, David Michôd’s futuristic, Australian Outback-set thriller that will premiere at the 2014 Cannes Film Festival (Midnight Screenings), has a new trailer. Guy Pearce and Robert Pattinson star in this dark tale about a middle-aged man, Eric (Pearce), hunting down the members of a gang who have stolen his last and most prized possession: his beat-up car. Pattinson, best known as the sparkling vampire Edward Cullen in the Twilight film series, plays a (now) former member of the gang, Rey – left behind to die after he’s seriously injured in a fight. See The Rover trailer below.

The youthful Rey, in fact, is unlike the other gang members. “If you don’t learn to fight,” Eric warns him in a hard-to-understand mumble, “your death’s gonna come real soon.” Not too soon, as Robert Pattinson – a likable and vastly underrated actor who’ll hopefully be able to fully demonstrate his talent here – is one of the film’s two leads. Wanna bet he learns to fight – or at least pull the trigger at the appropriate moment? And will a father-(surrogate) son bond ensue?

And finally, watching The Rover trailer we learn that, as “the center cannot hold, anarchy is loosed upon the world.” Proof positive that humankind’s near future will remain just as bloodily chaotic as its present and its past.

Written and directed by David Michôd, whose crime drama Animal Kingdom earned Jacki Weaver a Best Supporting Actress Academy Award nomination, The Rover is based on a story by Michôd and Animal Kingdom co-star Joel Edgerton (also recently seen in the Leonardo DiCaprio version of The Great Gatsby).

Robert Pattinson, I should add, has another film at Cannes 2014: David Cronenberg’s Maps to the Stars, the second Cronenberg-Pattinson collaboration to be included in Cannes’ Official Competition for the Palme d’Or – following Cosmopolis, two years ago. Besides Pattinson, Maps to the Stars features John Cusack, Julianne Moore, Mia Wasikowska, Carrie Fisher, Sarah Gadon, and Olivia Williams.

The Rover opens in France on June 4. It’ll debut in New York City and Los Angeles on June 13; in the United States, it gets a wider release on June 20. If the IMDb information is accurate, The Rover also opens in The Netherlands and Denmark in June, and in the United Kingdom on August 22.

Star Wars: Episode VII cast members have been announced. The world had been waiting with bated breath. Who will The Force be with?

Well, not with humankind and its fellow Earth dwellers (apart from cockroaches and various types of worms) – if news reports about the eventual fate of the planet are accurate. But don’t despair. The End credits for Planet Earth should come after Lucasfilm and Walt Disney Studios (instead of former Star Wars film distributor 20th Century Fox) amass a few more billion dollars following the release of a whole array of new Star Wars sequels in the coming years.

I mean, Max von Sydow, as in the guy who starred for Ingmar Bergman in The Seventh Seal, The Virgin Spring, Through a Glass Darkly, Hour of the Wolf, Shame, and The Passion of Anna? A name that’s meaningless to the vast majority of Star Wars fans, but who means Cinema (capital “C”) to non-braindead film lovers everywhere? That’s the one and only Max von Sydow, 85 years old last April 10, and a two-time Academy Award nominee (for Bille August’s Pelle the Conqueror, which also earned him a Best Actor European Film Award, and Stephen Daldry’s Extremely Loud & Incredibly Close).

By the way, Max von Sydow’s credits also include commercial Hollywood stuff like William Friedkin’s The Exorcist, Dino De Laurentii’s box office misfire Flash Gordon, the Steven Spielberg-Tom Cruise collaboration Minority Report, and even the Sylvester Stallone sci-fier Judge Dredd. Come to think of it, von Sydow even got to play Jesus in George Stevens’ all-star The Greatest Story Ever Told back in the mid-’60s, and around that time co-starred with Julie Andrews in George Roy Hill’s Hawaii. In the ’80s, he was directed by Woody Allen in Hannah and Her Sisters and was featured in David Lynch’s Dune.

In fact, Max von Sydow has been around for more than six decades, making movies in just about every corner of the globe, not to mention a handful of other planets as well. Now, it’s time for him to move on to other galaxies far, far away.

At this stage, it’s unclear who will be playing which role. Anyhow, the new Star Wars: Episode VII cast members will be joining Star Wars veterans Harrison Ford, Mark Hamill, and Carrie Fisher (to be seen at the 2014 Cannes Film Festival in a supporting role in David Cronenberg’s Maps to the Stars, starring Robert Pattinson, John Cusack, Mia Wasikowska, and Julianne Moore).

Also returning are Peter Mayhew and Kenny Baker as, respectively, Chewbacca and RD-D2.

Disney, which acquired Lucasfilm in 2012, will release Star Wars: Episode VII in December 2015. This particular Star Wars sequel will be set three decades after Return of the Jedi, which was released 31 years ago. George Lucas directed the original Star Wars (1977), which became one of the biggest blockbusters in history (adjusted for inflation, it’s supposed to trail only Victor Fleming’s Gone with the Wind). Irvin Kershner directed the sequel, The Empire Strikes Back (1980), followed by Richard Marquand’s unenthusiastically received Return of the Jedi (1983).

Also returning for Star Wars: Episode VII will be 82-year-old composer John Williams, who scored the first three Star Wars movies and acted as music conductor in the three prequels.

How to Train Your Dragon Review: DreamWorks Hits Stride That Works

I know Rob has a busy schedule I was looking forward in seeing him in mission blacklist. So sad to see him leave.