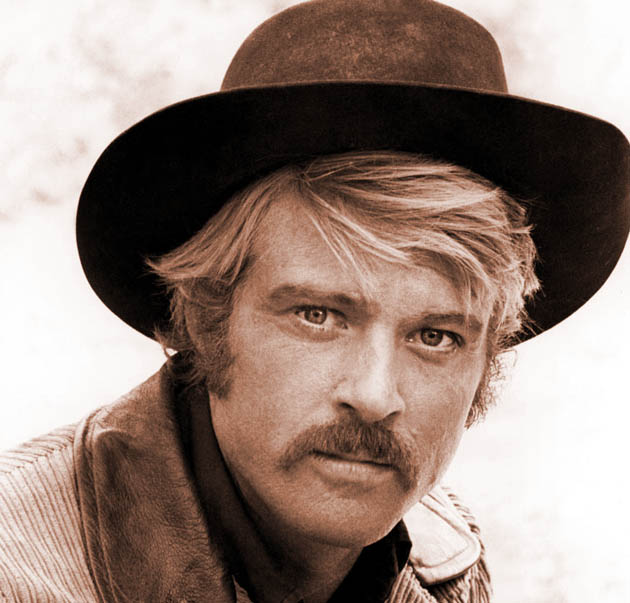 They don’t make movie stars like they used to, back in the days of Louis B. Mayer, Jack Warner, and Harry Cohn. That’s what nostalgists have been bitching about for the last four or five decades; never mind the fact that movie stars have remained as big as ever despite the demise of the old studio system and the spectacular rise of television more than sixty years ago. This month of January 2015, Turner Classic Movies will be honoring one such post-studio era superstar: Robert Redford.

Beginning tonight, Jan. 6, TCM will be presenting 15 Robert Redford movies. Entries include one of his early efforts (discussed further below), and his two biggest blockbusters, both directed by George Roy Hill and co-starring Paul Newman:

Butch Cassidy and the Sundance Kid stars Paul Newman and Robert Redford (the latter in a role originally offered to Warren Beatty) as the two legendary Old West outlaws, here turned into lovable, humorous 1960s-ish antiheroes who meet a loveless, mirthless ending in Bolivia, of all places.

Katharine Ross, fresh off of her Best Supporting Actress Oscar nomination for Mike Nichols’ blockbuster The Graduate (1967), is the beautiful woman-between – quite literally, one imagines, when Hill’s camera isn’t looking (Butch Cassidy and the Sundance Kid is Family Friendly Fare) – while Burt Bacharach and Hal David came up with one of the corniest songs ever written for a Western this side of Roy Rogers’ My Pal Trigger and Gene Autry’s Down Mexico Way. Sung by B.J. Thomas, “Raindrops Keep Fallin’ on My Head” became enormously popular the world over and won that year’s Best Original Song Oscar to boot. 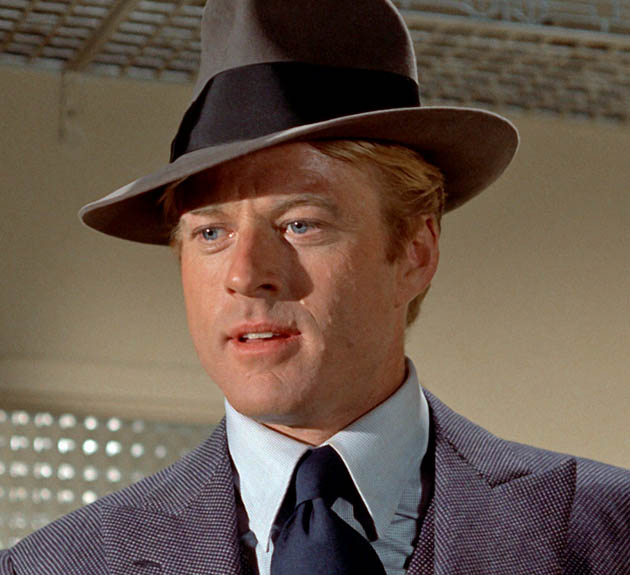 Robert Redford in ‘The Sting.’

‘The Sting’: The return of New Hollywood’s favorite screen couple

Set in the early ’30s, Universal Pictures’ The Sting (1973) stars Paul Newman and Robert Redford as con men attempting to con another con man (Robert Shaw). Those expecting a reboot of Warner Bros.’ witty, raunchy, socially conscious comedies of that era were (or will be) sorely disappointed. Those expecting an elaborate light comedy with unexpected (and not-so-unexpected) twists and turns may enjoy the ride.

Millions did just that, as The Sting remains one of the biggest box office hits in film history. Besides, it won seven Academy Awards, including Best Picture and Best Director, in addition to earning Redford his sole Best Actor nomination to date.[1]

And people keep whining about the Academy being “out of touch.” If only.

Reportedly the first Western to compete for a Palme d’Or at the Cannes Film Festival, Sydney Pollack’s low-budget, mid-19th-century-set Jeremiah Johnson (1972) stars Robert Redford in the title role: a Mexican War veteran who decides to leave the past behind by becoming a mountain man in Colorado’s Rocky Mountains. Problems with local Crow Indians ensue.

As proof of Redford’s powerhouse box office appeal, Jeremiah Johnson – which was to have starred either Lee Marvin or Clint Eastwood (who didn’t get along with initially assigned director Sam Peckinpah) – grossed an astonishing $44.69 million (or about $252 million today) in the U.S. and Canada. ($21 million in domestic rentals – the studio’s share of the gross – as found in Randy Roberts’ John Wayne: American.)

John Milius, whose screenwriting credits range from Francis Ford Coppola’s widely revered Vietnam War drama Apocalypse Now (1979) to the nativist right-wing embarrassment Red Dawn (1984), was credited alongside veteran Edward Anhalt for the Jeremiah Johnson screenplay. Their tale is partly based on the life of U.S. Navy deserter John Garrison a.k.a. John Johnston (1824–1900), who lived in the Rocky Mountains of Wyoming and Montana, and, according to legend, after eating the organs of hundreds of Crow Indians he killed (hence his nickname, “Liver Eatin’ Johnston”), ended up dying totally broke in the Los Angeles area (at the Old Soldier’s Home in the Sawtelle district, between Brentwood and Westwood).

‘War Hunt’: What’s the difference between a deadly war hero and a psychopathic serial killer?

In the Stanford Whitmore-written film, John Saxon plays a U.S. private who helps the American cause by infiltrating enemy lines and proceeding to stab his opponents to death – with the tacit support of his commander (Charles Aidman). And that begs the question: What differentiates medal-winning war heroes – those honored for killing as many enemy soldiers as possible – from bloodthirsty mass murderers and/or serial killers? It goes without saying that the Pentagon refused to collaborate with the filmmakers.

“One of the most original and haunting war movies in years” in the words of the New York Times’ Bosley Crowther, War Hunt was one of the National Board of Review’s top ten films of 1962. The Sanders brothers’ psychological war drama is also notable for Francis Ford Coppola’s rumored participation as an extra (Coppola is supposed to have worked as a truck driver on the set) and, most importantly, for having introduced Robert Redford to minor actor and future Academy Award -winning filmmaker Sydney Pollack. 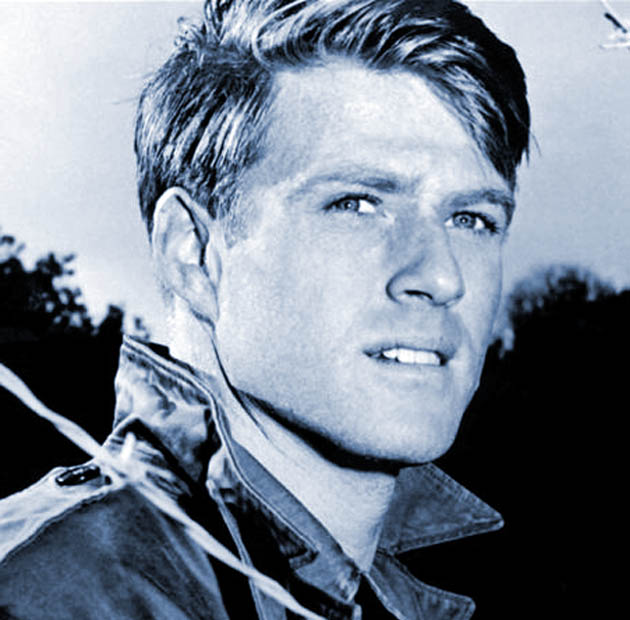 There would be seven Robert Redford-Sydney Pollack collaborations:

Besides Turner Classic Movies’ four Robert Redford movies this evening, viewers might want to check out Gordon Douglas’ The McConnell Story (1955), which sounds like a by-the-book Hooray for the Military biopic – based on the life and times of U.S. Air Force pilot Joseph C. McConnell, who did quite well for himself during the Korean War.

But whatever its flag-waving shortcomings, The McConnell Story does offer Alan Ladd and June Allyson – always a couple of good reasons to check out any movie – as McConnell and Wife. Also, Douglas’ film seems to share elements in common with Clint Eastwood’s potential awards-season contender American Sniper, starring Bradley Cooper as another U.S. Military Hero trying to adjust to civilian life. (American Sniper, however unintentionally, also has disturbing elements in common with War Hunt.)

There’s more: TCM will be showing the landmark box office hit Lights of New York, a 1928 crime drama whose sole claim to fame is the fact that this Warner Bros. release was the very first all-talking feature film ever made. Chorus girl Helene Costello,[2] small-town boy Cullen Landis, and big-city nightclub owner and bootlegger Wheeler Oakman – none of whom were major stars even back in those days – have the key roles.

Needless to say, time hasn’t been kind to Lights of New York; yet I find it considerably more enjoyable than its reputation would lead one to believe. Part of the credit goes to director Bryan Foy (back in the old vaudeville days, one of Eddie Foy’s “Seven Little Foys”), while veteran Gladys Brockwell all but steals the show in a supporting role as the bootlegger’s mistress.

And finally, Lights of New York will be followed by the Buster Keaton comedy Sidewalks of New York (1931), one of the comedian’s lesser-known talkies made at Metro-Goldwyn-Mayer. Anita Page, best known as one of the last silent-era survivors and for having been featured in the first talkie to win a Best Picture Academy Award (Harry Beaumont’s The Broadway Melody, 1928-29) is Keaton’s leading lady.

[1] Last year, Robert Redford got close to receiving his second Best Actor Oscar nod, thanks to the J.C. Chandor-directed one-man show All Is Lost; the Hollywood veteran, however, ended up nomination-less.

Despite his stellar presence, All Is Lost was apparently too small and too little-seen a movie to catch the attention of Academy of Motion Picture Arts and Sciences – and Screen Actors Guild Award – voters.

Connection to the early 21st century: Dolores Costello and John Barrymore were the grandparents of Drew Barrymore, which makes Helene Costello the great-aunt of the E.T.: The Extra-Terrestrial and The Wedding Singer actress. 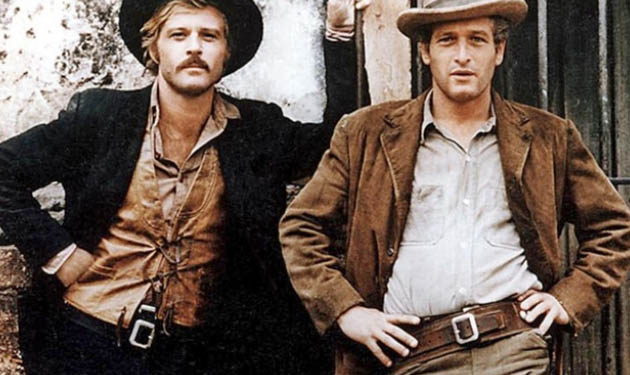 Robert Redford and Paul Newman in ‘Butch Cassidy and the Sundance Kid.’

Great to have so many Robert Redford movies on. He has been my all time favorite actor and so extremely handsome.

He’s my favorite actor and OH! so handsome