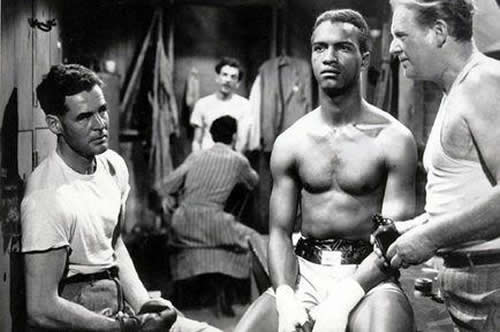 Robert Ryan, one of the most effective Hollywood actors of the studio era – or any other era – will have his Turner Classic Movies Day on Friday, Aug. 13. Friday the Thirteenths don’t get any luckier.

On Robert Ryan Day, TCM will present thirteen of the actor’s films as part of its “Summer Under the Stars” series.

Curiously, Ryan may have been known as one of the screen’s most notorious villains, usually to be found “in deserts with a dirty shirt and a two-day growth of beard.” In real life, however, he was a cultured man with highly liberal political views.

As Ryan himself once explained, “I have been in films pretty well everything I am dedicated to fighting against.”

In Crossfire, Ryan plays a US World War II veteran who has more in common with the Nazis than he (and others) would care to believe. (In the movie, his victim is a Jewish man; in future director Richard Brooks’ novel, it was a gay man.)

For his role as the psycho bigot, Ryan received his one and only Academy Award nomination (in the Best Supporting Actor category). Also in the Crossfire cast: Robert Young, Robert Mitchum, and Gloria Grahame.

A mix of film noir and social commentary, Crossfire was so effective, in fact, that it got director Dmytryk and producer Adrian Scott in big trouble with the far-right patriots of the House of Un-American Activities. Dmytryk and Scott were two of The Hollywood Ten.

The Set-Up features my personal favorite Robert Ryan performance. In this film, played out in “real time” – all 72 minutes of it – Ryan incarnates a washed-up boxer who does what he can to keep on punching and/or getting punched. How else to pursue his American Dream?

This tragic tale (from a screenplay by Art Cohn) is by far the best – and darkest – among the boxing films of that time (Robert Rossen’s Body and Soul, Mark Robson’s Champion), and I find it eons superior to Martin Scorsese’s revered Raging Bull. And to think Robert Wise was the same guy who went to direct the maudlin Somebody Up There Likes Me – not to mention The Sound of Music, which could have used a few punches.

Also, The Set-Up is such an excellent movie that it didn’t get a single Academy Award nomination. Can’t think of a better recommendation – except for the fact that Audrey Totter is in it, too.

Stamp, though actually the film’s lead, was the one nominated for a Best Supporting Actor Oscar. Ryan, as the personification of unbridled passion/madness/evil, should have been won the statuette that year, whether in the lead or supporting category. Needless to say, he was left nominationless.

Also of interest: Sam Peckinpah’s The Wild Bunch (1969), an ultra-violent Western with an all-star cast, including William Holden and Ernest Borgnine; The Boy with Green Hair (1948), a well-intentioned but not all that involving allegory about prejudice, with Dean Stockwell as the boy with the weird hair dye; and Fred Zinnemann’s crime drama Act of Violence (1948), with a solid cast that includes Van Heflin, Mary Astor, and Janet Leigh.

4:30 AM Return of the Badmen (1948)
A farmer falls for the female leader of a band of notorious outlaws. Cast: Randolph Scott, Robert Ryan, Anne Jeffreys. Director: Ray Enright. Black and white. 90 min.

8:00 AM Men In War (1957)
Two enemies join forces to save their men during a retreat from the North Koreans. Cast: Robert Ryan, Aldo Ray, Robert Keith. Director: Anthony Mann. Black and white. 98 min.