Robert Taylor is April 2010’s Star of the Month on Turner Classic Movies. The Robert Taylor Tuesday evening has already begun: Camille (1937), in which he co-stars with Greta Garbo, is on right now. The little-seen (in the last several decades) Magnificent Obsession (1935), with Irene Dunne, was shown before that. (The John M. Stahl-directed melodrama is currently available on DVD via The Criterion Collection.) (See Robert Taylor TCM schedule below.)

Robert Taylor has never been one of my favorite actors. However, he wasn’t nearly as ineffectual as some would have you believe. Taylor was quite good in Johnny Eager (1942) and was excellent in the title role in Ivanhoe (1952).

Off-screen, he was married to Barbara Stanwyck until the early ’50s – Stanwyck reportedly took a long time to get over both their divorce and Taylor’s infidelities. He also espoused nationalist, right-wing views, not hesitating to name names – Howard da Silva and Lester Cole were two – during the post-World War II anti-Red hysteria.

Stories about Robert Taylor as a closeted gay man (and Barbara Stanwyck as an equally closeted lesbian) sound spurious to me. I’ve heard plenty of rumors, but I’ve never heard or read a shred of reliable evidence.

Among the Robert Taylor vehicles being shown tonight on TCM, the one I most recommend is Waterloo Bridge (1940). Some find this version too Hollywood; and it is. But I find Mervyn LeRoy’s direction, Joseph Ruttenberg’s cinematography, Herbert Stothart’s music, the “Auld Lang Syne” sequence, and Vivien Leigh’s performance as the ballerina-turned-streetwalker simply irresistible.

Just try not to laugh when Leigh tells Lucile Watson (as Taylor’s mother) that she is “naive.”

Escape (1940), also directed by LeRoy, is a curious anti-Nazi drama made before the US entered World War II. Norma Shearer, in one of her last films for the studio, co-stars, while silent-screen veteran Alla Nazimova plays Taylor’s mom.

When Ladies Meet (1941) isn’t great drama. Its beginning is clunky and slow-paced, but once Joan Crawford and Greer Garson are left on their own playing off of one another, the movie soars. It’s quite obvious that MGM was then pushing Garson, as she’s lovingly photographed in this one, getting the “nicer” role as well. Crawford would be gone from the studio two years later.

I should add that Taylor’s “Tuesday evening” ends on Wednesday afternoon.

11:15am Lady Of The Tropics (1939)
An American playboy in Saigon has to fight to get his Eurasian wife out of the country.
Cast: Robert Taylor, Hedy Lamarr, Joseph Schildkraut, Gloria Franklin Dir: Jack Conway BW-92 min. 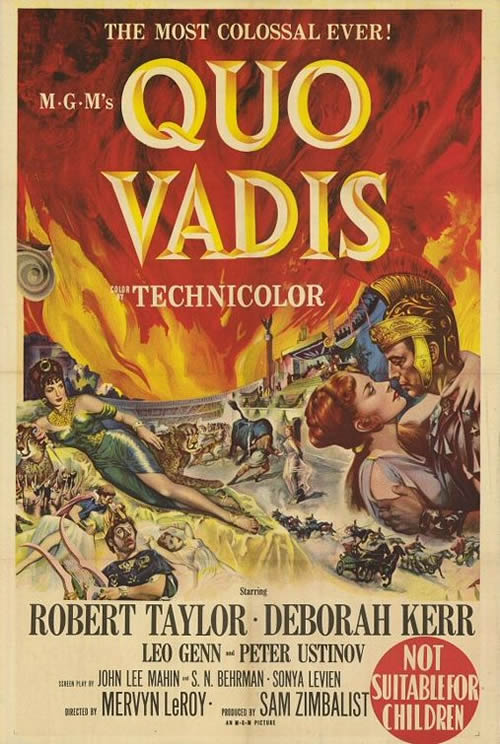 Robert Taylor had some trouble early in his career because he was considered too pretty, with some complaining that he wore more make-up than Greta Garbo in Camille.

As a result, MGM toughened him up in subsequent vehicles such as The Crowd Roars (1938), Billy the Kid (1941) and Johnny Eager (1942). By the 1950s, Taylor, his features now much hardened, had developed into a full-fledged tough guy – steely stare and all.

By then, he’d also matured as an actor. Richard Thorpe’s Ivanhoe (1952), to be shown on Turner Classic Movies this evening, is my favorite among the three dozen or so Robert Taylor movies I’ve seen. In addition to being a rousing adventure tale along the lines of the more famous The Adventures of Robin Hood, Ivanhoe also boasts several excellent performances, including those of Taylor, reaching a career high in the title role, Joan Fontaine, and Finlay Currie. Elizabeth Taylor and George Sanders are also in the cast. (See Robert Taylor TCM schedule below.)

Quo Vadis (1951) was Taylor’s biggest box office hit – and one of Hollywood’s biggest hits of the 1950s, period. In fact, if adjusted for inflation, Quo Vadis remains one of the biggest blockbusters ever.

Quo Vadis was also one of my all-time favorite films when I was five years old or whereabouts. I watched this thing on television and was traumatized for life after witnessing terrified Christians being devoured by hungry lions in living color. No parental guidance could make me get over that kind of stuff. (“Not suitable for children,” warns the poster. They had a point.)

Now, after rewatching Quo Vadis as an adult, my way of relating to it was radically changed. All but ignored were the Christians and their plight; what mattered was a delusional Nero (Peter Ustinov) and a lustful Poppaea (Patricia Laffan; above, with Ustinov), who cares about having one particularly lovely Christian convert torn to pieces.

The movie itself is a hoot straight out of the Cecil B. DeMille School of Christian Piety (though directed by Mervyn LeRoy). It’s hard to imagine how anyone – apart from the most ardent (and humorless) Christian devotee – could take something such as Quo Vadis seriously.

Robert Pirosh’s Valley of the Kings (1954) is just as laughably bad as Quo Vadis, and just as good-looking. Unfortunately, Eleanor Parker is just as wasted as Deborah Kerr in the Ancient Rome epic. Parker has a better – though subordinate – role in Melvin Frank and Norman Panama’s watchable Above and Beyond (1953), which at the time stirred up some controversy because it deals with the atomic bombing of Hiroshima.

W.S. Van Dyke’s Personal Property (1937) is a disappointingly weak comedy; its only point of interest is that star Jean Harlow died that same year. But Roy del Ruth’s Broadway Melody of 1936 (actually released in 1935) has some surprisingly enjoyable moments chiefly thanks to director del Ruth’s snappy touch (he was a Warners director), superb dancer Eleanor Powell, and some quirky supporting players.

6:45am Above and Beyond (1952)
The pilot who helped drop the atomic bomb on Hiroshima struggles with the demands of the dangerous mission.
Cast: Robert Taylor, Eleanor Parker, James Whitmore, Larry Keating Dir: Norman Panama BW-122 min.

Christopher Fry: The Lady’s Not for Burning Playwright

Andre: Apologies for taking so long to get back to you. I’ve been undergoing chemo for Lymphoma … now back in the “game.”

Your question is a good one, & it speaks directly to the “what is said” vs “what is heard” sort of argument. Robert Taylor appeared in front of the 1947 HUAC when he was subpoenaed to do so. He didn’t want to be there. He wrote the committee a letter begging them not to force him to appear. He said there was nothing he could tell them they didn’t already know.

This was true. Every individual who was a “card carrying communism” in Hollywood at the time had already been pegged by the U.S. gov’t as exactly that. Taylor was officially labeled a “reluctant witness” by the gov’t, though the press cont’d to call him a “friendly witness” for publicity purposes. These were terms used by the gov’t to indicate how easy a witness would be on the stand.

Taylor’s questioning was leading. He never said Howard Da Silva was a communist. What he did say was that Da Silva “disrupted” SAG meetings. That term, “disrupt,” was specific terminology for a technique used by Communist Party members during SAG meetings to cause havoc & ensure the business at hand didn’t progress as intended by SAG officers.

When Taylor was questioned, he was asked if he knew names of communists. He did not give any names. When it was realized he wasn’t going to just give it all up, he was asked if he knew anyone who “disrupted” SAG mtgs. He said, well, yes, he knew of a few. Still, he didn’t give names. Then he was asked directly who did this. At this point, he’d either have had to refuse to answer-making himself in contempt-or resond. You’d have to know the kind of man Taylor was … a patriot in the conservative vein, he believed communism was invading the country, & he was a man who’d done what he was told to do most of his life … to understand that refusing to answer was simply not in his repertoire. He’d never have publicly & intentionally dissed a government official or process.

And that Howard Da Silva was known for “disrupting” wasn’t news. Remember, this was intentional, leading questioning. As Taylor had already said in his letter, this was public knowledge. He was being used as a publicity stunt-exactly what he asked them not to do-so the hearings would get more airplay. He was the only actor whose appearance was announced ahead of time w/a schedule-date, time, etc. While other big names were on the stand-& others DID name names, literally-Robert Taylor was the only one whose appearance was turned into a down-&-out publicity stunt. This was because the studio & the gov’t knew he wouldn’t back down if forced to be there … as a “reluctant witness.”

Another thing to keep in mind … each individual involved in this horrible time in American history-started long before McCarthy’s name was attached-was a victim of the process. Each one reacted based on personal convictions, on both sides. The HUAC ruined careers, not Robert Taylor. And there were other actors who DID name names, boldly & blatantly.

This celebration of Robert Taylor’s career is now about a year old but, as his biographer, I can tell you he was an actor worthy of such a retrospect, & much more. Anyone who to this day still calls him “a cowardly right-wing windbag” needs to take time to review history … the TRUTH of history. I respectfully suggest that my book, “Reluctant Witness: Robert Taylor, Hollywood, & Communism” might be a good place to start. Better yet, start w/transcripts from the 1947 HUAC mtgs of Taylor’s testimony … Taylor’s actual words which blatantly show he did NOT name names of Communists. It will become more than obvious if you simply look for factual accounts, rather than spurious commentary found online, written by folks who are repeating rumors-but not fact-put out by people who don’t care enough to find the truth.

Linda,
Thanks for writing, but I have one question:
I’ve seen Robert Taylor on-screen “naming” Howard Da Silva. I can’t remember the exact words Taylor used, but they were something to the effect: “One person who always seems to be saying the wrong thing is a guy named Howard da Silva.” Taylor didn’t look at all reluctant as a friendly witness. At least not in that clip. I’m not sure if that was taken out of context, but, either way, wouldn’t Taylor’s statement be considered a public accusation against an alleged Communist?

Being from Omaha Nebraska I was surprised to learn that Robert Taylor was also from NE. I had seen only a very few of his films in the past and have been truly entertained by seeing so many on TCM this month. I know that his early films treated him as “pretty boy,” but I enjoyed him playing lighthearted, comedic roles. He has a beautiful smile and a wonderful laugh. As he grew into more serious roles and matured as an actor, he put out some very good performances. I’ve really enjoyed TCM’s April focus. Thank you.

What on earth is the prior commenter talking about? If anyone ever deserved a film retrospective it would be an actor/actress who managed to sustain a film career from 1934 - 1958, the longest running “continuously under contract” Hollywood talent ever, Robert Taylor. I am enjoying the movies of this month’s featured actor of the month as a sort of time capsule of the issues and themes of those times. And is there no current web content free of political sneers these days, especially since only an ignoramus would fail to see that both sides of the aisle are the same guy/gal, working for themselves not the normal folk. Focus film…

Why they are giving so much time to this cowardly right-wing windbag is beyond me. Same with Ginger Rogers.