Rock Hudson Was NOT - Regardless of What People Say

Gay actor Rock Hudson was not…

It’s surprising that back in the mid-1980s some people were surprised to learn that Rock Hudson was gay, when the star of Magnificent Obsession, Giant, and the television series McMillan & Wife became the best-known person with AIDS in the world. After all, since I was a little kid I’d heard stories about Hudson’s sexual orientation.

Looking at the above photograph, today’s jaded crowd will surely assert that it’s totally obvious that Rock Hudson was gay – even if there’s nothing “obvious” about Hudson’s sexual orientation in the photo. The guy just looks like a man – gay, straight, anything in between – doing his best to appear classy, or at least what used to pass for classy.

Rock Hudson may not have been all that convincing as a “classy” type à la Cary Grant. Although I’ve always enjoyed Hudson in his comedies with Doris Day, he invariably comes across as an actor – however likable – playing the role of suave seducer. (See “Doris Day: Rock Hudson Remembered“.)

On the other hand, I’ve always found Rock Hudson fully believable in rugged roles, such as his gardener romancing middle-class widow Jane Wyman in Douglas Sirk’s All That Heaven Allows and, especially, his Texan rancher in George Stevens’ Giant, married to Elizabeth Taylor while competing with James Dean.

Now, I should add that the above photo is from the August 1967 issue of Movie Life magazine. But more importantly, you ask, What was Rock Hudson not?

Well, the answer, as per Movie Life, is the following: Regardless of what people say, Hudson was not “Going to the Dogs.” The magazine wasn’t referring to his film career; the promo piece featured eight photos of the actor and his canine pals.

The end of Rock Hudson’s stardom

The television series McMillan & Wife, co-starring Susan Saint James, boosted Hudson’s popularity in the early ’70s, but only on the small screen. He was never to star in another major motion picture – unless, that is, you’d call Pretty Maids All in a Row, Embryo, Avalanche, and The Mirror Crack’d grade-A productions. 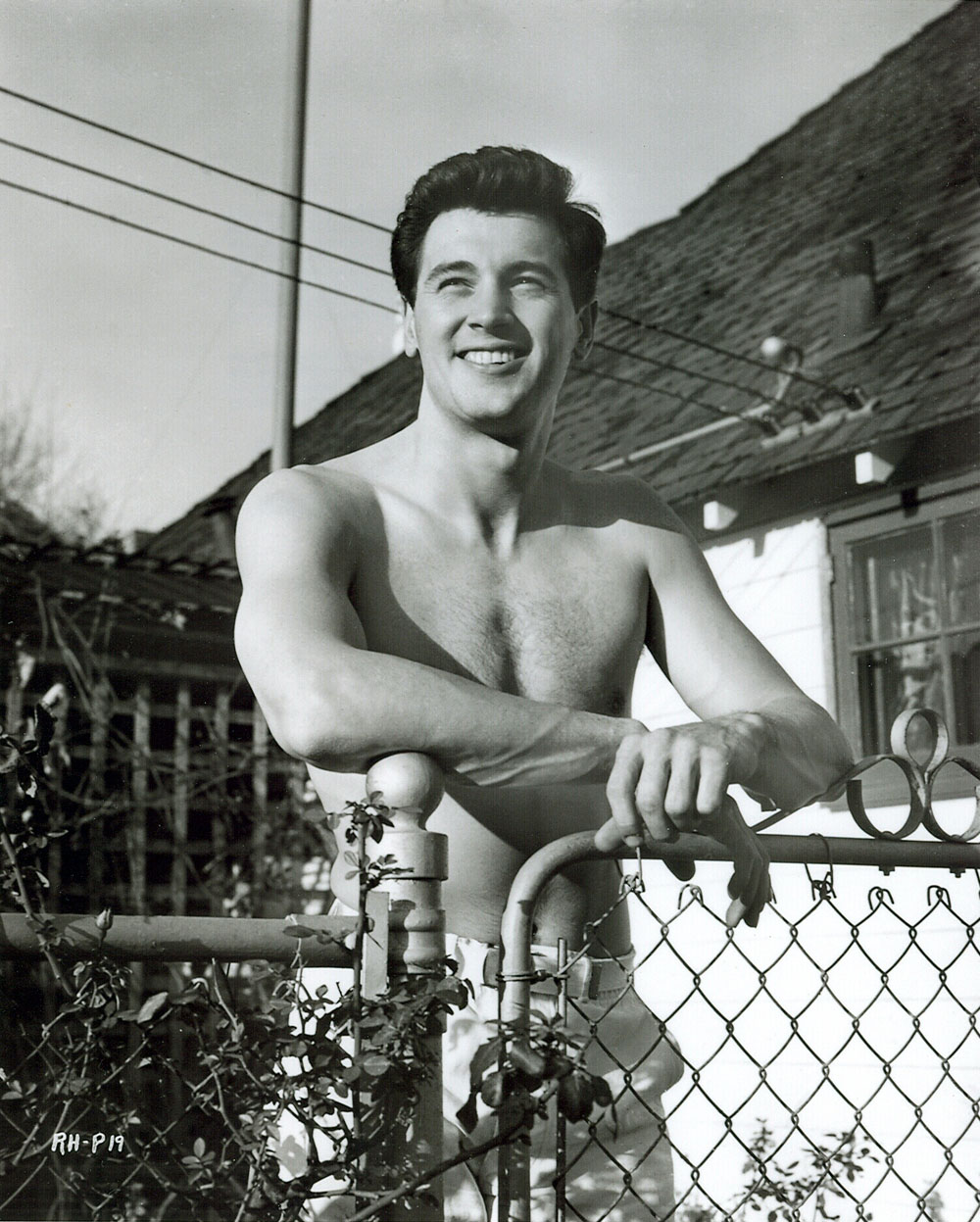 Andrew Davies and Andre Shafer’s Rock Hudson: Dark and Handsome Stranger was screened in the 2010 Berlin Film Festival’s Panorama sidebar. Universal star Rock Hudson, one of the top box office attractions in the United States in the 1950s and early 1960s, died of AIDS complications in his Beverly Hills home in 1985. Hudson, who was gay, lived a closeted life; he was briefly married to his agent’s secretary and reportedly managed to broker a deal with scandal sheet Confidential when the gossip rag threatened to expose him.

Among Hudson’s best-known vehicles are Douglas Sirk’s Magnificent Obsession (1954) and All That Heaven Allows (1955), both co-starring Jane Wyman; George Stevens’ Giant (1956), in which Hudson’s co-stars were Elizabeth Taylor and James Dean, and for which he received his only Best Actor Academy Award nomination; Charles Vidor’s poorly received but highly popular A Farewell to Arms (1957), with Jennifer Jones; Robert Mulligan’s Come September (1961), with Gina Lollobrigida; and his three pairings with Doris Day: Pillow Talk (1959), Lover Come Back (1961), and Send Me No Flowers (1964).

Hudson’s best notices were probably for his role as a man who gets a new identity and a series of new problems in John Frankenheimer’s dark thriller Seconds (1966). The film, however, was a box office disappointment.

On television, Hudson had one big hit: the humorous crime series McMillan and Wife, opposite Susan Saint James.

In 1989, Hudson’s last lover, Marc Christian, won a lawsuit against the Hudson estate. Christian was awarded $14.5 million in damages because Hudson had hidden from him the fact that he was HIV-positive. Christian didn’t acquire HIV from Hudson; a heavy smoker, he died of pulmonary problems in June 2009. 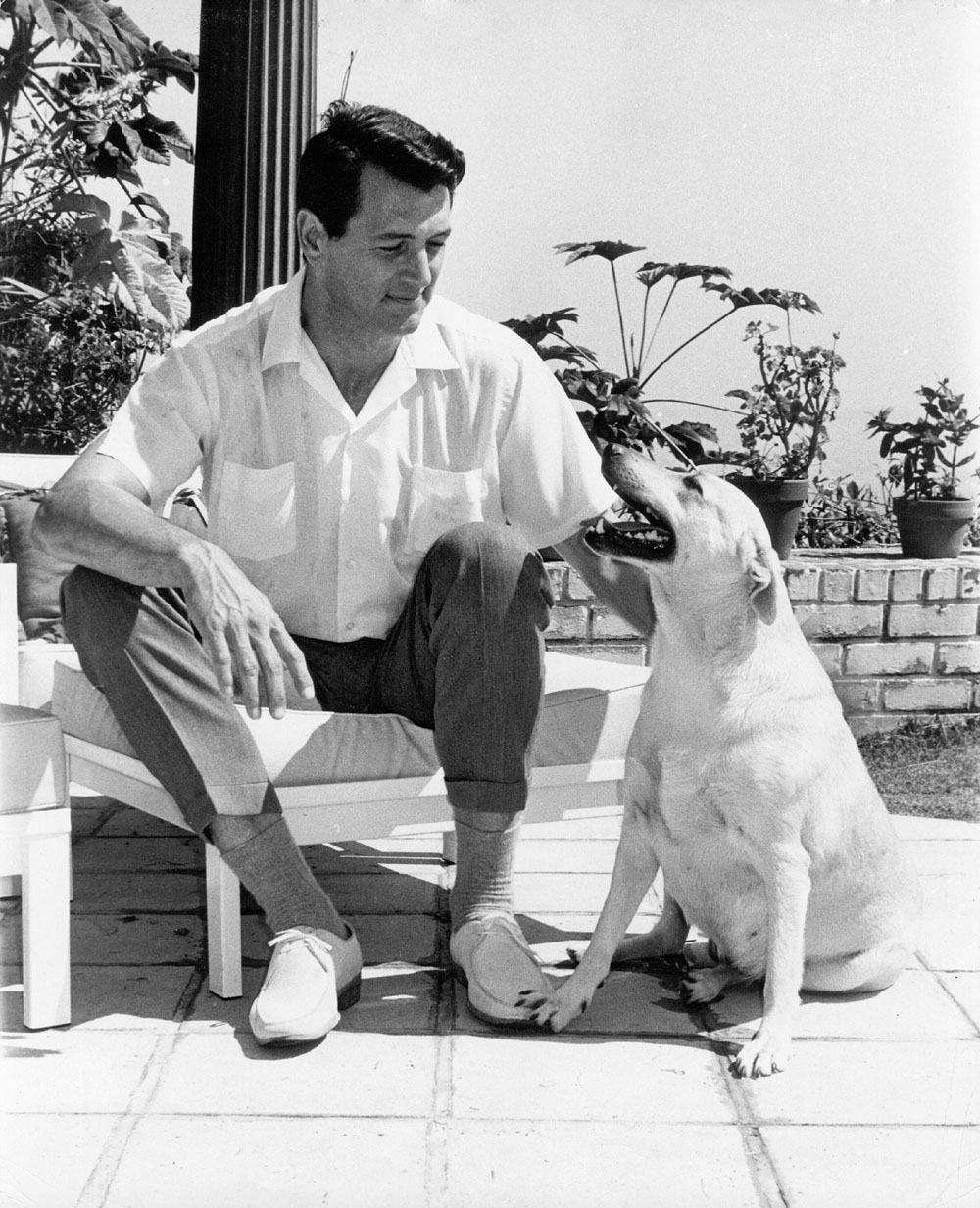 The synopsis below of Andrew Davies and Andre Shafer’s Rock Hudson: Dark and Handsome Stranger is from the Berlin Film Festival website:

Rock Hudson was a dream of a man; the epitome of masculinity: tall, slim and muscular, with a deep, mellifluous voice. His glossy black hair, sparkling eyes, high cheek bones and sensuous lips made Rock Hudson one of the sexiest film stars that Hollywood has ever produced. Twenty-five years ago, shortly before his sixtieth birthday, Rock Hudson died of Aids-related illnesses. He was the first Hollywood celebrity to succumb to the acquired immune deficiency syndrome.

But who was Rock Hudson really? This documentary sheds light on a famous actor star who performed a clandestine balancing act between his private and public lives; between the heterosexual world of an extremely manly looking screen idol and a darker side of forbidden sexuality lived by a secretly gay man.

The film combines extensive archive material, trailers and excerpts from his films, but also photographs, footage from his private archive and interviews in order to commemorate Rock Hudson’s life and career. The filmmakers met up with the star’s childhood friends in his birthplace in Winnetka, Illinois, and went to New York and Los Angeles to conduct interviews about his Hollywood career. Rock Hudson’s close friends and confidantes – including best-selling author Armistead Maupin (Tales of the City), producer and director Stockton Briggle and PR manager Yanou Collart – all provide an insight into the life of a Hollywood legend.

Film historians Richard Dyer and Robert Hofler, author of the book The Man Who Invented Rock Hudson, as well as gossip columnist Rona Barrett also explain the way in which Hollywood’s star and studio systems function. In addition, actors Richard Anderson and Salome Jens as well as Leonard Stern, who produced a television series with Rock Hudson, all share their experiences of working with the star on set.

Note: This synopsis of Rock Hudson: Dark and Handsome Stranger was initially posted in Feb. 2010.

Re: Your commenter who said he was a handsome man, but hardly a good actor.
He was the best actor in playing the role in public of a handsome, kind straight man and even people who knew him well had trouble believing he was gay. I also saw him in films where he did a very good acting job. Not a nice put down by thisnthat42.
He brought joy to many people including myself. He also helped bring the scourge of Aids to the attention of the public which has led to medications to treat this illness. My only criticism is that he did not tell his last lover that he was gay. This lover sued his estate for a great deal of money but never died of Aids but of the results of heavy smoking. Ironic.

Certainly, he was a handsome man, but hardly a good actor.

I could not care less about who was Roy Scherer Jr. ´s favourite sort of ´bedfellows´, was: be them guys, ladies and or farm animals. What I miss is his incredible charisma (the camera just loved him) and his very underrated acting abilities (he is way more convincing in GIANT-a movie that has not aged well at all and i was never too fond of, to begin with), than the legendary Jimmy Dean (EAST OF EDEN is Dean´s best performance in the Silver Screen hands down).
He is even effective in what I think is his last film role, the so-so political thriller THE AMBASSADOR, starring the superb Ellen Burstyn and with Italian Sex Symbol Fabio Testi in/on it.

Rock Hudson was not gay just because he had aids, Anyone can contract aids without butt plugging. Rock was a man’s man but he was never gay. If he ever said he was it was probably just to shut people up because people are going to think what they want or what is more fun to them. This is why people are stupid, and why human beings will never last. People get dumber and dumber each new generation. The last good generation we had are now dying off, which pretty much is going to be the end. Why else would people stand for there rights being taking away without doing a thing? Why would they elect Bush twice and actually consider Romney? Why did McCain and Palin actually make it to the head republican vote? Why did we elect a president for no other reason but because we never had a african american as president? Because people are stupid thats why. People are so stupid any idiotic tv show or commercial can easily brain wash them. Human beings are just brainless twits.

Rock Hudson was such a wonderful ,elegant, charming, handsome actor and I thoroughtly enjoy watching his movies on dvd. I particularly like his comedies with Doris Day and although people think Darling Lili was a disaster, I have such fun seeing the great, adorable Julie Andrews cursing him just to kiss him madly while taking a shower! To me Darling Lili is great Blake Edwards entertainment. I don’t care about Rock’s private life, just feel sorry that people still remember him mostly for the sunset days of his life. To me, all the way he was as brave and great in real life as he was in films. Elizabeth Taylor and Julie Andrews remained good friends and the latter always mentions him as ‘so sweet’ in interviews.

Who cares that Rock Hudson was gay. What is important is that he was a convincing actor, sometimes terrific and sometimes just good, depending on the part, the writing, and the direction. And yes, great with Douglas Sirk. No, he was not Cary Grant, NOBODY was, but he was a classy light comedy actor as well. He certainly carried himself at the end with dignity and class. RIP Rock!