Rod Taylor, best remembered for the early 1960s movies The Time Machine and The Birds, has died. Taylor suffered a heart attack at his Los Angeles home earlier this morning (Jan. 8). Born on Jan. 11, 1930, in Sydney, he would have turned 85 on Sunday.

Based on H.G. Wells’ classic 1895 sci-fi novel, The Time Machine stars Rod Taylor as a H. George Wells, an inventor who comes up with an intricate chair that allows him to travel across time. (In the novel, the Victorian protagonist is referred to simply as the “Time Traveller.”)

After experiencing World War I and World War II, Wells decides to fast forward to the distant future, ultimately arriving at a place where humankind has been split into two: the monstrous Morlocks and the sweet, Germanic-looking Eloi. Love blooms once Wells meets the Eloi Weena – played by Yvette Mimieux, who, coincidentally, is turning 72 today.

Directed by George Pal, The Time Machine remains one of the most captivating sci-fi movies ever made. Taylor delivers a strong, commanding performance as Wells – a tad hammy, maybe, but that’s part of the movie’s charm; not for a moment does the star turn his old-fashioned hero into a risible caricature. 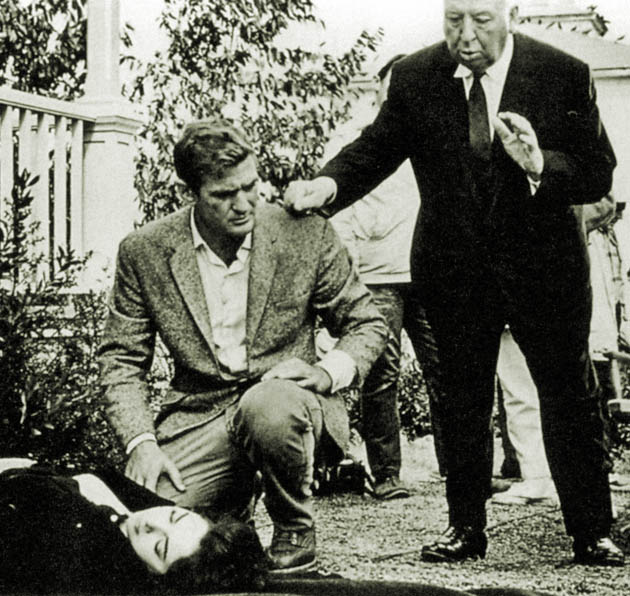 Rod Taylor on the set of The Birds, with Alfred Hitchcock and Suzanne Pleshette (on the ground).

Three years after The Time Machine, Rod Taylor would be cast in another seminal movie of the 1960s: Alfred Hitchcock’s thriller written by Evan Hunter from Daphne Du Maurier’s novel about nature turning against humans: The Birds.

Hitchcock discovery Tippi Hedren, who was to have become the director’s new Grace Kelly, stars as a woman who, for unclear reasons, attracts the hatred of birds in the Northern California coastal town of Bodega Bay.

Like most of the film’s cast – which includes Veronica Cartwright, Ethel Griffies, Charles McGraw, and future Best Actress Oscar winner Jessica Tandy (Driving Miss Daisy, 1989) – Taylor is little more than human decoration in The Birds, helping a heroine in distress in one scene, arriving too late to help another heroine in distress in another. The sole exception: Suzanne Pleshette, who miraculously succeeds in creating a well-rounded character.

However badly dated many of its special effects and however ineffectual the acting of most of its players, The Birds – a Hollywood color production accessible on television for decades – remains one of Hitchcock’s best-known and most widely admired movies.

There would be other important movies in Rod Taylor’s film career, but nothing to match the (eventual) prestige of The Time Machine and The Birds. Here are a few examples: 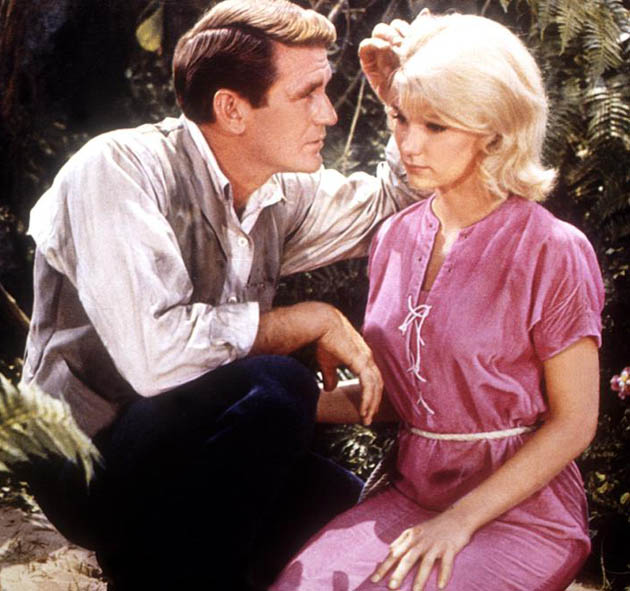 Rod Taylor in The Time Machine, with Yvette Mimieux.

First Australian actor to make it in Hollywood?

Despite what some have claimed online, Rod Taylor was not the first Australian actor (whether born or raised in Australia) to succeed in Hollywood, even though he arrived in California decades before Peter Finch, Mel Gibson, Cate Blanchett, et al.* Long before Taylor, there were a few others; to name four:

In fact, one could go all the way back to the 1910s, when Australian swimmer-turned-actress Annette Kellerman starred in the features Neptune’s Daughter and A Daughter of the Gods, among others. (Esther Williams played Kellerman in Mervyn LeRoy’s highly fictionalized 1952 biopic Million Dollar Mermaid.)

Image of Suzanne Pleshette, Alfred Hitchcock, and Rod Taylor on The Birds set: Universal Pictures, via The Hitchcock Zone.

When they say that Taylor was ‘the first Australian successful in Hollywood’, they mean that he was the first to have a characteristically Australian image (that means he actively acknowledged his roots), not that he was literally the first one.
Other Australian actors before him, like Flynn and Finch, didn’t have that since they could pass themselves as British, not Australian.