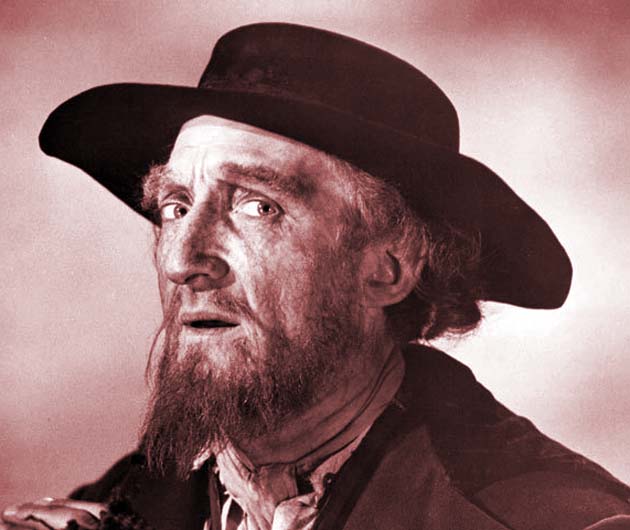 (See previous post: “Ron Moody: Oliver! Actor, Academy Award Nominee Dead at 91.”) Although British made, Oliver! turned out to be an elephantine release along the lines of – exclamation point or no – Gypsy, Star!, Hello Dolly!, and other Hollywood mega-musicals from the mid’-50s to the early ’70s.[1]

But however bloated and conventional the final result, and a cast whose best-known name was that of director Carol Reed’s nephew, Oliver Reed, Oliver! found countless fans.[2] The mostly British production became a huge financial and critical success in the U.S. at a time when star-studded mega-musicals had become perilous – at times downright disastrous – ventures.[3]

Upon the American release of Oliver! in Dec. 1968, frequently acerbic The New Yorker film critic Pauline Kael, best remembered as an ardent supporter of gritty films such as Bernardo Bertolucci’s Last Tango in Paris and Hector Babenco’s Pixote, penned “The Concealed Art of Carol Reed.” In her essay, Kael extolled the virtues of the veteran filmmaker while affirming that with Oliver! Reed had “just made the kind of movie they don’t make anymore.”[4]

Admittedly, not every major U.S. critic was a fan. The New York Times’ Vincent Canby began his review with the following:

Oliver! is an elaborate and faithful movie enlargement of the Lionel Bart operetta in which a wistful little Oliver Twist sings “Where is love? / Does it fall from the skies above?” Although the program notes say that Oliver is yearning for a mother, one fully expects Alice Faye – looking seductive and moon-faced – to appear in a balloon over his head.

About Ron Moody’s performance, he remarked:

There is a jolly Fagin, played by Ron Moody in a London music hall style, which is very well if you insist on turning Fagin into an only slightly bent scoutmaster.

Despite Canby’s seemingly negative take on Moody’s characterization, further down in the review he stated that Fagin and John Box’s production design were two of the “nice things” about Oliver!.

Below: Ron Moody as Fagin and Jack Wild as the Artful Dodger at the 41st Academy Awards.

Members of the Academy of Motion Picture Arts and Sciences clearly felt that Oliver! had more than two nice things going for it. Carol Reed’s film was nominated for 11 Academy Awards, taking home five Oscar statuettes – including Best Picture and Best Director – in addition to an Honorary Oscar for choreographer Onna White.

Ron Moody was one of three British performers shortlisted for Best Actor, but they all lost to Hollywood’s own Cliff Robertson.[5] As compensation of sorts, Moody did at least take home a Golden Globe – back then a lesser-known award – in the Best Actor (Comedy or Musical) category.

On the other side of the Atlantic, he was, as to be expected, nominated for the British Academy Awards. The winner that year, however, was another Hollywood performer: veteran Spencer Tracy, who received a posthumous BAFTA for Stanley Kramer’s blockbuster Guess Who’s Coming to Dinner (a 1967 release in the U.S.).

Ultimately, Oliver! would remain not only the highlight of Ron Moody’s movie career, but for all purposes his one major big-screen vehicle.

In-between the stage and film versions of Oliver!, Ron Moody could be seen in two Margaret Rutherford movies:

In the early ’70s, Ron Moody had two other important roles: 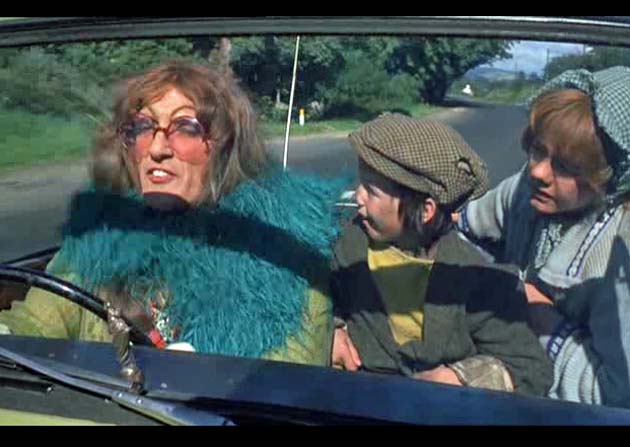 Ron Moody in ‘Flight of the Doves,’ with Jack Wild and Helen Raye also in drag.

Most of the Ron Moody movies that followed went under the radar upon their release and are now largely forgotten.

Titles include the following:[7]

As found on the IMDb, Ron Moody’s final big-screen role was in Danny Patrick’s little-seen adventure drama Moussaka & Chips (2005), which also happened to be Jack Wild’s last appearance in front of the camera.

Additionally, Moody would provide the voice of one of the characters in James Tovell’s 2010 animated short The Lizard Boy, and would be seen walking at night through the streets of London – including Fagin’s old haunts – in Tim Shore and Gary Thomas’ 2012 short Fits and Starts of Restlessness, made for the British Council.

Somewhat curiously, he was one of the (seemingly) few renowned British performers of the 1960s and 1970s absent from the Harry Potter movies. Age may have been a factor. After all, Disney’s Merlin was already 77 when the first entry in the franchise, Harry Potter and the Sorcerer’s Stone, was released.

‘Ron Moody: From Dickens to Disney (But No Harry Potter)’ notes

[1] Below is a long, long – but hardly exhaustive – list of big-screen, big-budget, big-marketed Hollywood or Anglo-American musicals released between the mid-1950s and the early 1970s. Most of them were adaptations of Broadway hits – for a while a surefire means to lure audiences away from their television sets.

[2] The Oliver! cast included the following:

In 2004, a British tabloid revealed that Lester’s singing voice in Oliver! had been dubbed by Kathe Green, daughter of the film’s Oscar-winning musical arranger Johnny Green. Nearly a decade later, Lester turned into tabloid fodder as a result of a paternity claim regarding one of singer Michael Jackson’s daughters.

Mark Lester would remember Ron Moody as being “very jolly” on the Oliver! set.

Despite a Best Supporting Actor Oscar nomination for his Artful Dodger, teen actor Jack Wild was unable to keep his professional momentum going. He would be featured in Pufnstuf (1970) and The Pied Piper (1972), and was reunited with Moody in Flight of the Doves; yet his film career would be virtually over by the mid-’70s.

Later on, Wild developed a chronic alcohol problem. A few years after writing an open letter to Daniel Radcliffe about the dangers of child stardom, Wild died of cancer at age 53 in 2006.

“We’ve lost a great artist and I’ve lost a great friend,” Ron Moody said at the time. “We were more like Laurel and Hardy. We used to call ourselves Fagin and Dodger. We had that kind of bond between us. Jack really was cheated out of a great career.”*

For the record, the 1968 Best Supporting Actor Academy Award winner was veteran Jack Albertson for Ulu Grosbard’s The Subject Was Roses.

* Ron Moody quote re: Jack Wild via The Guardian.

The most prolific film performer among the key cast members of Oliver!, Oliver Reed was featured – in roles big and small and tiny – in nearly 100 movies, including several for 1970s cult icon Ken Russell, e.g., Women in Love, The Devils, Tommy.

Of course, such estimates should always be taken with caution, especially in the case of movies like Oliver! – a roadshow release with tickets priced quite a bit above the average.

Below: Ron Moody as Fagin in ‘Oliver!’ singing ‘Reviewing the Situation.’

[4] Pauline Kael quote via Murray Pomerance’s Where the Boys Are: Cinemas of Masculinity and Youth.

Kael’s capsule review of Oliver! is found in her book 5001 Nights at the Movies and, online, in an Aug. 1984 edition of The New Yorker. Here’s a snippet:

On the stage Oliver! was an undistinguished musical that people took their children to, dutifully; it was an English variant of Broadway Americana. The movie [adapted by Vernon Harris] transforms the material; it’s not only a musical entertainment but an imaginative version of the novel as a lyrical, macabre fable.

Filmmaker and critic Lindsay Anderson (This Sporting Life, If….) must have begged to disagree. He would later say that the director of Odd Man Out, The Fallen Idol, and The Third Man was “a very curious and sad case really. He’s obviously a man of immense talent who somehow went astray. He ended up in Oliver somewhere.”

Anderson’s comments are found in “The Tradition of Independence: An Interview with Lindsay Anderson,” conducted by Lester Friedman and Scott Stewart. The interview can be found in ReViewing British Cinema, 1900–1992, edited by Wheeler Winston Dixon.

Also of note, two years after Oliver! another musical adaptation of a Charles Dickens novel, the Ronald Neame-directed Scrooge, failed to make much an impact. Pauline Kael would call it an “innocuous musical version of A Christmas Carol, starring Albert Finney looking glum. The Leslie Bricusse music is so forgettable that your mind flushes it away while you’re hearing it.”

And finally, Vernon Harris had been writing British films long before Oliver!. Among his screenwriting credits were these three collaborations with filmmaker Lewis Gilbert – who, coincidentally, had been initially mentioned as the possible director of the 1968 musical:

Cliff Robertson won that year for his performance as a mentally handicapped man who (temporarily) becomes a genius in Ralph Nelson’s Charly, co-starring Claire Bloom.

The only surviving 1968 Best Actor nominee is now 81-year-old Alan Arkin, who was shortlisted for Robert Ellis Miller’s The Heart Is a Lonely Hunter – and who finally took home an Oscar statuette at the 2007 ceremony, as Best Supporting Actor for Jonathan Dayton and Valerie Faris’ sleeper hit Little Miss Sunshine.

Besides Ron Moody and Spencer Tracy, the other two 1968 Best Actor BAFTA nominees (only four performers were listed) were:

As found on the IMDb, Oliver! also earned Ron Moody the Best Actor Award – shared with Tadeusz Lomnicki for Jerzy Hoffman’s Colonel Wolodyjowski – at the 1969 edition of the Moscow Film Festival. 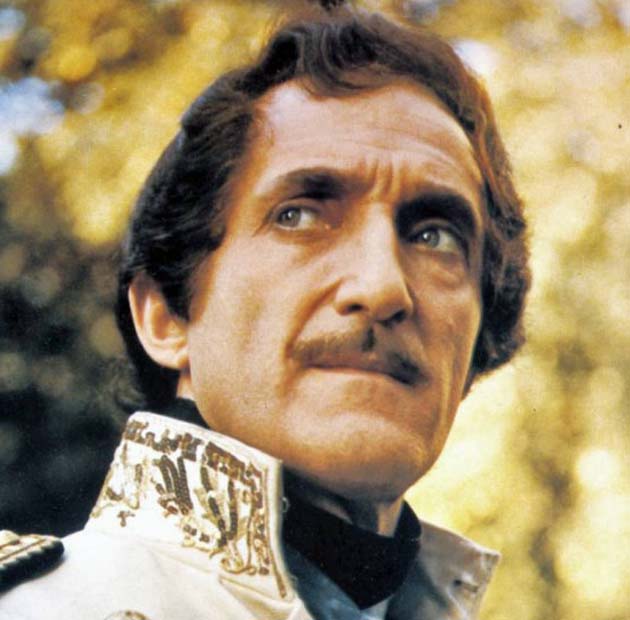 [7] Below is director and cast info of a handful of Ron Moody movies mentioned in the article.

Image of Ron Moody as Fagin in Oliver!: Columbia Pictures.

Image of Ron Moody apparently in The Mouse on the Moon via The Cinema Museum.

Image of Helen Raye, Jack Wild, and Ron Moody in Flight of the Doves: Columbia Pictures.