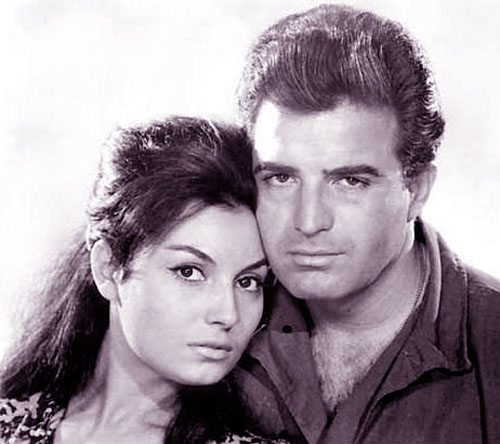 Rosanna Schiaffino, the sensual leading lady of dozens of Italian (and a few international) productions of the ’60s and early ’70s, died on Oct. 17, ’09, at her home in Milan following a long battle with cancer. She was 69.

The Genoa-born (Nov. 25, 1938) actress, referred to by some as the “Italian Hedy Lamarr,” began her film career in the late 1950s. Among her best-known roles are those in Francesco Rosi’s first feature, La Sfida / The Challenge (1958); Mauro Bolognini’s La Notte brava / The Big Night / Bad Girls Don’t Cry (1959), winner of the Italian Film Critics’ Silver Ribbon for Pier Paolo Pasolini’s screenplay; and André Hunebelle’s historical drama Le Miracle des loups / The Miracle of the Wolves (1961), opposite Jean Marais.

Also, a supporting role in Vincente Minnelli’s Two Weeks in Another Town (1962); another lead for Bolognini in La Corruzione / Corruption (1963), with Alain Cuny, Jacques Perrin, and Isa Miranda; and she was one of the many big names in Carl Foreman’s all-star World War II drama The Victors (1963).

According to the IMDb, Schiaffino’s last appearance in front of the cameras was in the Italian television miniseries Don Giovanni in Sicilia (1977).

Schiaffino was married to producer Alfredo Bini from the early ’60s to the late ’70s. From 1982 to 1996, her husband was industrialist Giorgio Falck, who learned from Bini that “Rosanna was a good woman; one who deserves to be treated like a queen.”

Her “multi-millionaire” mid-’90s divorce from Falck – following a lengthy and nasty court battle – made headlines in Italy at the time.

Hugh Martin: ‘Have Yourself a Merry Little Christmas’ Composer