It is a typically hot day in Palm Springs on May 5, 2001, as I sit outside the Palm Springs Museum at the invitation of Roy Rogers’ oldest daughter, Cheryl, while a star in his remembrance is placed on the sidewalk in front of the building.

I am seated next to Ruth Terry, a lady with whom I am totally unfamiliar, but who, it transpires, was a leading lady to both Roy Rogers and Gene Autry. As we talk, it is obvious that she is also a very sensible and charming lady.

I express my vote for Roy Rogers over Gene Autry, and she agrees, pointing out that Roy was friendly and down-to-earth. She explains that she never really knew Gene Autry, as between takes he would always be on the telephone talking business. “I never had the feeling I was actually working with him.”

Ruth Terry also confirms that, much as I have no recollection of any of these Western leading ladies (with the obvious exception of Dale Evans), she didn’t know any of them either.

It was a fun weekend, meeting Roy Rogers’ family, all of whom were as friendly and hospitable as one suspected – or rather knew – Roy must have been. The ceremony was marred only by a group of drunk or stoned teenagers driving by in an open car and shouting abuse at Roy Rogers Jr.

He responded, much as one suspected his father might have done, with suggestions as to appropriate forms of discipline that might be applied to their backsides.

I had never really paid too much attention to Roy Rogers’ work until that weekend, which had commenced with two of his films recently preserved and restored by Robert Gitt of the UCLA Film and Television Archive.

The first film, Under Western Stars, released in April 1938, marked the “screen debut” of Roy Rogers. Of course, he had actually been around a lot earlier, first as Len Slye in supporting roles in some ten films, and then, as Dick Weston, a name given to him by Republic Pictures, in two additional films, again in non-starring roles.

Roy had come to attention as a singer, joining forces with two friends, Tim Spencer and Bob Nolan, to form the Pioneer Trio, which later became the Sons of the Pioneers – familiar to audiences in countless Westerns of Roy Rogers and others.

The year 1934 was a big one for the Sons of the Pioneers, in that they began performing regularly on radio station KFWB in Los Angeles, signed a Decca Record contract, and began to appear in Charles Starrett Westerns at Columbia.

In 1936, Rogers embarked on a happy marriage – his first had ended in divorce – to Grace Arline Wilkins. Sadly, it ended with her death in 1946, following the birth of Roy Rogers Jr.

Republic was not exactly noted for its generosity and so, rather than give in to Autry’s demands, it decided to recruit a new star from its contract players – and that star was Roy Rogers.

Under Western Stars, which began shooting a little more than a month prior to its release, had already been scheduled as a Gene Autry vehicle; so Rogers simply took over the part and the script. But what makes the film so fascinating, apart from the entertainment appeal provided by Roy Rogers himself, is that the script – credited to Dorrell and Stuart E. McGowan, and Betty Burbridge – is so unusual. 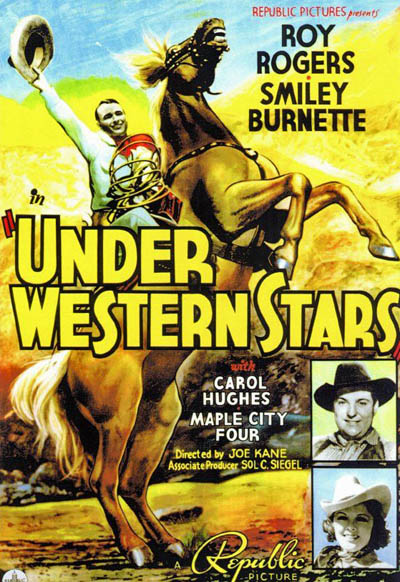 Under Western Stars with Roy Rogers: Singing cowboy B movie seemingly proposes that water is a universal human right and that politicians should represent the people, not lobbyists or special interest groups. The newly rebaptized Roy Rogers – also the name of most of his post-1938 movie characters – had previously been featured in about a dozen Westerns, almost invariably as a Sons of the Pioneers band member.

There is absolutely no clue as to why this film, directed by Joseph Kane, should have been so liberal-minded in its approach to politics and special interest groups. No one involved is known to have had leftist-leanings, least of all populist hero Roy Rogers.

There are two outstanding songs in Under Western Stars: “Listen to the Rhythm of the Range” and “Dust,” with music by Johnny Marvin and lyrics by Gene Autry. With the obvious threat of climate change, the latter song[1] takes on even more relevancy today.

Because of their contractual dispute, Republic failed to give Autry screen credit. As a result, he sued for unauthorized use and dramatization of “Dust,” which was nominated for an Academy Award. Once Autry returned to the Republic fold, the suit was settled out of court.

Under Western Stars could not have been a better vehicle for Roy Rogers’ screen debut under his new name. It is not only entertaining and realistic (despite the songs and Roy’s over-the-top cowboy garb), but it might also be argued that the film was a new type of Western – one with political overtones, although not one that led to many successors. 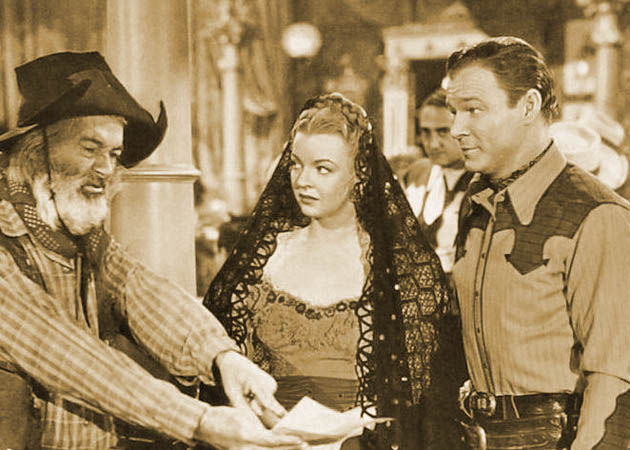 Roy Rogers and Dale Evans in Rainbow over Texas, with George ‘Gabby’ Hayes. Evans was Rogers’ frequent leading lady (Don’t Fence Me In, Bells of Rosarita, etc.) while Hayes was his usual sidekick (Sheriff of Tombstone, Song of Arizona, etc.). Missing from the movie still is the Singing Cowboy’s (and his fans’) most important and most intimate film companion: Trigger, “The Smartest Horse in the Movies.”

The second Roy Rogers Western screened that weekend was Frank McDonald’s Rainbow over Texas, starring Roy and his screen and eventual life partner Dale Evans. Leonard Slye had been married twice before and Lucille Wood Smith three times, but as Roy Rogers and Dale Evans, they tied the knot in 1947.[2]

Roy had legally changed his name in 1942, and with “Roy” meaning “King,” it is more that appropriate that he and Dale became the King and Queen of the Cowboys – even though in their first film together, in 1944, the title suggests more down-to-earth personae: Cowboy and the Senorita.

Released in May 1946, Rainbow over Texas marks the couple’s 13th screen appearance together, despite Dale’s getting billing below Roy and Trigger – identified as “The Smartest Horse in the Movies” (and who am I to disagree).

By then, Dale Evans had been already complaining not only about her billing but also about the limited amount of time she was on camera. In Rainbow over Texas, she does get more than her usual screen time, besides getting to wear a bathing suit (and who am I to disagree with such an attractive sight).

In reality, Dale was always to play second fiddle to Roy and Trigger. In fact, in 1949 it was the latter two who got to put their feet and hoof prints in the cement at Grauman’s Chinese Theatre. Dale was just an onlooker.

‘Happy Trails’ to everyone

Trigger died in July 1963, at the age of 33 – pretty old for a horse. Roy later had him stuffed and he became a familiar sight at the entrance to the Roy Rogers and Dale Evans Museum in Victorville, just outside of Los Angeles. Sadly, the Museum is no more, while Trigger was sold at auction for $266,500.

Roy Rogers died in July 1998, at the age of 86; Dale Evans died in February 2001, at the age of 88. Both had been appearing in later years on the Trinity Broadcasting Network, with Dale seeming to be more of an enthusiastic Christian advocate than her spouse.

Ultimately, Rogers and Evans don’t need a museum to live on in the memory of their fans – admittedly, somewhat smaller in number today – as I am sincerely of the belief that anyone viewing Under Western Stars will become a new fan.

The appeal of this and their other films is enduring. Their theme song, “Happy Trails to You,” written by Dale, is symbolic of what awaits all of those new fans and admirers.

From ‘Dust’ to eternity

[1] Note from the Editor: The final lyrics in “Dust” are the following:

Oh Lord, please ease my pain
Oh Lord, where is your rain and sunshine
Dust, dust, must it be, can this be eternity
Oh Lord, have mercy on poor me

[2] Roy Rogers’ first wife was Lucile Ascolese; they were married on May 8, 1933, in Santa Ana, California. There was an acrimonious divorce in 1936.

As mentioned elsewhere in this piece, Rogers was married to Grace Arline Wilkins from 1936 to her death a decade later.

Dale Evans married Thomas Frederick Fox in 1927. The couple were divorced in 1929.

That same year, she married August Wayne Jones. They were divorced in 1935. It was during their marriage that she came up with Dale Evans as her artistic name.

Next in line was Robert Dale Butts, whom she married in 1937. They were divorced in 1946 – the year Rogers’ wife Grace Arline died.

Also worth noting, in 1938 vaudevillian Roy Rogers filed suit over the Singing Cowboy’s use of his name. The case was settled out of court.