Via the ABC News blog The Blotter: Anna Schecter reports that the case of the missing ruby slippers worn by Judy Garland in The Wizard of Oz may be coming to a close.

The ruby slippers were stolen from the Judy Garland Museum (website) in Grand Rapids, Minn., (that’s Garland’s hometown) in August 2005. The thief is apparently either some Oz-Dorothy-Judy-ruby-slipper fanatic – and there are plenty of those out there – or a savvy (if unscrupulous) investor. The bejeweled footwear is officially valued at US$1 million. (The most recent sale price of another pair of Judy’s Oz slippers, however, were sold at auction at Christie’s for $666,000 in 2000).

The stolen slippers’ rightful owner was Hollywood acting coach Michael Shaw, who had loaned them to the museum. (Shaw had paid $2,500 for his pair in the early 1970s; he received $666,000 from the museum’s insurance company.) When the theft took place, the museum alarm system had been shut off. The wicked thief of the Upper Midwest broke a back window in order to swipe the precious objects. The thief then clicked his/her heels and disappeared.

Three other pairs are known to have been used in The Wizard of Oz: One such pair is on display at the Smithsonian Museum of American History (website) in Washington, D.C., another belongs to collector Philip Samuels of St. Louis, and the third pair is owned by a memorabilia collector who, according to Schecter, “plans to open his own museum in Hollywood.”
Debbie Reynolds owns “a test pair” that was made for the movie but that never felt Dorothy’s feet while the cameras were rolling.

Needless to say, fans of Dorothy have been in an uproar.

“Everybody’s accusing everybody of stealing them,” the lead investigator on the case said.

The 2007 50th San Francisco International Film Festival – according to its organizers, the first such event in the Americas to turn 50 – will take place between April 26–May 6.

Among the scheduled films are:

On opening night, Emanuele Crialese’s Nuovomondo / Golden Door, Italy’s submission for this year’s best foreign-language film Academy Award will be presented at the Castro Theatre. Nuovomondo follows an Italian family who leaves a remote Sicilian village for the United States in 1913. Charlotte Gainsbourg heads the cast.

And finally: Satyajit Ray’s Pather Panchali, the first installment of Ray’s revered Apu Trilogy of the mid-to-late 1950s. Pather Panchali isn’t the best one of the three – Aparajito is by far the most involving – but even though Ray spends way too much time showing mosquitoes walking on water, this introduction to Apu’s poor Indian family offers several touching moments.

Two acclaimed documentary features, David LaChapelle’s Rize (above) and Jeff Zimbalist and Matt Mochary’s Favela Rising, will be screened on Wednesday, May 9, as the next installment in the 2006–2007 Contemporary Documentaries series, presented by the Academy Foundation of the Academy of Motion Picture Arts and Sciences and the UCLA Film & Television Archive (website). The screenings will begin at 7 p.m. at the Academy’s Linwood Dunn Theater in Hollywood. Admission is free.

Rize looks at a South Central Los Angeles dance style known as “krumping.” As per the Academy’s press release, “the film focuses on a sub-community of young performers who, despite being surrounded by drug addiction, gang activity and poverty, remain optimistic and upbeat. The spirit and creativity of these krumpers allow them to rise above their environment and foster a sense of family where none existed before.” Rize was produced by LaChapelle, Marc Hawker, Ellen Jacobson-Clarke, Richmond Talauega, and Tone Talauega. Following the screening, LaChapelle will discuss the making of the film and take questions from the audience.

Favela Rising (above) is mostly set in Vigário Geral, “one of Rio de Janeiro’s most notorious slums, or favelas – home to teenage drug armies, ferocious violence and countless murders. In the film, one man, Anderson Sá, rallies his community to deploy music and dance as weapons against drug lords, corrupt police and the oppression of their surroundings. But just as the AfroReggae movement is showing signs of success, a tragic accident threatens its future.”

All screenings in the series are free and open to the public. Doors open at 6 p.m. The Linwood Dunn Theater is located at the Academy’s Pickford Center for Motion Picture Study, 1313 Vine Street, at the northwest corner of Fountain Avenue and Vine Street in Hollywood. Parking is available behind the building through the entrance on Homewood Avenue, one block north of Fountain. For more information, call (310) 247-3600 or (310) 206-FILM. 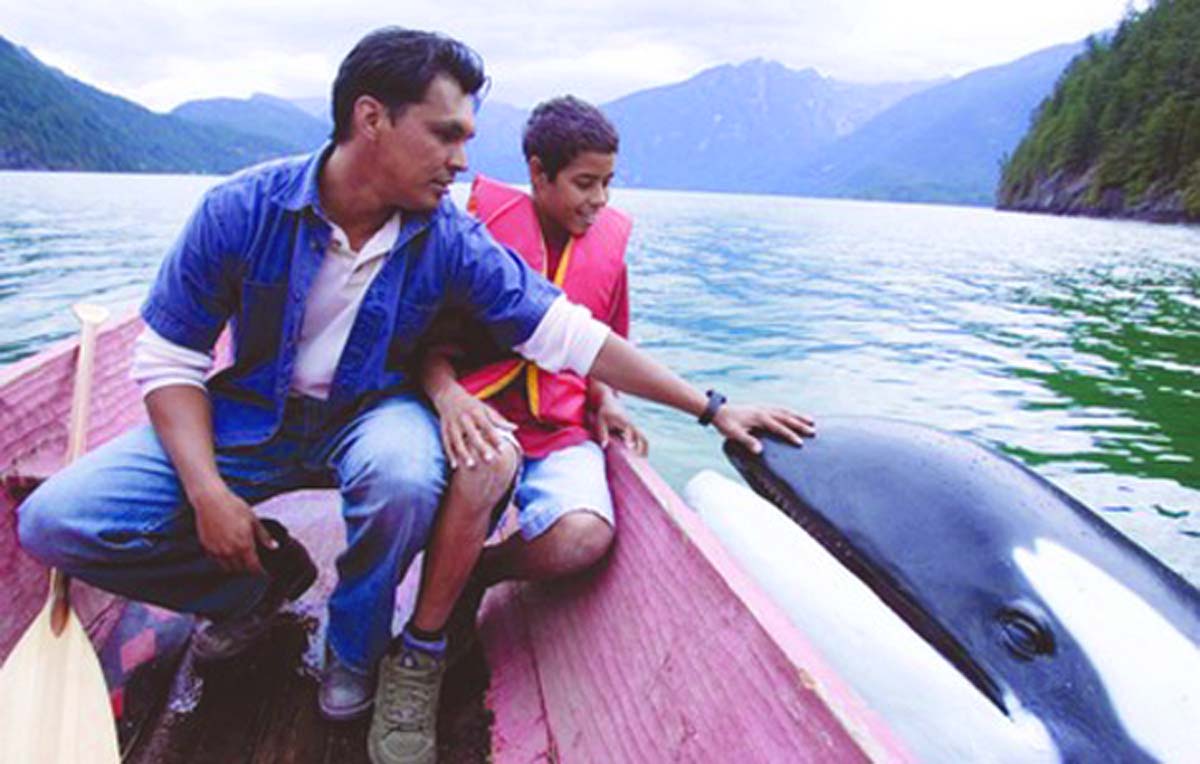 Adam Beach, Aaron Miko in Luna: Spirit of the Whale.

Whale Watching in Toronto: ‘Luna: Spirit of the Whale’

The Toronto International Film Festival for Children will present Don McBrearty’s made-for-television Canadian drama Luna: Spirit of the Whale tomorrow, April 18. Written by Elizabeth Stewart – whose screenplay was “inspired by real events” – Luna: Spirit of the Whale shows “how the plight of an orphaned orca impacts the lives of a man and a boy who are each searching for their place in the world.”

The film stars Adam Beach – who received considerable praise for his performance in Clint Eastwood’s World War II drama Flags of Our Fathers – as a man who, following his father’s death, returns to the Mowachaht-Muchalaht First Nations reserve on Vancouver Island’s Nootka Sound. Once there, he becomes a mentor to a troubled youth (Aaron Miko). The appearance of an orphaned orca (a.k.a. “killer whale”) connects both men to their cultural heritage, with happy results for all involved.

Vancouver-born Jason Priestley (of Beverly Hills 90210) fame plays the role of a cultural heritage-less government official from Ottawa who wants to take the whale Luna elsewhere.

If Luna: Spirit of the Whale sounds like a sort of Canadian Whale Rider-meets-Free Willy, that’s probably no coincidence. But no matter how predictable the storyline, any movie co-starring a whale is worth a look. And as a plus, Luna supposedly boasts excellent underwater cinematography.

Luna: Spirit of the Whale cast

This movie is so wrong on a number of levels. The eeeeeeevil portrayal of a conservation officer, as portrayed by Jason Priestley, is very disrespectful to the men and women in that profession who do a lot to prevent poaching, illegal hunting and fishing, and making sure species are not wiped off the faced of the planet by the greed and profiteering of humans.

Also, and forgive the controversial statement I’m going to make and I hope the moderators don’t censor this comment because both sides have to be stated if we are to claim we live in a democracy: the fact is that Luna may have been able to reunite with her pod and could be alive today if it were not for the interference of the Muchalaht First Nations who claimed her to be the spirit of a god.

Treating Luna like a domestic pet caused her to become dependent on human contact which eventually let to her demise. If the Muchalaht considered her the spirit of a god then perhaps it would have been better for Luna if she had been worshipped from afar.

Regardless, this TV-movie is one-sided and exploitative and, in typically apologetic Canadian fashion, is obsequious to the First Nations people.

Hi! i am doing a report on the wizard of oz for my 1930’s report project for my Enlish class and I just wanted to say that this is really interesting and I think the person should give them back i mean really because there is a 1 million dollar reward! I have learned so much about the movie than I knew before. Its AMAZING!!!!!!