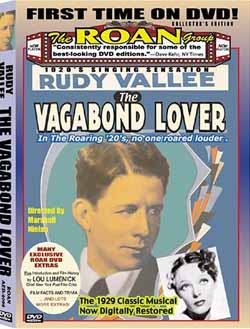 In the U.S., Turner Classic Movies will be showing three early talkies:

The musical The Vagabond Lover, starring the Elvis Presley of the late 1920s – in terms of popularity, that is – Rudy Vallee (if Elvis suffered from paralysis, he would have sung the way Vallee did). Also in the cast, future Academy Award-winning box office superstar Marie Dressler, and Loretta Young’s sister, Sally Blane. The director, Marshall Neilan, guided Mary Pickford in numerous silent films, and was one of the top Hollywood directors of the 1910s and 1920s. Neilan’s alcoholism, short temper, and animosity toward MGM honcho Louis B. Mayer helped derail his career.

The Vagabond Lover will be followed by another early talkie directed by Neilan, Tanned Legs. This little-seen comedy also stars Blane, along with June Clyde and Arthur Lake, best-known for playing Dagwood Bumstead to Penny Singleton’s Blondie in the popular B-comedy series at Columbia in the late 1930s and throughout the 1940s.

The equally rare Spring Is Here will follow suit. This 1930 musical stars Bernice Claire – a Broadway import and potential Jeanette MacDonald who didn’t make it, as musicals quickly became box office poison in the early 1930s.

Has anyone seen the DVD of “The Vagabond Lover” and care to comment on the quality of the DVD? I didn’t tape the film the other day because I have the DVD in my Netflix queue and decided to save the VHS space.

I’ve read alot about Marshall Neilan as a director of Mary Pickford, but he also appears in Gloria Swanson’s autobiography Swanson on Swanson.
Good luck screening the film; the director is interesting.

I’ve only heard Nick Lucas once, in “The Show of Shows.” He was fine in that.

My VCR is already set. I have to admit, I don’t find Rudy Vallee that bad of a singer. He has a pleasant enough light tenor voice. Although, of the other male vocalists of the 1920’s, I much prefer “Whispering” Jack Smith, Gene Austin, or Nick Lucas. But, I guess I have a sort of nostalgic appreciation for Rudy Vallee. He’s synonymous as the quintessential 1920’s crooner, and romantic idol to young girls. I guess the (double gasp!)same position that someone like Justin Timberlake holds today.

Actually, I think Vallee developed into a better singer by the 30’s and 40’s. His voice seemed to have gained some weight and color and he seems less nasally in those later records. Not sure if that was actual vocal development on his part, or just the consequence of better recording technology.

Off-topic, but I think the Columbia Blondie Series went into the early 1950’s.