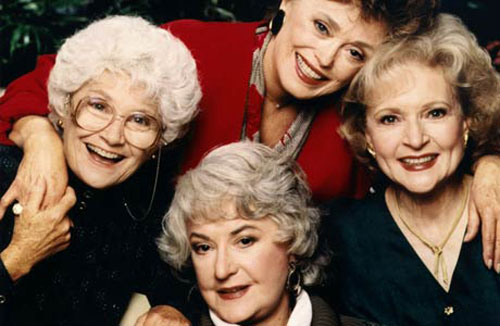 Rue McClanahan, who won an Emmy for her hilarious Blanche Devereaux in the television sitcom The Golden Girls, died today following a massive stroke. McClanahan’s son reportedly took her off life support. She was 76.

The Golden Girls, which co-starred Bea Arthur, Betty White, and Estelle Getty, ran from 1985 to 1992. McClanahan won her Emmy in 1987. I usually find television sitcoms, no matter how “witty,” all but unwatchable. The Golden Girls was a rare exception; one in which just about everything – acting, direction, script – worked flawlessly.

Though mostly a TV actress, McClanahan (born Feb. 21, 1934, in Healdton, Okla.) also appeared in a number of big-screen releases, usually in small roles, from the early ’60s to the mid-2000s. Among those were Anthony Harvey’s They Might Be Giants (1971), starring Joanne Woodward and George C. Scott; Martha Coolidge’s Out to Sea (1997), with Jack Lemmon and Walter Matthau; and Gary Don Rhodes’ Wit’s End (2005), with Udo Kier.

On TV, she also had a supporting role in the 1970s sitcom Maude, starring Bea Arthur; played the old Billie Burke role of Clara Topper in a 1979 remake of the supernatural comedy classic Topper (1937); and co-starred with Betty White and Estelle Getty in the short-lived Golden Girls’ spin-off The Golden Palace in the early 1990s.

More recently, McClanahan had a recurring role in the series Sordid Lives.

As quoted in The Associated Press’ McClanahan obit, White, the only survivor among the four Golden Girls actresses, remarked: “I treasured our relationship. It hurts more than I even thought it would, if that’s even possible.”

I just read about the death of this great lady tonight on internet. It was a shock to me. I watch all of the old movies of “The Golden Girls” every night and have always loved them. My precious first Granddaughter, who was murdered three years, ago loved their movies. She had purchased almost every movie they had ever made. I’m sure she would be devastated over the deaths of all three of these great ladies. This is so sad!!

My heartfelt sympathy to her family.